I’m really sad that Ducktales will be ending in 2021. It was a great show! One of my favorites ever (Next to Pokémon of course). It was show not just for kids, but for the whole family to enjoy. It was even the first show in the Mickey Mouse franchise to animate Huey, Dewey, and Louie’s mother Della Duck, who up until now has only appeared once in the Donald Duck Comics. I really like Della’s character, and I really hope she’ll appear in other future Mickey Mouse Media. Same goes with Webby! But let’s really hope that this will one of those shows that goes out with a bang. Not one of those shows that ends with a cliffhanger!

Regardless of what the finale will be like! Let’s not say “Goodbye to Ducktales”, let’s say “Thank You Ducktales!” After all, it’s reminding us of the importance of family especially during these difficult times.

I keep seeing people talk about how it wasn’t that journalist’s place to reveal the Ducktales cancelation, and how he sent the fandom into a panic and forced the Ducktales crew into revealing its end before they were ready etc. etc. and like I get where they’re coming from…

Disney has a history of just not telling us.

Will Milo Murphy’s Law ever get another season? Very unlikely. Has it been officially canceled? Nope

Maybe they would have told us, but it’s just as likely that they wouldn’t have. And as upset as I am over Ducktales ending, I’d much rather know it’s the end than be stuck in a state of limbo, not knowing that I’ll ever get another season but unable to give up the hope that I’ll get to see the character’s I love so much one more time. Which is exactly where Disney wants you to be. Cause it keeps us hovering around them in the hopes that we’ll get more, instead of moving on to another thing after a clean break.

Disney is not immune to ✨manipulation✨

#ducktales 2017, #ducktales, #dt 2017, #ducktales spoilers, #ducktales cancelled, #vent, #Fuck Disney but the way, #so anyways, #if you’d like to sign my petition to steal Donald and his boys from Disney’s grubby little hands you’ll find it-, #fox talks
47 notes · See All
dewey-ing-itText

Yes, I’m devastated. We all are. But good things always have to come to an end. Writers like Matt and Frank know when they’ve peaked, and they’ve done more than that as of late. They know that they can do no better, and that’s valid. It’s a kind act to us as fans to end the show before it gets “old” and/or “bad”.

Imagine a show such as Gravity Falls continuing for multiple seasons after S2? Can you do it? No. Nor can I. Alex Hirsch knew that he could do no better after season 2, and he chose to stop for the sake of the show and it’s fans.

This is what Matt and Frank are doing, and I applaud them. If there were a fourth season, I guarantee there’d be “fans” complaining after each and every episode.

*insert character here* had no character development in this series!

Bring back the good writers!

You catch my drift?

I wouldn’t want anything like this to happen to one of my favourite fandoms, but I feel like we’re on the verge of it happening if it were to continue.

Like I said, we’re all sad at this time; that’s valid. However, don’t cry because it’s over, smile because it happened! The fandom will continue as long as there are fans that believe in it! Cosplayers, fan artists, fanfic writers, voice actors, impressionists, Etsy/RedBubble businesses. They will live on!

This is, by far, the best reboot of a show I have ever seen! Intricate plot lines, comic-style art, incredible voice actors, relatable characters, hilarious and heart wrenching moments, and Mr Donald Duck.

This has been the wildest adventure ever.

Thank you, Frank and Matt.

💔 Ducktales  Has Been Cancelled (CONFIRMED BY DISNEY) 💔 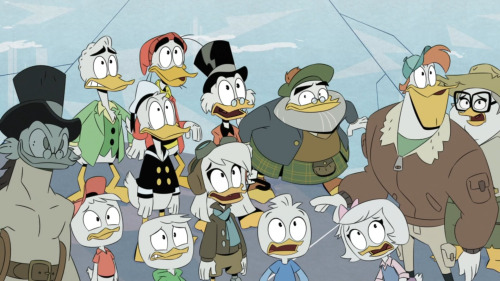 Listen, Ducktales has canon gays, you can’t tell me they put that much gay subtext in Scrooge and Santa’s relationship by accident.

We don’t talk about this enough…

Scrooge McDuck and Christmas Specials always reveal so much potential because of so many factors, like:

- the fact that he’s named after Ebenezer Scrooge

- the fact that he’s generally depicted as greedy miser, so on Christmas he can be shown to be more generous and friendly

- the fact that he’s Scottish and in Scotland Christmas celebration was forbidden for a few centuries, so for him doing the actual celebration is kind of a big deal

So many interesting things, but from what I’ve read about How Santa Stole Christmas and from I’ve seen so far (I’m 7:03 minutes in), I don’t think they utilize it well.

okay so we all agree that santa and scrooge were more than bussiness partners at some point, right-

And now, a fun present-delivering montage set to “Jingle Bells”!

Webby was a lot of fun throughout the episode! It was cute and funny to see her harboring the same vendetta against Santa as Scrooge; like uncle, like niece. It was also adorable to see her become fond Santa the more time she spends with him. And the part with her giving Violet and Lena good night kisses was absolutely adorable! I couldn’t help but geek out about it! >v<

The entire scene with the triplets meeting the reindeer was too adorable for words! >v<

I didn’t think Ducktales could get any better but man How Santa Stole Christmas was a wild ride. Bonus points for the Christmas outro!

I didn’t think I’d come out of 2020 Shipping Scrooge McDuck and Santa Clause but here we are. Thanks Ducktales 2017 reboot

1. Webby will NOT fucking hesitate. XD

2. Disney XD On Demand, why didn’t you play the Christmas version of the theme?! The actual channel did so during the premiere of this episode!

Dont have the ac sorry