okay but ellie waking up after a bad dream & abby comforting her. the grounding weight of her straddling ellie’s thighs as she rouses her to consciousness, abby’s gentle fingers wiping her tears away…

I WROTE ANOTHER CHAPTER!!!

Thanks to @stop-right-there-criminal-scum for making this render tho and her permission to use this XD. I just mixed them like I mix my salad. BYE

oh yeah and that movie is really there. It is an Australian movie. The movie and the game were out in 2020 xD 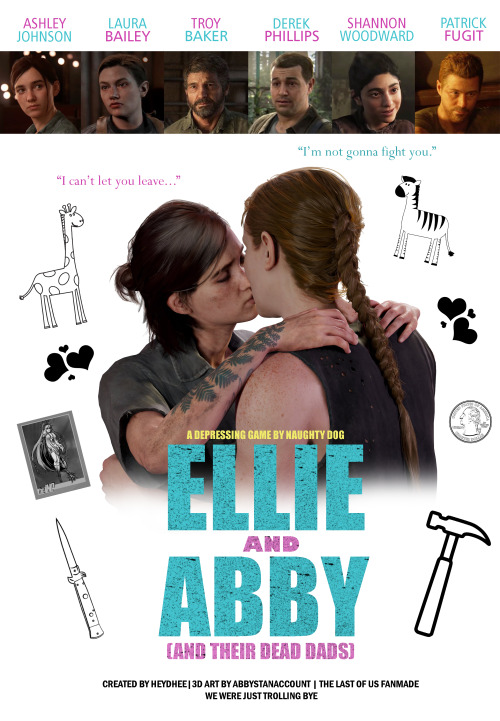 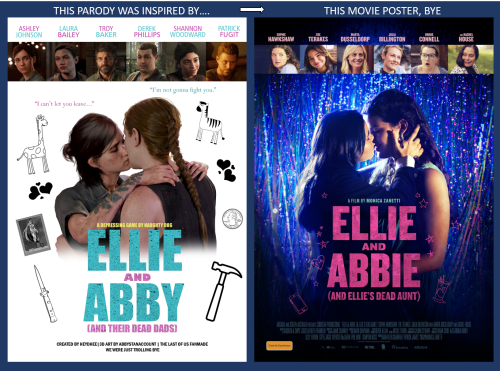 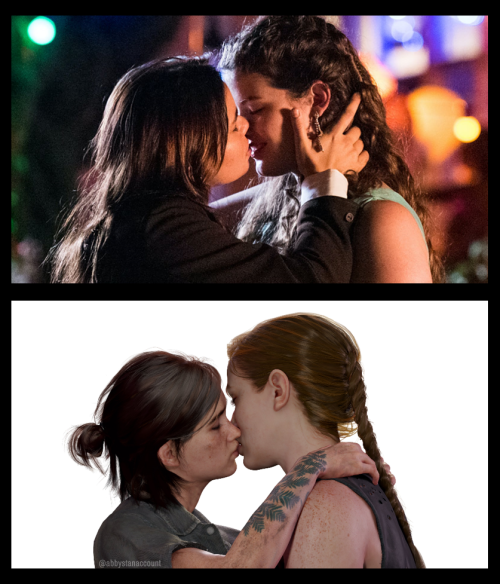 MORE ELLIE/ABBY CONTENT because I physically cannot stop! Please help! Its a modern au, butchy bffs to lovers, smut. Its 11k of that, I can’t sell it to you any better

(you gotta' believe me when i tell you) i said i like it like that - Isolatedwriting - The Last of Us (Video Games) [Archive of Our
An Archive of Our Own, a project of the Organization for Transformative Works
archiveofourown.org
#abby anderson#ellie williams#ellabs#ellie/abby#ellie x abby#whatever our tag is#OH AND TRANS ABBY#because i talk a big talk but havent written it yet#and we deserve#honestly tho i love this au#this fic possessed me it could have been LONGER i had to stop myself#my fics
10 notes
grace-yuyu
Text

Fandom : The Last of Us Part II

It was another Christmas morning for Anderson family, and Abby wished she could open her Christmas present earlier. NON-CANON.

or if u have any prompts send them my way

all i care about is talking about abby/ellie.

and by talking about i mean writing novel length dissertations on why i believe watching their morals fail even more and them descend into mania together by consummating their confusing relationship in blind rage is a ✨crisp✨ dynamic.

Okay I made a sideblog just for tlou to advertise that im writing again, so please talk to me about ellie/abby and maybe read my fic if you’re into that

I’ve been drawing them for some time now XD

i posted this before but as a reblog, and i really want to contribute to what little content for ellie/abby there is out there, so 😭 here it is again, this time for the tags!!

honestly the context of abby and ellie’s world means it’s actually pretty easy to imagine a situation where they might end up having to work with each other to survive and therefore maybe slowly learn to see each other as human beings rather than monsters. we’ve seen from abby already that she let go of her hate by the time ellie finds her on the pillar, enough that she actually, in a way, trusted ellie not to try to kill her. and sure, ellie fucks that over, but if abby has already learned, twice over, that being angry and hating someone is just not worth the energy investment why couldn’t she again

and on the other hand, for ellie, well. not only has she also made the choice that she didn’t want to waste her life being angry (by speaking to joel that fateful night and letting abby and lev go), but look at it this way: what the game asks of the players is, is it possible for you to witness someone do something so horrible that you hate them for it immediately, but as you spend time with them, learn their story, is it possible for you to understand their motive and have empathy for them? is possible for you to, even, by the end, like this person?

so why would this be a weird or impossible concept to apply to abby and ellie? if anything i think the game makes a point of letting us know they COULD be friends. so even if you dont ship it (understandable – though i wish the fandom had a more open mind about what most of us mean by “shipping” because it isnt “fall in love, get a house, and live happily ever after”, more like “this person hurt me badly but is also the only one who understands how consuming my anger and desire for revenge was, and how futile it turned out to be; its so lonely living with all of that but they get it and around them i dont need to pretend i dont carry this weight and they just get it, which is confusing and frustrating and deeply comforting at the same time”) it only makes sense to think it would be possible for them to be friends.

it wouldnt be easy. it wouldnt be instant friendship, or easy friendship every single day, because thats not even how healing works. tlou is very adamant about how you need to work at things. if you want to heal you need to actively work at it. if you want to be a good person you need to actively make good choices. and i think that’s something they both want to try to do so i can imagine a dozen scenarios where they’re in each other’s orbit in some capacity and over months and years get to a much better place

also, a propos of nothing: do you think ellie/abby would be met with so much disgust and disapproval if they were both men? what differentiates ellabs from every other popular antagonistic m/m pairing? lets think about that shall we :)

#ellie x abby#abby x ellie#ellabs#tlou#tlou 2#im having some feelings tonight and they are still gesturing wildly at this^#i hate that i have to feel ashamed for being interested in their dynamic#like its not the most interesting dynamic of the whole game ON PURPOSE#god#also p.s. this does not mean i dont like or dont ship ellie/dina#since that came into question last time LOL
25 notes
heydhee
Text

Fandom : The Last of Us

Ellie, a civilian who grew up in a military family, fell in love with Abby, a Marine. Their relationship was challenged as their different worlds collided on to each other.

Prologue was up on AO3

Abby’s worst nightmare lurks in a Burger King, and hell. She barely even knows what a burger is.

now it grows along the bones 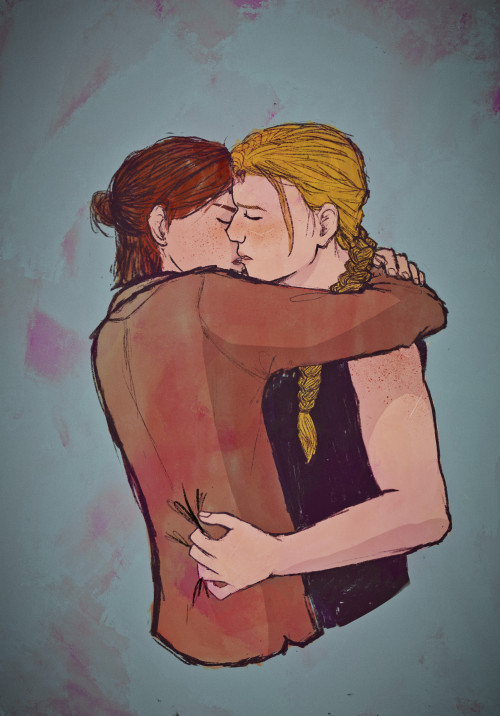 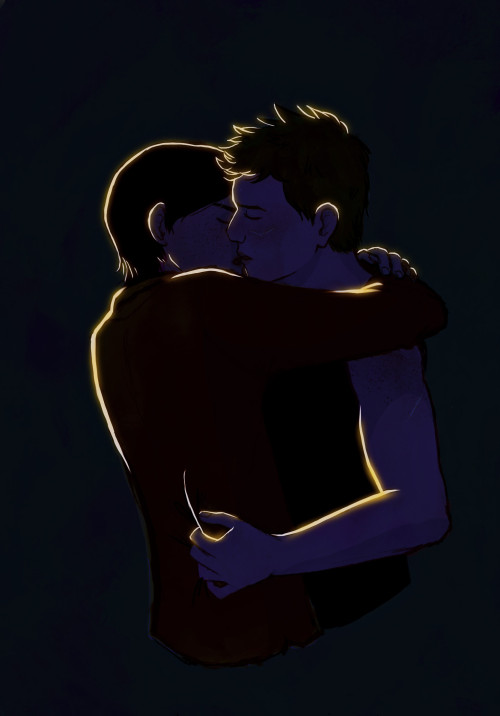 #ellie x abby#tlou2#tlou#abby anderson#ellie williams#my gorls. pensive emoji.#they couldve been... friends... u know#i would like for them to learn to Be#and kiss a lot for bad reasons at first but more and more for good reasons......#my art
95 notes
elliedina
Answer

their guard going down…. it progressing into More….. them sidling into a receded backstage room…..

Am sorry this took so long! Hope you enjoy the read and my ask box is open if you wanna discuss these two further bc these two 💖💕🎸💪💕💖

Q1 has brief sexual content and swearing, otherwise this is all SFW, unless you count the minor swear word in the bullet points (think “female dog”)

Who is the most affectionate?

Ellie. Abby’s touch-starved and inexperienced (and also most of my HCs are cannon-compliant so there’s also the Rattlers) and Ellie takes great pride in how she’s able to treat Abby so gently while also managing to absolutely fuck her brains out. They are a very affectionate pair overall though, they express an awful lot through gentle touch and affection is very much part of how they help each other heal ❤️

The main delay in this reply was finding this one really tough to answer! Because a lot of my HCs are about them immediately post cannon and I think they are kinda done arguing by then, they tend to take a massive step back when they hear the other say something they don’t instinctively understand or agree with and really think it over before responding and so avoid arguments.

Both of them have major self-esteem issues while the other thinks well of them, so that’s a point of disagreement but they don’t have rows about it. (I have recently discovered that using “row” in this context appears to be weird Britishism so FYI row = argument, not boats 😂)

Long-term? I imagine they would be inclined to argue if they felt very differently about something to do with Lev’s safety or best interests because passions for them will run very high with anything involving him.

They enjoy certain types of friendly competition, but only with things where the objective winner will never be clear so they can playfully debate about it and still disagree about it 10 years later.

Their favourite specific activity would be making Lev smile by finding him gifts or fun things to do or finding new things to show him or teach him that he finds interesting. Being mamas is their vocation now. 👩‍👩‍👦

Nicknames? & if so, how did they originate?

They subconsciously started calling each other little pet names. Babe is Ellie’s go-to, and at first Abby copies that but she’s kinda inclined towards nicknames about how she finds Ellie smol and cute. But these are not super well-received! Abs, Ab, Els, and El also. Sometimes with jokes about Abby’s abs involved, but usually just for being shorter.

It’s not necessarily a HC but I can totally picture this happening:

Who reaches for the other’s hand first?

Abby. They hold hands a lot when they are alone, but it’s a while before they decide to tell Lev they are a couple (bc they are silly enough to think he hasn’t already known for ages, which obviously he spots it right away). They seldom walk around holding hands, though, bc they both stay kinda combat-ready with their hands free to shoot and fight, even in places that seem semi-safe.

Who says I love you first?

Ellie. She’s not quick to say it, but between the two of them she’s fractionally more comfortable with expressing romantic love when they get together. They’ve loved each other for a long time before they say it, though. Abby says it right back to Ellie as soon as she does tho. Ellie doesn’t plan to say it, but she’s feeling sleepy and affectionate in bed one morning and it slips out.

AN: As soon as I finished this, an old Pulp song called Something Changed popped back into my head. It might make a a good accompaniment to the fic, though lyrically it’s mostly way off base so there’s an argument either way. If you try it, do feedback. Either way, enjoy.

Those words ringing into her ears made her stop walking away, turn around, and reconsider.

“You wanna stay?! After this, you still want to fucking stay here? What would you have us do? Fight all day, pass out each night and then do it all over again? This bullshit is over!”

“I agree, this bullshit IS over.” She replied, and yet the next thing she did was grab her adversary, grasping around her arms and then shove hard enough to throw her to the ground.

“After I spared your fucking life? After you spared mine twice, now you decide to kill me?” She snarled.

“No,” came the reply. “I’m not.” Then she expanded on her reply by kissing the snarling mouth underneath her. She wanted to fuck her there, pound her into the sand while the salt in the ocean lashed at them both. Love could cleanse them yet. But she didn’t, not yet, because some things matter more.

Abby threw her nemesis over her shoulder and placed her in the boat. Had it not been for Lev, she’d have trusted that the one kiss would be enough, but she wouldn’t countenance any risk to him so she tied Ellie’s wrists behind her back for good measure.

Something had already changed, though. Abby could feel it from the lack of resistance she faced tying the knots. And Ellie could feel it from the careful, complicated work going into tying her up, and from the finger slotting inbetween her wrists and the rope, checking it wasn’t tight enough to do her damage. That wasn’t how you tied your enemy, it was how you’d tie up a lover.

Things will never be the same again.