X is performing tonight we should go see y.

This is z pencil we should give it to y.

X doesn’t see yself as a man or a woman, but does identify with femininity and the term “demigirl”.

If you dated y, x’d be your datemate, not your girlfriend. X might not mind being called your girlfriend most of the time, but every once in a while, it would make y very uncomfy, so it’s better to use a term x’d be comfortable with all the time.

Trynna get approved by Onlyfans, no luck so far, woop woop 🤙🤪 have a pic~

“Growing up in white spaces, colonised spaces, the idea of queerness is a white one, and it’s linked yo colonialism, and therefore linked to capitalism. It makes people digestible and categorisable, and capitalism being colonialism puts us into these two boxes, and so therefore it asks people of the queer identity to need to announce themselves and to come out … It is inherently a white framework and a white process of queerness … For POC especially, it can be dangerous and harmful and really damaging to their experience of queerness. If we are have to work within those kind of processes.”

Dysphoria: you’re body is shit. Your parts are wrong and no one will ever think you’re anything but a woman

Me: yeah, probably. I could try wearing more masc clothes and trying to have more masculine body language though!

Dysphoria: how fucking dare you not put effort into feminine beauty standards. You look like shit. Go put on a lower cut shirt. Your tits are the only attractive thing about you

Me: damn you right

#anyway i dont normally get a whole lot of body dysphoria but whoo is it kicking my ass today, #trans, #enby, #nonbinary, #dysphoria, #tw dysphoria
5 notes · See All
hooligans-and-hellionsText

I got a binder! Hahaha it just has to mail and then BOOM HAHA! I am very happy haha.

me, looking at boxers: mmmm want …

some loser: what? you can’t have BOTH what do you actually want??

#i had this stupid idea for shitpost and knew it would be better as a comic so i had to make it as a comic, #it was better in my head, #comic, #just me, #enby, #doodles, #gay, #not undertale related but had to blog sorryy
3 notes · See All
smallwoollymonsterText

Hi. I’m Demi and I’m genderfluid. All neopronouns are valid including nounself pronouns!. Why am I making this post? Well, I was on a tiktok about enbies and so many people were talking about how they will use they/them but not neopronouns which makes me sad as I use neopronouns(xe/xem/xyr). So, I want to explain some things. -Nounself pronouns do not mean that they identify as the noun. For example, if someone use starself that does not mean they identify as a star. It’s just a way that they feel expresses their gender. -neopronouns are created by neodivergent people so not only are you being transphobic, you’re also being albiest. -If you’re not neodivergent, you can still use neopronouns, they were just pronouns created by nonbinary neodivergent people who want pronouns that describe their gender more correctly -No neopronouns are used sexually, and if they are, then they shouldn’t -No, we do not use neopronouns just to be “qUirKY and dIffErenT” -Yes, we do have gender dysphoria(which is the only thing you need to be trans) -No, we don’t care if people think we’re weird

Also, as a sidenote, people who use he/him or she/her and aren’t male or female are valid too ^^

That is, what are these genders? Do they actually mean that you identify as a star or cat? I’m so sorry, I’m just confused because all I see about them are people shitting on these kind of gender and I just want to learn about them.

Nonbinary people seeing an inanimate object with a cool name 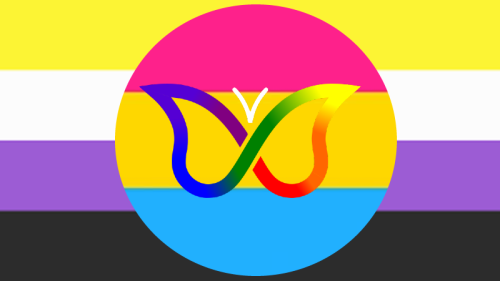 My Headcanon for Yang!

credit if you use!

let me know if you have any requests!

U can use binary pronouns n still b nonbinary

Exclusionists, its not tht hard

#nonbinary, #enby, #trans, #if som1 uses binary prnouns it dsnt mke thm any less nonbinary, #were not limited 2 only They/them- were not a stereotype!!!, #gender, #journal
13 notes · See All
keegan-gText

Blaire White saying nonbinary people want to destroy the binary is so fucking funny to me. This is the enby agenda.

#bi, #tri, #i mean i wish there was more than just the binary, #because only two genders?, #seems kinda sus, #why make it a nary when you can make it a nary, #genderflux, #girlflux, #paragirl, #nonbinary, #enby, #afab enby, #enby discourse
3 notes · See All
mutechildText

People who use nounself pronouns are so powerful

#just the confidence that they exude, #anyone who uses nounself pronouns is braver than any us marine, #trans, #enby, #nonbinary
3 notes · See All
ophelia-rinText
#enby, #goth, #ophelia, #gay, #witch, #emo, #nonbinary, #pagan, #queer, #lesbian
2 notes · See All
Next Page