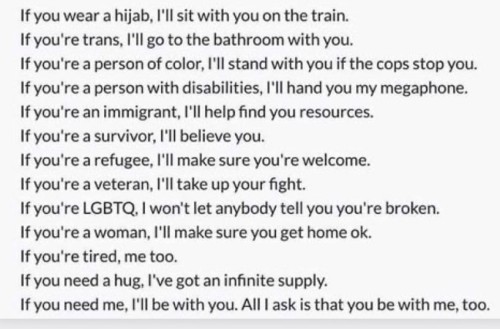 Droids are people too 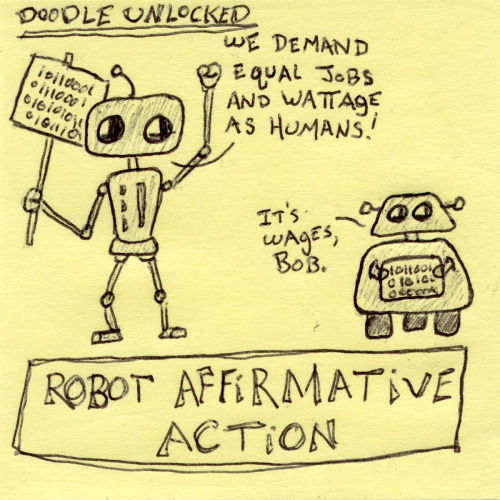 Because I am vague about the specific ways in which social injustice occurs and the problems it causes. If we were to draw a Venn diagram about categories of discrimination these would be the factors that cropped up in most if not all of them. When I am vague about them, it is to draw attention to them seperatley as an issue that needs to be addressed because I believe it can lead to a better society and tackle inequality unspecific to one type. So I will say that being treated as lesser and other for things you can’t control is an issue because it needs to be addressed. This is found in all types of discrimination so recognising it is important. Drawing attention to a feature people are discriminated against in this context is something I avoid as it labels it is as belong to that feature rather than being a societal wide problem which causes hard ship for no reason. Being vague in this context is begnin at worst and at best gets people to see how they can avoid causing people pain by treating everyone as equal. You may take a difference stance to me on this and this is how I see it

When I get specific it’s because I believe we need to call out one type of problem. So sexism treats women as not quite human which is why it can fly under the radar. Women are seen as lesser humans. Racism is where people are treated as non-humans because of the colour of their skin. Homophobia is where people are treated as perversions of the “norm” for who they like. Transphobia is where people refuse to recognise them as anything but their societal assigned gender by their genitial because they refuse to believe that genitals and gender are two seperate and unrelated things. Biphobia is the erasure of bi people as people struggling to wrap their head around the concept that you can like multiple genders without being gay or straight. This needs to be specific because it is clearly specialised to each way of discriminating.

However this way also erases types of discrimination we have yet to encounter. As someone who cares about inclusivity I will also be vague so everyone feels included and everyone feels able to specify their issue. The problem of being specific is that it excludes some so I feel it is okay to be vague

At the same time, you can be vague in a straight up harmful way. I am vague about which specific category the problem I am discussing belongs to but people are vague about discrimination itself

I am vague to draw attention to all types of social injustice where I see it and I will be vague seperate to people being specific. I will also directly reference types of discrimination when people are being specific. I am being vague to invite people to call out specific ways of discriminating. But this type of vagueness is doing the opposite it.

It is painting a picture of a united world, allowing people to bury their head in the sand and ignore the the world’s problems because there is social injustice and they refuse to face it. They do it to shut down discussions about discrimination because this way they can claim that look we talked about it, why are you causing a problem and talking about the issue when we have already covered it. It panders so as to give an excuse not to discuss it. And that is unforgivable

As a person I hate social injustice and will always fight for equality because that is who I am. My experience has shaped me to be someone who cares immensely about social equality and making sure everyone is seen because I was made to feel lesser and Invisible as a kid so I never want anyone to feel like that

As a white person I don’t feel able to talk about this because it is constantly made out that my race is the problem, that just being white is an issue so I cannot be part of the solution

But that is unfair. Yes it is white people who have done this but they did as part of a need to enforce their superiority on others, they were looking for an excuse and used race as a scapegoat. This led to white supremacy which is the issue.

It is what is used to justify treating someone badly because of how they look. And it makes out that white people are superior. It is a systematic issue as it was woven into our societies and has hurt so many. But everyone acts like the race itself is the issue.

Anyone is capable of helping sustain white supremacy no matter their race and whilst white people are the most blind to it, this is because of their experience and perception bias rather than being an inherent problem with their race.

By acting like it is just something that comes with being white rather than questioning why that it is and pointing to a society in which white people are treated as superior as the issue, it discriminates against people because of their race

It is nowhere near as bad as racism towards anyone of colour but it is still an issue. Because it hurts and people should be able to talk about and address issues without being ashamed because of their race.

White people are just people, white supremacy is the issue.

Also to anyone who questions how I a white person could have been treated as other as a kid, this is what I am talking about. My race protects me from racism

But there is more discrimination in this world than just one type. People will be discriminated against for being other whatever that maybe which is why I hate social injustice and why I will fight against it wherever possible. The specific reasons why I was discriminated against does not matter, except when focusing on them specifically, because all that matters is that I was treated as lesser and that people treated me badly

The Foolishness of Our Faith

The Foolishness of Our Faith

Paul is writing to the believers at Corinth to encourage unity through maturity in the faith (v. 10). He is writing with unity as his goal because there are divisions in the church (v. 11-17). Jesus made Paul an apostle and sent him to preach the Gospel, not in cleverness of speech so that the cross of Christ would not be made void (v. 17). Why is the Gospel of Christ not proclaimed in cleverness…

Biden Signs Series Of Executive Orders On Racial Equity | Morning Joe | MSNBC
Category Main
Description:
President Joe Biden signed four executive actions Tuesday aimed at advancing racial equity as part of his push to use the powers of the presidency to …
TopTrengingTV Hunting the most trend video of the moment, every hour every day 24/7.

Feel free to either reply to this post or shoot me a message! Any recommendations are welcome!

Men should receive priority vaccination from COVID over women and you can’t change my mind.

Can we fucking stop being sexist toward men?

All these ‘i like women cuz theyre great, i like men cuz i make bad decisions’ or ‘oh all men are rapists’ or ‘men have to bow to me cuz im a girlboss but if they’re a boss they’re sexist’ posts just really get me fired up.

As a WOMAN, I think men can be wonderful just like every other gender. We need to stop telling them they need to show emotion then bashing them for acting ‘gay’ by showing them… like what the fuhk?!

We need to stop telling them they’re now inferior because some old straight cis white idiots were men and had power over the world at one time.

Sure, if he’s an asshole treat him like one. But the same goes for women and enbies. We need to stop hating men and putting them down.

I believe we’re all equal. E-q-u-a-l. Meaning one gender isn’t better than another. Including women. You can be a boss, you can be badass, you can be sweet, emotional, funnny, whatever personality traits you have. No matter your gender. Isn’t this the agenda us feminists have been trying to show the world? That women deserve equal respect to men? Sure, we’re not the same, but we all deserve love and respect.

Women were mistreated, now that equality has leveled out a bit I don’t think we need to make men suffer the same way we did.

Hope you all have a good day, xoLex

Ladies and gentlemen you can hint ask you , but do not blame your partner for their lack of telepathy. Some times, just ask. Communicate. I don’t care how embarrassing it is or how much you think the other person should just “ know” good to treat you. Say it out loud, your communication will help you both grow so much.

And also a little warning, if you’re asking for things, events, or serious questions; give your partner time. They may need to save up for what you asked for, they need time to plan an event, and they need time to answer you and know that answer is well with their heart.

For those being asked (the givers) don’t be angry when something is asked of you. Try to understand first. Maybe they need one thing but only know how to express it in a way you felt to be rude. If it’s too much for you, explain why and offer a compromise or even just a “I’d love to for you, but I can’t”. Again, the more you talk things over the more you will understand, grow close, and being to learn each other’s language.

P.S. Men can ask for things too. Men can be treated and cared for too, and deserve to be. Relationships should have equal members. If one can ask then the other can too. Same with you both being givers. 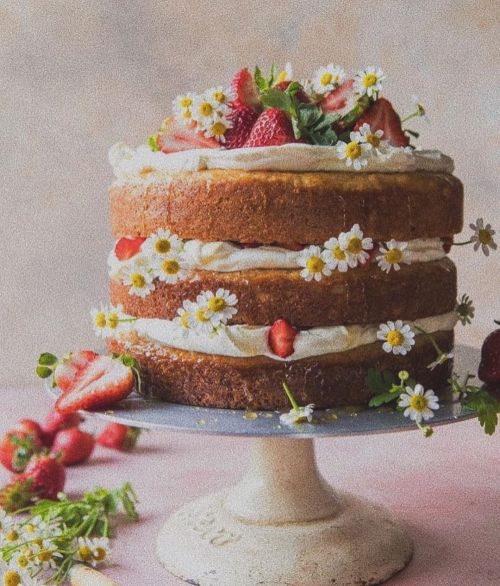 Please remember to be kind, respectful, not homophobic, not racist, not sexist, not misogynistic, and not transphobic <3 everyone is allowed here as long as you are equal <3