“I’m gonna guess that’s someone else’s blood. Am I right?” Alan’s eyes briefly glance at his husband’s ruined attire. Focused more on the pool of blood slowly forming on the hardwood floors. There wasn’t enough hydrogen peroxide in the realm for the trails that Eric brought home with him.

“Right as always, luv.” The dark red pool slowly spreads until it hits one of the protective barriers Alan had learnt to keep around at all times- a line of connected towels surrounding the door way like a paved path that led straight to the bathroom. There’s always so much blood.

Kiki’s Delivery Service AU ft. flower language and Jiji-but-not-Jiji. Alan has a plant he needs to get across the river. Eric has a boat.

“Hmm…” Alan’s attention had now shifted to a single blossom, one that landed in his lap. He picked it up gently by the edge of its stem, observing its fragile details. “These are cherry blossoms. Did you know they actually mean something in the language of flowers?”

“No, silly!” Alan chuckled. “It’s sort of like a secret code. Different  flowers can be used to send messages, which is why people like  delivering them to others. Cherry blossoms mean fragility — and the transience of life. Because they’re really fragile, and they can be swept away at any moment…much like how life can take you just about anywhere at any time.” 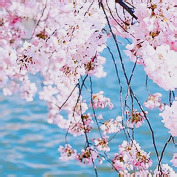 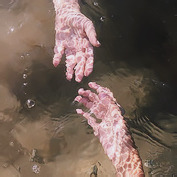 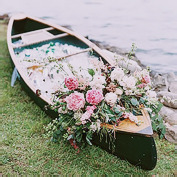 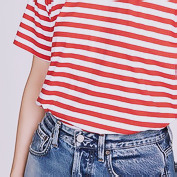 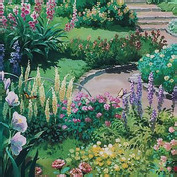 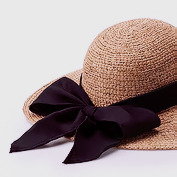 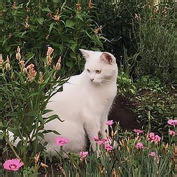 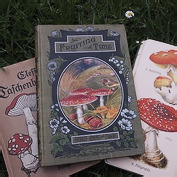 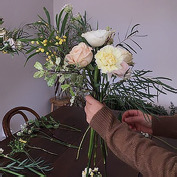 Eric attends a human ball with the intention of expediting his harrowing bid to save Alan’s life, when he’s intercepted by Alan himself — and a song.

Alan turned to face Eric, arms raised carefully to wrap around his partner.

“Other way,” he chuckled, as Eric raised the wrong hand to the back of his shoulder blade.

“Slip of the wrist.”

“I would’ve expected better from such a handsome nobleman.”

“Ah, cut me some slack. Didn’t exactly come prepared to court such a bloody fine reaper.” 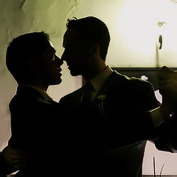 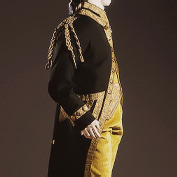 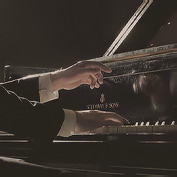 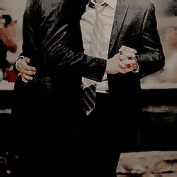 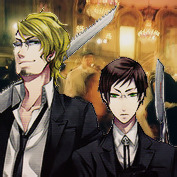 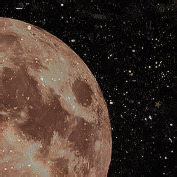 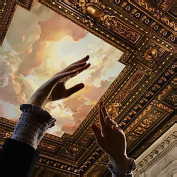 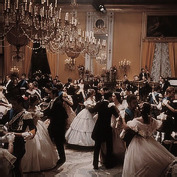 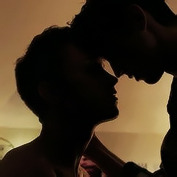 frankenstein’s monster and his groom; have some halloween slingphries! 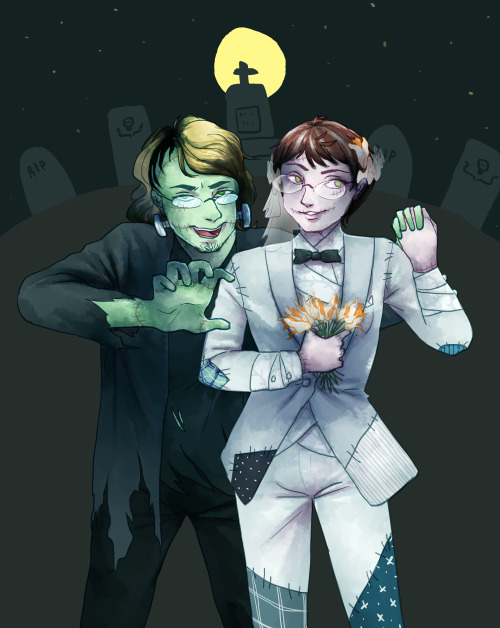 Fandom: Kuroshitsuji: The Musical, The Most Beautiful Death in the World
Genre: Romance/Angst
Rating: PG for now, will go up after the first chapter.
Chapters: 1/3
Word Count: 5,048/18,000
Pairings: Eric/Alan
Trigger Warnings: Frequent mentions of death, per standard for this fandom.
Summary:  While their secret after work get togethers have become a source of comfort for Alan, there’s one subject that’s off-limits. When he decides to push the boundaries, he drives a wedge between himself and Eric that might lead to a new understanding of why he pulls away.

The world is condensed in the nooks and crannies of Alan Humphries’s small flat. The remnants of everyday life are scattered across shelves and side tables, pieces of art and trinkets that have been acquired here and there, or brought home when someone else has abandoned them in the Dispatch’s Lost and Found for an indecent amount of time. His entire home is decorated this way, as if life had just sort of stumbled through the front door and made itself at home.

But for Alan Humphries, home was not defined by the things in it so much as the atmosphere that fills the rooms. On nights like that, that is made up of warmth, companionship, and badly made tea. The living table in the drawing room was covered with folders, papers, and hand-scrawled notes on scraps of both that were meant to be placeholders. Spaced throughout were a pot of ink for the fountain pen Alan insisted on signing forms with, two teacups, a plate of well-ignored biscuits falsely claiming French origin, and at least seven individual ledgers, not even one opened.

Despite the neglected action abandoned on the coffee table, the remains of the fight with bureaucracy were still evident on the laps of the two men sitting on opposite twin sofas. Alan’s collection of forms was made up primarily of the delayed filing reports that had been accumulated during the last three and a half weeks across their entire department. Eric had done the brave thing and volunteered the task of reviewing weekly complaint forms, most of which dealt with Grell, but all of which still required summarizing, cataloging, and some form of response. While work was the focus, the tasks were made easier by the quiet comfort between them, highlighted by the crackling of the warmth of the logs burning in the fireplace.

Few people relished taking their work home, but this was the part of the week Alan looked forward to most. On occasion, he would even slack of slightly at work just to make sure there was still something to be done, even though the very effort of doing so went against his grain. Even then, these nights didn’t always go as planned. Sometimes they would fall by the wayside as he dealt with the effects of his disease, or Eric might bow out after finding himself preoccupied with parties or whatever else it was that he got up to outside of the office. But when they did happen, these nights were what kept Alan going. They were why he had never requested a transfer to a desk position or a quieter office. After all, neither of those would have made for such good conversation.

“Bloody hell,” came the expected commentary from the opposite couch. Eric held up one of the complaint sheets, squinting at it to make sure he was reading it correctly. “I’m used to the sexual harassment complaints from the men about Grell, but I think this one’s actually from a woman.”

Keep reading over on AO3!

At the moment, I’m neck deep in another story for Eric/Alan from The Most Beautiful Death in the World, also known as the fandom the rest of the fandom forgot about. The story in question started off as a one-shot, but I’m going a bit off the rails and winging it (SHOCKING!) as a three-parter.

There’s part of me that’s rather sad about that, if only because I’ve essentially ditched more than half of the original plans and I rather like a description that was used in them. Eric Slingby recalls the first time he met Alan, and describes him as looking like he was ready to “take on the world one book report at a time.”

Maybe I’ll find a way to keep it. Maybe.

A lot of middle/high school obsessions don’t tend to hold up well after a few years and kuroshitsuji does have Quite a Few issues but man I just watched the second musical again and god I lose it over Eric and Alan’s story just as much as the first time I watched it… The absolute tenderness of their interactions.. the longing.. the tragedy.. the devotion…… poetic cinema

#yes its been like 10 years no im not over it, #drews life, #slingphries, #eric slingby, #alan humphries, #kuroshitsuji
22 notes · See All
noroomforcreamText

#eric slingby, #alan humphries, #black butler, #kuroshitsuji, #kuromyu, #my favorite boys..., #i just rewatched this musical today, #after like six years??, #and i still and will forever love it wholeheartedly., #i will resume my usual dc content after this, #but i needed to get these two out of my system
19 notes · See All
nitchenText

I’m sitting in class and just think about Slinphries~

So I have a Slingphries fanfiction idea:

Alan has cerebral palsy, and is going on some kind of punk festival with Grell and Othello, who are his friends. He’s sitting in a electric wheelchair and is just….just vibing.

Eric is also there and he’s heath care worker so he knows how to treat disabled people right and how the people welcome Alan on the festival isn’t that great - there some insults, some looks…and the blonde one goes to him while Othello and Grell are looking around and having their fun, but Grell always has an eye on her best friend. Although he’s with a complete stranger and she doesn’t know if he’s friendly to him or not.

But Eric is the sweetest person alive to Alan and he pushes him tough the whole festival area, they talk and everything’s cute and sweet…

Sebastian smiled at the damned fallen reaper as Eric scrambled to get away from the thousands of unfortunate souls, decayed, moaning, crying, reach out, clawing their way to do to him what he has done to them.

Eric desprately tried to climb a rock formation behind him, fear in his eyes, yet the stone and rocky cliff scalded his hands from sudden contact making Eric shriek in pain.

Whilst his hands burnt and sizzled, the decaying crowd pulled him off of his feet and drag him into molten fire and lava, tearing whatever flesh a hand caught. His squeals only reached uncaring ears.

Sebastian walked toward Eric, gripping his chin firmly, his truer form now showing. “You fool. You brought this on yourself, all for one dying reaper. Noble but all for naught.”