That little smile Zack gives Angeal when he refuses to fight && defend himself.

.here the time stands still beside a cuppa coffee.

Season 6 AU where instead of Blaine dating Karofsky, he’s with Sebastian, otherwise known as Kurt’s worst nightmare. Kurt’s devastated, but he quickly learns the pain runs deeper than his own feelings of regret. Will Kurt be able to fix what was ruined during their second breakup, or is he destined to lose Blaine to Sebastian forever? Canon divergent, Season 6 rewrite.

#this is a big one, #I may have cried writing it, #it's fine, #everything's fine, #PLS READ, #klaine fic, #klaine fanfiction, #klaine fanfic, #my fic, #a safe place
2 notes · See All
chocolatemperorText

#Yes I am watching chopped after hours at 3am, #Yes I am only slightly in love with her, #Everything's fine, #Chopped, #maneet chauhan, #Food network, #Shut up eryka, #Literally everytime I see her I think this and oh my God it feels good to get it out, #This is going to be one of those posts where everytime I have the thought I will reblog, #Anyways I'm gay
45 notes · See All
riylcastText

At 19, Jamie Drake was sure that she was too told to break into the music business. Nearly two decades later, she officially has, with the arrival of Everything’s Fine.

There was music in the meantime, of course, but the singer-songwriter is confident that she finally found her voice of what’s been deemed her debut LP. And indeed, she’s in fine form, as both writer and musician.

On a trip to New York, the Los Angeles-based musician sat down to discuss the road that brought her the debut, and how she learned to stop worry and love simply love the music.

Probably going to delete this later, but can someone please tell me

1. How to tell/ask parents to go to therapy (as I am both a broke college student and quarantined at home)

and 2. How to go to/start/do therapy while in quarantine.

Interrupting someone’s emotionally fueled rant with cool reasonable logic is small dick energy. Like yes, jason, I am fully aware of the reasons causing the current situation. Now go fuck yourself while I eat a pint of Rocky Road and cry myself into a 14 hour depression nap.

running in muggy 13C heat is…. a very bad idea

#I have a VERY red face and I'm not sure how much is from the sun and how much is from the run itself, #but I DID do 4k so, #I'm fine, #it's fine, #everything's fine, #la vita di mika, #running, #half marathon training, #weather
0 notes · See All
notestoself05Text
#im not okay, #this is fine, #everything's fine, #timely reminder, #patience, #just breathe, #breathwork, #i cant breathe, #remain calm, #calm down, #morgan harper nichols
0 notes · See All
despairandjoText

I’m going to be honest

I made a noise that I didn’t know I could make. I sounded like an Aztec death whistle.

If you don’t know what that is…

Are you tired of me yet?

When I’m ready I will fly us out of here.

Cavetown - This is home

“Just wanted to make sure it was okay! Might as well get a choice with something.

#IDK where to post this boy's stuff, #but, #ykn ow, #everything's fine
4 notes · See All
picturejasper20Text

(Warning mention of PTSD and trauma)

Rewatching some scenes of “Everything’s fine” is.. disturbing. Steven seems to be in completely denial of the recent events.

“I’m Steven universe, i help people, i don’t hurt them.”

He’s doing his last attempt of having to avoid talking to the gems and his friends about his problems and keeping up appearances.

“Oh, don’t worry! I fixed that too! I can fix anything. I can just keep messing up and fixing things forever, and you’ll never have to know or think about any of it!”

This is when he goes on denial, when he notices his “Diamond eyes”. He tries going back to being the “cute child Steven” that helps everyone. That’s why he keeps repeating “Steven’s here to help”. He needs to convince not only others.. but himself he’s fine.

He was very afraid they wouldn’t love him anymore.

Just seen a really nice piece of art & you want to know more about me as the artist? Or just in need of a full overview of my work? Make sure to check out my website!

Sorta based off this 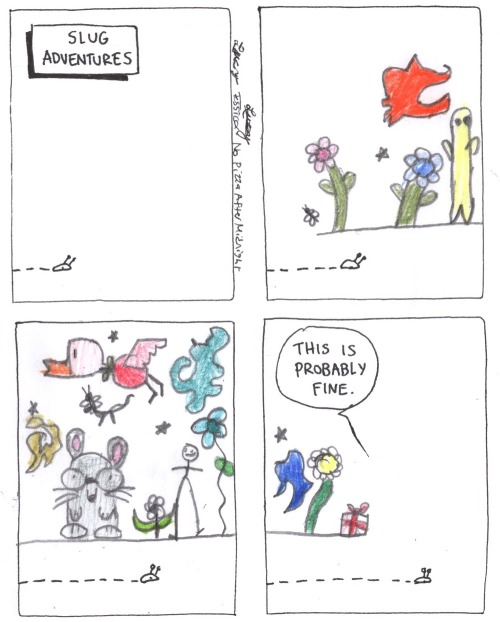