“Hey Fig”, Fabian hears the Genasi girl—Romilda? Rowina? Ronalda?—say after their latest Bard class on Tuesday. He’s breathing heavily after finishing his latest dance routine and he’s not actively listening to their conversation, but Fig stopped beside him to ask if he wanted to try dancing to one of her new compositions.

“I wanted to ask if you could—uh. Maybe give me the crystal number of your friend?”

Fabian grins down at his battle sheet, trying to remember if Romilda—or whatever her name was—is pretty and whether or not he wants Fig to give her his number.

“Which one?”, Fig asks, which is honestly ridiculous. He is easily the most attractive one—

Fabian stops folding his battle sheet and blinks before straightening his back to turn his head. Rowina is twirling a very pretty, blue curl around her index finger. She’s very attractive and Fabian is not sure he heard correctly.

congratulations to Fabian and Aelwyn for finding the only dynamic more insufferable than being a disastrous couple. everybody’s always asking Adaine to verify if whatever bullshit the two of them are coming up with now is real or not (most of the time it’s not). “hey Adaine is it really illegal to wear white linens to a high elven dinner party? i heard Fabian and Aelwyn say–” “i don’t even know please leave me alone”

he’s taking after his papa 💖 i don’t remember if this is canon or not (it’s probably not) but i could definitely see the reason bill seacaster proposed to hallariel in the first place being her knocking him on his ass in a duel and immediately popping the question right then and there so. runs in the family 💖

i also think fabian & aelwyn as a romantic couple will never last/work out but you know she will never let him live that moment down. proposing whenever one of them does something either very badass or very stupid probably becomes an inside joke between them

“Are we really sure that this is necessary?”

“I’m not being a baby, I just don’t see how this would ever be relevant to my life—“

“May I remind you that your dear mother tried to heat up a whole cantaloupe in a pan in an attempt to make it ‘pop’ when I went on a short vacation, Master Fabian?”, Cathilda interrupts Adaine’s and Fabian’s argument.

Fabian opens his mouth to speak, then shuts it again before crossing his arms over his chest. Cathilda regards him fondly and pats him on the shoulder.

“Master Fabian, there might as well come a time where you will have no one to take care of your food, so I have to agree with Mistress Adaine. A little bit of independence never hurt anyone”, she says and watches as Adaine smiles triumphantly.

“And I do not want to risk you or your mother hurting yourself over such a simple thing as a cantaloupe.”

“Okay, maybe the cantaloupe was a bit of a disaster, but I feel like we can put it aside now”, Fabian says only for Adaine to mouth “A whole cantaloupe. In a pan!” at him. Cathilda pretends that she doesn’t notice and steps closer to the kitchen counter.

“So, Master Fabian, are you ready for a new challenge?”, she asks with a smile and feels accomplished when she sees Fabian’s eyes spark. He’s still his father’s darling boy and backing down from a challenge was nothing that Bill ever did.

idk if this is the same person who asked for details abt my cheerleader au but either way. anon you are the light of my life.

but yeah. riz and fabian meet and fall in love one summer, before riz is supposed to move across town and go to mumple. they could still see each other just fine, but the seperate schools complicates things, and fabian doesnt want to be known as the guy dating someone who goes to mumple. so they decide breaking things off is for the better, and part ways. until sklonda finds out she cant break her lease for another year or two without a hefty fine and decides they’ll stay at strongtower until riz finishes high school. riz is ecstatic to be reunited with fabian, but fabian wants things to be more…hush-hush to maintain his reputation bc riz is…riz. n we all know where it goes from there babey !!!!!

Made the fantasy high cast using this picrew because I’ve still got brainrot !!

#I wanna change som of my headcanon cus of this heehee#I wanna add more acne to my designs#but also I worry faces will look cluttered cus I draw such small close together faces hrmmm#also I want to draw mullet fig now#do you think fig’s normal hair could be a mullet and then she braids it?? or is it weird to have a super long mullet that can be braided#fantasy high#dimension 20#picrew#adaine abernant#fabian aramais seacaster#fabian seacaster#riz gukgak#gorgug thistlespring#fig faeth#figeroth faeth#kristin applebees
296 notes
grasslandgirl
Text

“You ready?” Fabian asked, gently reaching out and letting his hand hover for a beat above her shoulder before it landed, giving her just enough time to lean away if she needed to. He was watching her, steady and careful, eyes shining in the dim lamplight of the lobby. His suit was tailored to perfection, of course, he’d probably been to a dozen of these things, probably grew up knowing exactly how to act and how to move gracefully through a crowd just like he did in battle and- god. Adaine needed to pull herself together. She didn’t have time to spiral about the fluttering electric uncertainty in her stomach when Fabian smiled at her, they were on a mission.

She nodded shakily, gritting her teeth into what was surely an unholy grimace-smile amalgamation, but to his credit, Fabian didn’t falter. He just smiled, effortless and confident, and tucked her arm into the crook of his elbow. “Spring break, I believe in you,” he whispered, and even though there wasn’t any bardic magic in his words- not yet, they might need it later in the night, Adaine was still hoarding her divination rolls for the day in case it all went sideways- they still comforted her.

READ THE REST HERE ON AO3

check out @dimension20alphabet to keep up with the rest of the event!!

sorry, excuse me- is The Ball not your real name??

for the @dimension20alphabet, B for (the) Ball!🥎

Fabian white knight’s Adaine and Aelwyn, and is the one to kill their dad

Drabble #2 for the @dimension20alphabet​! Prompt: ball

Fabian waits just outside the ballroom. He doesn’t adjust his mask, because his mask is perfect, but he does catch his reflection in the filigree of the door handles and preen for a moment.

The announcer finishes the last of his titles, and he steps through, and begins descending the stairs

Fig watches the newest arrival enter. They’re wearing a mask that ‘ornate’ doesn’t quite cover; a gleaming white swan, accented with gold detailing. It connects to what she thinks might be real swan feathers worked into their white hair, that connects down into a feathered cowl that perfectly matches their gown.

The feathers taper off at the shoulder and the entire front is glittering with silver—gems? Glass? Fig can’t tell, but where it should be gaudy, they manage to pull it off. She starts as she realizes that they’re not just moving toward the snack table (which is so big it takes up a whole wall of the ballroom) but gliding towards her.

Fabian looks over the crowd as he crosses the last step. He can recognize a number of the people here, and makes note of which ones to talk to later. His gaze catches on one person in particular, though, that he doesn’t recognize.

They’re wearing a black silk suit with just the faintest red embroidery, but that’s not what catches his eye—though the detail work is impressive, even from this distance. Their mask… It’s a grotesque thing, really, the twisted face of a devil snarling at anyone who looks at it, painted matte except for metallic red lines that only add to the already sharp lines. That… that is the mask of somebody Fabian would like very much to get to know.

“Fabian Seacaster,” he says, holding out a gloved hand.

“I heard,” they say, and look awkwardly down at the small plate of snacks in their hand, “Sorry about that, I, uh, wouldn’t want to get your uh. Gloves. Dirty. Fig.”

“My name! That’s my name, Fig, that’s me,” Fig says, and she wants to just give up and wipe her hands on her suit but Gorgug might actually kill her for ruining it.

I simply could not draw this without Ragh, Jock fashion is something to be shared. Spring Break! 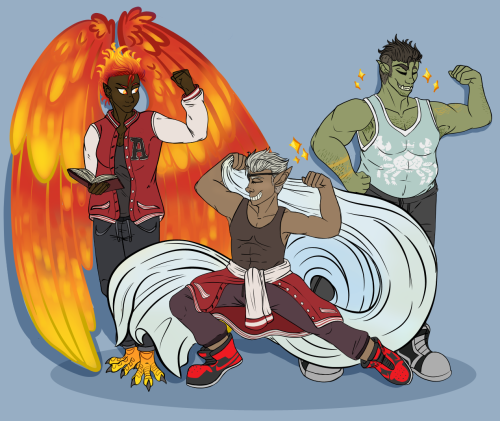 Fabians bike is just trying to set him up with everyone huh. 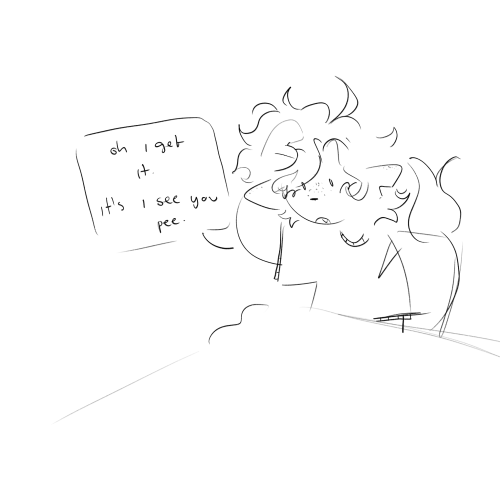 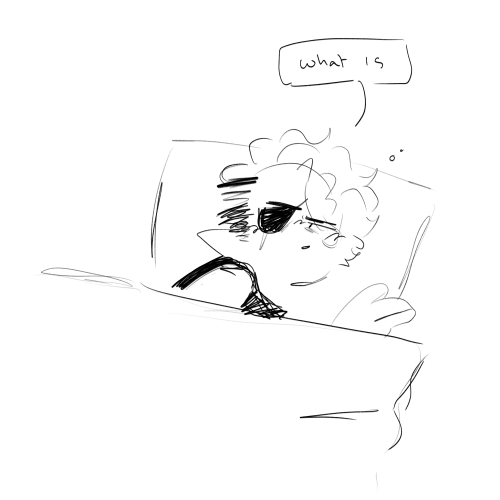 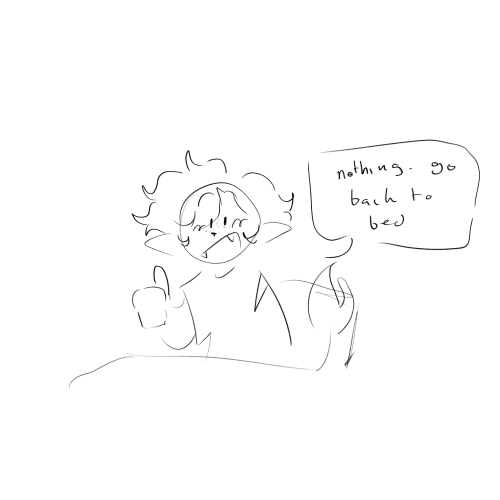