How companions would act while being ill.

Cait: Growing up Cait had never had anyone to look out for her when she was unwell. So even as a kid she was pretty self sufficient. That carried through as an adult. She’d keep to herself, keep hydrated as much as possible and pretty much sleep it off. She’d get quite annoyed when Sole would be all fussy about her. She knew they meant well. But she’d managed this long taking care of herself.

Codsworth: If anything felt slightly off Codsworth would immediately begin to worry. He would insist he was taken to someone who knew a fair deal about Mr Handy Bots. If he needed repaired he wanted it done properly. No expenses spared.

Curie: New to a human body, Curie would be very confused as something felt different. Even with her vast knowledge of medicine there would be a little bit of panic. But it wouldn’t take her long to come to the conclusion that she had the flu. And there was no cure for that. She would do all the right things. Drink lots of fluids, rest up, try and eat lighter foods. But at the end of the day when Sole would come through and wrap her up in a warm blanket she would feel a lot better.

Danse: Danse would insist that he doesn’t get ill. He was that kind of person. If he had a cough her blame it on something stuck in his throat. If he had a runny nose it would simply be something in the air causing it. A fever? Well clearly it’s just too hot that day. He would deny being ill, no matter how much Sole pressed him about it.

Deacon: Being sick didn’t bother Deacon. He quite enjoyed it. Being able to laze about on the couch. People fussing about him. It seemed to be the only way he could get some time off and to himself if he was sick. So he was a sucker for milking it. Absolutely milking it.

Dogmeat: In true dog fashion when sick Dogmeat would simply sleep the day away. Occasionally lifting his head and looking towards Sole so that he could be fussed over for a few moments before he laid his head back down.

Hancock: Hancock had a simple solution to making himself feel better when sick. Chems and booze. And lots of it. If he could get himself into a state where he couldn’t feel anything he absolutely would. What better way to get over a sick bug than to get absolutely fucked up.

Macready: Growing in Little Lamplight Macready had a complex about being sick. It made him nervous, on edge. He’d never know how to really make himself feel better while sick. So he still did things that made no sense thinking they would make him feel better. And yes that did include ‘kissing boo boos’.

Nick: If Nick felt off everyone knew it. Though he didn’t ask for any special treatment he would end up in a foul mood. Snapping at people and just being quite unpleasant. Though he did always apologise for his behaviour when he was feeling better.

Piper: Piper hated being ill. It made it harder to get her work done, but she always insisted on pushing through. Growing up when she was ill Nat was usually also sick, so she’d got used to looking after her little sister and just riding out her own feelings. But despite this she was a sucker for being babied. Sole would check her temperature, place a damp cloth on her forehead, feed her soup and wrap her up in warm blankets. She couldn’t help but love it. She’d give in right away and let herself be looked after.

Preston: Now Preston was one of the lucky people. It was a rare day that he was unwell. And when he was it didn’t usually last long. He was level headed enough to know how to act and to keep his head down until he felt better.

I’m haunted by a mosquito!!! 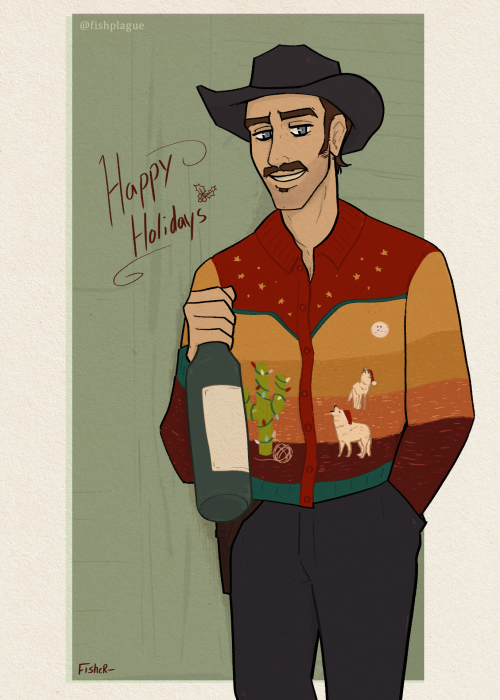 #fallout, #christmas, #fallout 76, #artists on tumblr, #fo 76, #fallout ocs, #oc: dapper dan, #fishplagueart, #i found the worst and best sweater for him and edited a bit, #i think he looks nice in warm stuff despite always being in black, #is he drinking that bottle by himself or offering it to you?, #who knows
4 notes · See All
fallout4artPhoto Traveling around the commonwealth for Freddy Shane and Danse just consists of Freddy yelling at Danse to shut up if he breathes too loud or makes a stupid comment and Shane having to deescalate the situation.

#Shane just wants everyone to get along, #but he picked to travel with people who don’t get along, #fallout 4, #fallout
0 notes · See All
vaguewritesText

I doodled Birdie from Tales of the Commonwealth and my oc Oliver:))

my second piece for the @falloutpinupzine !! the vibes of the ultra luxe were so much fun to design for :p 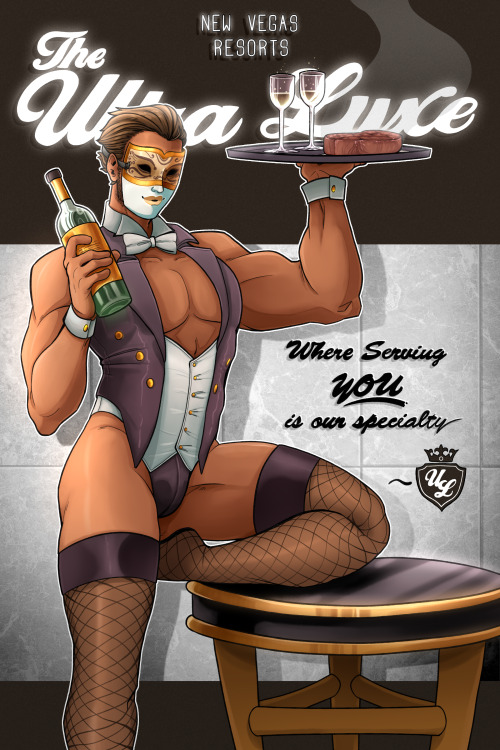 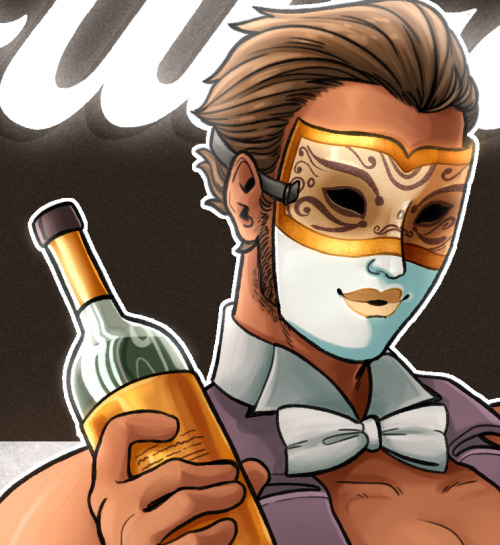 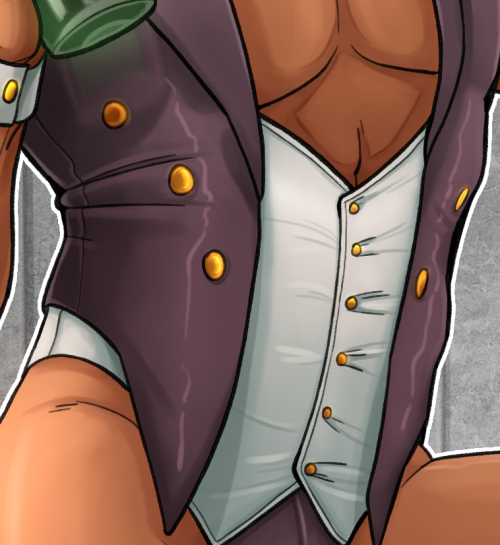 Some doodles of metal husband at work

I honestly think modern music would still be a thing in Fallout because the sheer image of the sole survivor, courier, and lone wanderer head banging to Bodies by Drowning Pool while absolutely demolishing a raider camp is the single funniest fucking image. I might just have to draw this later but if someone draws it before me PLEASE tag me because I would love to see it.

It’s a chilly fall afternoon on the homestead

#sunflower's video, #fallout, #fallout 76, #video, #chickens, #also squeaky is being best boy and guarding them, #i have a bunch more but I'm gonna space them out a lot just so it's not annoying
7 notes · See All
gold-and-rubiesText

What do you think would happen if you met your favorite companion?

I don’t think it matters from which game for me, because no matter what it’ll probably just be really awkward 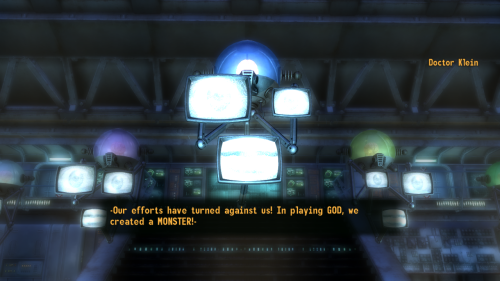 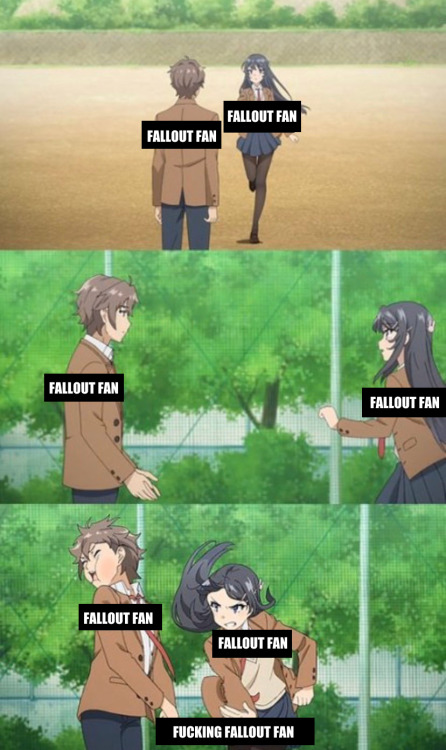 #fallout, #let me get this straight. some fallout fans definitely deserve it.
12 notes · See All
letmebegaytoddText 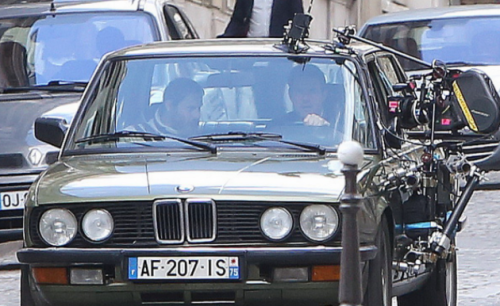