The Bad Kids as ABBA Songs (strictly because I can):

Fabian: Lay All Your Love on Me

Fig: Does Your Mother Know

Gorgug: The Name of the Game

Ayda: Slipping Through My Fingers

OH yes I have had the teacher gorgug au on my mind all day… zelda and ragh also work at the same university with gorgug! zelda teaches something cool like mythology and organizes the university’s fencing club and ragh is a guidance counselor! he wants to help kids the way that jawbone helped him! I just think that gorgug and zelda and ragh should be best friends and I think they take a road trip after graduation to take a break from adventuring and figure out what makes them happy. also zelda asks gorgug to be the best man at her wedding

I love reptiles and invertebrates in general but my favorite animals are mantises! I just think they’re neat

#fantasy high, #dimension 20, #web series, #dnd, #rach rambles, #d20 said all of our main characters are lgbt what about it
3 notes · See All
theboxofdoomText

cleaned up and coloured a sketch of garthy and ayda that someone requested on IG! maybe shes thanking them for finally putting a shirt on before coming to Mordred Manor Family Dinner Night TM 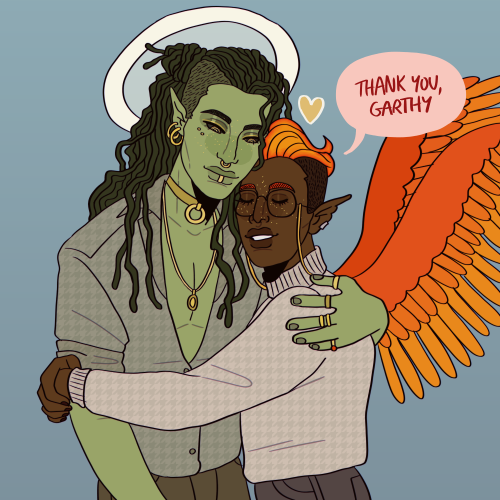 Opening commissions to support the #BLM movement! All proceeds go straight to a legitimate organization of your choice, I will receive the money first through PayPal and send you proof through receipt. Thank you!!!

Send me a DM or an email at hanidrawz99@gmail.com with your sketch request, photo and pose references, and the organization of your choice FUCK WHITE SUPREMACY

Gilear goes down for tax evasion. Like nothing insidious, he just didn’t do his taxes right and wrote his details down in such a way that the government of Solas was like “oh, this motherfucker is trying to scam us” and when they bring him to court he makes everything worse when he tries to explain himself because he’s Gilear and they up his sentence from two and a half years to five.

Anyway, while in prison, Gilear gets absolutely SHREDDED. Like I’m talking Uncle Iroh level of beefiness. Even goes to shave his hair off and, despite his elven genetics, someohow grows a goatee. People in prison and on the streets now call him “The Gil-outine”

So I see there’s a of Emily appreciation (as there should be) but DAMN, Murph is also dope as hell- and I don’t see much about that! He talks about a lot of things that may be traditionally unconventional, especially for men. From Hot Date where it basically is all one honest conversation about relationships, love, and sex to NADDPOD where he touches on so many subjects to Riz on Fantasy high where he has an ace character that’s not “sex repulsed holier than thou unfeeling intellectual asexual” (which is what most not focused on lgbt media portrays). Even with Kugrash from Unsleeping City he talks honestly about making mistakes and being a bad man, and that he owns the fact he was wrong and tries to be better. Murph is honestly amazing and I love him and Emily so much.

“That was worth it and I don’t regret it!”

#notorious masc moment, #dimension 20, #fantasy high, #this is an inside joke but im putting it in the tags
5 notes · See All
oliissadText

Hot man, seven levels in fighter, four in Rouge and three in cleric.

You can say he believes in a moon God

Siobhan Tompson has a B.A. in archeology and this is my petition for her to please PLEASE play an archeologist in an action adventure campaign.

Kristen Applebees grew up with a clear set of rules. They were simple, a comfort in a world that was always rushing. She knew her place. She knew where she was going to go. You just have to follow the rules.

And then Kristen murdered someone with a Bible.

“It’s a symbolism,” she said into the silence of the van.

“The murder,” Kristen slurred. Fig looked concerned, but she went back to tuning her bass. Kristen had been drifting through the haze of alcohol for the last week, ever since–

Not yet. She doesn’t have to think about that yet.

Kristen needed to think about some things, so she does the obvious thing. Gets incredibly drunk.

I need a formal apology from literally every Fantasy Hugh fan who neglected to inform me how amazing Ayda is. Like. I love her.

#fantasy high, #d20, #also fuck the transcriber bc, #episode before where they were sent to find her, #it said, #'Ida Egfort' or something and i didnt catch on
3 notes · See All
juiceboxmanText

DMing a game with a bunch of D20 fans and after an interaction with an NPC, we got a shoutout to your boi

When you’re born with a big dick and would naturally have big dick energy, but God has decided to pursue a vendetta against you and thus makes your life a living hell, which in turn cancels out the big dick energy

guys, I acendataly shaved some of my eyebrow off, should I go full slit so I can be Fig/Annabelle?