I’m Myth. 20 years old. And I still have no fucking idea in how to draw hands.

This is a small sketch of my next drawing. It will probably be finish… This week… Probably… Yes.

RIGHT? Shinjuku is a story about a cast who on a surface level are defined by hate (Moriarty @ Sherlock, the Avengers, Salter’s nature an Alter) but end up loving anyway because love and hatred are both the same kind of fire; one cannot loathe if they lack the ability to care. Moriarty genuinely comes to love you. Lobo was born out of grief for his love. Phantom’s whole deal is that he loves Christine. Dantes was born out of betrayal from that humanity he loved. Jalter hated first, but comes to love you just as intensely. Salter, emotionless as she may be, still clearly cares about you.

And I’m talking about you, but it’s so much more than that. It’s Jalter and Salter’s witty banter, finding in each other something of a friend (vitriolic, unstable friends, but how else could people like them ever bond? Ever love?) It’s Salter and Cavall II. It’s Salter and Jalter learning to dance. It’s Salter silly fondness of junk food. It’s a story about how even in the depths of hatred, humans will be humans. Even raked by loathing, even if the world is some post-apocalyptic nightmare, still, we can’t help but love.

And it culminates with that antagonist, this demon pillar motivated sorely by hatred, who has no one and nothing left to love, not even his own life, and comes out as inhuman as he is pathetic. And you, the protagonist, the dumbass who saw a city of fakes, and though: I’m going to save them. Because your very companions are fake. Jalter is a clone who escaped history’s bars. Salter is but the corrupted version of Artoria- she herself never did rule over Britain. Your companions are fake, but they love, and so you can’t help but see them as people, and you love them, and saying “this city’s suffering doesn’t matter because they’re fake” would be the same as saying “these people I love are fake and their suffering don’t matter” and you love too much for that. 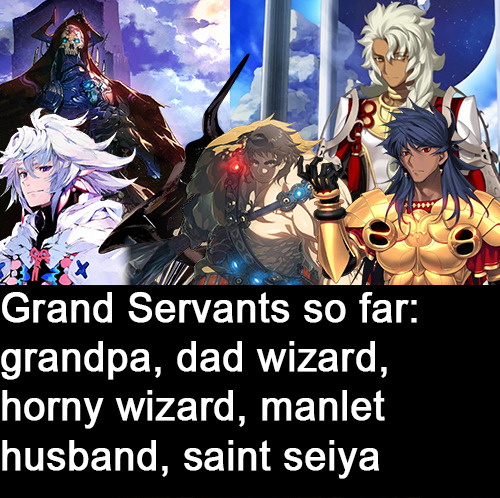 “The contents of the record [are] 115 images and a variety of natural sounds, such as those made by surf, wind and thunder, birds, whales, and other animals. To this they added musical selections from different cultures and eras, and spoken greetings from Earth-people in fifty-five languages”

I love you but this is where the story ends baby.

Cain steps up. A nice way to end the story!

This is part 2 of the Fate/Clubhouse au! Basically they’re all bunny boys and do pole dancing and shit. It’s just a crack au tbh so don’t take it too seriously~ Part one is here!

✿ The club’s cutest boy! Since he knew how to walk with high heels from the get go he helped other servants learn proper posture and all

✿ A fan favourite- He doesn’t have a moment to himself since he’s always requested by clients. Luckily he doesn’t mind as long as he has fun

✿ A berserker (security, if you will) has to always keep an eyes on him to make sure he doesn’t sneak out of the club to go on a date with a fun client

✿ He’s really good at making the costumers buy expensive drinks. As it stands, he’s one of the most profitable employes around

✿ Gil has expensive tastes. His tastes are so expensive, in fact, that he’ll refuse to drink anything that doesn’t cost a lung

✿ Same goes for gifts and dates. If there’s not gold everywhere chances are he’ll stab you and frame your family for it

✿ He also has a bad tendency of using gate of Babylon in the club, as well as picking fights with costumers and other servants

✿ The only reason he didn’t get fired yet is because he also makes bank. Apparently the tsundere appeal is strong with this one

✿ Merlin? No, we don’t have any servants named like that here. We have a cute servant named Magi☆Mari though!

✿ Those patrons are willing to sell a liver for Merlin. They have that scary dedication idol stans have. He’s their oshi and they’ll kill for him

Now mommy was driven to suicide to atone for her sins. Poor kids ;-;

Reading the fate apocrypha manga right now and the art is just soooo good. Look at Mordred right here, just gorgeous! She’s my fav, and the artist just does them justice. Mannn those lines are so clean

“Servant, Rider… My name is Laika. Thank you… For letting me come home…” - quote if summoned.

A.K.A.: The First Spacefarer of Earth, Space Rider, Spacefarer, Rider of the Unreturnable Journey

Remove all buffs from self, grant Invincibility for one turn to all allies except self, gain 20 critical Stars, increase critical damage of allies by 50%. Inflict buff block to self (unremovable) for 2 turns, inflict death to self after 2 turns.

That girl is poison!

Adamska is a sucker.

Mo was a victim of circumstance.

Just older siblings looking out for the youngest.

The beauty of mystery. Nothing is for certain 😀

She looks so beautiful in this ascension. I’m keeping her in that