So, I finally FINALLY finished Cowboy Bebop and I’m sorry fellas but, it’s gonna be a C for me. I’m used to bottle episodes with little plot, and it certainly adds to the mystique and philosophy regarding the past. The thing is that, because the majority of episodes are self contained and the actual plot episodes are spaced out, it took me months to finish it without getting bored.

I don’t love Jet or Ed, I like Spike and Faye, I can’t tell if I think Viscious is a good villain or if I’m just filling in the blanks according to what the show tells me. There’s a lot of that going around too. We only get flashes of what’s going on with Julia, Spike and Vicious, but no clear story or even an ending with Spike so it’s nearly all up to interpretation. Of course I get that it’s the point but it doesn’t add anything for my viewing experience. The characters I got closest to loving were Spike and Gren but it’s hard to get to know anyone in this story.

I did connect with the most with Spike at the end and yeah the character’s ends were super poignant despite my view on the series. It strangely reminds me of Cyberpunk 2077, though instead of being all about a sense of self and finding meaning in life it’s themes about acceptance, the past and how we move on from tough situations. In the end of Cyberpunk, an emphasis is put on not hurting others through your actions because your end will be the same no matter what. I felt that Faye and Jet could’ve helped save Julia, but of course it had to just be him because he had to pick up where he left off. It was like he paused his movie to put off the tearful end until he was ready. Spike really got me with the dream stuff. The stagnation, the fear of moving forward and just the inability to let go. Powerful stuff, just not my favorite execution.

Been super into space cowboys recently 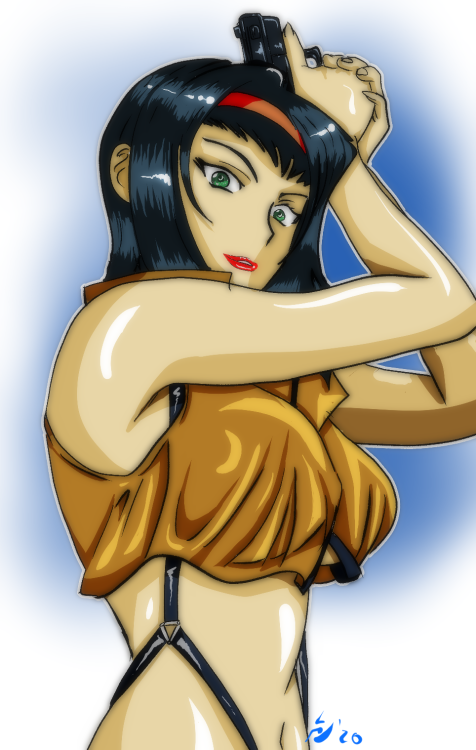 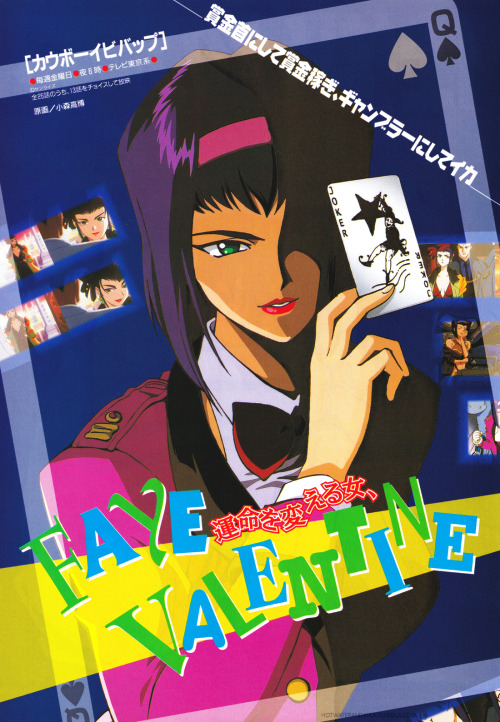 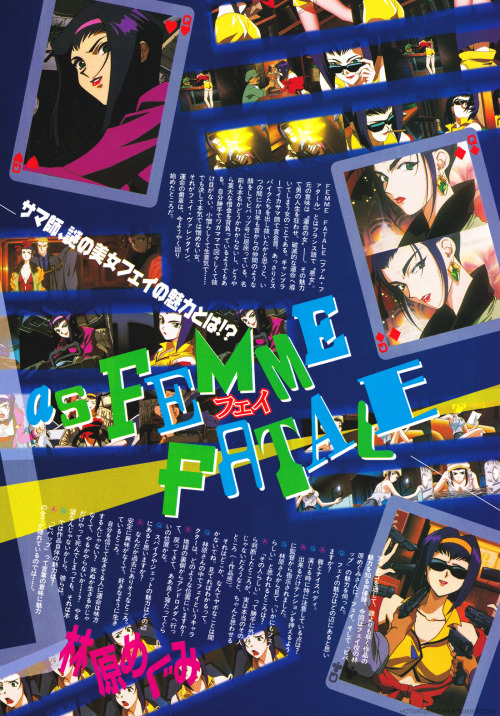 So I’ve been watching through Cowboy Bebop recently, which first of all, smart-ass cocky bounty hunters in space with a robot dog, what’s not to like? Second, the amount of times one of the characters, Faye Valentine, ends up handcuffed to something or another is ridiculous and it’s killing me. 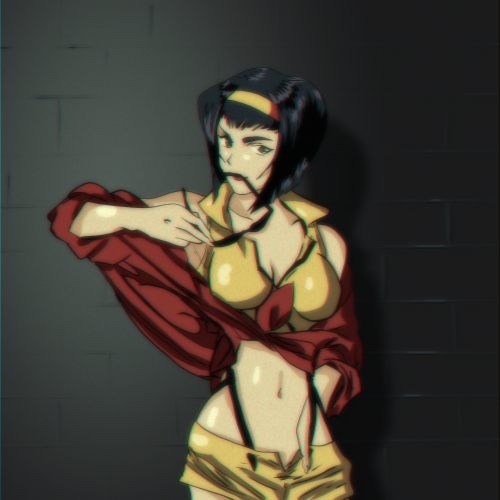 Alright, I just finished this show a little while ago and it seems like a good way to start this whole thing, so, uh, yeah. I love this show. So dang much. The characters and the atmosphere combined with the loose worldbuilding make it an endlessly enjoyable experience to watch, and it took me a few days to cope with that 15-story fall of an ending. It’s very rare that a show has the guts not only to unequivocally end after it told the story it set out to tell, but to cap off that story by capping the main character of the show.

For those out of the loop, the show follows a band of four bounty hunters in the (not quite near, not quite far) future, trying and failing to make a living bringing in criminals amidst a developing solar system. Most of the emphasis is put on the main character Spike, a laidback martial artist with a mysterious backstory, and his longtime friend, Jet, a former cop with a metal arm. The story is mostly made up of unconnected episodes as the two, joined by a chronic gambler with an equally mysterious backstory, Faye valentine, and feral child/tech prodigy Edward. Over the course of the story, Spike’s past comes back to haunt him and periodically interrupt the usually fun vibe of the show, until it finally overtakes him in the season finale.

In terms of what I thought, The overarching story with Spike was masterfully done, and each of the intervening episodes had a fun concept and wonderfully creative side characters, but some elements of the other characters were handled a bit weirdly. I remember there were two episodes about characters from Jet’s backstory and they played out eerily similarly to each other, and Edward seems to entirely forget about their hacking skills the moment they join the party, leading to some annoying moments, but the only really serious problem I had with any of the characters was Faye.

Faye Valentine is not very well-written. I don’t know how else to say it, but she feels like a very lonely man’s impression of how a woman acts. Aside from her backstory, which was very interesting conceptually, her entire character can be boiled down to “whiny, but really cares about her friends deep down”, which is disappointingly shallow for a show with so many interesting characters. It’s not a huge problem, and all the other characters more than make up for it, but there were some times when I found myself surprisingly irritated when I had to deal with her for more than a few minutes.

Back to the good stuff though, that main arc was a transcendent piece of storytelling. The way that the brief and barely explained clashes with the shadowy syndicate from Spike’s perilous past is intercut with long swaths of happy-go-lucky adventuring shows you, in depth, the attempts our hero is making to escape his old life. After the mid-season showdown with Vicious almost convinced both Spike and the audience that he was finally free, it became all the more heartbreaking to see that struggle claim his life in the finale. It’s a truly special and impactful arc, and it deserves to be remembered as one of the best.

There are a few other elements that I don’t have much to say about but felt were worth mentioning, namely:

Ein is cute, and makes for a good supporting character to Ed.

Edward’s personal arc is sublime, and the way they parted with the party was believable and left me feeling genuinely sad.

Edward is also heavily implied to be transgender, and that makes me immensely happy. That is all.

So there are my thoughts on Cowboy Bebop, as of January 2021. It may have been a weird choice to start, but hey, I think it’s interesting. Thank you for reading this, to anyone who is.

“Totally present in this moment for you.”

Jet: You two are playin’ me! That did not happen. What am I sayin’? Of course it did.

Faye: Yeah, it did. You see, Lunkhead over here, didn’t think about security. He jus’ went guns ahoy, and I had to save his sorry—

Spike: No. It happened the other way around, and you know it.

Faye: What?! You know if we had just walked out the door—

Spike: Whatever. Once a looter, always a looter.

Jet: You know what? I don’t care what happened. All I know is we’re short of a bounty. And I blame you both! 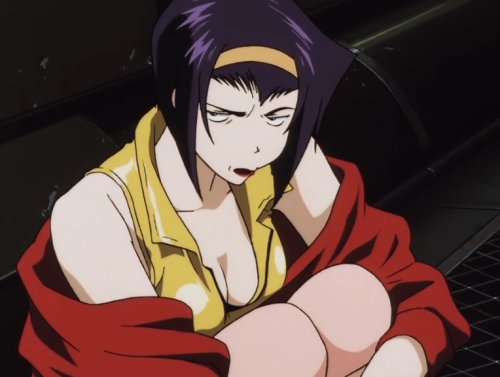 to anyone that’s interested in old-timey anime i recommend cowboy bebop. it has some old school adult swim vibes which i love, the music is Swanky, and the characters are all very well done, i recommend.

also there’s a lot of poc characters, and one of the main characters is like,, genderless in a way that’s fun and addressed. 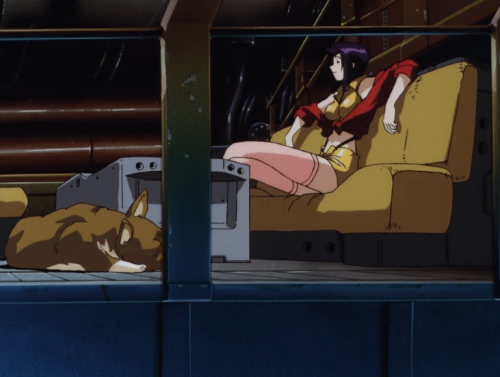 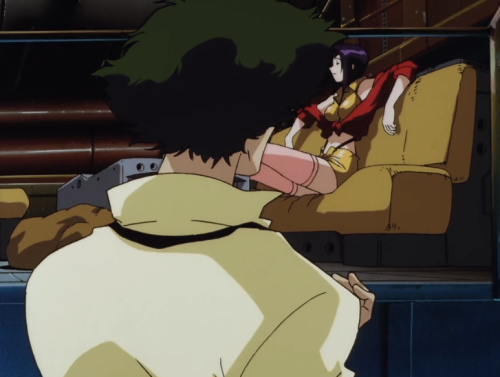 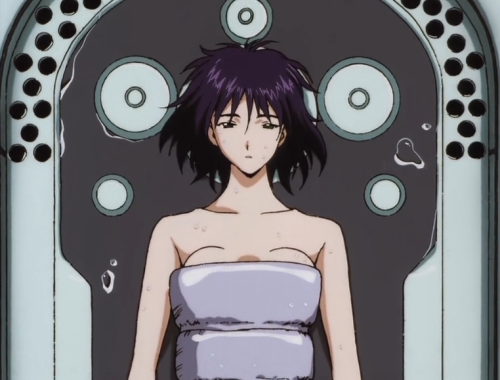