Hello everyone! Hope your doing good! My periods just ended, so I’m feeling loads better now! Today I have a question for everyone! If I were to post some arts stuff would you guys enjoy it, or should I stick to text posts? Let me know!

Thats it for today, sorry it’s not very long but I’m still tired from my period so there it is! Have a good day/night!

One of my favourite photos that I have taken

concept: me actually getting off my proverbial ass and doing some RPing

#feel free to reblog#pretty sure i'm not the only one that feels like this!!!!
0 notes
ternaryflower53
Text

“ *jitters across the floor on full vibe*”

“Lizard wobbles of love and affection”

Hey yall, no wrong answers: is the amount of wealth that can be had finite or infinite?

One thing that I absolutely HATE about zoom calls is that if I have my video on I can see my own face, cause I always spend the entire time staring at myself and obsessing over how I look and how everyone else is perceiving me, so I tune out everything and get super stressed and learn nothing (plus it slows my internet and everything buffers) BUT also not ever turning it on means no one has seen my face in 11 months which feels so isolating

B: “We just discussed this! We were going to adopt a pet!”

A: “Well don’t talk to me about that when we’ve just killed a man!”

B: “Well we could keep the corpse as a pet as well.”

Here’s another commission which I did for a friend: Grogu riding Garfield. The idea was just silly enough to work. Unfortunately, this friend doesn’t have an internet handle, so I can’t tag him. Still, enjoy this lovely piece of comedy! 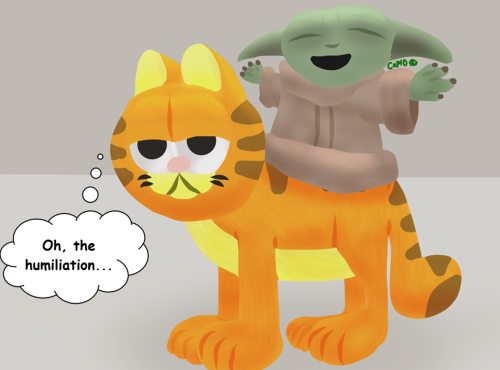 I’m off my rocker and made a weird ask meme 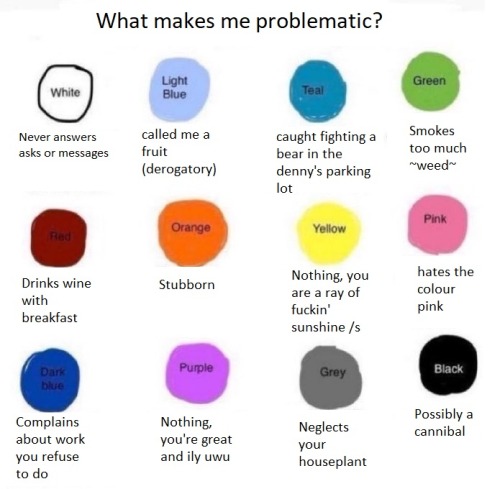 An animation i made at 3am. Pls reblog:]

Since I’m here and it’s been going around Tumblr a lot recently, anybody caught participating in Queerphobia of any kind, exclusionism, gatekeeping, sysmedicalism or system gatekeeping will be blocked immediately.

i was mostly fine with the secret alt accounts thing at first, even though i never had any hope of being part of any of the secret twitter accounts since i don’t even have twitter? i get that it’s fun to make secret accounts and stuff. but even though i do have the names of the alt twitch accounts, it’s really frustrating to me knowing that i’m missing so much content because there aren’t any vods. it worries me knowing how many people are like “well i can’t go to sleep in case someone streams” and this is going to make that so much worse. please sleep. i get that it’s horrible knowing that you’re missing content entirely. i hope this doesn’t mean they stream less on their main twitch channels.

i think it would have been one thing if one of them had made an alt twitch with a name related to their brand, not given the name anywhere, let people find it or not find it on their own, and then request that no one told. obviously it would either get out eventually or never be found. it could have even been fun if they did what george did with his second twitter and made a twitch account, told people it existed, and not told them the name. maybe that would give people the opportunity to go searching through some twitch channels with like no viewers that they wouldn’t have watched otherwise. idk, i’m spitballing. i know karl mentioned making a secret twitch a few months ago so it wasn’t entirely unexpected? but i didn’t expect it to happen like this and i think this was one of the worst ways to do it.

i’m not sure if it’s the no vods thing or the twitter user gatekeeping argument that’s bothering me. it’s upsetting to know that i’m missing out just because i have a sleep schedule, and it’s stressful seeing people getting worked up and yelling at each other about something like this. i’m so tired of waking up to find that they’ve yet again created another secret account that makes me feel excluded from the people who actually get all of the content. i get that making new things is fun and i know exactly how it feels to start a new secret project and to want to share it but also want to keep it to yourself. it’s so satisfying. but being on the side of someone who wants to be able to support their favorite creators but feeling excluded every time they do something new? it kind of put me in a bad mood tbh. something like patreon is one thing. i’ve come to expect that content creators are going to have a paywall that i can’t get past. but this feels kind of gatekeepy and annoying, even knowing that i might be able to access future streams if they don’t happen in the middle of the freaking night.

if anyone wants the secret account names, i’ll message them to you or send them in an ask. (i haven’t been very active on tumblr because my brain gains and loses interest in spurts, i guess, but i’ll try and watch out for responses.) i understand not wanting to share them publicly out of respect for the content creators. but i don’t think hiding them from people just because they weren’t one of the lucky few is very fair.

#vent#critical#i'm not going to put this in the tags#but if you read my rambles thanks i guess#i love these guys! they're great#but this bothers me and i guess it just came to a head with last night's accounts#idk i'm tired#feel free to reblog
4 notes
ternaryflower53
Text

@ self, idk how to tell you this, but opening the word doc and then thinking about the fic instead of writing also doesn’t count as writing

This happens when you are in public and recognize through a turn of phrase, accessories, clothing etc that somebody is indeed “a weeb”TM. However, you cannot say anything to them or the people around you without making it abundantly clear that you aren’t as blissfully ignorant as you appear to be. So you just kind of exist in a state of knowing but not being able to do anything positive or negative about it.

For example: seeing a goddamn Yuri on Ice sticker on my college professor’s laptop and not being able to call him out for it to friends without simultaneously outing myself for having the ability to accurately recognize some colored blobs from a show i’ve only seen tangentially on a tiny box from twenty feet away.

as a trans/enby person who may not be fully out/passing, having someone you trust and(/or) love accidentally misgender you is such an unexpected cold slap of reality. cause not only is it a reminder that you still don’t pass the way you had hoped, but it also reconfirms that suspicion at the back of your mind that people are only using name/pronouns just to placate you which….sucks

A bit of re-draw