We definitely lost the battle for short haired fem Ichigo in whichever headcanon @rayshippouuchiha publishes first, but we will not lose the war.

Long haired Ichigo is very pretty, but an orange punky bob is gorgeous and this is the hill I’ll die on.

Side note: got a non broken stylus and wanted to practice.

#bleach, #ichigo kurosaki, #at least we can all agree that epilogue ichigos hair isnt even up for debate, #anime, #shonen, #fem au, #fem ichigo, #imspired by rayshippouuchihas masterlist of bleach fic ideas go check them out, #my art, #my crappy art, #digital art, #fandom, #fan art, #fanart, #grimmichi, #uraichi, #byaichi, #i think those are the shipping names its been a while, #redhead, #female, #girl, #teenager, #class, #student, #lighting, #window, #sunlight
82 notes · See All
dearaugustinText

oh no i forgot about them

a collab!! hannah(?? hmmm) anderson by me and connie by my dear friend erica (vk.com/p_tits_a)

It was astounding, really, just how fast things had gone to shit.

Bryce hadn’t intended it to end up this way, obviously, but that implied things generally tended to go her way to begin with. She breathes, and wrinkles her nose against the acrid stench that fills her lungs, burning all the way down. She ignores the way her heart suddenly kickstarts in automatic response, the way the hairs on the back of her neck stand on end.

For all that the Iceberg Lounge tended to be the gathering place of all of Gotham’s ilk, it was generally accepted to be something of neutral ground– a place to make deals and hedge bets, not so much a place to air your grievances due to whoever had pissed you off that week.

Bryce is forced to take another breath and chokes on it as she pushes herself further into a corner of upturned tables and chairs, desperately tamping down the fear clawing its way up her throat. She was only here to do reconnaissance, as Matches rather than Batman, which subsequently left her woefully unprepared for Jonathon Crane’s surprise attack against– god, who even knew at this point. Bryce could hardly think. Most of the clamor had died down from the initial fear gas attack, but she could still hear distant screams and gunshots.

More gunshots. Fear spiked. She was back in the alleyway, she was on her knees, her dress was damp but she couldn’t tell if it was somebody’s spilled drink or somebody’s blood, the gas was getting to her and normally she could fight it but– but–

A hulking figure suddenly steps into view, face obscured by a gas mask, a handgun raised in a tightly gripped fist. Bryce chokes on a scream, scrabbling backwards only to be stopped by a wall. Her vision swims, contorted and warped by the effects of fear gas that only grows stronger with each breath she takes. Hazily, Bryce realizes she is screaming, only stopping when the figure crouches and quickly puts a hand over her mouth.

“Easy,” says a gruff voice, familiar even through the confusing haze of fear; it’s enough to get Bryce to finally still. “Easy, I won’t hurt you.”

She can’t trust him. Can she? Every nerve still thrums with cold fear but his voice is warm and his– eyes, Bryce can see his eyes, they’re soft and Bryce can finally see the rest of him, the bi-colored suit and the scarred hand around the gun.

“Harv,” Bryce gasps, uncaring of the act as Matches she had to keep up, the unflappable gangster’s moll she was supposed to be instead of the scared little girl alone in a dark and damp alleyway. Harv just hushes her, leaning closer, head inclining as Crane’s rasping Scarecrow laughter echoes distantly through the Lounge.

“Keep quiet,” Harv says, and god Bryce wishes she could, but she can’t escape the fear, the visions of her parents in front of her, the sight of Harv threatening to twist and warp into that dark shadowy figure that still haunted her dreams.

“I won’t let him hurt you,” Harv promises, full of intent, Two-Face’s grit threatening to trickle in. “I’ll protect you, but you gotta calm down. Can you do that?”

Crane’s laughter drifts closer, accompanied by a lilting nursery rhyme Bryce couldn’t even begin to recognize in that moment. She nods shakily. Through the darkened visor of the gasmask, she can see Harv’s eyes crinkle in an unmistakable smile, so achingly familiar, it was just enough to force her quiet.

“Stay with me,” she begs, and tries to ignore how small she sounds. “Please.”

There’s a small hesitation, then Harv nods. He turns, and takes position should Crane come any closer.

Bryce breathes, and tells herself it’s going to be okay.

Yesterday’s entry for Maxvid week. My entries are all out of order but I will do them!!!

Tsukishima didn’t know what she was thinking. The damn thing had hurt terribly, her pain tolerance abysmally low for reasons she couldn’t comprehend. It still hurt now, especially when she wiped her nose and forgot it was there, pulling it on accident. Her first piercing probably shouldn’t have been on her nose, much less a hoop, but it was too late to change it now.

All her regrets had vanished the moment she saw Yamaguchi’s face when she walked into the cafe.

#tsukishima kei, #yamaguchi tadashi, #tsukkiyama, #fem au, #is this an acceptable drabble? no. is this closest i'm ever going to get? probably, #dais writes, #writing ask
32 notes · See All
funeralcheesecakeText

Last. I sort of binge drew these three. I’ll just, put up Dan tomorrow. 😅 I really do need sleep. It’s the wee hours of the morning here… I’ll leave you all with shy, beautiful Hosuh.

Knives Are Too Informal

Drew this instead of working on school stuff. Yey! Anyways, meet Female Stephen!

#aesthetic, #original, #dark au, #fem au, #fanfic
1 notes · See All
ask-albert-masonAnswer
♔ for my muse’s reaction to yours pushing mine up against the wall (@arty-morgan) (IM SOrry)

Allison gasped gently as she was pressed against the wall. Her hands flew to Arletta’s waist quickly and she met her eyes. 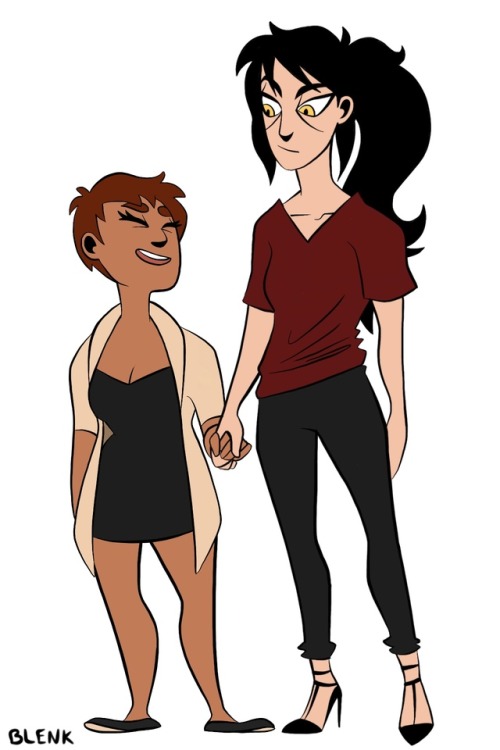 had this idea and kinda got inspired?? so basically i want to try new brushes and drawing a wangxian fem au please look forward to it!!

#wwx, #fem au, #mdzs, #new project, #in progress
8 notes · See All
atenementfunsterAnswer
Hmm idk if this has been asked before but can you do some more genderbent hcs? Like certain descriptions of the girls i guess pfff and i would love to see more if you have indeed already written some

Liz cranes her neck so far back it pops, her face contorting even as she flops onto her side. “Bel, you mind grabbing a pen?”

The brunette looks up from her studies, one brow arching delicately beneath her bangs, and chucks her blue highlighter across the room. Liz ducks with a squawk, messy bun bobbing as she ducks her head to try and avoid the hit. She fails, and the highlighter smacks her on the temple. “Rude,” she hollers, flipping her the bird before settling back into the cushions.

In truth, she just wanted to doodle, and by the time the back bedroom door opens, she’s done her best attempt at artful calligraphy. A heavy weight falls into her lap with little preamble, and all the air goes out of her body in a whoosh. Grunting, she shoves at Melina’s shoulder, but she doesn’t budge.

“That’s shit,” she says, biting at the biscuit between her fingers. Crumbs scatter across the paper, and Liz glares at her purple shoulder. Burying her face into the crook of Mel’s neck, she huffs into the short thick hair.

“Sorry love,” Melina says, and Liz can hear her smile, “but it really is.”

“Why are neither of you wearing pants?” Both of them look up at Maggie’s disdainful voice from the kitchen. “We have that dinner to go to.”

“As much as I hate to simper to pompous white men,” Bel says, droll to the last, “I would like to play somewhere that isn’t this cluttered loft this time next month.” She runs her hands over her plaid skirt, high up against her ribcage. “Not that I don’t think they would love seeing the two of you parading around like that.” She gestures with her pencil, up Liz’s bared thigh and over Mel’s side.

Liz sticks her tongue out and wiggles her striped pink-and-yellow bum, and Maggie chokes on her tea.

“Give or take five thousand years.”

I’ve drawn so many Fem AU merthur and never posted any. It’s pretty insane like I have a whole back story for them and this is the first time I’m showcasing them… ha, me and my lazy arse. Well, here they are and I hope you guys enjoy! 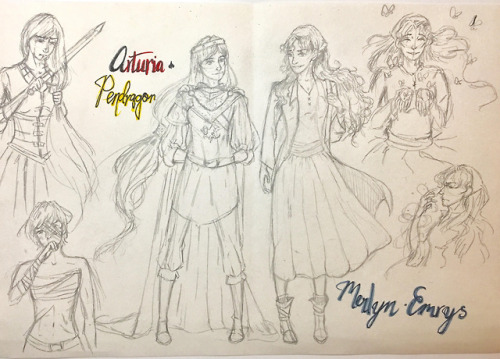 fem craig’s name even be 🤔