since Wanda is only a year older than Peter, and everyone in this fandom has decided that every avenger is Peter’s parent, I think it’s the same with Wanda. like mama natasha in civil war teaching her to be a good spy! y'know? for example

Natasha: sweetie, you did so good this time!! when we get back to the base ill teach you how to break more bones! although you do have your powers to do that…. anyways, I’ll buy you coffee next Saturday after our meeting, it’ll be fun! ill show you the best types of discrete gun holsters for everyday wear 🥰🥰🥰 just in case……. have you talked to Steve lately? he said he might start giving you harder missions. no pressure, no presure.

So is Civil War evidence that men make the worst decisions in the absence of the influence of the women in their lives?

Happy International Women’s Day to all the strong ladies in my life, you’ve inspired me to be the best possible version of myself. To @red-head-widow , @shuriofwakanda16 , Pepper, Carol, Gamora, Nebula, and Mantis.

I appreciate Peter handing over the glove then spideysneaking away because he knows when the women are about to get things done and he should just get out the way because Aunt May raised him right.

i used to have so many feelings about nat’s death. i probably still do, but i just wanted to say it all now before i might possibly never get to say them out loud again.

i actually don’t expect many to understand this because yalls so INCREDIBLY VALIDLY angry about nat’s death because she truthfully factually deserved better, no question about it

but fact of the matter remains, what she did was pure hearted selfless heroic sacrifice at its finest

and i just- even despite all the unfairness she had endured in life, the fact that it only solidified just how much of a SUPERHERO natasha romanoff truly is

nat’s death was incredibly sad, that much we all know, but it was also so awe inspiring imo. it made me so glad to have someone as selfless and heroic as her to look up to

and lbr, nat’s exit in the mcu is something that scarjo wants and as the actor that’s beautifully portrayed this character for almost 10 years, i think she deserves to get what she wants. i think we owe her that much for giving us her portrayal of nat all these years.

nat deserves better and maybe just maybe we’ll get it. one of the qualms about her death was the fact that she never got to live a life, to have a family aside from the avengers. but with the new movie coming out, hopefully we get exactly that.

nat deserves better, but i just want to acknowledge what she and we had. and what we had was imo one of the best characters in the entirety of the mcu

i am so grateful for all the creatives responsible for bringing nat to life. we’re all gonna miss the fuck out of her so goddamn much. let’s break some records for her one last ride. 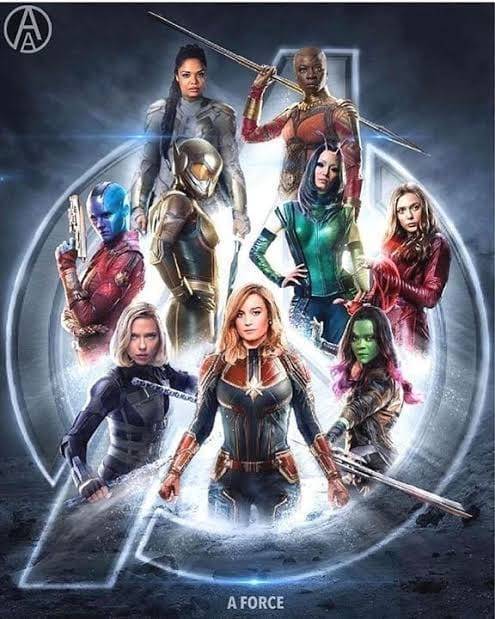 Gwyneth Paltrow on the All Female Avengers scene

Okay, so. I’m scrolling through Facebook and come across this post, and God knows why I decided to look at the comments because I knew that I’d see a bunch of white, middle-aged men complaining about Brie Larson and her acting and blah, blah, blah. And anyway, I can’t resist starting a fight on Facebook, so here’s my response:

To all the people (mostly men) hating on Captain Marvel: Do you wanna know why Carol Danvers had no personality? She was brainwashed. That’s literally her character’s backstory. Why wouldn’t she make a good leader? Because she was a hero before she got her powers? Because she never stopped overcoming the obstacles in her way to do the right thing? Because she’s a strong, independent female superhero? After 11 years of watching male dominated Marvel movies where all the females are reduced down to love interests, are you mad that there is finally female representation? Maybe that’s not what this is about. Or maybe it is. Instead of being glad that the Marvel fan base is growing and evolving into something more inclusive, you’re being hateful on Facebook. Write a letter to Marvel Studios. I wonder what that would accomplish. This isn’t what Stan Lee would have wanted. His entire career he represented equality through his work, like creating a black superhero during a time when people weren’t open minded. He was insanely ahead of his time. “We live in a diverse society - in fact, a diverse world - and we must learn to live in peace and with respect for each other.” “I have always included minority characters in my stories, often as heroes.” “Sooner or later, if man is ever to be worthy of his destiny, we must fill our hearts with tolerance.” It’s 2019. C'mon, guys. Let’s be better.

The next marvel movie will be all female avengers assembling to protect and defend the honour of their son, Spider-Man and prove to everyone that he’s innocent, that they’re badass as fuck and can do it better than the boys

This is kind of a small thing, but one thing I really appreciate about how Marvel has started treating their female characters is that they fight with their hair up (or in Okoye’s case, no hair at all). Like, for so long, Natasha did these insane fight sequences with long flowy hair, and while that was extremely hot, it just isn’t practical. As anyone with long hair will tell you, it’s impossible to do anything without it getting in your face. So let’s hear it for these characters for giving the middle finger to the over-sexualisation of women by putting their hair up.

you know what i don’t understand? i’ve heard so many people comment about the moment in endgame where all the women superheroes come together during the fight saying it was too forced or too in your face. why not just let this really cool thing happen that has never really happened before in a movie like this? why do people ask for representation and strong women characters and then when they get it they complain? enlighten me

There have been in general two opinions about the female avengers scene in Endgame: cringy and awesome.

Do you know how many cringy scenes there are in general in superhero movies? When Marvel and DC went overboard with epicness or jokes? When I could barely watch Aquaman or Thor: Ragnarok?? I agree, the scene is cheesy and I don’t understand why they put Wasp in the van only to get her out for this one scene. I agree that they could have made it much better and I agree that Captain Marvel could have easily gotten through the enemies without help.

I don’t love that scene because it is particularly good. I love it because young girls will watch it and see many different strong female leads in the spotlight in a franchise that is dominated by male leads. I love that they all come together to fight Thanos not because Carol needs help but because they all want to end it. I love how the women work together unlike the others who unsuccessfully tried to save the gauntlet one by one only to realize they can’t do it alone. It’s not weird that they all came together because the gauntlet was the focus of the entire battlefield.

It doesn’t matter that it is cringy, it matters that Marvel put the spotlight on female leads on purpose, maybe not as good as they could have done it, but definitely the first time that we could see an all-female strong team. To appreciate the characters that haven’t gotten the attention they need. To show young girls everywhere that they can become just as strong. How many years did they spent to lead up to Endgame? How many people, especially girls, finally got to watch it? Captain Marvel is one strong female lead and she had her spotlight, but what about girls who don’t identify with her? Marvel gave them a pretty diverse team to choose their heroines from. Why does this one scene made for women and girls everywhere gets torn down but years and years of cringy movies don’t? Y’all can’t be fucking serious.

Carol Danvers aka Captain Marvel aka my wife.

Holy shit I cannot get over the whole scene where all of the female Avengers gather to protect Peter. Like they are a group of mothers trying to protect their baby son. I got frikken shivers and my heart filled with love for those strong ass women protecting a child as if he were their own

Don’t think about Natasha who deserved to be standing tall, and spitting blood with an ash streaked face while she fought for her family, for her home and for herself

Don’t think of who we missed

If Marvel does a multiverse can we have the female version of the avengers considering that there are literally female characters of every avenger.
Kate bishop is Hawkeye, She-Hulk is the hulk, Iron heart is the equivalent of Iron man, Thor (the Jane foster one) as Thor and Sharron Carter as American dream (Captain America) Then add another badass in place of Black widow because you can’t replace Scarlett.

If there ever was a full female avengers team I can’t decide if I would rather they included the male avengers female counter parts (Iron hart, She-hulk, Thor…) or just completely start a new and show some characters we haven’t seen from before. 🤔

I am very very sorry for the long silence - what can I say, the lives of superheroes are very busy! Nevertheless there will be at least another two fellowship/avengers meet-ups this year!

First of all - I totally forgot to post the summary of our little picnic! I will try to do it during this weekend!

Now for the next events!
The avengers are going to Asgard! Well, not Asgard, but we will visit the book fair in Frankfurt. it will be an amazing (and probably pretty crazy) day, as we will go there by train in the morning, spend a few hours there and then go back on the same day. If this if going to be as epic as our Doctor WHo Day (which was also an event that pretty much lasted all day), it’s gonna be amazing.
So if you happen to be there, come and find us! It’s not sure yet whether all of our Avengers will be there, but you will be informed in time! (So far Nick Fury, Hawkeye, Loki, Thor and Captain America will be there for sure!
We will be in Frankfurt on the 17th October - looking forward to it very much!

Afterwards we will probably have smaller events - like movie marathons (we still need to re-watch Age of Ultron together!) or visiting christmas markets - before we will meet for our annual christmas meet-up! It’s come to be a fellowship tradition - everyone coming together to celebrate christmas, exchanging presents and having lunch/dinner in a gorgeous Irish pub with great atmosphere. It’s a great way to think of all the awesome stuff we did during the year - and also make plans for the year to come! Date tba.

To amazing times ahead!
Cap
for your
fellowship of 221B

#fellowship of 221b, #frankfurt book fair, #female avengers
6 notes · See All
Next Page