yes, i have a whole fic rec page and i keep asking people to send me any nct fic or writers they know so that i can read and reblog. so yes, if you want to recommend someone or recommend a fic of your own, feel free. i usually get to reading it immediately ^-^

Six months after a devastating attack against Earth, Sheppard gets a promotion and a reassignment to Russia, where he encounters evil aliens, Rodney McKay, SG-1, a possible plot against him – and a series of unexplained visions.

making me choose between make it better and dummies in love (by my girl @bceky i have the honor of being in a mutual with her now LOVE that for me!!! y’all know i stay recommending this one!!! she’s so sweet i geeked when we met) is simply unrealistic they’re both too good but i think i’m going w wee dummies in love for the whole finished factor thank you for coming to my ted talk

(this post is ok to promo your own works on!!)

All The Way To Your Door by kyluxtrashcompactor

Clarke gets sick, and the person she needs the most isn’t there.
Luckily, Murphy and Raven are there to distract her.

I just read all 350,000 words of The Bureaucratic Error (and it’s not even finished yet. A regularly updated WIP if you’re looking for one!) Come for the Remadora feelings, stay for the amazing characterization of Remus and Sirius. I’m especially enjoying the author’s exploration of who Tonks, Sirius and Remus become in an alternate reality when they know what ought to have happened. To really get meta with it, this story considers if we’re fated to become the same version of ourselves in every reality, and if one man can screw with time enough to save lives without changing the people he’s meant to love.

Ian can’t stand the new chef at the restaurant he works at. Until he gets to know him. Then things really start to heat up.

#gallavich fic rec, #fic rec, #this is wonderful
2 notes · See All
gallavich-and-millagherLink
Sexual Harassment in the Workplace - Shamelessquestions (KagekitsuneXXX) - Shameless (US) [Archive of Our Own]https://archiveofourown.org/works/1349920

Mickey just needs to keep his head down and stay out of trouble at his new job. Still trouble always manages to find him and when it takes the form of his red haired boss, Mickey’s not sure he can resist even if he wanted to. (Gallavich AU)

When Yevgeny is in his first year of college, a man contacts him claiming to have information about his biological father.

Comments: I do recall enjoying this fic and I hope y’all like it too.

Synopsis: Danny died and became full ghost and is now working as Clockwork’s Apprentice. When Clockwork see’s trouble in the Human Realm two years later, he sends Danny back into Casper High as a new student named Daniel Time. But trying to hide his true identity and stop the rising threat is no easy task.

Itamen hides, Avad worries, and the constellation of the Palace orbits the Sun.

“The things I learned when I was young led me to where I am today,” she said, a little warily. She wanted to see Itamen safe, and though being able to fight with sword and bow and spear was no guarantee of that, it certainly helped. It would take years to build the requisite skill; better to start now. “Some of them are distasteful, yes, but this world is not kind.”

Nasadi nodded slowly, like it was an answer she’d expected. “And if it was,” she asked, “would you have chosen to learn them?”

Vanasha faltered then, trailing to a halt, and Nasadi slowed and turned, facing her. They were alone in the hallway, though Vanasha’s eyes and ears, on instinct, sought out the slightest change – a flicker of shadow or a whisper of feet. But there was only the pale morning light and the faintest breeze filtering in through the nearest window.

What would she have chosen, if the world had been different? If she’d grown up during a reign like Avad’s, if her family had not suffered so much? Vanasha was perturbed to find that she had no immediate and certain answer. “… I don’t know,” she said, but it wasn’t as honest as it could have been. No, she thought. Perhaps not.

Summary: It’s become apparent to Aziraphale that there has been some fundamental miscommunication between himself and Crowley as to the nature of their relationship.  Unfortunately, Crowley keeps running away every time he tries to set the record straight.

Comments: I love Aziraphale’s solution to this problem - demon summoning to make Crowley actually listen to him! It’s adorable. He’s Crowley, trying to be the big scary demon and Aziraphale is just rolling his eyes waiting for Crowley to notice who, exactly, called him.

Summary: The trouble with not saying things directly for thousands of years, is that sometimes you forget to be clear once you can actually speak openly.

Morty’s a creep and Rick doesn’t let him forget it. He sneers at him, degrades him at every opportunity. Calls him a nasty, disgusting little preteen sweat monster who can’t stop jerking it long enough to fetch his grandpa a goddamn screwdriver.

Morty can’t exactly fault him that assessment. He resents it, sure- so what if he doesn’t quite change his briefs every day- but he’d be lying if he said he didn’t enjoy Rick calling him a piece of shit adolescent fuckboy every now and then. Just another little reminder that Rick didn’t give a shit what Morty called himself. Or rather, he gave just enough of a shit to shuffle the intestines of the last piece of Rick-trash who called him a Morticia, but not quite enough of a shit to let Morty get away with smuggling half as many megaseeds as he was technically capable of smuggling.

Rick didn’t mock Morty’s cup size anymore either. Nowadays it was Morty’s pitiful attempts at growing a mustache- a goal that was aspirational at best, until late December, not long after Beth and Jerry’s latest shouting match about whether they had two daughters or one.

“J-Jeezus Christ, Morty,” Rick laughs as he slouches past the open bathroom door, leaning in when he sees Morty standing on his toes in front of the mirror. “Learn to sh-eurrgh-ave for f-fuck’s sake, y-you look like you post fucking r-reaction vids on YouTube.”

“Shut the f-fuck up, Rick!” Morty snaps, kicking the door closed on Rick’s leering face with his foot. He leans right up against the mirror and examines his upper lip so closely that his breath fogs up the glass. He rubs his dirty fingertips under his nose. Yeah, it’s there alright. The beginnings of a really shitty-looking mustache.

Morty’s heart feels like it’s going to beat out of his chest. He drops his hands to the sink and clenches both sides of it, head bowed, taking shaky breaths.

He doesn’t want to shave it, but…

Morty’s face is bright red with embarrassed frustration. He shoves the door open and stomps halfway down the stairs, leaning down over the railing so he can see the back of Rick’s head where he sits on the couch. He’s lying with his feet up, limbs sprawled in every direction, watching something mindless and vaguely improvisational on the cable box.

Morty wanders over and flops down onto the couch next to him. “Y-you’re right, it sucks,” he admits. “H-how do I shave it off?”

“Fucking f-eurrgh-inally,” says Rick, already turning off the TV and getting to his feet. “Alright, come on, w-we’re finally going to get you th-that shaving lesson. Man to man, y’know, since Jerry’s not fucking likely… The fuck are you standing there for you f-fucking asshole? Go get my lasers from the garage and meet me upstairs.” 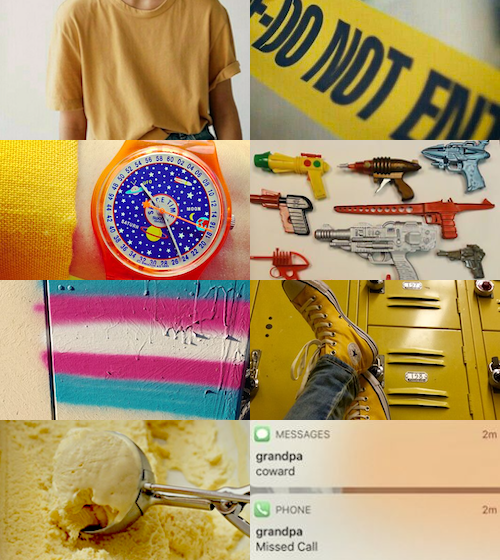 #rick and morty, #morty smith, #rick sanchez, #r&m, #ficlet, #fic rec, #my fic, #aesthetic, #trans!morty, #genderqueer!morty, #implied transphobia, #on jerry's part, #well I've been thinking about writing an r&m fic, #for a while now, #but thus far I've only scraped together this here ficlet, #I've got too much good terror content lined up, #to get distracted now, #but still, #also I'm only allowed to make fun of reaction vids bc I'm a HUGE blind wave fan
4 notes · See All
themandylionLink
Falling Through the Multiverse - njw - DCU [Archive of Our Own]https://archiveofourown.org/works/24540895

Tim wakes up in the Cave and opens his eyes. He glances around, his heart seizing at what he sees. The cup of coffee Alfred set at his elbow earlier is gone. Based on the undisturbed layer of dust which blankets the surface of the desk, it looks like it was never there in the first place.

“No,” he whispers, throat tightening. This isn’t right.

The feeling that he is somewhere else, somewhere he isn’t supposed to be, grows exponentially as he takes in a hundred tiny differences in his surroundings, from the level of the Batcomputer tech to the contours of the chair he’s sitting in. This wasn’t supposed to happen.

He realizes with a growing sense of horror that if he’s fallen into a new universe again—this time without the impetus of having recently activated the device—then there’s no guarantee it won’t happen again. And again.

Oh, god.
*
This story is standalone and can be read separately from the rest of the series.
*
For the tumblr Jaytim Week day four free prompt.

This is post-canon. John and Rodney. Pretty much it. No smut.

I’ve got a bunch of fics in my head that I want to get out and on paper (screen?). I’ve come to find writing as being therapeutic lately and I’m needing some therapy.

That being said, I want to see what YOU want to see. I may write for myself but I also write to entertain you. So please drop me an ask, a message, a comment on this post. Send me your requests or tell me which of my nuggets sounds interesting to you, even if you think I should tweak them. I AM OPEN FOR ANYTHING.

Some fic ideas that I have:

Please let me know what tickles your fancy, if you have any requests. My ask box is ALWAYS open!

Also any feedback on my previous fics, where you think I could improve, what you like and don’t like. Your feedback makes me a better writer.

All my love and treat people with kindness 🧡💛