Lefty: I really like yellow and red! Definitely not because they’re the same colour as me, noooo

Lefty: also, did you guys get Mari to say anything, I dunno, major while I was asleep?

Lefty: yeah, we just need to be patient, for now at least

#william afton, #dave miller, #the happy man, #fritz has been working with faz ent. since 1980, #back then william and her did get along at some point don't know what happened there., #fritz smith, #fnaf, #fnaf 4
0 notes · See All
matrix--lazyText

then this is him in 1994, the final year of him being alive, well not exactly.

you’d think he’d make his hair go back to its original state in the 1980s but nope, he let the dave years take over his life.

Am I about to make a powerpoint presentation about the fnaf movie instead of paying attention in class? That’s a secret I’ll never tell!  My grades migth will slip!  XoXo, happy fnaf fan.

Been watching some Fnaf news videos and thinkin’ about Security Breach tonight. That Funko statue of “Vanny and Vanessa” is deffinetly interesting to me, and after watching Dawko’s video talking about it, it seems i’m not alone. While it’s always possible to have multiple characters with similar or the same name in a series, after all we seem to have multiple Jeremys in the series, it’s also not necessarily unusual to show multiple versions of a character in a vignette. Someone however pointed out something interesting though from the teaser trailer; Vanny’s voice sound’s robotic and her eyes are glowing. What if Vanny made her own version of a springlock suit?

I’m starting to lean into the idea that Vanessa and Vanny probably are actually the same person, and she’s using the dule nature of a springlock style suit to cast suspicion away from her as she pretends to look for intruders under the vissage of a nightguard. The ‘Nessa’ mentioned in the VR game also deffinetly seems to be dealing with some kind of mind control. However, it doesn’t seem like she’s been comepletely controlled which could also explain why we’re seing this importance being put on the two versions of here. Really though the main reason i’m having a hard time accepting that Vanny and Vanessa are different characters in spite of the Funko statue is simply that I’m finding it hard to rationalize having two characters with the same name being introduced in the same game.

I get that Vanny/Vanessa has been around in Help Wanted, as well as talked about a bit in Special Delivery, but tecnically she hasn’t been formally introduced yet in the series. She wasn’t even in the main game of Fnaf: VR HW. She was basically just teased as a reward for completing DLC. I don’t think the multiple characters with the same name as a joke or misdirection is really going to work quite right if one of them isn’t already an established character. I also can’t think of or find any other name “Vanny” could be short for, so it seems unlikely that it’s going to be a case of them actually having different names that happen to have the same shortened form.

The one thing that keeps be from being confident on this theory yet is that in Fnaf AR SD, 'ness’ is said to supposedly have rainbow hair highlights that we have yet to be seen anywhere. Who knows though! There could always be three Vanessa’s that are going to have to fight for dominance as the one true 'Nessa! I highly doubt it, but it wouldn’t be the strangest thing in this series!

In which JJ saves the day, the Puppet finally sees the writing on the wall, and William Afton does something useful for the first time in his existence.

alright so i got this idea for my william in the au after rewatching dawko’s fnaf short film from last year and that is afton basically steals the wallet of the child’s parent just so he can know their name and not look suspicious at all.

it’s decided, im making a fnaf ask blog. ill reblog with the @ once i finish the starting comic. that’ll probably be like… idk friday? we’ll see.

me n a friend drew a bunch of pride flag inspired art so here’s a lesbian chica i drew >:3 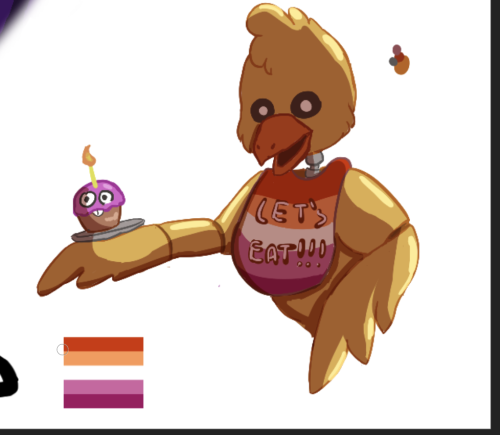 Lefty: and thank god i did, I’m very glad it’s a feature I have, but. Why do I have a squeaky nose if I’m just meant to catch Mari? Another question to add to the list, jeez