Tumgir
AboutPrivacy Policy
AboutPrivacy Policy
Visit Blog
Explore Tumblr blogs with no restrictions, modern design and the best experience.
Fun Fact
Pressing J while looking at a Tumblr blog or home feed will scroll up on the page, pressing K will scroll down. This is helpful considering a lot of the Tumblrs feature infinite scrolling.
Trending Blogs
#fnaf fanfiction
hauntedbythedead
Text

YO FOLLOWERS do yall know of any good discords for fnaf? i left all the ones i was in and i wanna find someone to help me flesh out the Start Of Healing story

Michael Afton is a single dad struggling to make ends meet. His new security job at the family-run Freddy Fazbear’s Pizza seems typical at first, but he quickly discovers that the restaurant’s daytime merriment is nothing but a facade. When his own daughter goes missing, he finds himself frantically searching for answers with the help of the ailing owner’s daughter, Charlie. They soon discover that there’s a sinister plot in the works and the madman who orchestrated it won’t let them get in his way.

Shoutout for my friend @crazyfanatic97 and their really wonderful story over on AO3, The Restless Souls! https://archiveofourown.org/works/22839637/chapters/54586675 It’s a continuation of The Silver Eyes that doesn’t follow the rest of the trilogy, and it’s so good and well written. I haven’t caught up yet, but it’s already so good hfbdhufbruef! Please give them a chance and go check it out, you deffo won’t regret it! :D

Me: *giving foxy earrings because I think it’s badass and cool*

Brain: GIVE HIM 3 MORE THEN

This Blog is in Portuguese in English

English:it’s fine with you, you’re already wondering who this new animatronics is, I’ll explain. She is not an official character from the original game, but she is a character created by a fan of the game, that is, she is a character from Navio Entre Á Baby x Ballora Is Or Whether The Two They Dated Together And Made This Animatronic As A Daughter Of Them animatronic she for Being Daughter Gives Ballora And Baby Both She Has The Same Characteristics And Personality Of Baby And Gives Ballora

Look, we just call a warning. About the Copyright of this Character you can make comic Fanarts Anything And Even a Fan-game but just don’t forget to give credits to me Ok? ._.

So that’s it bye until the next Blog Guys …

Note: Okay so this is the first actual writing thing I’m posting, I have a whole thing I’m doing for FNAF but this is just a one-shot type thing that I got inspiration for while listening to Bonnie’s Lullaby and thought it would be fun to post. Also, tell me if there’s a trigger I missed, I tried to stretch my imagination to it’s extreme for triggers but I may have missed some so please let me know.

The door was locked. He had locked me in again. At least this time I was in my room. I sat on my bed, huddled against the wall for safety. My eyes darted across the room. It was dark and the silence rang in my ears, putting me on edge. Out of the corner of my eye, a shadow moved and I jumped, snapping my head in that direction, only to find nothing there. There was nothing there. They couldn’t get me. I was awake. They could only get me when I slept.

I clutched the golden stuffed bear that my father had given me. He was my best friend in the whole world, he always watched over me and protected me. My other four friend- Foxy, Chica, Freddy and Bonnie- sat in the corner. They were less talkative than Fredbear but equally faithful. I tried not to think about the fact I had no other friends, or my bully of a brother, Micheal, that Mummy said was just playing with me but he was so mean, or… or it…

That day… Daddy had taken me to that wretched place to play with Charlie, but I knew now that wasn’t his motive. I wish I had actually played with her, instead of watching the show by myself. I had caught glimpses of her and Daddy talking, and I remember watching them go to the kitchen, but I had shrugged it off. When some time passed and neither of them came back, I knew something was up. But… I wasn’t allowed to leave the building, my Security Puppet wouldn’t let me. They got rid of those, after… After they found her…

I clutched Fredbear closer, no, I couldn’t think about that now I just needed to focus on staying awake, so as long as I stay awake, they won’t get me. Fredbear looked up at me.

“Sleep, little one.” He told me, but I shook my head. I knew this was coming.

“It shall be okay. It’s just a dream. Tomorrow is another day.” He said, like he did every night. I shook my head, he didn’t understand. Every night I wake up in a room that is not mine, alone, having to fend them off at every turn and at the end of the dream, each night, I see the same things. Mechanical jaws crushing me, the sound of laughter turned terrified screams, blood, so much blood, and pain. Pain that I can barely comprehend when I’m not feeling it. And then, I wake up. I wake up and it’s fear and pain and fear and pain. It never stops. I just want it all to stop.

“I will put you back together.” Fredbear whispered and I froze.

“W… what?” I said, but there was no answer. A light turned on in the centre of my room, illuminating a white box that I was certain wasn’t there before. I was confused and frightened, but the box felt like it was… calling to me. Slowly, I got up, forgetting completely about Fredbear and my friends, my room,  and the dreams. I cautiously walked towards it. There were two padlocks on it, but I knew where the key was.

I turned back to Fredbear, who was sitting upright and watching me from the bed. I took a step towards him and the seams of his mouth started to tear into a great, big grin. The reflection off of the metal could be seen within the fluff from inside of his jaws.

I reached in and took the key from his mouth before turning back to the box, only to find the light had turned a frightening shade of red and the box had a bright yellow hue to it that was somehow distinct against the blood-red lighting. I put the key in one of the locks, turned it and both of the latches opened. The locks and the key started to fade into nothing.

I stared at the golden box, suddenly unsure. I knew whatever I found in it, there would be no turning back. But… Did I want to keep reliving this over and over? This cycle of pain and fear? No. No, I had to open it. I had to know.

I put my hand at either side of the lid and lifted it up. There was a flash of white, burning light and then…! A memory. A memory of That Day. My birthday. The day when Michael took his torment too far and I felt the jaws of death surround me. That’s right… I’m dead, aren’t I? Or, dying. I’m almost there, though.

He said he would put me back together? But, he can’t. I’m slipping away and there’s nothing either of us can do about it. I smiled, tears falling down my face. Oh, how cruel is this? My life was filled with mostly pain and fear and then was mercilessly ripped from me before I ever got to be a teenager, let alone an adult. Killed by my father’s creation, by my own brother. I would laugh, but I was too busy crying.

There was a knock at the door and I froze. The box was gone and so was Fredbear. No, I’m not ready to go yet, they can’t take me…! Another knock and the door handle slowly turned. I looked around for a way out, any way out, but when I looked away, the room was no longer mine but the one that plagued my dreams. When I looked back, there was a creature standing in the middle of the room, looming over me.

It was an 8ft tall, translucent black mechanical bear, with razor-sharp, blood-stained teeth and glowing red eyes. It looked like it was made of shadows, or nightmares. It stared down at me, it’s blue and red claws outstretched at either side of it.

“It is time, child.” It spoke, its voice boomed quietly, deep and gravely, it sounded as if it’s vocal cords were rusted. It reminded me of a dark, dank cave filled with bats and dripping water and the unknown.

“No… I don’t want to go, yet. Can’t I stay a little longer?” I pleaded, my voice small and scared, much like I was. The creature slowly shook its head, all of its movements were slow and mechanical.

“You’ve stayed here as long as you could. You must come with me. But do not fear, I shall not hurt you. I am only a guide.” It assured, but I wasn’t so certain.

“Then why do you look like that?” I asked.

“I take the form of whatever death looks like to you. Whether it be an angel, a skeleton in a dark cloak, or, in this case, an animatronic bear made of fear and suffering.” It explained. I took a moment to think this over.

“In a sense. I cannot choose my shape, however.” It replied. I suppose that made sense. What it’s saying could be true, but even if it wasn’t, what was my alternative, anyway? The nightmares? Just the thought of having to go back to that sent shivers up and down my spine. No, I had to go with it, even though I would rather go home and see my mother and sister, heck, even my brother, again.

“Where are you taking me?” I asked before I fully committed to the decision. It did not answer for a moment, before sticking its claws out, presumably for me to grab. I hesitated for a moment before reluctantly reaching out my hand and grabbing the claw. I expected it to be cold as it wrapped its shadowy metallic hand around mine, but it was surprisingly warm and comforting. Welcoming, even.

“We are going to give you your happiest day, little one. Doesn’t that sound nice? You are so very tired, I can tell, you deserve to rest.” I thought about that for a moment. As I thought, the exhaustion began to weigh me down more and more, thick and heavy. I leaned against the creature, closing my eyes and appreciating it’s warmth.

Send me some William related art or writing requests uwu

I need something to fill my Sunday

me: *just minding my own buisness*

me: HOLY SHIT I HAVE A WHOLE ASS FUNFRED X READER I HAVENT WORKED ON IN MONTHS- 🏃🏾💨

Please click the images, then open image in new tab and zoom into full size. Otherwise it will be hard to read and look ugly.

So uh, sorry for skipping a week there. Depression and AADHD kinda kicking my butt and I had to more backlog pages to tide me over :P Which is why, yes, I am going on hiatus until about January next year, so I can build up the backlog again.

Click Here to read to comic from the beginning.

Credits and How I Make Stuff:  https://www.deviantart.com/0rcv0/art/Credits-for-Coping-Mechanism-847179713 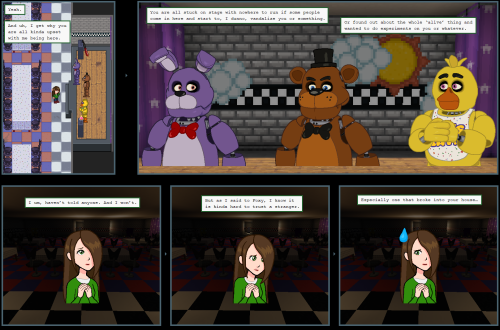 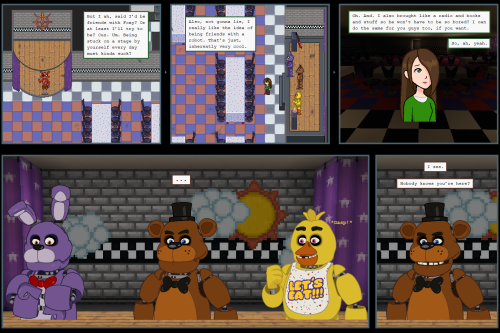 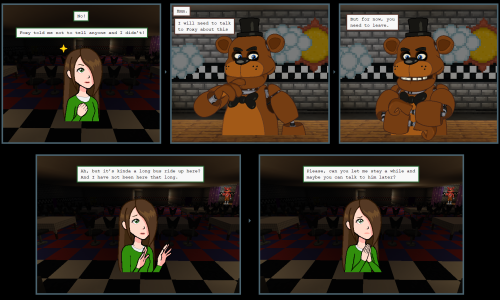