Archen constantly flap their arms while walking, trying to fly

Tauraro Eevee are actually bred differently from the more common variety in an attempt to stabilize its unsteady DNA. Because of this, Tauraro Eevee lose access to the other 8 Eeveelutions the rest of the world knows, but can evolve into 5 exclusive native Eeveelutions by simply letting it level up while its type is partially changed with a type Scarf.

Tauraro Eevee are a lot more easy going and ridiculously friendly. They actually lack the ability to process negative emotion until they evolve, and thus are constantly in a state of happiness. They make great therapy pets, and their fur is wonderfully soft.

Evolves into Wispeon with the Wisp Scarf

Evolves into Toxeon with the Venom Scarf

Evolves into Drakeon with the Drake Scarf

Evolves into Eeveeon with the Average Scarf

Sailablaze are thought to be a mistake in the fossil restoration program given that new evidence points to their original fossils being more amphibious in nature. However, Sailablaze are still invaluable to paleontology given that they behave in a primitive manner and are somewhat of a key to understanding how ancient pokemon would have behaved. Its eyes track the slightest movements, but if the opponents are still, it cannot see them.

Underneath the flames on it’s back is a sail that some scientists believe help to regulate temperature. However, most believe it is simply a mold for its flames, as flames spew out at the lightest provocation or sign of happiness. Its jaw strength is enough to crunch a very thick tree in half, and once it has something it will never let go. However, its jaw strength is so weak going in the opposite direction that a Paras can pinch and hold it closed. Although they do hunt for meat, they are more than happy to substitute for sugary goods- in all known restored fossils, Sailablaze perform what can only be described as a “happy dance” when offered a poffin.

Back in 2011 I had hastily made a fakemon called Pyraptor, which at the time i thought looked decent. 9 years later I can say it did not. As luck would have it, I found an old toy while doing some cleaning, it was an orange Spinosaurus which shot lasers when you pressed in on it’s back. Back as a kid, I decided it would be a fire type that shot lasers from its mouth, but I think I see this more as a physical attacker. I edited my Pyraptor Sprite to be a bit closer to what I imagined my spinosaurus pokemon would have been as a kid, and while I’m not 100% happy with it, I am fond to say I restored the fossil of my concept I had some 20 years ago.

I think I’ll just scratch sprite its evolution at some point and either scrap it’s old design or repurpose it.

As for Eevee, I’m not 100% in love with the shading and may go back to fix that at some point. It was just an edit I made maybe a year or two ago that I decided just to finish up, but I was also rather tired. The eyes are always closed, the ears are droopy, and it’s always smiling, and tbh if that’s not a good boy i don’t know what is.

Anyway, ask any questions if you want. 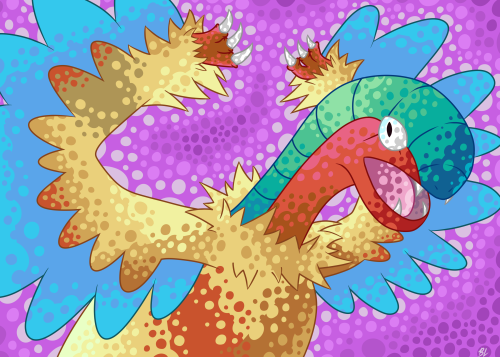 Anorith was drawn for a rock type Pokémon ATC swap! I wanted to try to pose Anorith a bit, but it was kind of difficult considering his limited movability. The fossil Pokémon are some of my favorite more unique methods of obtaining Pokémon. The background and the fossil in the background are based on different Anorith Pokémon cards. 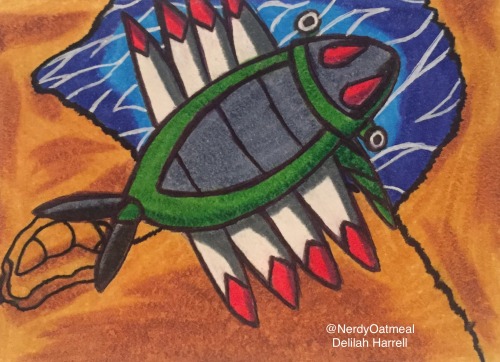 I try to do that at my lab to a degree, I have small little areas that attempt to mirror a natural environment for my Pokemon and the ones I’m studying, but of course it’s on a very small scale. It would be a dream to be able to provide a full natural environment for fossil Pokemon, but when it comes to funding research of fossil Pokemon most money goes into restoration.

The study of reviving extinct creatures from fossils is an exciting and ever-changing field. While it has advanced enough to create new organisms from fossil material, the authenticity of the results has been questioned. Specimens of Tyrantrum in particular usually exhibit collars of feathers, but rare variants include collars of osteoderms or a full-body covering of feathers. While this science is imperfect, the author does not feel it worthy of comparison to the “mad science” performed by Liss et al. in the Galar region.

Here are the non-shiny versions of the pics from yesterday. Enjoy!

The “shiny” condition, as it is often called, is caused due to a genetic difference in pigmentation like melanism or albinism. This condition is harder to define however, as it does not affect all creatures in the same way. While members of the same species exhibit the gene identically to one another, specimens are highly rare and scientists are still not sure how this expressive and variable gene works.

Tyrantrum is finally here and with it comes the end of the realistic fossil Pokémon art! It is bittersweet, but I am happy to have finally finished these. Tyrantrum especially turned out really well (because I took forever on it) and I’ll be sharing some non-shiny pics and a group shot soon.

Everyone knows what Pokemon is, but hardly anyone over the age of 50 really understand it. Us members of the Millenials, Gen Z, and Gen Alpha are those most familiar with the nuances of the franchise. Fossil Pokemon are pretty nifty. Do all of us know what inspired them all?

Most behavior documented about revived fossil species is observed in battle or under lab conditions. We very rarely get to see what might be “natural” behavior, as their are almost no natural environments that have fossil Pokemon. 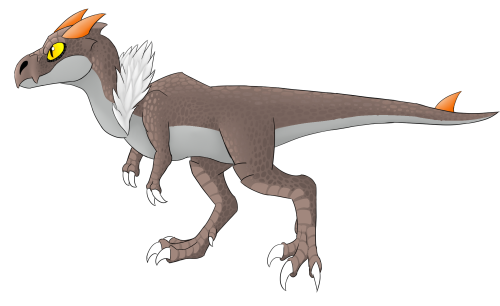 #pokemon, #tyrunt, #fossil pokemon, #pokemon redesign, #I mean its not a lot its just slightly more stylized but still
12 notes · See All
plasmagruntcalvinText

Decided to have a little fun and made this little “Reconstruction” of a realistic Aurorus.

Fossils event/Rock-type announced. (Also, you have to appreciate Google translate fuckups sometimes. Squirrel-type, of all things…)

Fossil Pokémon! Some cute not so little pokes to celebrate me finally being able to do art again

So I had a dream where Goodra were Iguanodons so I had to draw it!

“I’M GONNA GET THIS PIKACHU”

It’s hard to describe, to put it simply they looked powerful. More muscles than their non-battling counterparts, a few scars, and just a look of pride in their eyes. You can also tell that they were well taken care of, they had a healthy sheen to them and just a healthy appearance overall.

Injuries tend to be more common in first time Cranidos trainers than experienced handlers or breeders, because you need to have a decent setup for the Pokémon to avoid them turning to you as a target for even a friendly headbutt.

Having at least one other Pokémon that the Cranidos can spar with is important. If not multiple Cranidos, Dubwool are popular nanny Pokémon in that regard. It is also relatively easy to clicker train a young Cranidos to target specific training bags when they want to let off some steam. The lab at the Oreburgh Museum maintains trees as well as an artificial clay cliff that their Cranidos can practice on.

Ancient Pokémon Expedition Operations is an organization that Roark started himself, as a way to share his love of Fossils with others. It tends to wear many hats, so to speak, with members leading tours and Fossil-digging workshops on a daily basis, while also being involved in academic research whenever requested. They are also sometimes called on by the Oreburgh Mining Museum for consultation or collaboration.