Thick as Thieves by taeyongseo

“You’re a thief, Park Jisung, and you always will be. Come home. I promise what we’re planning will be worth your time.”

I will not be finishing the sequel to Still Good tonight on account of my brother ate the last of the ice cream. Yes these two things are related. Just know that there is a sequel in the works, and I will someday finish it. And take revenge on my brother.

you know what I’m really in love with right now?

the old guards found family dynamic and how well they fit together. How easily they take in Nile and agree to help and protect her. Andys smile while they reunite and Nicky loses a bet. With how much grief they talk about Quynh. Just,,, everything.

I wanna see so much of Nile finding her place in this family and feeling at home with them.

on that note im also in love with all the fanfics and authors who explore that and whose words make me fall in love with the world again.

Her daughter spoke! She was just selective who to. Cass could work with this; this was her ball game!! Excitement filled her veins as she carefully hugged the girl. After the bathing drama she didn’t want to traumatise her too much more. Her daughter could talk and chose to speak to her!! To her of all people. If Cass hadn’t claimed her as her own already this would have sealed the deal.

The girl jabbed Cass breaking the hug up. She was still pouting but now also looking disgruntled. The hug, and touch, not having the same effect on her as it did Cass. The murmur of “Chocolate” came out her mouth again, still almost silent that you had to be keen to notice. Luckily this was Cass and with all her past, the subtleties would always be noticed. Her daughter would always been seen/heard and listened to in Cass’s world.

As a little kid growing up I’d always wondered why I found myself so intrigued by women. On screen as well, the women were… well nothing less than heart-eyes, intrigue, badass and in awe of all rolled into one worthy.

Guess looking back now… a lot of stuff makes sense. Just took a little while to break out/free and accept that I am here and queer! A Lesbian and proud 🌈💛

Still a goober at heart … Which frankly explains a lot as well haha! 👀😅

Summary: Jack gets a migraine for his birthday

I kinda didn’t think I’d write and finish a fic for today’s theme, but I did.

So take this as a starting point for my fics in the GEAW series. I don’t know how many more fics there’ll be for me, but I look forward to see what the muse has to say.

Huge thanks to @thethistlegirl for her help on suggesting Jack having migraines too when I needed to kickstart my muse on something soft to write, and for the quick beta.

** I’m happy to share the bonus fic I wrote for “Found: A Clone Wars Zine” as a stretch goal! This was such an amazing project to be a part of, and I’m so thankful to the mods for allowing me to participate, and for letting me write an extra story for it. ** @foundaclonewarszine

Click “Keep Reading” to stay on Tumblr, or read it on AO3

He lay on his cot, eyes closed, arms folded behind his head. Outside the tent, he heard the quiet voices of Commanders Ponds and Grey as they made the rounds. Laughter carried across the camp as the men talked, thermal lamps hummed, all while the skeletal branches of the massive trees outside raked together. But none of those noises were keeping him awake.

The room went silent. Everyone at the meeting, slowly, and with a bit of fear, looked at the tall man sitting in the throne. His four, blood-red eyes were staring at the small figure.

The Dark Lord was always quite intimidating, even with his rather human face and voice. The body without any extra limbs also helped conceive the false image of humanity, but everyone knew he wasn’t not even quite near human. He was a creature of the Great Abyss, were all the shadows came from, and even his recreating of a human figure was imperfect. The hands didn’t have nails, but claws. The way he walked was too elegant, too controled, too unnatural, as if something watched humans walk and learnt how to do it, only to perfect the technique. His teeth were too sharp, too shiny, and his four eyes were devoid of a human glance.

The Dark Lord’s hair was too white, as if someone photoshoped it. No light glimmed from them, and no light would ever shine on them.

And, finally, the Dark Lord was way too tall for an average human. More than two meters, and more, when he was quite irritated. And no one would even dare to irritate him; such a well-educated gentleman. Such a well-educated, terribly uncanny, terribly powerful, King of the Void, gentleman.

And, yet, he looked at the small figure, the one who asked for him in such a small shy voice, with such deep human surprise, even his closest friends were shoocked for a second.

The not quite human, but still more human than him, young girl, looked at the Dark Lord with her violet eyes. Her blue hair was gently wrapped up in a ponytail, and her pink dress showing off the glitter and sparkles of the delicate fabrics. She was small, merely a child, and everyone on the room was so big compared to her. And, still, the Chosen One approached the adults.

The Dark Lord didn’t respond the young girl’s call, not for several seconds before he recomposed himself. “Yes, dear?”, he asked back, still in his throne.

That must have been the correct answer to the call, for the Chosen One took quick steps in his direction, her small hands hiding something. “I did the thing”, she said. “Look, look”.

She stretched her arms in his direction before opening up her hands.

A small, crystal flower emerged from in-between the Chosen One’s fingers, streching, growing only a tiny bit, enough so that everyone in the room could see the delicate and shiny work.

The Dark Lord got up from his throne, coming close enough to the child so that he could hold her in his gigantic arms. And he did it, and she, in response, put the crystal flower up close for him to see.

Using one of the claws from his free arm, the took the flower away from the Chosen One’s hands. “I see”, he told her. “Such intrincate work. You are growing, child”.

“Growing up?”, she asked him, hesitantly.

“No, growing in”, he corrected her. “This is a good work. You are finally becoming you”.

The Chosen One smiled, her small sharp teeth finally showing. She wasn’t hiding herself as much as she was, before he took her in, but she wasn’t fully healed from what happenned. She scar was already too deep, and she had grew too much. To reach it would require years, and that maybe wouldn’t work.

But, still. It was nice - even good - to see the young one finally not seeing herself as a being of evil, like others told her.

“Everyone”, the Dark Lord called, and as he did, everyone in the room looked at him. “Clap your hands. This is her first crystal flower”.

They obeyed without questioning - more because they wanted to see her reaction, and they loved when her eyes lightned and she was finally happy, even if for a moment. And the Chosen One smiled and chuckled, clapping back.

“They are for you, not your flower”, the Dark Lord corrected her, but she didn’t care. “Now, go to your room. Sleep a bit, play with your toys, watch a movie, bother the others”.

“Can I grab a candy from the kitchen?”

“Of course you can. Consume it”, he recommended. “Grab the ones from the back, they taste better”.

“Okay”, she murmured, before hugging him and leaving his embrace. “Bye, dad”.

“Have a good night”, he responded, not moving until the Chosen One was out of the room and the door was once again closed.

It took him some time to see the others staring at him.

The Ghost Lady smiled a haunted smile from the back of the group, her not very delicate fingers tapping in the table. “You are a dad”, she said, when the Dark Lord looked at her with sharp eyes.

“She called you ‘dad’, and you didn’t correct her”.

“I would have already become her mother by that point of time”, the Ghost Lady responded, before turning her attention to the Black Knight. “Did you record this?”

“Oh, I sure did”, the armour responded, smiling.

“Delete it”, the Dark Lord ordered.

“I am no fool, Knight. I know when you lie, and you know very well-”

The Dark Lord turned his attention to the Evening’s Eyes, his first friend and his right-arm, the one who paid attention to everything, and the only reasonable soul in that unlikely familiar group.

“You can fill in the adoption papers now”, he said, before conjuring the paperwork from nothing.

The Ghost Lady stared the Black Knight with confusion. He merely shrugged, which was wise when you worked with the Dark Lord, the one everyone feared, the Terror of the Night, the Void King, and the one who decided to adopt a child to protect her from ignorant fools from the Kingdom of Light.

Accepting applications for a squire that I am skeptical of until, slowly but surely, they become the found family I would die for !!! Serious inquiries only !!!

K this post is going to be a hot mess but first of all I apologize for cross tagging hmu if you want a tag removed. Ôk back on topic

Are you queer? Do you like space? Do you like an idea of a found family space queer indie game? Yes? Do I have a game for you! Its called A Long Journey to an Uncertain End. Its right now on kickstarter and guess what? They hit their goal!!! WOO! But they still have 67 hours left

and there are stretch goals

Ok im showing you stretch goals and you dont even know whats the game about. Fair I cant write a coherent post.

So this game is about a crew and their ship doing jobs and trying to stay away from your abusive ex. Fun fact: You are the ship! And you also have a human form which you can customize AND you can also customize your pronouns. (really you can use any pronouns, including neopronouns)!

And now the important part! Your crew!!!

In order from left to right: Matias (he/him), Truly (they/them), Aylah (she/her), Zeke (she/her), Denny (he/him) and the adorable C.O.R.G.I (ze/zir). I love all of them so much. You can read about them on the game’s kickstarter page but just saying Denny uses a hoverchair and Matias is a drag queen!!

Ok but how the jobs work? Well you select a job you want to do, then you pick crew member/s who you want to send, then theres a text system where you pick options which influence the outcome of the job! You can get supplies or fuel or favors by being successful!

I hope you are intrigued by now! If you think this might be your thing please check out the game’s kickstarter and the demo for the game. 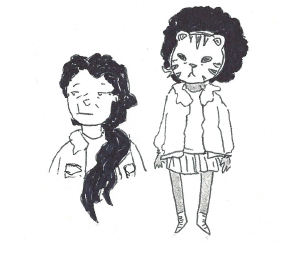 I am so excited to share with you the book, Like Home written by Louis Onome. Thank you so much to Turn the Page Tours for the opportunity to be on this blog tour!

I received an eARC of this book from the publisher in…