Here is my Bonnie and Freddy! Bonnie (in my au) always likes to wear big sweaters, hoodies and likes to keep his ears down and have clips in his hair and is a shy boi. Freddy (in my au) does not always wear his hat but, frequently wears jackets, jeans and t-shirts and is a comic lover. 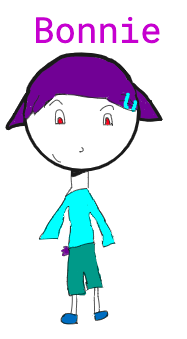 Fuck it, Freddy, Foxy, and Mike are all poly now 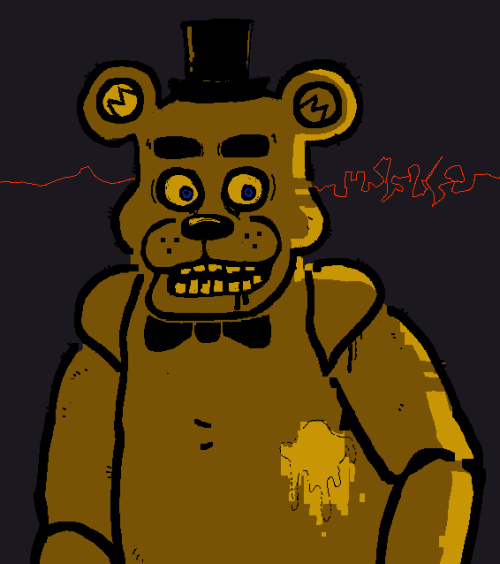 humanized fnaf 1!! might do golden and endo designs later as a bonus,,, : O 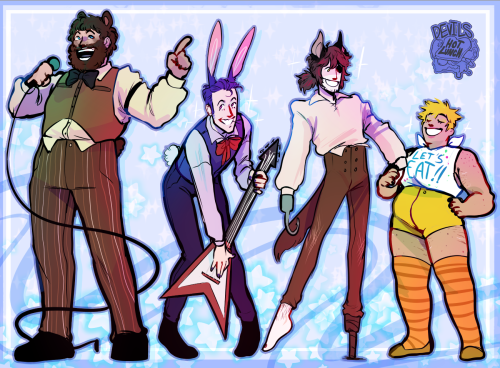 Here’s the fnaf art I made in middle school.

Wtf was I even doing in the first pic, was I like trying to figure out some specific fnaf lore or some shit? Lmaooo

Foxy tries to keep a beat (and he does!) but pots and pans aren’t the best thing to do that with..

Yes I’ve been WAITING for someone to request some fnaf, Freddy has been my favourite since 2015 I’m glad you requested this❤️❤️

Sorry this took so long I’ve been having some family issues but now I can sit down and focus, hope you enjoy

- protective, sometimes a little TOO much but he’s very apologetic if he over steps any boundaries

- very cuddly, any chance he gets he’ll be touching onto his s/o, either by holding their hand, playing with their hair etc, he especially loves picking them up and carrying them around

- loves singing to his partner, will literally learn any song they request

- naps a lot, he doesn’t expect you to nap with him but is so happy when you do

- does a lot of little things to let you know he cares, he has trouble verbally expressing his affection so instead he does it through acts of service or quality time

- very flirty, he thinks it’s cute when you get all flustered and stumble over your words

Wanted to draw how I made the FNAF characters now. I was gonna add Golden Freddy to this, but I didn’t want to make the characters this small so heres just the 4 of them. Freddy, Bonnie, Chica, and Foxy.

Maybe it was the imagination of a kid, maybe it was not but the moment you stepped into the corridor, everything seemed darker and therefore creepier than usual. The darkness stretched the corridor endlessly. Coming from a room so bright it was hard to adjust to the darkness. The only things that let light inside the floor are the small windows on the double door. The light from the dinning room is shining brightly through the windows, illuminating you and a small bit of floor. You looked back at the door you walked through. You heard the clicking of shoes on the ground from waiter walking from table to table. Laughing from kids and screeching of Joy when they see the Animatronics. The chatting from the Adults who gossip about other. There is still time to turn around and leave them alone with Bonnie. Who knows? Maybe there won’t be anything at night any more when they destroy him? But there are more toys like  him. Maybe….just maybe, Bonnie will show up like he does at night and will make them…
You shook your head, trying to get rid of the thought you don’t even want to think to the end. Yes, they make you suffer everyday for years. Yes, nobody is doing anything against it..yes, your brother joins them and your parents doesn’t care…but- laughter interrupted your thoughts. It got fainter by the second. Sighing to yourself you walked forwards. Your eyes begun to adjust to the darkness letting you see the silhouettes vaguely. Looking around you see, that there is no functional lamp here. Weird. Everything seemed like it should function, so why doesn’t it?
Shrugging with your shoulders you searched for the guys. The giggling was leading you to the end of the corridor. Which corridor is this even? It sure as hell isn’t the way to the restrooms. You had no time to look around because you were already at your destination.
“Look, the Crybaby really did follow us!”
“For real?”
“Is this stupid toy this important to you?” you winced inwardly. Sure, keep insulting him. It’s not like he is a big, scary, mechanic bunny.
“Just…give him back!” you held your hand out to receive the bunny but the guys just laughed at your demand. Not taking you seriously. One of the guys took Bonnie and threw him to one of the guys, as if they were playing football. Bonnie flew from right to left, left to right.
“Look! I’m Bonny the dumb big bunny!” One of the boys held Bonnie up to his face, imitating his voice badly and trying to move like one of the Animatronics.
“Stop it….” you grind your teeth, getting annoyed at them. Is there one day you will have your calm and not being fun made of? Why even you? You never did anything to them!
“Nawww, is the Crybaby upset?”
“Heyhey, my name is Bonnie and (Y/N) is my bestest friend in the whoole wiiide world.”
“Oh wooow, Crybaby, you have a friend!” their laughter rang in your ears. Making your blood boil. The blood rushing through your ears. You hated them, loathing them. Seriously, why where you even here? If what you think is real and Bonnie really is a monster, than he can have them for all you care!
“bestest isn’t even a word you dumbfuck…” the laughter died down after your comment. The boy who you insulted looked at you. Honestly surprised before his face morphed into a grimace. Clearly angered by your statement. His grip around Bonnie tighten and he looked straight at you.
“What did you say, you dumb cow?”
“I said that your dumb for saying a word that doesn’t exist!” your anger got the better out of you. Instead of fleeing you fought. It wasn’t the best idea, honestly but it felt so good to say what you always held back.
“You must feel awesome to mock a girl who is alone while you have others backing you up!”
“At least my parents wanted me!” that stung and they knew it. He grinned at your grimace. Knowing full well he hit a particular spot. But this time, something else took your attention away. You hear how he is still insulting you, probably, and the others are laughing but our eyes are glued to the toy. The toy who’s eyes seem to glow again. This time, you are sure that they glow and the look directly at the boy, while Bonnies face is looking at you. His eyes are not. You didn’t imagined it when your sister gifted him to you. Then you also really heard a laugh. Your breath begun to hitch. The thought that you had all the time, now confirmed. Your toy is real.
The boy saw that you ignored him and he did not liked it. He is insulting you to make you cry, so why don’t you pay attention to him?! Following to where your eyes went, the boy is looking at Bonnie. Did his eyes always glowed like this and looked at him? Should the toy do that? It does freaked him out a bit but the anger about you ignoring him is winning and he is clenching the toy tighter before he throws him against the wall.
“Stupid toy!” he walked over to the plush laying on the floor. “You like this dumb thing so much?! Then watch!” He lifted his foot, grinning at you and then stomped down.
You winced. What will happen now?! Is Bonny crushed now? Instead of hearing something like a squeak or something, you just hear the dull sound of a foot stomping on the ground.
“huh?” Everyone looked surprised to where the foot is. To where Bonnie should lay. On the Ground under the foot. But he wasn’t.

Anyone else hyped for Five Nights at Freddy’s: Security Breach? No? Just me? okay

Here I have some posters about Lilygear Lake and Choppy’s Woods! really proud of these, hope you’ll like them! 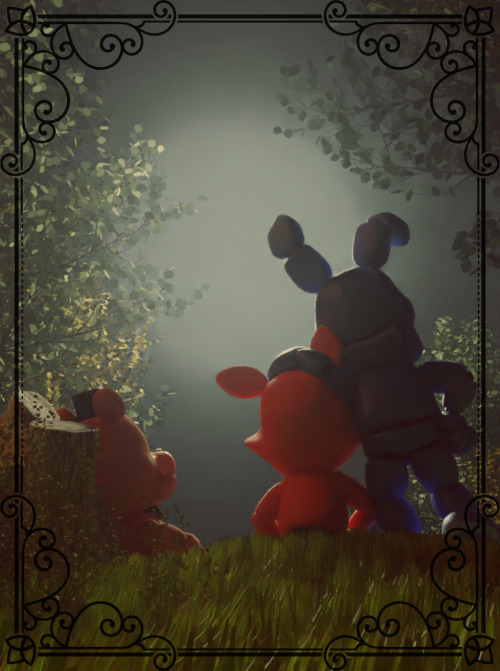 Drew this Glamrock Freddy who’s suspicious of Vanny over here? Might make comics with these chibi designs! If anyone is interested let me know. Or even merch.