thinking about … Him. (my terrible NPC dragon patriarch whose name translates to “Perfection Gold-Lover” and whose human form canonically looks like Lin-Manuel Miranda)

How has your character changed in response to their party members? Are these changes significant or small?

Before getting with the party she was on a not great path for herself due to losing her crew, and had pretty much single mindedly decided she wanted vengeance, no matter what that meant for her. So being with the party sort of gave her another crew, and gave her another sense of purpose and helped her gain back some of what she had lost. It helped her find herself again, in a way. So that’s probably the most significant change. Other than that, some of the smaller things is her being the “older sibling” in some situations. When she comforts other people in the party at times, some of that is just what Rae would do for her, and she may be unsure of how to react and then remember how he would help her. Other things, her view on the gods has shifted more from overall negative/neutral feelings to slightly more positive since some of them have helped out the party a few times.

13. Take the Meyers-Brigg personality test for your character, if you dare. If you daren’t, take your vest guess at what their type is.

Okay I took it for her and got ESFP- A which is Assertive Entertainer lol which seems to fit her okay (although pretty funny since that seems more of a bard thing) and got the Explorer tag, which fits pretty well!

Ahhhh thank u for the ask!!

2. When you were creating this character, what was their original draft? Are they the same character you intended to make?

Heehee, well it is known notoriously amongst my party that my idea at the beginning for Amaranth was leaning more towards the more brooding, unfriendly loner rogue stereotype. As the game went on for a while, it become more obvious that she wasn’t that (although the character development did line up pretty well with what was going on for her before the game started). She developed into a character who fiercely loyal and protective of friends, is pretty extroverted and hedonist and likes to joke around. I will admit a lot of the comic relief part is me just liking to make my friends laugh during the D&D session, but also Amaranth is just like that. Some of the characteristics I had in mind at the beginning are still there such as that she has a lot of anger issues and is an alcoholic.

5. What was the first time you really connected to this character, if ever? Why do you think this moment made the character special to you?

Hmmm…. I think it might be during the first arc when Amaranth goes to help Ditto out of her Fear Pit, and afterwards when they have their downtime in the feywild. It helped sort of establish her having a concrete relationship within the party, and helped me round out the initial character concept to a salty ex-pirate who really has a heart of gold, and is very Ride or Die with these people.

Ohhhh man, there is a lot i can say about character relationships, and they are all interesting! I will try and keep it brief lol

Ditto- I feel Ditto is the first connection that Amaranth made, and it might be to the fact that both of their personalities mesh pretty well. They are both Chaotics, so if left alone, things may explode (they even did an impromptu heist together). Even beyond that, they have both lived off the streets in various cities, and have had to steal and do crime to get by in their own way, which is a reason that Ditto was the first person that Amaranth had opened up to in a while. Amaranth a lot of times will grab Ditto if there are shenanigans to be had. The two of them joke around a lot, but also 100% have each others backs.

Kriv- Amaranth and Kriv have a Rogue and Paladin dynamic, but not in the standard way which makes it a lot of fun. They will also sometimes get into shenanigans, Kriv has helped Amaranth steal booze from a kitchen once, and also they got into a wrestling match in a tavern. I would say Amaranth and Kriv tend to enjoy partying it up. There are a lot of Sibling energies in their relationship. Amaranth’s protectiveness for Kriv is that of a sibling variety, and she has no qualms about teasing him. Beyond that, Amaranth and Kriv are the two Melee fighters in a party, there is a weird comradery that comes with that (speaking from my own perspective). They do have times where things might clash between them, sometimes stemming from Amaranth’s recklessness.

Erwyn- What I love about the development of these two’s relationship is there are some great parallels. Erwyn reminds Amaranth in some ways of her own brother. She feels a certain big sisterly protection about him because of that. Amaranth doesn’t know it, but Erwyn had a sister as well, so I can’t exactly say his feels on the matter, but there are apparently similarities. Amaranth is confidant of Erwyn’s abilities, even though he is more withdrawn about them, and is definitely *points* “look what my elf can do!!” While protective of everyone in the party, she tends to be more hyper vigilant about Erwyn, partly because the last few times he died she wasn’t even there to like. attempt to stop it from happening. She tends to be more gentle around Erwyn for certain things, but will still drag him to a loud tavern to party with everyone (but will still buy him hot chocolate when they are there).

Voski- While Voski is still an enigma to all, she and Amaranth have their moments. Amaranth definitely trusts Voski to have her back, and will usually default to her in most social situations since Amaranth doesn’t really have that delicate sensibility. Besides that, Amaranth bonds with Voski in her own way, a lot of times enjoying the music that Voski plays. She also trusts Voski’s discretion about certain things, Voski being the first one to know about her being a pirate, and other information, and has gone to Voski when she didn’t feel safe sleeping alone in her room, wanting the tiny hut for protection. I think Amaranth is less inclined than than others to bristle at the dragonborn’s bristliness.

Yes I’m a phd. Yes I enjoy eating my neighbor’s compost. We exist.

Last week during D&D we found ourselves traveling through an area with an infestation of prophetic worms (think little tiny inchworms, but they chew portents and omens into crop leaves) and towards the end of the session, met an NPC feeding them magical plants to hone the worms’ abilities, who gave us some leaves with messages (that we have not read yet) chewed in them that they thought were “for us” and let me tell you. We are playing again tonight, and I am excited beyond belief to receive my Worm Prophecy

With everyone talking about stonks now I feel like I need to share one of the funnier things that’s happened in our D&D campaign lately, which is that our bard is currently engaging in benevolent insider trading by investing in the struggling agricultural industry of the city we saved from abyssal forces – right before the party set off on a quest to retrieve a magical artifact that should get rid of the abyssal blight still ravaging said agricultural industry, thus allowing it to spring back and offer her a significant return on her investment

Ditto, tossing coins into the forest to ward off Urdlen: Street smarts!!

Last night, our D&D group wrapped up the longest story arc of our campaign so far (my notes say we started it in 5/26/19), which was pretty incredible. Over the course of our time in the city of Veritas, our characters really established more of a place in the world, making some significant allies (and enemies!), becoming the heroes of a city, having NPCs from many of our backstories crop up, and even discovering some secrets about the broader world.

Our amazing DM @scribefindegil​ juggled factions upon factions, played a whole city’s worth of NPCs, brought to life parts of many of our backstories, wrote an incredible arc surrounding a lost goddess, secrets from ancient history, a Blood War feud in the city streets, and why you shouldn’t trust fantasy pyramid schemes – and created so much more for us all along the way, including prop replicas of gifts given to some of our characters, a ballad she wrote about our heroics saving the city, and an in-universe woodcut of the party, displayed in the local proclamations after we saved the day.

I am grateful every week to get to play with such a wonderful group, with a DM who puts so much love into her world and fellow players who do the same with their characters. So here’s my love letter to the last year and a half: the final form of the conspiracy board I’ve been working on the entire time, thanks to the intrigue elements present from the start. I’m probably going to transform it in to a more general campaign version soon, as we get started on other adventures, in other parts of the continent of Ashona. But for now, here it is, with the final piece added – our DM’s fantastic woodcut:

Thanks, Veritas. It’s been a good one.

(Even if I died there. Twice) 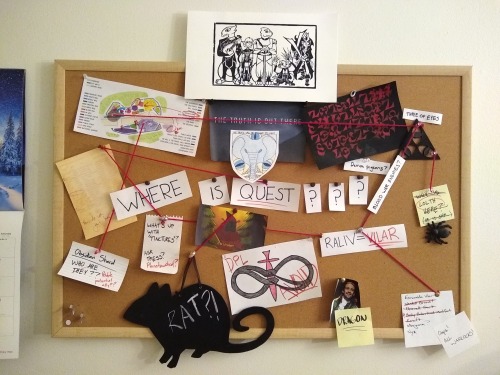 #i love d&d so much you guys#we're going to go visit our wizard's family next!!#and get these demons out of my brain!#and who knows what else!!#friendship campaign
33 notes
spacecapart
Photo

I had a lot of fun working on this commission for @astriiformes (which was a gift for @scribefindegil) of three NPCs from their DnD campaign! Left to right, this is Palava Natsendil, Alembic Doomfist and Hubris Steelfingers, who all have marvellous names and posed various interesting challenges when it came to drawing them. I’m especially proud of how Hubris turned out, because I’ve never drawn a tabaxi before. (Fun fact: I based her fur patterns loosely on my mum’s cat Luna.)

If you’re interested in getting a commission of characters from your own campaign (or from any other media for that matter), then check out the sidebar links on my blog for a post with prices and other info! 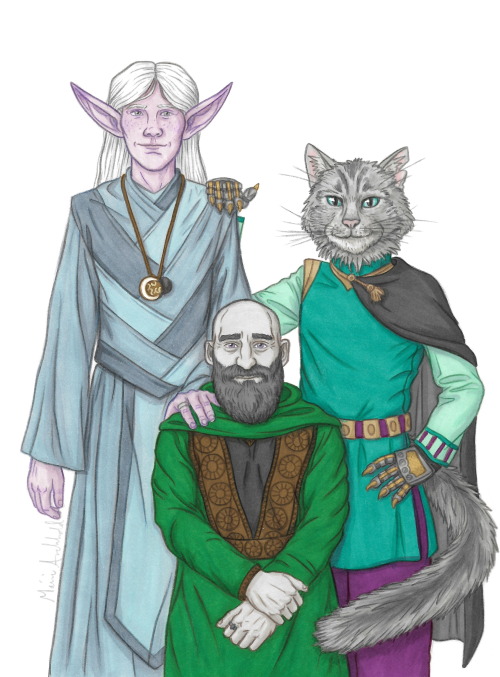 man, i really gotta devote some thought to what this city my party’s in is like when it *isn’t* infested with demons

ALSO OUR PALADIN WAS SO COOL AND DESTROYED THE DEMON CHAMPION AND THEN CHANNELED ENORMOUS AMOUNTS OF HOLY POWER TO SAVE THE CITY AND NOW HE’S A FOLK HERO AND I LOVE HIM!!!!

Our party had to defend themselves to a bunch of judgy celestials, and it quickly turned into everyone defending their friends by talking about what good people they were. Ditto got very emotional. 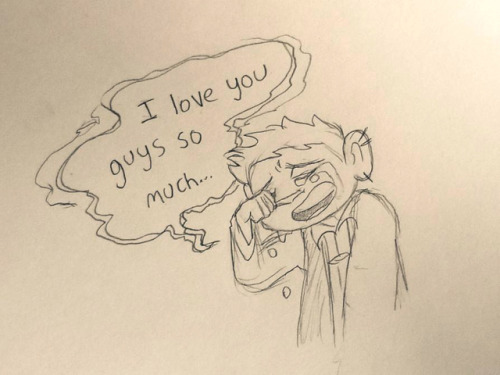 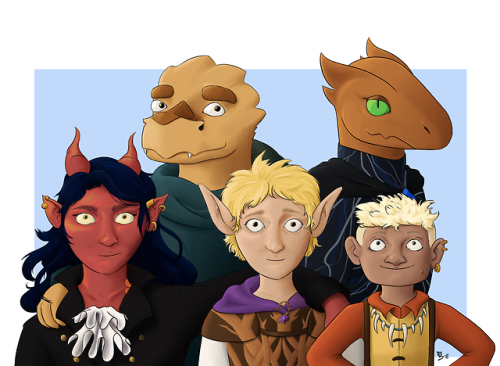 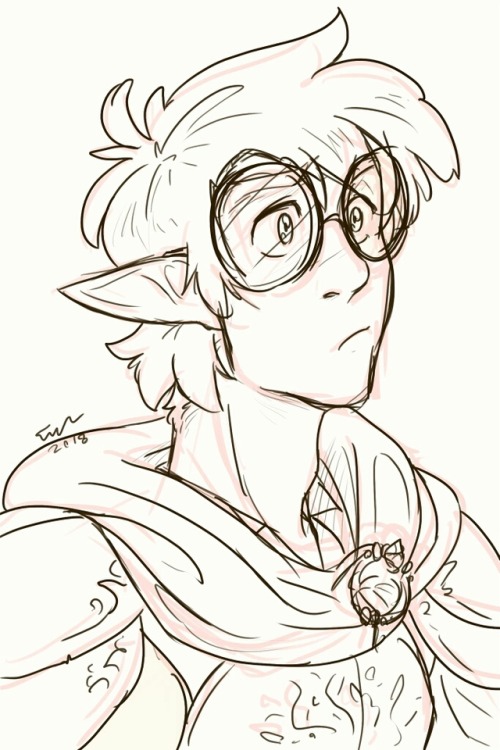 Yasha describing Molly as a burst of color after being in a monochromatic world for so long. 😭