Page 4: 2020′s biggest winners – what everyone was watching, posting and streaming this year

Page 5: Drew Scott recently revealed that as a struggling young actor he was the body double for Tom Welling when he played Superman on Smallville from 2001 to 2011 and when they were using butt shots and ab shots Drew was the one they were using

* Loser of the Week – E! After announcing plans to leave their longtime network the Kardashians sign a multi-year deal with Hulu

Page 8: Up Close – Kelly Clarkson duets with her contestant Desz on The Voice finale; Gwen Stefani

Page 10: Elves on Selves – Jennifer Lopez brings Lenny Kravitz in on the latest goofy Instagram trend, Kerry Washington joining in on the fun with Katy Perry, Mariah Carey with Jim Carrey’s Grinch, perched on Jack Black’s shoulder is a shot of Jack Nicholson who has Jack White on his shoulder

Page 14: Scott Disick and Kourtney Kardashian with their kids Reign and Penelope, Gordon Ramsay heads for the sauna while filming a TV holiday special in Lapland in Finland, Hailey Baldwin drinking a cup of coffee with a face mask on

Page 20: Dakota Johnson was seen sporting a massive emerald stone while out shopping in L.A. recently sparking speculation that she is engaged to Chris Martin – Chris quietly proposed and they’re so excited about finally making it official

Page 21: Princess Eugenie and her husband Jack Brooksbank moved into Prince Harry and Meghan Markle’s U.K. home Frogmore Cottage but less than two months later they’ve moved out because it felt eerie being in the house after what went down with Meghan and Harry and the royal family; something didn’t feel right about living there and Eugenie and Jack are expecting their first child so the last thing they wanted was a dark cloud over them

Page 22: Cover Story – John Travolta is learning to live again as he faces his first Christmas without wife Kelly Preston – John can’t wallow in grief because he’d let down his kids and Kelly

Page 26: Tom Cruise staged his meltdown – it was the on-set rant heard ‘round the world but no one saw this twist coming – what isn’t clear is how the audio of the rant came to be and it was actually staged then leaked to make Tom look good – phones are confiscated on set so only the sound guy could capture that and he certainly wouldn’t release it – Tom’s image has taken a hit over the years but in the recording he seems more real than ever so it could have been one big PR move

Page 36: The Big Interview – Heather Rae Young – the reality star and bride-to-be says fiance Tarek El Moussa is more than happy to pitch in as they gear up for their 2021 nuptials

Page 45: Double Take – Jerry O’Connell enjoys a mimosa at his home in L.A.

Pregnant Princess Eugenie and her husband Jack Brooksbank have ‘moved back in with Prince Andrew and Sarah Ferguson’ after staying just six weeks at Frogmore Cottage, royal biographer claims

Pregnant Princess Eugenie and her husband Jack Brooksbank have ‘moved back in with Prince Andrew and Sarah Ferguson’ after staying just six weeks at Frogmore Cottage, royal biographer claims

Princess Eugenie has ‘moved in with her parents at the Royal Lodge in Windsor’
Royal biographer Omid Scobie claims royal moved in at Christmas and hasn’t left
Eugenie, 30, is expecting her first child with husband Jack Brooksbank, 34

“The Duke and Duchess of Sussex should not have had to pay for the renovations to Frogmore Cottage. All Royal Properties should be maintained through the Sovereign Grant!” - Submitted by Anonymous 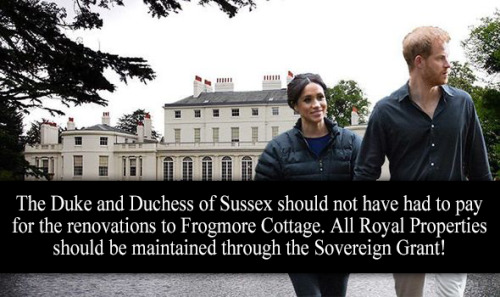 “I love how people are still confused about Frogmore situation. That’s exactly how it should be, because how Frogmore is used and by whom is a private matter that we’ll only know if the parties involved in the upkeep of the property want to tell us.” - Submitted by Anonymous 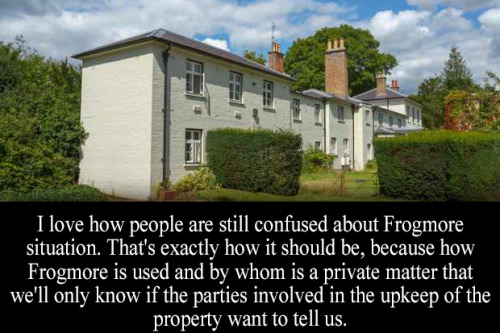 Frogmore Cottage has been the subject of a lot of speculation recently, find out more about the UK home of the Duke and Duchess of Sussex.

Where is it located?

Frogmore Cottage is located on the Frogmore Estate in Home Park, Windsor, England. The Grade II listed property is part of the Crown Estate, meaning it is on the Monarch’s public estate.

Page 2: Up Front & Personal – Robert Downey Jr. goofing off in Malibu, Jay-Z works out in Hawaii, Corinne Olympios in a bikini

Page 5: Donny Osmond is heading back to Las Vegas without sister Marie Osmond and without regrets after his sister was pushed out at The Talk – Donny is bringing his first-ever solo show to Harrah’s and the singer couldn’t be thrilled

Page 6: Naya Rivera’s ex-husband Ryan Dorsey has filed a wrongful death suit on behalf of their son after the actress’ fatal drowning in a California lake – he’s suing for negligent infliction of emotional distress and the complaint claims Naya’s death was preventable and the boat that she rented to cruise around Lake Piru with her son Josey didn’t meet Coast Guard safety standards and there was not a single sign anywhere warning of the lake’s dangerous currents

Page 7: Angelina Jolie’s custody war against ex Brad Pitt could end up killing him because he is so strung out he’s puffing up to three packs of cigarettes a day – Brad is desperate to quit the habit but the anxiety of his legal woes with his ex-wife is making it impossible – he tried using vapes for most of last year which worked for a while but the drama and misery had him reaching for the old school smokes and now he’s chain-smoking all the time and as a result he stinks to high heaven and it’s affected his appetite to a point he just picks at meals and often skips them entirely

Page 8: Prince Harry and wife Meghan Markle blindsided Queen Elizabeth by sneaking out of their British home Frogmore Cottage in the dead of night and handing over the property to Princess Eugenie in a hush-hush deal – with no public warning or royal fanfare a late-night parade of moving vans showed up at Frogmore on November 20 and cleared out anything left behind by Harry and Meghan when they bolted for North America last spring – it’s a sure sign they’re never coming back to live in Britain and the ultimate slap in the face for the queen who gave Harry and Meghan the cottage as a gift

Page 9: Prince William and Duchess Kate Middleton’s are lurching from the loss of their beloved dog Lupo

Page 10: Priscilla Presley is being chased out of her $15.9 million Beverly Hills home by the ghost of her tragic grandson Benjamin Keough – when Ben’s specter first appeared Priscilla was spooked but she calmed down when Ben assured her he’s okay and he’s with Elvis – a month after Ben killed himself Patricia put her longtime residence on the market and made the move to Graceland and she believes Elvis still haunts Graceland and since Ben is buried there too her grandson’s restless spirit will finally be happy there

Page 11: Fearing for his life the nephew of North Korean tyrant Kim Jong-un is being hidden by the CIA after his dad was horrifically killed by the murderous dictator’s assassins – Kim Han-sol fled and was put into protective custody by the CIA after his dad Kim Jong-nam was executed on orders of his half-brother who saw him as a rival – Jong-nam died when two North Korean killers smeared deadly VX nerve toxin on his face at a Malaysian airport in 2017 – now Han-sol is reportedly living in luxury under CIA protection thanks to his family’s dough

Page 12: Celebrity Buzz – Chris Noth shooting The Equalizer in NYC (picture), RHOBH blabbermouth Lisa Rinna’s model daughter Amelia Hamlin seems like a chip off the old block at least when it comes to getting stuff off her chest like she had breast reduction surgery at 16 after a secret nipple piercing became dangerously infected, suddenly celibate Meghan Trainor who’s definitely not all about husband Daryl Sabara bumping into her pregnant belly bump admitting she can’t have sex while their son is between them, Reese Witherspoon’s ex-husband Ryan Phillippe gave their son Deacon an unforgettable out-of-this-world surprise which was a trippy Joshua Tree stargazing search for alien encounters

Page 13: Kit Harington gets a touch-up on the set of Modern Love in Ireland (picture), Judi Dench (picture), Hilary Duff on the set of Younger in NYC (picture), Gilles Marini is opening up about a quickie first-time in an orphanage at age 13 seduced by a more experienced 17-year-old girl

Page 14: Cybill Shephard is returning to the small screen in the new comedy I Love This for You playing the icy boss of a home-shopping network starring alongside Vanessa Bayer and Molly Shannon, Name That Tune is getting a family-friendly reboot hosted by Jane Krakowski with Randy Jackson as band leader

Page 16: Dr. Mehmet Oz is trapped in a bitter family feud with his own sister who is suing him for refusing to cough up the $15,000-a-month rent he’s collecting from two luxury Manhattan condos purchased by their late father – Nazlim Oz who lives in Turkey charges her TV star brother owes her cash and bank statements related to swank properties he manages which are estimated to be worth a combined $10 million

Page 17: Alicia Silverstone loved her son Bear’s waist-long hair so much she cried inside when he suddenly decided to chop it off – it was an emotional moment for Alicia because it meant her baby was growing up

Page 19: Halle Berry dished she had her first orgasm at age 11 and she did it to herself

Page 30: Tight and toned Jennifer Lopez is blasting blubbery beau Alex Rodriguez’s dad bod and the retired baseball slugger couldn’t care less – J.Lo told A-Rod many months ago he was starting to sag and get lumpy but he kept dipping into the bread basket and now he’s out of control feasting on pies and chips and sweet treats and he rarely works out even though they have a fully equipped gym in every home they own – Jen’s wondering if this is a downhill slide that’s never going to get fixed and she has a lot of guys drooling over her and a lot of options as she often reminds Alex

* Parkinson’s-plagued Michael J. Fox is done with acting – he says increasing symptoms of the disease which he’s been battling for three decades have left him no choice

Page 40: Steve Martin is living up to his wild and crazy guy image with out-of-control online shopping sprees and he’s ordering so many goodies he’s running out of rooms to put them in and that’s making his wife Anne Stringfield go crazy too – Steve is spending a fortune on things he doesn’t really need and that’s just not like him; he used to be such a modest spender until he discovered all these wonderful sites where you just click and it’s yours and he gets so excited when new packages arrive it’s like Christmas every day for him

Page 45: Doomed comic John Belushi was a sloppy mess who who snorted cocaine like a pig and went on an out-of-control six-month drug binge in the Big Apple shortly before dying from a kill-shot of coke and heroin in L.A. 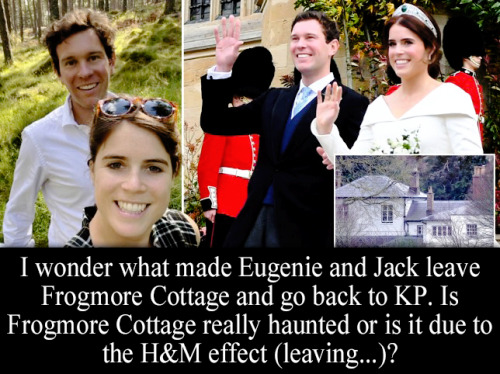 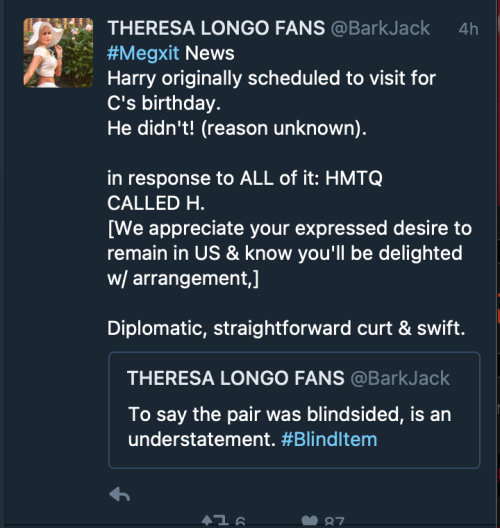 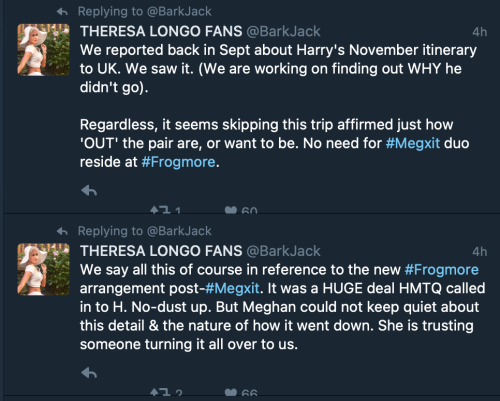 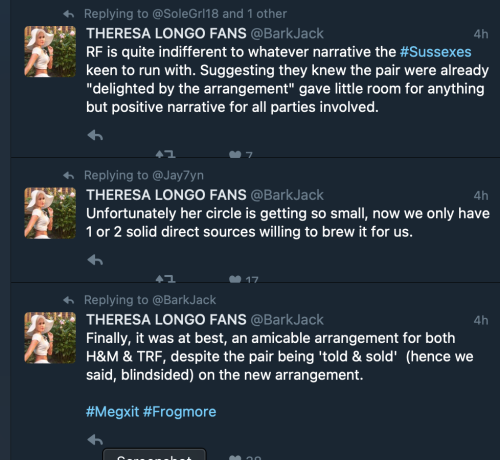 the brf needs to put out a proper statement for the eugenie and jack have now moved into Frogmore story because there’s just so many unanswered questions. once again the brf’s incompetancy is shown lmao

Getty Images
Prince Harry and Meghan Markle have made non-stop headlines since stepping down from the royal family last year.
The Sussex couple lost their HRH titles and their Sussex Royal brand and relocated to California to prioritise their family of three and mental health over their former roles.
It is their UK property, Frogmore Cottage, however that has made the most news.
It was reported…