In Wicked Games, the silk suspension scene is probably my favorite. I’m also really partial to the rescue scene in The Scars We Carry.

In my older fics, I remember being really proud of the “final battle” scene in Spellbound and some of the quieter scenes in Spellbreaker (both FrostIron stories). And the entirety of Covered in Blood and Dust (we watched the world burn) — I really, really love how that scene/part of the Aftermath series turned out, and I’m sad I’m probably never going to finish it. There’s a lot of good moments in that series, honestly. I just had no idea where I was going with it.

Thank you for the ask! 💖

Title: Of Miracles and Pouring Wine
Author: courgette96
Rating: Mature
Length: 5–10k words
Genre: Slow Burn, Drama
Summary: This God is change and chaos. Destruction and rebirth. Tony reads the words and finds them beautiful. And so he finds his religion.

Alright, where my frostiron mutuals and followers?

💙 likes are fine, I just need a little headcount 😘

#frostiron, #i need to find my people, #specifically if you're already following, #but newcomers welcome, #I'm mostly a hiddles centric blog, #then loki and tony and rdj and marvel and tons of other stuff
36 notes · See All
morgans-starksText

here is chapter 1 of “that one last tender place” aka the fic i spent the last month working on, to the detriment of all my other responsibilities. it’s got everything: a soul bond, pining, pining while soul bonded, increasingly dire pop culture nicknames, a thrilling twist on the ‘there was only one bed’ trope, and a whole host of mental health issues. enjoy!

These are my two favorites, and then the one i am anfling to get next in the game Legend Of The Phoenix.

my live journal icon was Spike, i started writing fanfic with FrostIron…i ship Moriarty with…almost everybody….

nsfwish frostiron under the cut (nothing scandalous, just me being cautious) ;)

#frostiron, #ironfrost, #loki, #tony stark, #my doodles, #mcu, #blushing Loki!!!!!, #prob Tony is just gushing about how beautiful perfect amazing he his, #and Loki can't take so many compliments at once
60 notes · See All
teadrinkingwolfgirlText

Hemispheres, Part 2, Chapter 5.  This image would make my readers laugh, I think.

Warriors Three and Lady Sif: *appears from the Bi-Frost*

Thor: Friends! To what do I owe your visit?

Fandral: We came to see you, friend!

Volstagg: And the All-Mother wanted to check on how Loki is in his redemption.

Loki: *not happy to see Sif and the Warriors Three* Oh, I was doing SO well without any of you.

Tony: Aren’t those Thor’s friends from Asgard? You know, the ones who mock you for using magic in battle?

Tony: Should have said something! *ready to put on his suit*

Mikey: *pops out from kitchen* Hey, Lokes! Why the long face?

Loki: *points to Sif and the Warriors Three*

Mikey: OKAY, Imma get Jack and Ezra! *runs off*

Nat: *to Sif and the Warriors Three* Why would you dislike someone for using magic in battle?

Sif: A dishonorable move in Asgard. Besides, he uses Seidr, magic of the women.

Nat: That’s coming from you, a woman using the art of men to battle with no magic whatsoever?

Sif: *turns to Thor* I dislike your friends, Thor.

Bruce: *rolls eyes* You know, on Earth, those who fight are considered as normal people because anyone and everyone can fight, but those with magic are either considered as witches or just extraordinary beings because magic is rare on Earth.

Hogun: And the point is…?

Ezra: *enters with Jack* The POINT is that Loki’s magic is freaking AMAZING, and you retards don’t get the right to judge it!

Jack: Or are you four just cowards because you don’t understand the power and amazement that Loki’s magic has?

Thor: *crosses arms* Watch your tone on my friends.

Steve: I rather not let anyone mock anyone, but if you put it that way, it DOES sound fair…

Mikey: *appears behind Peter* Sif and the Warriors Three over here say that Loki’s magic is bad.

Fandral: Not really ‘bad’, per se…

Peter: *gasps in horror* WHAT?! But Mother’s magic is AMAZING!

Jack: He’s always been, but coming from Peter? Okay… I did NOT expect that…

Tony: *tears up and runs off* PEPPER, GET THE LEGAL PAPERS! I’M GETTING MARRIED!

Thor: *fumes and runs after Tony* NO, STARK! YOU ARE NOT WORTHY!

Sif: I’m not even going to question…

Fandral: *stares at Jack, Ezra and Mikey* Uh, who are you, exactly?

Mikey: I’m Mikey! And this is Jack, and this is Ezra! We’re Loki’s friends!

Volstagg: *turns to Loki* You have friends?

Clint: That’s what I asked!

Ezra: *takes out lightsaber* You have five seconds to take back that question.

Jack: *twirls staff and aims it at the Warriors Three* And three seconds to ask a better one.

Sif: Calm yourselves! It is a good question!

Loki: *tears up* Are you saying… I cannot have anyone to love…?

Mikey: *takes out and spins nunchucks* YoU hAvE ONE SeCoNd To ReThInK yOuR aNsWeR!

Nat: *takes out guns* And another second to get out of this tower.

Bruce: Yeah… you guys are mean…

Thor: *bursts in with Mjolnir* WHO DARES HURT MY BABY BROTHER?!

Hogun: *grimaces* It was Sif and Volstagg.

Tony and Thor: *goes after them*

Ezra: Well, *sits down on couch* this was an interesting morning…

Tis the season to be a little shit. 😂Thanks for the prompt!

I’m so sorry it took me so long to answer this. I saw it and then saw something shiny and forgot to answer.

Does anyone know which fic this could be?

Lots of sexy eye contact and groping. Everyone gets off on the floor below because it’s too much.

The cause of a fever… 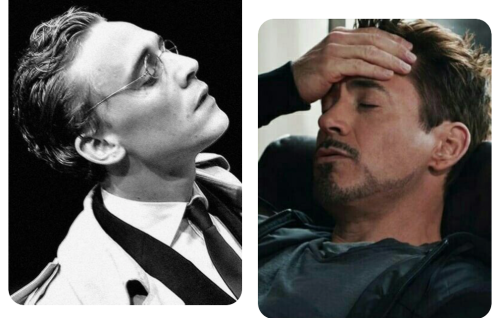 #frostiron, #sometimes my pinterest knows me too well lol, #like who would put these two pictures together, #its trying to tease me, #lol, #tony/loki, #loki/tony
19 notes · See All
bironfamText

The only ship that is more 2012 than frostiron is strangefrost and they hadn’t even interacted until 2017.

Tony *nudges Stephen and Loki awake at 4am* : Do you like me?

Loki : Anthony, we married you.

Tony : Yeah but did you marry me as friends or, as husbands? Unclear.

Stephen : Tony, it’s the fourth time this week, I sWEAR TO VISHANTI-

Stephen : *just groans and hits Tony with a pillow* shut the fuck up and sleep for once

Nat: How did the proposal go?

Jack: Oh! We went on a date by the cliff, and when it was sunset, we stood up to admire it. Once I was distracted, he got onto one knee and made such a romantic speech about wanting to marry me, and it was SO good that I said yes!

Loki: It’s nice, but I like how Garazeb proposed to Ezra better.

Tony: And how DID that go?

Ezra: *chuckles* We were on our ship and were in the middle of a fight when he suddenly asked me to marry him. I was in the adrenaline of the battle and said yes then when we knocked the Imperials off the ship, he gave me the ring.

Peter: *le gasp* YoU kNoW hOw To UsE hAsHtAgS, mR. LoKi?!

Youngest Cinnamon Rolls: *are on a hangout*

Thor: *flies to them* Loki, if I may interrupt—

Tony: *walks towards them* Hey, Lokes—

Random villain: *shows up* I will destroy the Earth

Ezra: Seriously, can’t we have ONE hangout without being interrupted?!

Thor: I disapprove of your relationship with the Man of Iron

Thor: Then why do you still date him?

Jack: *from the other room* AND ALSO BECAUSE HE’S ALREADY ADOPTED PETER AS HIS OWN!

Loki: Yes, that too.

Ezra: *introduces Zeb to Avengers* Everyone, this is my husband, Garazeb Orrelios. Zeb, these are my friends, the Avengers.

Zeb: *snarls and pulls Ezra close to him, causing everyone to jump*

Clint: *move to the back of the room* GET YOUR FREAKING HUSBAND

Tony: *holding onto Loki for dear life* YES, IT DO