The battle against Shadow Gardevoir raged on for hours, but Gallade kept getting back up… 😮

Everyone would be happy to interact

Vinny: Unfortunately I only get this lame old Mega Blocks. Because a certain ‘SOMEONE’ thinks that getting me Mega Blocks are much better than Legos. 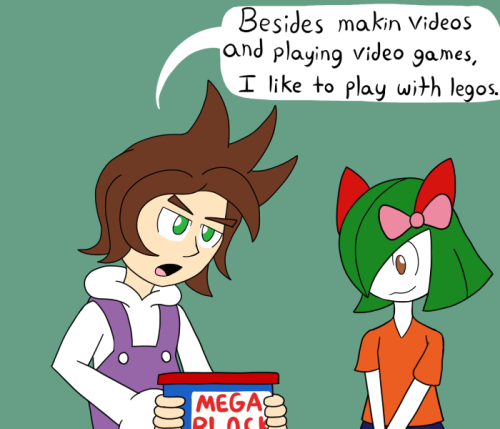 Hey uh, can someone trade me a male ralts…? I mean I’m early in the game so I don’t really got a lot or any good Pokémon to trade back so uh, sorry

Romeo: Then again I should stop asking myself that since strangers like you are gonna end up getting in one way or another. 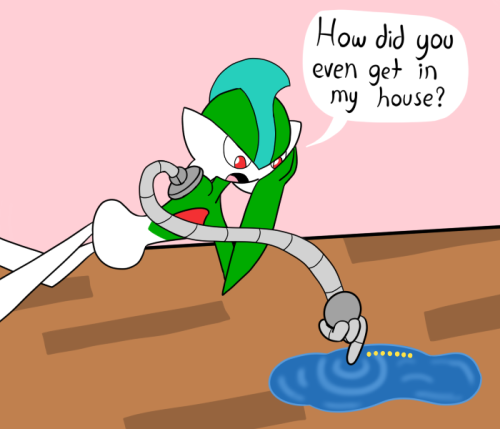 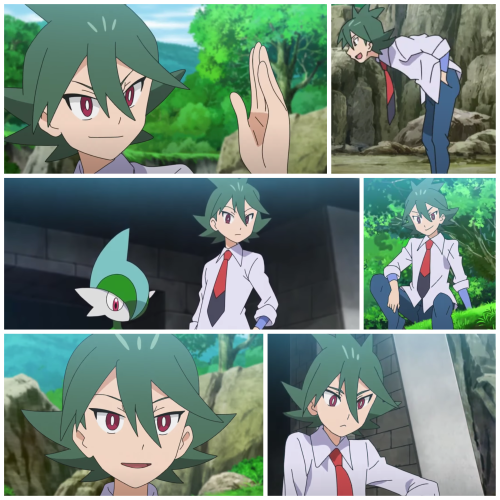 Michele: A Lucario human-hybrid, usually a polite and friendly man, way too brave…

Lissa: Michele’s wife, a very kind and respectful lady, always up to help.

Michela: literally Michele but female. (Shipped with Kats from Luckykatsranch)

Katy: An adopted shinx with alternative colours, cheerful and jolly.

Luna: Lissa’s big sister, a rather calm person, act like a mother sometimes.

John: the big good boy, very strong and tough, but inside is just a chubby cat always happy to get cuddles.

Jay: the silent, usually doesn’t talk much. But he’s a good guy.

Rocky: Far from being a chill guy… He always like to challenge everyone. Other than that he’s a good guy.

Jack: the incarnation of elegance, even while fighting, a real gentleman. And the best archer/sniper.

(shipped with Grace from bubamon)

Series Of Origin: Game Of Thrones

Gallade: Jon is an experts swordsman and is great in combat

Decidueye: Ygritte’s pokemon that she cherished that she gave him in her final moments

Hydreigon: He’s a Targaryen but also his relationship with Daenerys

Slowking: You Know Nothing Jon Snow

Cryogonal: His last name is literally fricken snow, what the heck was I supposed to do.

Gin sat on top of his throne looking rather unimpressed. He tapped his foot against the ground. Leon bowed before him alongside Oliver who glared at him.

“I don’t see him with you.”, Gin pointed out the obvious.

“This psychopath thought it was good idea to hit him with a tsunami.”, Oliver said.

“Ahem…the tsunami was supposed to bring him to Galar, but it seems something intercepted it and changed his destination.”, Leon said, coughing nervously knowing that their master was rather upset.

“From what I was able to detect. It’s likely that he ended in Alola considering the direction he was going in.”, Leon answered, trying to stay composed.

“Then, the Quatre Knights shall go to Alola to retrieve him.”, Gin replied, making Leon lower his head.

“Show no mercy…”, Aichi mumbled as he rolled around in his sleep and a small smirk formed on his face.

The place where he was seemed rather tropical. Palm trees dotted the landscape and there was a beach in the distance. He was under the shade of one of the palm trees. It was rather humid, making Aichi sweat uncomfortably. He felt a searing headache through his skull. He felt something rub up against him. Aichi’s eyes cracked open to see what was rubbing up against him. It was Soul Saver rubbing her head against Aichi worriedly. She had a puppy look in her eyes which brightened when she saw him wake up.

“Soul Saver…”, Aichi whispered, looking down seeing a makeshift blanket made out of leaves over him being held together by something.

He looked over to see Gancelot sitting down, almost like he was on watch duty on the ground and he looked over to Aichi. It was Gancelot’s aura holding the makeshift blanket together.

Aichi accepted the hug sweated dropping. He was still extremely confused as to what was going on. He started to try and get up after being released from Soul Saver‘s hug. He suddenly froze when he realized…

“I-I’m naked!?”, Aichi questioned as he blushed embarrassedly, holding up the makeshift blanket almost like a censor bar over himself.

His clothes were hanging from a makeshift rope made from vines.

“Are they dry yet?”, Aichi asked, stills feeling rather flustered.

Gancelot got up feeling the clothes to see if they were dry yet.

Aichi instantly grabbed his clothes, getting what Gancelot said. His clothes were kinda hot like when you left a cold drink in a car in hot weather. Aichi simply put on his red turtleneck and jeans. He tied his white shirt around his waist because it was way too hot to wear. He rolled up his jeans and the sleeves of his turtleneck to alleviate some more heat.

“B-because! Humans are expected to wear clothes. And it’s illegal to walk around naked.”, Aichi replied.

“A-anyway where’s the others? Where…are we exactly?”, Aichi asked.

“Alola?…Alola!!!”, Aichi replied, blinking, realizing something before freaking out.

“Well…first of all it’s really far from Kakusa. Second…”, Aichi trailed off as he looked around.

“I thought this place had become inhospitable after Team Asteroid…they used it as an example to the other regions when they started their plan to take over the world. They shot a bomb here, some sort of special bomb that released radiation that killed all the humans here, but not the Pokémon.”, Aichi explained.

“That’s a relief. People have been too scared to come back here to check to see if it was gone…it’s really sad. This region used to be a very popular place to vacation. It brought a lot of joy to people.”, Aichi replied.

Gancelot looked down like he wanted to say something.

“Is something wrong?”, Aichi asked.

Aichi froze as he heard the news. His eyes widened and Gancelot became increasingly nervous as felt Aichi’s aura change. Soul Saver flinched feeling the same strong emotions through the link. The restraint braces on Aichi’s arms glowed brightly in response now very visible due to rolled up sleeves. A massive negative aura of anger emitted from him. He shook trying to get a hold of his emotions as a dark blue aura leaked out of him. He hugged himself as if trying to contain something within himself.

Aichi sweated nervously nodding as the dark aura started to recede into himself.

“I-I’ve just got to be calm…I can’t let myself freak out like this. I’ll just cause more trouble if I do that.”, Aichi told himself.

Aichi took deep breaths trying to calm down his own anger and worry.

“It was because I was so weak this happened. I should have had my guard up against 002f! I should have…”, Aichi thought.

“Show no mercy.”, Aichi heard the voice of his father ring throughout his mind.

Aichi grabbed his head and shook his it trying to clear the thought out of his mind. His heart banged loudly against his chest.

Aichi lowered his arm looking between Soul Saver and Gancelot.

“So, this is the team to recover the champion?”, Kyou questioned.

By Misaki’s side was Kamui and Miwa.

“Well, to be fair she did say it was supposed to be a small team.”, Kazumi replied.

“You can count on us to find bro!”, Kamui said as he pointed at himself.

“Well Emi and her little friend wanted to help, but Misaki refused.”, Miwa said, before Misaki stepped on his foot.

Miwa cringed in pain, grabbed his foot and hopped on one leg.

“Aichi wouldn’t want her to get involved and she has only one Pokémon.”, Misaki explained.

“One mythical Pokémon.”, Miwa replied, before Misaki stepped on his foot again.

“You know that flying grass not fairy fairy.”, Gouki said.

“Not fairy fairy. So, like how Charizard looks like a dragon type and should be, but isn’t?”, Mamoru asked.

Kourin fidgeted but said nothing. Suiko and Rekka had knowing looks at Kourin.

“Do you want to help them out, Kourin?”, Suiko asked, before Kourin looked away.

“It’s fine if you come along. If you’re not busy with your idol duties.”, Misaki said.

“I never said anything…”, Kourin mumbled, still looking away.

“That’s because we all know you love him.”, Rekka whispered smugly.

This caused Kourin to blush embarrassingly and Takuto chuckled.

“Why not go along with them Kourin?”, Takuto joined with a knowing smile and Kourin looked mortified.

The others sweat dropped at Kourin’s reaction.

“You are so tsundere, girl.”, Rekka whispered.

“F-fine! If you want me to come so badly sure!”, Kourin replied.

Wingal flinched in pain when he tried to run away from a Beware coming his way. Llew scooped him up running with him under his arm. Llew turned his head back at the Beware shooting water at it. The Beware fell over slipping as it became covered in water.

The area around them had some buildings that looked like they were being slowly eroded away and reclaimed by nature.

Alfred suddenly flew in and they looked to him.

“I found a castle up ahead. It’s hard to see through all the greenery but it’s there and it looks like there’s actually people there.”, Alfred said.

Wingal and Llew perked up at the news.

A camera that looked newer than everything else caught the Pokémon on it’s feed. It seemed to be relaying this back to somebody.

On a screen a shadowed figure sat in a chair. The decor around him looked rather lavish. He held a wine glass in his hand and took a small sip. Another screen showed the feed of a drone flying bits away from Aichi, Gancelot, and Soul Saver.

“To think such an interesting thing just washed up on my doorstep.”, the figure said.

He shook off his little episode, and focused on finding some way to find Ahmes and a way home.

“Alright, can you lead me to the others Gancelot?”, Aichi asked.

Gancelot nodded, gesturing to Aichi and Soul Saver to follow him. Gancelot suddenly stopped as a palm tree just swung at them. They hastily ducked before the ‘tree’ shot out blue dragonic energy. Gancelot punched at the ‘tree’. This caused it to shake and growl?

Romeo: I don’t know what he mean by that but he said something about recording our adventures here when he becomes an actual Pokémon trainer one day. Since his first course of action is to compete the Alolian challenges. 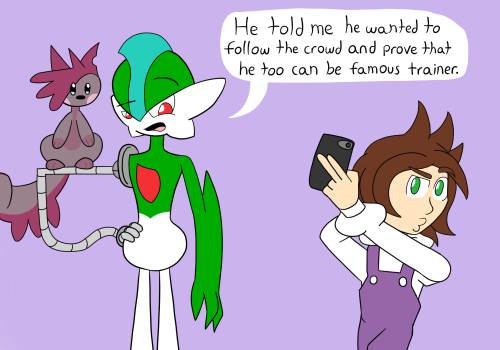 here’s the piece i did for the @captureonzine !! i had a lot of fun making it and i really like how it turned out :))

I have a feeling we might see Rinto again, maybe after Ash has his battle with Wikstrom.