Hi, folks! A big thank you to everyone for giving my first fic Healing Touch so much love! I have decided to expand it into a little series to explore their relationship a little more and to play around with these characters. Please feel free to like and share… this COVID-frustrated actor is in need of validation lol.

Pairing: Geralt x femme!healer!reader (third person because I wanted to give her a name. Feel free to substitute for you own)

Summary: Geralt finds himself recuperating after a tough battle at the cottage of an old friend. Jaskier is confused about their relationship (sorry, there will be more Jaskier in other stories to come, but I wanted to focus on Geralt and Gwennyd this time).

Jaskier had no idea where they were headed, and with Geralt barely conscious, he was relying on the horse’s intuition. A ribbon of sticky crimson slowly trickled down Roach’s left flank as the makeshift tourniquet around Geralt’s upper thigh, now completely soaked through, had begun to fail. The blood-soaked white cloth stood out brightly from his dark trousers like a cardinal in dense forest. The witcher’s left arm, tucked tightly against his side as its owner slumped forward in his saddle, was holding a second wound shut as best it could, a clean shirt bunched against it. Jaskier knew very little of mending wounds, and had followed Geralt’s winded instructions to the best of his abilities and had just managed to get some basic directions from him and get him on the horse before he succumbed to exhaustion.  They were heading directly into what looked like a dense forest, and Jaskier only hoped there would be no danger. He looked tentatively at Roach, who seemed to know where she was going still, and so onward they went. A few ragged breaths from Geralt let his two companions know that the sooner they reached this healer, the better.

Happy pride! I hope you all have a good month!

#the green/grey flag on geralts cheek is demiromantic if yall were wondering, #mine, #geralt, #jaskier, #geraskier, #the witcher, #geralt of rivia, #julian alfred pankratz, #dandelion, #bad-art-tm, #netflix the witcher
7 notes · See All
tygerlylaPhoto

“Your motives do not interest me, only results”. 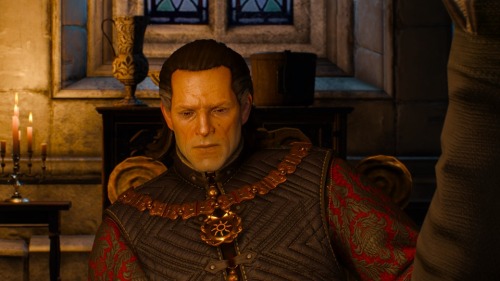 #emperor emhyr, #emhyr, #nilfgaard, #witcher, #witcher 3, #geralt, #geralt of rivia, #Deithwen is so handsome I bend the knee to him
1 notes · See All
evilwitchershitpostChat
Eskel is so dumb I love him
Geralt: Finally took you a while.
Eskel: Saddle kept sliding...
Geralt: Mhm. Not a crappy show dancer out there who doesn't blame her shoes.
Eskel: You're a fucking show dancer-
Geralt: *facepalms*
Vesemir, sitting in the opposite end of the keep: *facepalms*
Lambert, from the other side of the lake: *facepalms*
Forktails around Kaer Morhen: *facepalm* *or I should say facewing*
Me: *facepalm*
Eskel: *Is confused*
Lambert: So, my dear brother, tell me. When you realized you're an idiot?
#EvilWitcherShitpost, #lambert, #geralt, #vesemir, #me irl, #forktails and wyverns, #eskel, #MAH BOI, #MAH PRECIOUS DUMPLING, #he's so dumb i love him, #UwU, #incorrect witcher quotes
9 notes · See All
ghxstsnghxulsAnswer

mmm will this do?

I’ve never seen that movie/show before so I’m not familiar with who that character is, but I’ve seen a post or two pop up on my dashboard on my main before. So, I hope these dumb edits will do!

Hmmm… he seems kinda fitting tho. judging by visuals only, anyway!

and heck yeah! it’s so wonderful to see others are liking Wikstrom, too!! :>

Hello! I know I’m quite late with an update but these last months have been hard on me. This chapter kind of concludes the beginning of the story. I will try to update it as soon as possible. This fic is quite self-indulgent and also I don’t have a beta reader! So, please, feel free to say to me if you encounter any mistakes. And also, I took some poetic liberties with the lore (especially regarding monsters).
Thank you for your patience! All comments are appreciated!

Geralt took his time polishing his swords while looking at his old friend at the pot. With Regis’ back at him, he could notice how the posture was downwards, and the way the vampire’s shoulders were stiff. Being away from Toussaint - or away from his blood brother - was not doing any good to Regis. Even vampires needed time to rest, and Regis was not giving himself this time.

So I finished the Mandalorian and I’ve already got a fanfic idea in my head, I’m gonna actually write it down because I want to finish my Geralt mini series before I start another but yeah.

Geralt of Rivia - The Butcher of Blaviken 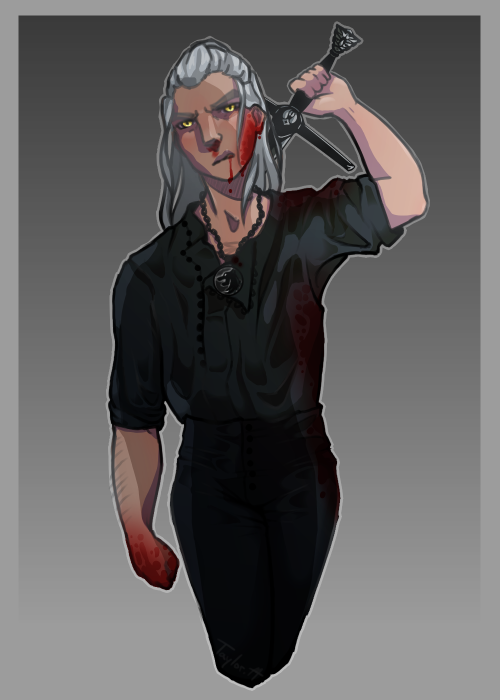 Jaskier got tired of the “hmm”!

Consequences of war - Nilfgaard Won . A mod from Nexus Mods which reflects the decision made during Reason of State and Nilfgaard won. Very immersive, complete with flags and Black ones on the gates. 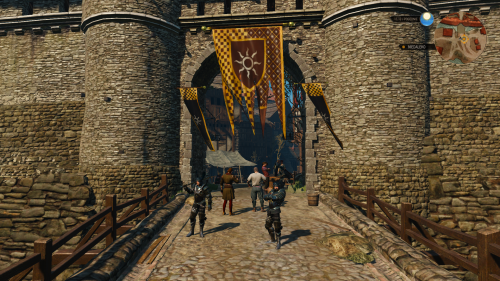 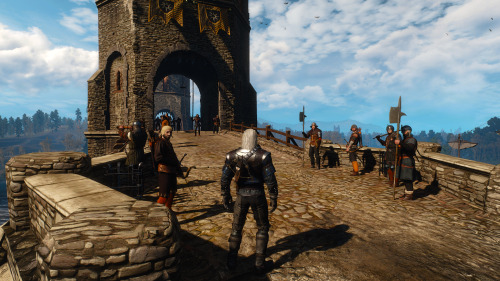 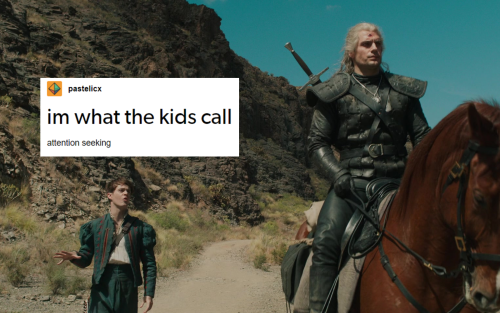 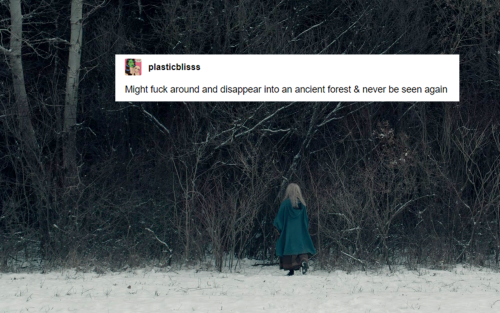 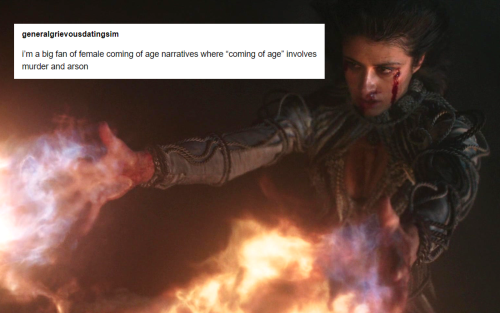 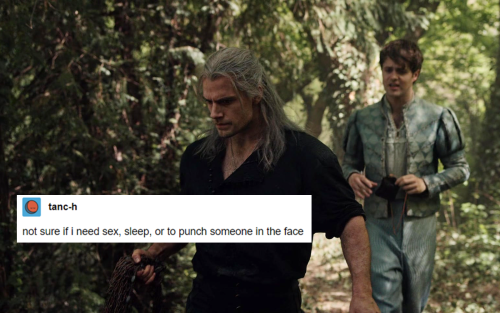 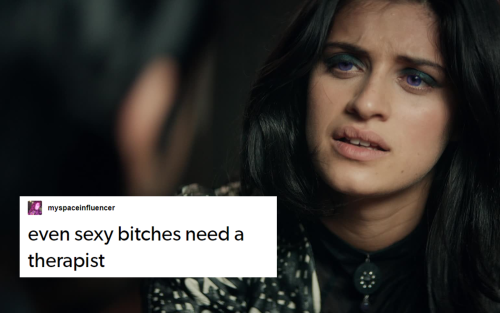 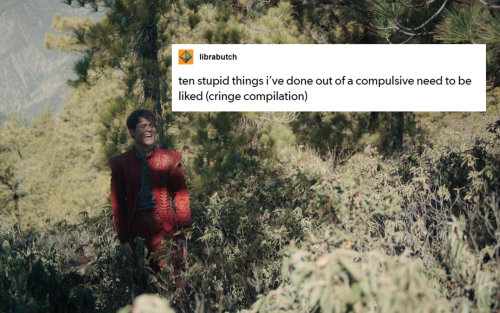 This had to have happened at least once!

this is part of an art trade with an artist on twitter! (my twitter is @jaskierslullaby as well if you guys wanna check it out)

#the witcher, #geralt, #my art
9 notes · See All
itsemmybText

jaskier: do you know why i asked you to come over?

geralt: because i accidentally sent you a dick pic?

Edging a little further upwind, Geralt glanced over at Jaskier walking beside him. The bard was uncharacteristically silent, trudging along under the baking hot sun and looking about as despondent as Geralt had ever seen him.

He was also uncharacteristically filthy, coated almost head to toe in dried swamp muck that was some of the worst Geralt had ever smelled. And he’d smelt some bloody awful swamps in his lifetime. Jaskier had at least managed to scrape the very worst of it off after falling in, and the rest was mostly flaking away off his clothes in little clouds of fine dust while he walked, but the bard still fucking stank.

“You fucking stink, bard,” Geralt said after a moment.

“Oh, yes, thank you, witcher. I hadn’t noticed,” Jaskier retorted; then lapsed back into sullen silence.

Geralt eyed him again as they walked, frowning. Irritating as the constant chatter could get, this gloomy quiet from the bard instead was almost worse. It was… unsettling.

He had originally been planning to push on until nightfall, by which time they would be just reaching the next town along this route, but was starting to think it might just be better to stop early, given the circumstances. He knew this area well, it was about as safe as it got anywhere on the Continent, and there was a good clean river running through the woods a little ways off the road.

Geralt grunted and made up his mind. The heat was getting even to him at this point, Jaskier did look truly miserable, and that stench was enough to make them conspicuous and easy to follow, unlikely though it was that anyone or anything would be tracking them at the moment.

“This way,” he said gruffly, turning off the road and leading Roach into the trees.

Jaskier followed without a word of question or complaint, and that alone was enough to make Geralt decide he’d made the right call.

hello everyone, i made a discord server for the witcher where we can all thirst over the witcher characters if anyone wants to join you can dm me and i’ll send you an invite! everyone is welcome :))

#the witcher, #geralt of rivia, #geralt, #the witcher netflix, #henry cavill, #yennefer, #jeskier, #dandelion, #superman, #the witcher cast
3 notes · See All
witcher-not-quitterChat
Eskel: What the hell are you doing?
Lambert: Building a bomb.
Geralt: IN OUR ROOM??!!
Lambert: It's okay, I'm gonna put it in a box!
#incorrect witcher quotes, #Eskel, #Lambert, #Geralt, #guardians of the galaxy quote turned witcher, #cause lambert and his bombs, #Mel posts what pleases her
26 notes · See All
Next Page