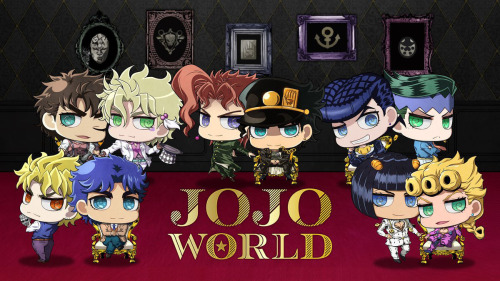 I made a joke in my last post about GioMis about Giorno having abandonment issues, and I’ve kinda been thinking about it ever since. So here goes:

Headcannon: Due to his mother being incredibly neglectful of him, Giorno never really experienced affection or love of any kind until he started dating Mista. Once he did he found that he couldn’t get enough of it, absolutely touch starved he found himself being more clingy than both of them anticipated he would be (Not that Mista minds, mind you). A sudden, new type of anxiety also started creeping up. Giorno, on a surface level knew these feelings were useless, he knew that Mista is loyal and would never willingly abandon him, but he couldn’t help but worry. That one day Mista will leave him just like his mother did, and once again he’ll be left all alone without that love he was so starved for before. Sometimes he finds himself reluctant to send Mista on risky missions for fear that he’ll never return. He can’t help but be jealous whenever someone flirts with his Bf/Fiance/Husband and 7/10 he will intervene. Again, he knows Mista wouldn’t cheat on him, but what if he finds someone better? Someone who actually knows how to be in a relationship and treat him better than Giorno ever could?

Those feelings fade with age, they never truly dissappear but they do become less prominent and intrusive the more they settle into their relationship. At some point Giorno even tells Mista about this, and the man is nothing but supportive and reassuring.

My beloved husband and I had gone out today, the sun was shining, hand in hand we walked to Giorno’s special place he picked for us to have our weekly date night, but this wasn’t a place I was expecting from the man who ruled Italy.

“Giorno, Why are we at a goofy goobers?” I snapped my head towards Giorno, The smile winded on his face “Well you did say I could choose where we can go for our date.” He teased “Giorno we both work in the mafia and are 25, I don’t think this is a good place for us to be.” He squeezed my hand in assurance “Don’t worry mi amore,It’ll be fun, there’s no children in there, I reserved it just for us.” I tried to hold a frown but it was ridiculously funny how he brought me here and acted as if it was a 5 star restaurant. I giggled a bit before saying “Alright let’s go in.” He started walking dragging me along with him, the goofy goobers building was shaped like a boat but obviously wasn’t a boat, It had lights and the traditional Ice cream parlor door in the front.

Once we had gotten into the building, a bright cheery pink was painted across the ceiling with a pattern, white and pink checkered tiles as the flooring and finally a purple ceiling. Giorno dragged me to the closest table and pulled out my chair for me “Oh my~, Aren’t you elegant today Sir.” I said in a high mannered person voice, Giorno snickered “Anything for my Mrs/Mr/Mx Giovanna.” He joked back, I smiled at him and he smiled back, that warm smile of the man I married always made me feel tingly after 4 years of marriage and 10 years of dating I still get the feeling of butterflies in my stomach.

As Giorno and I chatted about how everything had been and such our drinks came, mine came with a napkin that had a sweet message from Giorno written on it, I blushed at his sweet little act, I was having more fun than I thought I would on this date to Goofy Goobers. Once we ordered our ice cream his being Strawberry Sorbet and mine being [Favorite ice cream/Sorbet flavor] Ice cream/Sorbet, the food came in about 10 minutes, I happily ate mine, feeling the sweetness of the sorbet/Ice cream, the bright cheery colors of the room, the love of my life sitting across from me how could I not be happy? I caught Giorno stealing glances at my Sorbet/Ice cream, I laughed at seeing him eyeing my food, I scooped up a spoonful “Would you like some, Giorno?” Giorno nodded, he held his head out for me to spoon feed him, he kept his mouth open, I guided the spoon to go near Giorno’s mouth before fooling him and putting it into my mouth “You are such a tease, ____” once finishing the spoonful I spoke “You know Giorno, I won’t just give anything away for free.” He sat silent for a moment thinking and then chuckling “Only a spoonful my love.” He scooped up a spoonful of his as I did the same for mine, I opened my mouth and let him put the Sorbet into my mouth, I wait a few seconds before putting the Sorbet/Ice cream into his mouth. I smiled at the sweetness of the Strawberry Sorbet “_____, You have quite the magnificent taste.” Giorno said after swallowing “Of course I do, I married you of course.” I saw Giornos face become a tint of red from my comment.

After finishing our food the waiter from earlier brought us our check, we paid and left hand in hand out of Goofy Goobers. Giorno guided me to the park we go for our daily walks at, the sunset and dimly lit lights of the street lamps made the scenery feel romantic, “_____, Did you enjoy our date?” He inquired as we walked around the park “You were right it was fun there Giorno.” Giorno stopped and kissed me for a second “I always am right when I have you.”

I still love my golden boi from Vento Aureo!

AN: I’m so glad you like my writing. This was very fun to write so thank you for the request!

Bruno was trying to introduce Giorno to the rest of his team, needless to say it wasn’t going well. Everyone was ignoring Giorno and acting like he wasn’t there. The blond boy didn’t really mind, but Bucciarati was a bit pissed that his gang was acting like a bunch of snotty brats.

Mista was reading a book, Abbacchio was blasting music through his headphones in an attempt to tune everyone out, Fugo and Narancia were doing math homework and trying to kill each other, and you were….. where the hell were you?

“Have any of you seen Y/N,” Bucciarati asked.

That surprisingly got the gangs attention. Abbacchio took off his headphones and Mista placed down his book.

Narancia turned his head to look around the restaurant. “No, I don’t know where she went.”

“Now that you mentioned it she has been gone for awhile now,” Fugo said concerned.

“There must be another member to the gang,” Giorno thought to himself. He looked around the room a bit too, even though he didn’t know what you looked like yet.

“I’m right here,” you said in a quite voice. You gently rolled yourself out from underneath the food cart that the cake had been placed on. You push yourself up into a sitting position and raised your hand.

The whole table was silent for a second. “When the fuck did you get under there,” Mista asked.

You yawned and stood up. “I would love to tell you, but I honestly don’t remember.”

The whole gang just stared at you. They all knew about your tendency to fall asleep in random places or just be sleepy in general, but each time you did, it made everyone shake their heads in amazement.

You rubbed your eyes and looked around. You saw a boy with in a pink suit with a crazy hairdo. It was nothing new though, I mean just look at the rest of your team.

He had a straight face on and he looked very serious but you could see a small blush on his face.

You looked at the rest of the gang then back at the new boy. “Who’s he?”

He cleared his throat and took a breath. “You just met these people, you can’t already be fawning over the girl. Act serious,” he thought to himself.

“I’m Giorno Giovanna.” He held out your hand for you to shake it.

You smiled. “It nice to meet you, I’m Y/N L/N.” You shook his hand very gently due to your body still being slightly asleep.

Giorno blush became more visible. You were adorable. He realesed your hand and looked away. Bucciarati pulled up two chairs for the both of you. “Sit here. I’ll be back.” Bucciarati left the restaurant leaving you alone with the rest of the gang.

Giorno talked a bit to the others in an attempt to be professional. Every now and then he would see you with your knees to your chest and your eyes closed. Even after sleeping under the cart you were still tired.

Giovanna didn’t understand how a mafioso could be so cute, but he would have to think about that later since someone interrupted him from his thoughts. “Hey Giorno,” Abbacchio said. “Would you like some tea?” 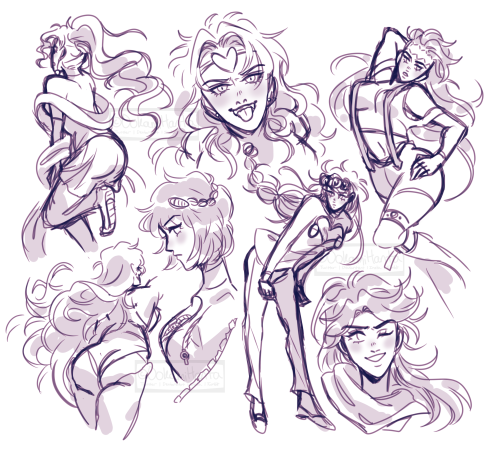 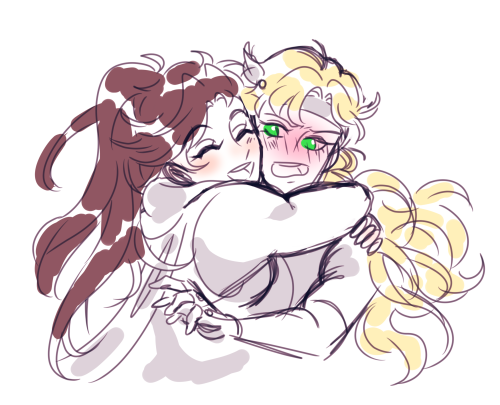 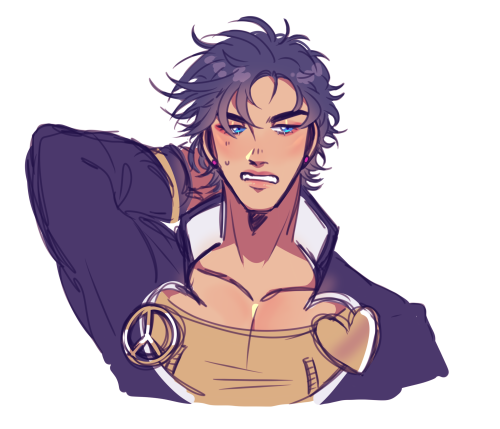 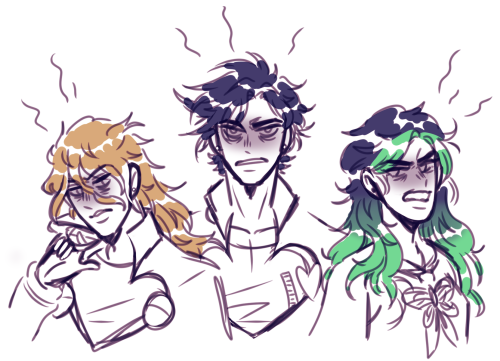 Just imagining how great dates with gang-stars would be 🥺💭❤️

Giorno: This place is really creepy.

Bruno: Not as creepy as Abbacchios internet history.

One Fugio and an Abbacchio that’s just been told to babysit while Bruno is out or something. 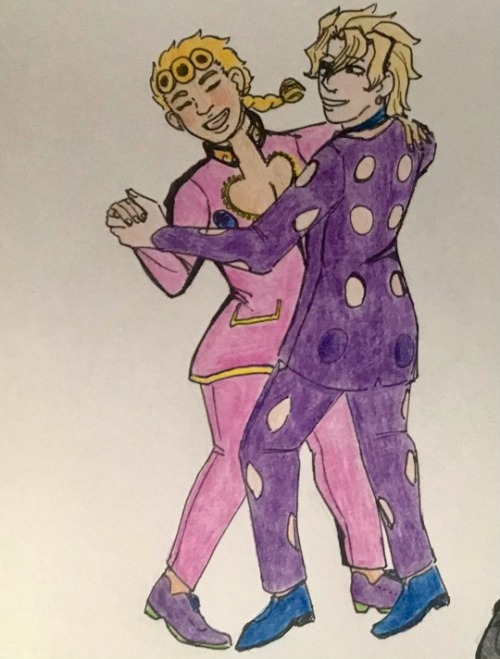 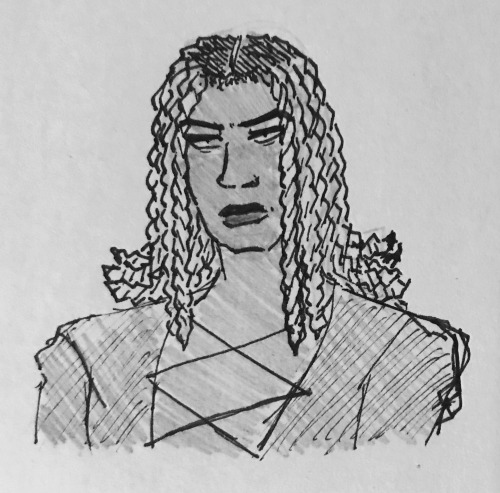 Dress up with the mafia boss Giorno’s dads!

i like how when polpo asked what giorno could do he instantly demonstrated how good he was at pickpocketing and right after went “i can also fit my ear into my head :)”

don’t mess with me - temposhark reminds me of don giovanna

[ID: Three edited manga screencaps of Giorno Giavanna from Jojo’s Bizarre Adventure with a scenecore theme. In each his hair is colored black, he has black lipstick and eye makeup, and his outfit is black with bright pink and gold accents. The background is a checkered pattern of neon green and black. In the first image, he is facing right and leaning back with a dismayed expression. In the second he looks at the viewer with a neutral expression. In the third, he tilts his head and glares at the viewer. End ID] 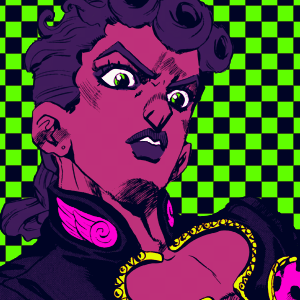 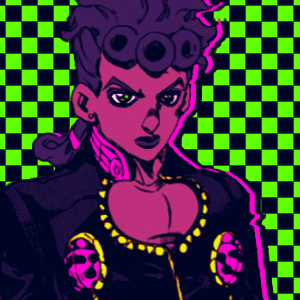 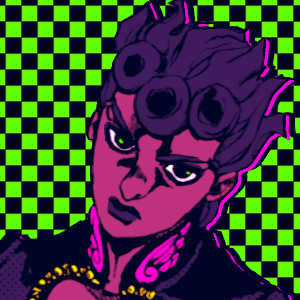 Giorno: yeah, i think so, why did you wanna sing?

Rykiel: no, no, you’re right we should definitely rap, let’s all rap, okay, we’re gonna rap

Giorno: good, so we all agreed that this is gonna be a rap song

Ungalo: when we’re done can we go to Chili’s? 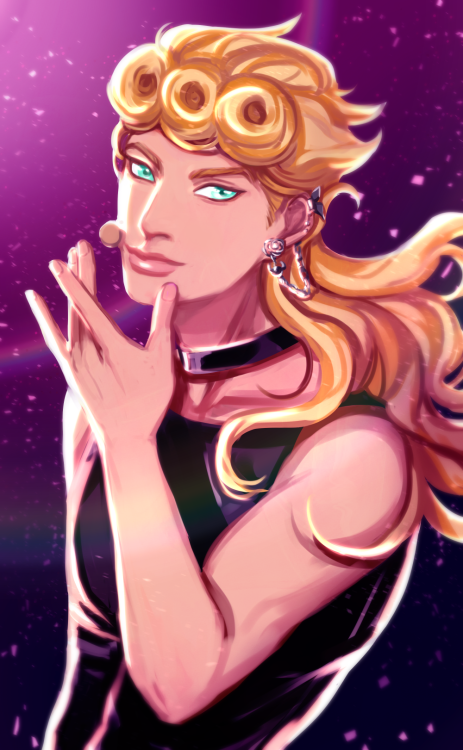