nanami likes takes you on coffee dates. gojo gets upset and pouty because he doesn’t get invited, so the next time you two go you invite him.

and of course, gojo orders a large hot chocolate with extra marshmallows.

Ah, I don’t enjoy discussions about power scaling, tbh :/ Especially not if it includes other shows/manga.

#Gojo Satoru#jjk spoilers#jujutsu kaisen#ask#anon#thanks for the ask! :)#I find the ideological sides more interesting#Getwo and Yuki are working toward extremes#whereas Gojo's priorities are smth else#where does Sukuna fall into?#but I do think Sukuna will have his own hacks to match Gojo#other characters? eventually? I genuinely don't know#but can't help but be a lil doubtful#and also think that it's not even that important at the end of it
2 notes
meatloafu
Text

I’ve been cackling like a hyena over the fact that some of us ship Nanami (Gege’s favorite character) and Gojo (who Gege despises).

I like the ship, but the irony doesn’t escape me that they created such a dynamic between the two, that a good portion of us zoomed in on them!

Evidence: (There will be spoilers for both anime and manga)

Both are significantly changed and damaged by a moment when they are unable to save someone. Geto when he couldn’t save the girl slated to be the Star Plasma Vessel and Itadori with Junpei

They also have both run away from the Jujutsu sorcerer world and were hunted by that group after being responsible for the death of a large group of people. (Though Itadori was not in control of his body at the time)

The difference between them (at least at the moment) is Geto lost his faith in humanity and changed who he decided to protect and that tipped him into something a younger him would have hated. Someone who stopped seeing the humanity in people.

Itadori on the other hand has lost faith in himself. In his ability to help people. Where this will go is yet to be seen

Their words suggest that they want to be selfless but often their actions are selfish. Even Itadori’s sacrifices and power plays are selfish to an extent

Fushiguro and Gojō on the other hand are cynical. Young Gojō says outright that “righteousness and responsibility have nothing to do with Jujutsu” and I think that’s because he is already critical of the institution he’s a part of but I also think when he says “righteousness” he actually means “self righteousness” that Geto’s comments about how the strong must protect the weak is a reflection of his own ego but that he’s hiding it under pretty words.

Fushiguro is also cynical and his main conflict with Itadori is that he doesn’t see the point in saying you’ll save everyone when some people don’t deserve it and you can’t realistically save everyone anyway so why not be choosy. He has the same contempt for Itadori’s idealism that Gojō had for Geto’s

Gojō and Fushiguro also say selfish things and suggest they have selfish motives but their actions are often in contrast with that.

Gojō goes out of his way to keep civilians safe and goes into teaching to protect and nurture the next generation even though he thinks he’s ill suited to teaching because he doesn’t trust that anyone else would take care of the kids the way he does. And by being a teacher he constantly is putting his neck out there to provide a home to misfit students.

Look at his students:

Yuuta: A distant relative who has a huge curse and who the higher ups wanted to kill

Maki: A girl who can’t even see curses and was basically abandoned and hampered by her family

Inumaki: A boy whose curse speech would normally have put a death sentence on his head

Panda: A cursed corpse that can think and feel and grow that I am sure the higher ups hate

Fushiguro: who he basically stole from the Zenin family and whose father was an outcast and killer

Kugisaki: feral gremlin from the countryside

He is selfish in other ways of course but he is also willing to put himself on the line for others. Though he’s doing that from a position of strength and he knows that

Fushiguro similarly is much less selfish then he acts. The most obvious is that he is willing to sacrifice himself at the drop of a fucking hat (stop being so willing to die Fushiguro! It’s bad for my blood pressure!) But it presents in other ways. Like when he asks Gojō to find a way to save Itadori.

The difference between him and Gojō is that while Megumi has the potential to have an insane amount of strength he is not working from a position of strength like Gojō. So when he puts his neck on the line he’s a lot more vulnerable

1. Itadori has not abandoned his morals and compassion even as he has become more of a realist

2. Fushiguro’s appreciates Itadori’s compassion even if he doesn’t share it

3. The balance of power and vulnerability between Itadori and Fushiguro is different from Geto and Gojō. I think in a lot of ways they have the potential to understand each other better than the adults were able to

But whatever happens will be interesting to see playout

MEGUMI ONLY RESISTS AT THE LAST POSSIBLE MOMENT

Emoji for when he breaks up with you at kfc

i physically cannot stand the whiplash of going through the jujutsu kaisen tag because 70% is “haha look at funny gojo meme! he’s so powerful and cool” and then out of nowhere i get punched in the face with reminders of how fucked up the manga is right now 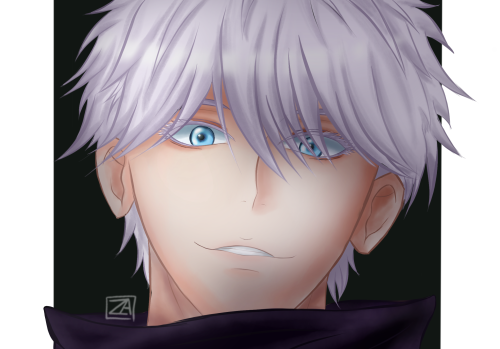 So I recently commissioned the amazing @kejiyaa to draw me some soft NanaGo, and they did not disappoint! I mean, just look at this beautiful masterpiece 🥰💗

If you’re looking for someone to commission for art, especially if you’re in the JJK fandom, I absolutely recommend Kejiyaa!

Please do not repost, crop or edit this artwork in any way, or remove the description or source.

The Café on Sundays | Satoru Satoru

SYNOPSIS: You meet him in line at your favorite café.

NOTES: Thank you for requesting!

You looked normal. It was why he never noticed you were blind when the two of you first met.

You didn’t wear those black, round glasses like the Blind Mice or walk with a cane and stumble around like in the movies, nor were your eyes clouded over like the blind witches in horror movies.

You had a fluffy Samoyed dog as a guide dog. He was lively and alert and was the best guide dog.

You had met Satoru when you stopped by your favorite café for a cup of coffee.