This pattern is not mine. I got it from forineffablereasons right here on tumblr.

Sorry for the wait. I can get images to work on my phone or tablet. I had draw Michael in a bonnet for you but it’s having issues. You should see them tomorrow for my Friday post. Thank you the ask.

A lil’ comfort portrait of one of my favorite characters, It was a sin that I still haven’t drawn her

I have been writing I swear. I’m trying to push through my annual winter dry spell. But I’ve also made some TikToks…

This was the funniest in my opinion and it got like 6 views. So here it is!

depending on how the queue spits these out, you may have seen the finished version first 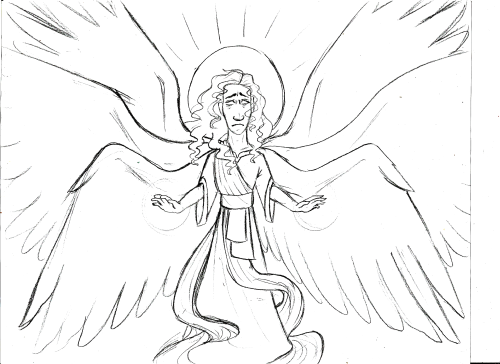 Everyone deserves a hug

The narrators for Winne the Pooh and Good Omens have the same vibe.

British narrators expound on minute and inconsequential  details and have opinions on the proceedings of the plot  and have fully embraced the nonsense of their literary world.

(If you like this character dynamic you might also enjoy the webcomic that I’ve been working on and hope to start posting soon!) 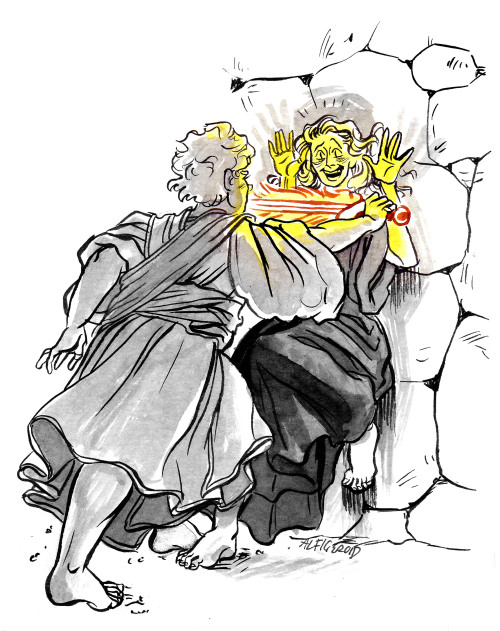 Anathema Device is bi because:

2 - she’s presented to heaven and hell (Azi and Crowley) as Bicycle Race plays, a song of being bi made by the one true king of bi people: Freddy Mercury

I rest my case.

This is the final update for this comic, and our journey ends here with them. Thank you for reading and staying till the end to support me and this comic. It was such a long ride and new ones willl come along soon enough.

I’ll still be creating content for this AU of course, and Sweet Tier people up on my Patreon will have the latest news about the physical book and preorders before everyone else.

Be sure to leave me your thoughts, I know Tumblr isnt primed for comments and feedback, but knowing what you think or tag the comics can literally make my day.

Also, last but NOT least, thank you @D20OWLBEAR​ for being in this project with me and providing me with a companion written work alongside the comic! It is now available on AO3 as BOUND TO THESE BONES, UNTIL DUST ARISES. If you like the comic, don’t forget to give ens kudos for being responsible for half is written in it!

Your Own Pet Serpent (fun)

Day in the Life (domestic)

Prettiest Girl at the Party (fun)

Floor Is Lava based on @cliopadra comic (fun)

Me spending 5 minutes on something not related to good omens: see, I knew eventually it would fade and now I can move onto other things. It was fun while it lasted.

Me five minutes later seeing a picture of David Tennant: OMG Crowley and Aziraphale are so in love and I can’t stand it. I should watch Good Omens again.

AO3 Collection | Thank you to @ineffable-wives-central for the prompt list!

The promise of someone who would love their scars seems quite distant to Aziraphale and Crowley.

Set in my Castle Terra AU, long before they meet.

Aziraphale sighed softly as the doctor left, and closed her eyes. She hurt, even with all the medicines, she hurt. Her hip and her leg and her belly were like fire, even with everyone being as gentle as they could. If she ever walked again, she’d limp. They couldn’t promise she could bear children safely. She’d live, was about the best they could give her, and in the depths of her mourning heart, she wasn’t always certain that was a prize. It hurt so much, and she was scarred now, changed forever, and it was so scary.

She didn’t remember much about her time in hospital. And then she’d come here, and Madame was nice. Really nice. Aziraphale was learning that people were mostly nice to a fourteen-year-old war refugee with life-changing injuries and no parents.

(Oh, God, she couldn’t think about her parents, not right now.)

She figured she was too pathetic to be anything but nice to, but she tried to be very, very good and very quiet and not complain too much to Madame.

She smiled, because it was polite and because Madame kind of inspired it. She was so kind, genuinely.

“I’m sorry it hurts, duck,” Madame said softly, now stroking Aziraphale’s hair. They both liked that. “I’m so sorry. Your poor body, there’s so much still to heal.”

“And some things won’t,” Aziraphale said softly. “What if I don’t walk again? What if my scar is big and ugly?”

“Then we will deal with it,” Madame said firmly. “There’s still a place for you in the world, love. And plenty who won’t mind about a scar, or anything else.”

“Really. I promise. Someday you’ll have a friend, or maybe a lover, and they’ll think you’re the best thing out there, scar or no scar. They’ll love you and your disability, just like they’ll love you and that pretty silver hair, and those big eyes.”

Aziraphale giggled softly. “You have a lot of faith in people.”

“I bloody know people, miss. You listen to me.” Madame tapped her nose, and Aziraphale smiled. “Someday you’re going to bring me home a girl who thinks you hang the moon, and I won’t be surprised in the least.”

Aziraphale just nodded, and closed her eyes. The pain from the exam was easing, and they wouldn’t have to change her bandages until tomorrow. She couldn’t sit up on her own yet, could hardly do anything for herself, and even getting out of bed was weeks away. But she daydreamed a little, thinking of that someday-girl – or woman – who loved her. She wondered what she’d look like. Tall and slender, Aziraphale liked those girls. Pretty. Very smart. Good jokes. A girl who didn’t mind Aziraphale’s scars; that part was important, she reckoned. She’d have to be careful of that.

She drifted off, not quite dreaming and not quite daydreaming of that someday girl, all legs and big eyes and pretty hair, maybe curly like Aziraphale’s. Kind. And the way she’d love Aziraphale, and Aziraphale’s body, no matter what.

Crowley sat on her bed – her bed! – and touched the coverlet. It was lovely and soft, and she looked up; her view was beautiful. The apartment was beautiful, really. Her home now, where she could be Crowley, and be safe. Welcome. The language was the same, everyone speaking Court Standard, at least. It was just everything else that was incredibly different, from the clothes to the food to the trees and the smell of the laundry soap they used here.

It wasn’t that she was homesick, not at all. For one, this was home now, and she was glad and grateful. Auntie and Uncle loved her; they’d taken her in without question – her and Chae! He was already a great stablehand, and would really grow here, she was sure of it.

She lay down on the bed, curling so she could look out the window at the sunset, and played a little with the fabric of her gown. It was made for her, tailored to her skinny frame, and she did love it. She loved her new corset too, and her hair growing out – Auntie had helped her put it up, to hide how short it still was.

She should be happy. And she wasn’t not happy, not exactly. No one was going to hurt her here, she kept reminding herself. She was safe. She thought it just might take a little bit to actually feel safe.

Crowley hugged herself, and daydreamed. Safe. Wearing pretty dresses, being a lass. Learning how to princess. Safe. No one hitting her. And then, someday…a girl. A gorgeous girl who loved her, who would hug her the way Crowley was hugging herself. Who would laugh and kiss, and not mind what was between Crowley’s legs. Who might…even think she was beautiful? Pretty enough, at least. And they’d hold each other and kiss, and she would stroke Crowley’s back and help her keep herself safe. Never hit, never leave scars, never yell, not really. Be gentle.

Crowley smiled, eyes closing so she could better daydream. Tall and curvy. Pretty hair, pretty eyes, smart. She adored smart girls, not being very smart herself. Not too bookish, though; she liked to have fun outside, and a girl she loved would probably like that too, where they could go on rambles or even go riding, she guessed. She was to start learning to ride sidesaddle someday. Kind. She would have to be kind, above all else. Not too sugar-sweet; Crowley liked girls who were quick with a tease. But kind under it all. That had been her problem before, girls who weren’t kind. People who weren’t kind. That would change.

She hugged herself tighter. What silly dreams she had. But – maybe. Someday.

I watched the show again so you know what that means

Send. Whatever. You. Have.