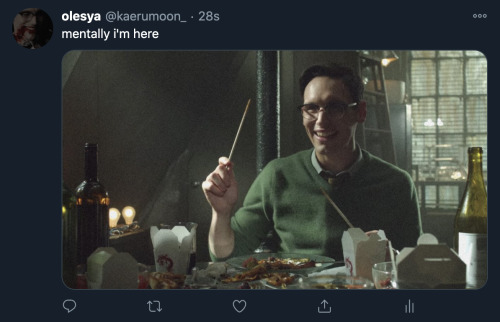 Hello everyone! I want my dash more full so I’d like to follow new people¿ Right now i’m submerged in 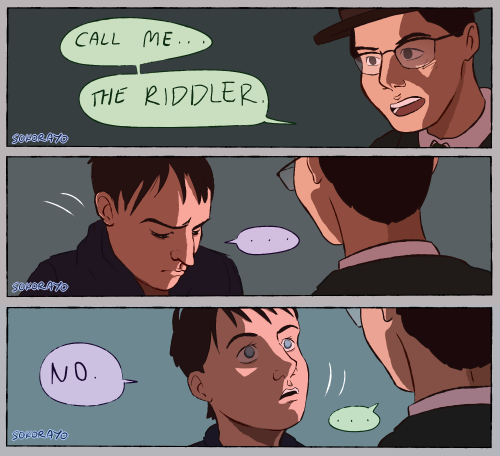 In this show, Selina is so often put in situations that are desperately unfair, and Bruce is often the meddler who makes those situations worse. I feel like she needs to spend more time with the girls than with him. Bruce is a bossy little disaster when it comes to Selina’s personal affairs. They’re both young and exceptionally foolish at this stage, of course, but Bruce definitely needs to learn to back off. Not that he ever does. This is just one more issue I attempt to adamantly fix when I write them. Bruce and Selina are far better off with a BFFs type relationship than a romantic-shaded one as seen onscreen. It’s that dimension that seems to twist Bruce’s behavior toward her most of the time. I just…am not a fan of the harm that comes to Selina as a result.

No spoilers, but the first chapter of Who Needs Enemies starts of disgustingly domestic

So you can look forward to that

this was supposed to be a fanart of Mr. freeze from Gotham but I can’t draw faces properly so now you have this I guess

I have to say, writing Gotham fic comes with its own challenges. Like wondering if Oswald’s characterisation is off if you’ve written two scenes and he hasn’t lost his temper once.

Then again, I also get to spend time thinking about how Oswald wpuld moon over Ed, and that’s a lot of fun.

Ed tilts his head, and his hat casts shadows across his sharp cheekbones. His grin gleams like the edge of a switchblade. Like the best things in Oswald’s life, he’s dangerous and more rewarding for it.

Summary: There was something ironic about a podunk little town in the middle of nowhere being named Gotham. There was nothing but fields and dirt roads as far as the eye could see. There was the occasional tree and gravel road— if you were fancy— and an abandoned barn or two. At least the skies were pretty. That was one detail that Ed could say he missed about his hometown.

hold dawn a minute- did anyone else see mr freeze pull that crap earlier?????

They’re canon for me I don’t care 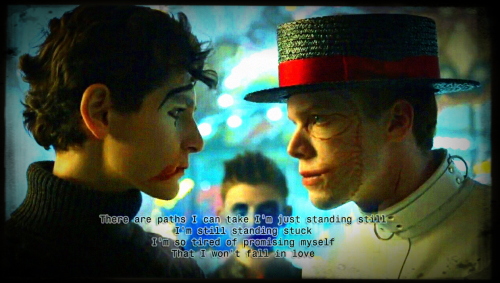 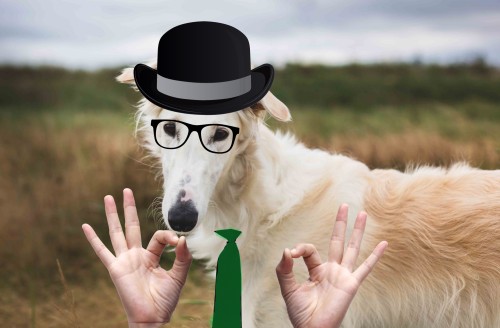 Jeremiah, immediately upon meeting Bruce: Can we please stop pretending we’re not both feeling this? Baby, you’re killing it and I don’t know how much more I can take

Though not at the time, because of the labor it took, I really love this painting now. It was the first time I’d ever attempted to paint a “figure” and it ended up reminding me of myself. Both my friend and my brother said that it looked like me. That was not my intention, however, after thinking about what they’d said, I realized this figure and I’s similarities: black, narrow chin, “pencil neck”, big boobs, expressive “pointy” cheekbones, floral-like big hair with curls, strands of hair/flowers falling out, my name “Yolanda” is Greek for “violet flower”. So apparently I painted an abstract version of myself without even noticing. This is probably why she was such a work in progress and so taxing to create and build upon.

Jerome, to the legion of horribles: we are a bunch of young offenders! and not one of us knows how to steal a car?!

Gotham!Bane/Eduardo Dorrance has no family.

My personal theory on Eduardo Dorrance that he’s an orphan, like his parents abandoned him. He was found by military soldiers. He’s raised as a military soldier and few years and months later, he’s become the leader of Delta Force Leader and Nyssa Al Ghul was his boss.

So his life as adult showed the canon divergence.

Brutal honest opinion; I like Shane West as Bane.

But seriously, who’s King Snake? That makes no sense.

Summary: It’s only been a few months since Harleen’s birthday and her new normal is undoubtedly strange; her and Jerome’s lives are completely intertwined. It’s not quite a relationship, but they undoubtedly have a growing and twisted connection. For once in her life she is happy - until Jerome’s past begins to unravel and she discovers that he has been less than honest with her.

Playing around with some procreate brushes

This and more on my patreon! https://www.patreon.com/Yanderebeats

#oswald cobblepot, #my art, #gotham, #the penguin
37 notes · See All
Next Page