In France they don’t say “I love you”. They say “permets-tu” and I think that’s beautiful.

so. the June Rebellion is coming soon.

almost started crying on automatic because of Grantaire. 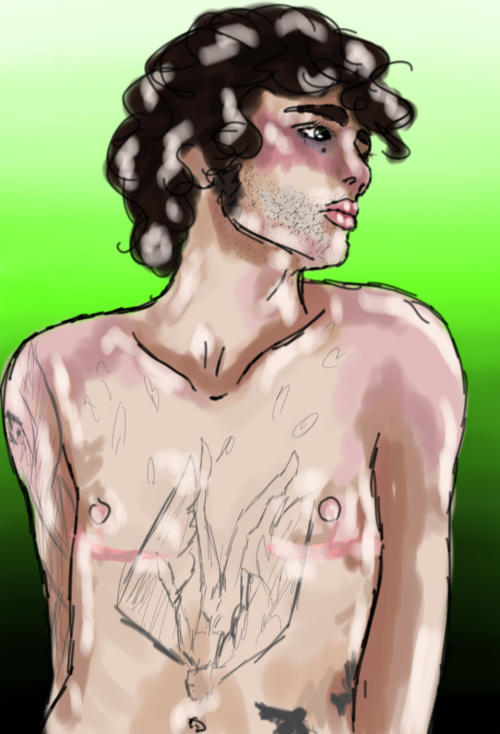 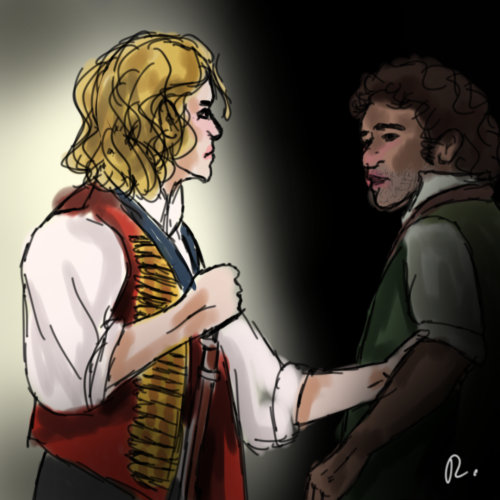 Okay I just read about this man who stole an octopus and decided the most reasonable place to hide it would be in his pants and I dunno this looks like something Grantaire and Bossuet would do while smashed.

Imagine the morning after when they find out there’s an octopus swimming in the bath tube.

“How is that thing even breathing?”

“I think we put salt in the water”

“I’m never going out with you again”

“Why the hell we decided to steal an octopus anyway?!”

“they wanted to eat him!”

“and so you put it in your pants”

is it just me or is this grantaire 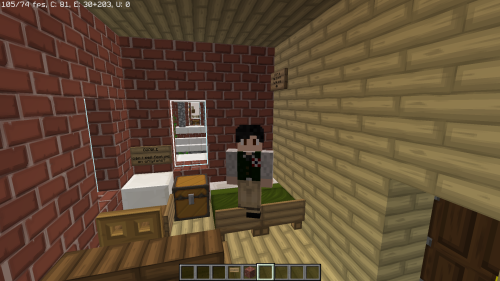 I’ve tried my best! I hope you’ll like it, and thank you so much for the prompt! <3

The soft music floating through the air, the buzzing noise of their old stereo and the rich smell of amber incense revealed that Grantaire had retired to his studio – Well, not entirely his. Not yet, at least. The white, empty room was nothing like the old one, but ehy, the had moved in only a month earlier, and Grantaire was already leaving his mark inside the room, splattering paint and scribbling notes on the walls, his old desk and library due to arrive in a week or so.

They were still working to make the little apartment their own, to make it feel like a home, and just the thought of it – Their apartment, their home, their life together – had Enjolras giddy, squirming between the sheets on their bed.

The faintest sigh escaped his lips and he rolled on his front, his face ending up in Grantaire’s pillow.

He sighed again. A quick glance at the alarm clock on the nightstand told him it was time to get up and start his day. It was Monday and, thus, his turn to go grocery shopping – Yes, they worked like that.

On his way to the kitchen, Enjolras let his knuckles scrape lightly on the studio’s door, amused at Grantaire’s choice in music. He pressed his forehead on the door, smiling softly at Grantaire’s half- singed “Good morning”.

“Good morning. Are you really listening to Bryan Adams in there?”

The door cracked open and Grantaire’s smiling face peeked out to mock-glare at him, “There won’t be any Bryan Adams shaming in this household, young man.” Grantaire leaned in to steal a kiss, “You’re lucky I love you. I’ve lost friendships because of Bryan Adams Shaming, you know?”

Enjolras grinned, “Oh, really?”, he pecked Grantaire’s cheek, rubbing his lips on his stubble, “How lucky I am, then.”

Grantaire stepped out in the hallway, clicking the door closed behind him to lean against, “very lucky indeed.”

Enjolras flicked his nose, “You dummy, do you have time for a cup of coffee with me, before I Jump in the shower?”

Grantaire gasped, and his hand flew to his chest. “You wound me! And here I thought you’d want me in the shower as well!”

Enjolras tilted his chin, pondering, “Maybe, if you’re good to me”.

In the end, Enjolras showered alone, Grantaire slipping back in his studio shortly after their kiss-filled-breakfast.

Bryan Adams was still running in the background, and by the time Enjolras came out of the bathroom he had lost count of how many times he had to listen to the same song – Oh, yeah, It wasn’t the whole album, Just the same song playing on repeat-

It was still easy to shrug it off, Grantaire had his antics just as much as Enjolras had his owns.

Grantaire had his antics, sure, but, as Enjolras opened the front door, hands full of bags filled to the brim, the same song was still playing in the studio.

Between grocery shopping and meeting up with Combeferre, the whole morning had gone away. Enjolras was a bit concerned at that point.

He disposed his shopping items and went to knock on the studio’s door, refraining from entering the room. Not that Grantaire would be angry, but more often than not it felt like intruding in such a personal progress that Enjolras tried not to step in, if Grantaire was in the middle of a painting.

“Grantaire?” he called, listening for an answer that didn’t came. “Grantaire? Have you morphed into a Bryan Adams clone yet?”

Grantaire’s head popped once again from behind the door, paint- stained and grinning widely, “not yet, but I think I’m almost there”

Enjolras huffed, “Grantaire, how are you seriously still listening to this song? I was gone for four hours!”

“It’s doing wonders for my work! You know, sets the perfect mood and all that.”

“And you’re adorable. Want to come in and see?” Grantaire moved aside, opening the door a bit more.

“Of course not, my querido,” Grantaire took Enjolras’s hand, “come in”

In the studio, the curtains were pulled tight, Grantaire acting like the most faithful of Friedrich’s students, and Enjolras still couldn’t understand how Grantaire painted so well in such little light. Bryan Adams was still singing as Grantaire guided him to stand in front of his easel.

Enjolras’s breath caught as soon as his eyes landed on the canvas , heart swelling almost painfully in his chest. Grantaire came to rest behind him, hugging his waist with his chin on Enjolras’s shoulder.

Before them, Pont Ferret’s wild beach lived in quick strokes on the canvas, so real Enjolras could almost feel the wind on his face. He turned around in Grantaire ’s arms, hugging him tightly.

“Well,” Grantaire said, “I know how much you love that place. I know how much it means to you. And, we’ve been trying to make this place our home but, you’re my home and, and, well, I thought it would’ve been nice to gift you something that could make you feel the way I feel when I look at you, when I hold you in my arms.”

Enjolras didn’t mean to start crying, he really didn’t but still, fat tears were falling down his cheeks. Grantaire brushed them away with his thumbs, smiling sadly down at him, “I didn’t mean to upset you”.

“You didn’t, you berk! You made me so happy, I can’t even- but,” he took Grantaire’s cheeks between his palms, “Grantaire, you must know that you, too, are my home.”

Grantaire hugged him tightly, crushing him on his chest. “God, I love you so much.”

That night, as they snuggled on the couch, Enjolras poked Grantaire’s cheek with his nose.

“You didn’t tell me why you were listening to that song.”

Grantaire grinned down at him, “well, my dear” and Enjolras groaned, waiting for the pun that was about to come, “that’s because, everything I do, I do it for you, too.” Enjolras blushed and smashed his face in Grantaire’s neck, “Oh my God, you’re so cheesy!”

“Only for you, my querido.”

Nonbinary Enjolras! Of course. I feel it suits them :) 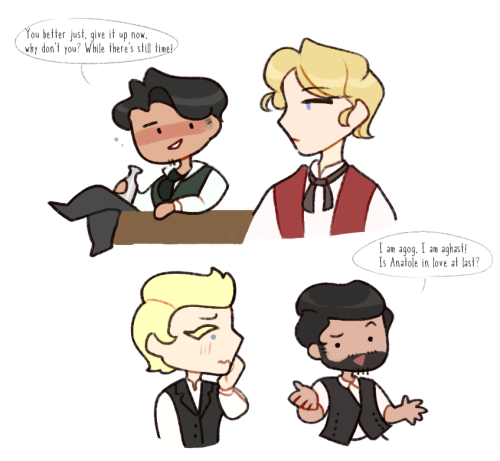 Next part of the thrilling adventures of Grantaire with his downstairs guitar-playing neighbor ! Complete with foot-in-mouth disease.

Warning : some allusions to depression nothing really graphic, but still.

Contains some harsh opinions about protests ; that part has been written before the current events, and do not represent my views on the subject.

When he opened his windows next afternoon, Grantaire was met with silence. Of course. He should have expected it. The rally was over, and Enjolras didn’t need to practice guitar anymore. Good, now he could focus on his work without any disturbances, and finally finish his assignement. Nothing but peace and quiet, at last.

Of course, he couldn’t fool anyone, him least of all. He perfectly knew that he was going to miss the music, due to the pretty blond that was the source of it. But what could he do  He’d missed the opportunity to record his playing and use it as background music. He should get down, ask Enjolras to start playing again, maybe offer to teach him another song, They could sit on the balcony again, on those ricketty metal chairs that squeaked each time they moved, Enjolras’ head so close to his, the blond curls tickling his cheeks….

Grantaire shook his head, trying to get rid of the pictures that kept flashing in front of his eyes. No, he was not going to step down for such a flimsy excuse, he was going to stay here, sitting on his stool, working of his painting, and nothing else. This was going to be a great day for his workload ! He could do it, he could totally do it !

#les miserables, #grantaire, #enjolras, #enjoltaire, #more shenanigans, #grantaire is an idiot, #nothing new, #harsh opinions inside, #not really mine, #but harsh, #small descriptions of depression, #but that's all
3 notes · See All
howmuchchildrensText

Grantaire is really good at baking, but none of the Amis know until he comes late to a meeting bringing cupcakes, and everyone’s like ‘these are so good, where did you buy them,’ and he is like ‘oh, I made them…’

Sorry it took so long for me to get to this😬

That means you guys can send asks.

Enjolras: Make a list of at least five headcanons for a Les Mis character.

Courfeyrac: Find and explain a piece of music that fits a Les Mis character.

Combeferre: Make a character diagram for a Les Mis character.

Joly: Make a funny meme for a Les Mis character.

Feuilly: Make a moodboard or aesthetic for a Les Mis character.

Bahorel: Design a wardrobe in collage format for a Les Mis character.

Jehan: Write a poem about a Les Mis character.

Send a name and then another character or I’ll choose one. (Example: “Joly + Jean Valjean” means I’d make a meme of Jean Valjean.)

There’s a split second when Enjolras takes off from the ice in which Grantaire wonders what he would do if he actually landed the damn thing. But then, he crashes, and Grantaire watches with a resigned sort of expression as the blonde pulls himself up and tries again.

Grantaire sighs, leans against the barrier and pulls his flask out of his pocket, just in time for Enjolras to fall flat on his face. Again.

“Let me know when you’re done cutting up the ice with your cheekbones, yeah?” he calls, and takes a swig.

i bet it was something like The Proposal. the two of them are trying to hide their tears at first but then enjolras sniffs really loudly and the next second they’re holding each other and sobbing and courf usually cries at the ending but this time his tears are from laughter because they’re ridiculous

#exr, #enjolras, #grantaire, #les mis headcanons, #i have a few more requests in my inbox rn dont worry ill get to them tomorrow, #ive been working a lot, #anonymous, #ask me stuff
29 notes · See All
Next Page