Weiss: *walking into the front room* Are you sure we have everything?

Yang: *nodding* There’s no need to be this worried over a single trip.

Weiss: But it’s an important trip and I want to make sure everything is right and-

Pyrrha: *putting a hand on Weiss’s shoulder* It’s okay. I know you havent seen your family in a while and now you have the opportunity.

Weiss: I’m still nervous. What if they dont like what’s going on? What if they think this is all super weird?

Yang: Weiss, it’s your mom and sister. They’ll understand and love you no matter what.

Weiss: *taking a deep breath* You dont know them that well…

Pyrrha: I’m sure they’ll still be thrilled to meet your girlfriends.

Yang: *kissing Weiss’s cheek* No buts. We have everything packed. Your mom will understand and be happy for you.

Pyrrha: *nodding and taking Weiss’s hand* Now, lets go meet your family and tell them that you now have two wonderful girlfriends that are taking care of you.

Weiss: *groaning* Why do I have to follow you?

Ruby: You only need to follow my lead. Beyond that, it really doesnt matter what you do for school. Just make sure you train with us periodically.

Weiss: What do you mean “who’? Pyrrha Nikos is sitting in our class! How are you guys not freaking out right now?

Ruby: I mean… she’s our friend. Why would we be freaking out?

Weiss: *bursting out laughing* Right… Pyrrha is your friend… that’s a good one.

Yang: *shaking her head and walking into class*

Weiss: *trying to calm down* I dont expect someone like you to recognize when you’re in the presence of a celebrity. *walking into class* We need to make sure we-

Yang: *kissing Pyrrha* Sorry we’re late. Had a bit of trouble with the new teammate.

Pyrrha: Dont worry about it. Professor Port hasnt shown up yet, so you guys are fine.

Weiss: *stunned as she watched the exchange* She just…

Blake: *going to sit down in her seat* Oh, yeah, Yang and Pyrrha are dating.

Weiss: But… she cant… 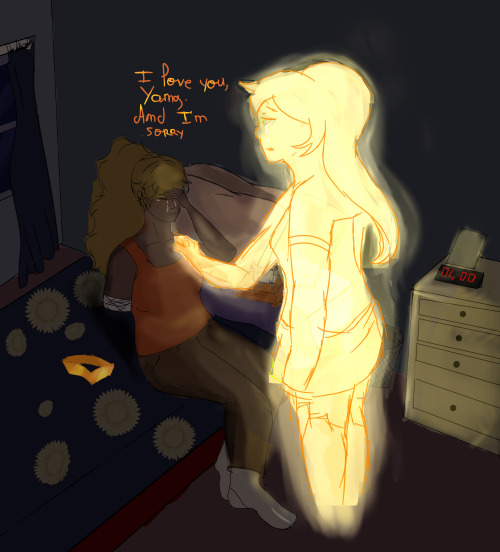 Bc I love suffering, apparently

anyway…he/him lesbian yang getting called “wife” by pyrrha for the first time and he Melts because yes!!!!! that’s him he’s pyrrha’s wife!!!

so here’s the final product of that catmeleon au that i’ve been posting snippets from for the past like… week or so akfhskhsg idk how it pushed to 8k but either way, i had so much fun writing this pairing for the first time. definitely love their dynamic a bunch (and greekfire made a surprise appearance at the end there actually so dOUBLE THE GAY!)

also, i made a spotify playlist for this fic too! yep. full on obsessed.

Pyrrha, walking into her house: Honey! Are you home?

*A bang is heard in the kitchen*

Pyrrha:……….want me to order a pizza instead?

Yang, using the tongs to open a cabinet before cowardly peering in it: Yes please. 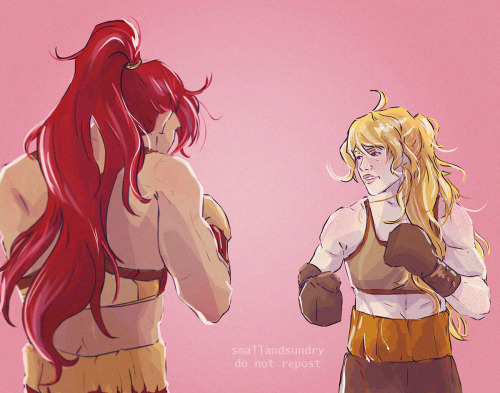 #pyrrha nikos, #yang xiao long, #greekfire, #bees schnees, #sometimes i draw stuff, #this is going to post while i'm away camping with my wife and i wish you all arm and also a wife to go camping with if you're into that, #yes i am aware this is boxing and not mma and it is for the very complicated artist reason of Hands Hard Smalls Lazy
243 notes · See All
rogue-stormText

Is this about Yang/Weiss/Blake or Yang/Weiss/Pyrrha…. up to the viewer’s discretion 😌 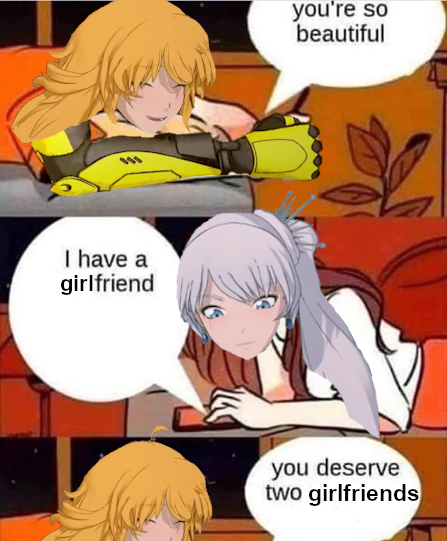 Yang: *stepping into the bath* Oh, this is going to be nice.

Yang: *sinking into the water* About time we get to a real bathhouse. Speaking of, why is a goddess in one?

Pyrrha: *looking over Yang’s body* Just to admire the view.

Yang: *relaxing a bit more, letting the water climb her body and stop at her neck* Oh this hits the spot.

Pyrrha: *blushing and moving closer to Yang* So, what brought you into these travels?

Yang: You’re a goddess. I’m pretty sure you know.

Pyrrha: Maybe I want to hear your side of things.

Yang: I… lost someone important to me and I need to make a deal to get them back.

Pyrrha: *narrowing her eyes* You do know-

Yang: Yes, yes, I know. It’s dangerous. There will be a price I will have to pay. I’m aware. It’s why I’m taking my time getting there and having fun.

Pyrrha: *hesitating* I’m not sure I understand.

Yang: Blake doesnt either. I know what I have to give for payment. And I know getting to the underworld is not going to be easy. So, I’m enjoying life before I give it up as payment.

Pyrrha: But you’re a demigod. Why would you ever want to give that up?

Yang: Who I lost is more important than all of that.

Yang: *shrugging and relaxing* And if it is, so be it.

Pyrrha: *getting up and walking out of the bath* I’ll see you back in the tavern.

Yang: *taking glances at a couple of young women* I wont be out too late.

Yang: *With a bag of stuff she got from town*

Yang: *pulls out a thing of flowers*

Ruby: Awwww, did you get those for Pyrrha? That’s sweet of you.

Yang: *Pulls out a box of chocolates*

Ruby: So are you guys about to go on date or something tonight?

Yang: *Pulls out a thing of specially made wooden handcuffs*

Ruby, confused: Wut? Why would you buy those for Pyrrha? And why are they woode—

did some of these on twitter and here’s what i’ve done so far. they were really fun!!

Sitting in front of the hottest girl at Beacon, Yang had absolutely no idea what to say. Unknown to everyone but Ruby, she’d never seriously dated before.

“I uh…like your muscles?” She tried.

Yang fell even harder for her.

"Are you sure we shouldn’t have brought the boys?” Pyrrha asked, peering over the huge stuff Beowolf Nora had just won her.

“Nah, we never get to spend time together!” Nora insisted. “You know, not ALONE together."

"True…I must admit, being alone with you is quite nice.”

Blake sighed as one of the cats batted at her ears. “I don’t know what it is; I swear this never usually happens."

Ruby grinned secretly as she sipped her coffee. All according to plan.

Ship: Spumoni
Prompt: (to quote)  it’s pretty angsty but, specifically them communicating about how they feel about their times working for Cinder (assuming they’re both not working for her anymore)?

"It wasn’t just you, you know. She hurt me too.” Emerald paused, closing her eyes briefly. “And Mercury.”

She slumped down beside Neo, and turned away when she saw the look in the other girl’s eyes.

But she didn’t pull away when Neo touched her hand.

“I’ve never actually been on a picnic before.” Weiss admitted.

“Oh, they’re lovely,” Pyyrha replied. “I used to go on them with my mother all the time.

Weiss frowned, thinking of her own mother.

May stared dubiously at the coffee Joanna was sipping from. “How can you drink that stuff? It’s so hot and bitter.”

Joanna set down the mug and grinned cheekily. “Hey, I like hot and bitter.”

Ruby lifted her eyebrows. “Penny, those are sharks.”

“I know!” Penny responded gleefully. “So fierce and pretty! They remind me of Weiss.”

Coco shoved Yatsu in Velvet’s direction. “Don’t be a wimp.”

Velvet’s face lit up. “Oh, Yatsu! Did you need something?”

Yatsu blushed. “I just wanted to ask…do you want lunch?”

Velvet gave him a soft smile. “Sure.”

Jaune closed the cupboard door with a sigh. “Where did I-” He stopped short as he spun around; Ren stood awkwardly behind him, wearing the hoodie he’d been looking for, looking adorable.

Jaune tried to hide his blush. “Nah…keep it.”

“Okay, wait…where does it mention who started the war?”

Pyrrha scooted close enough to Ilia that their shoulders brushed “Here.” She pointed to the section of text.

Ilia desperately tried not to change colour and betray her feelings. “…Thanks.” 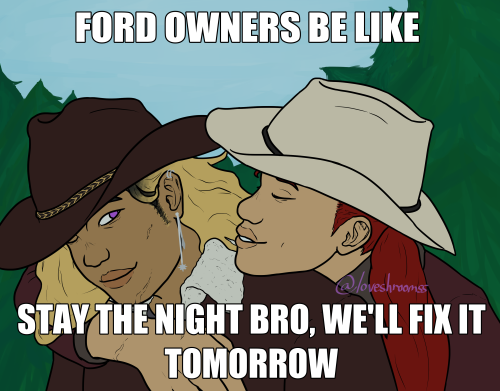 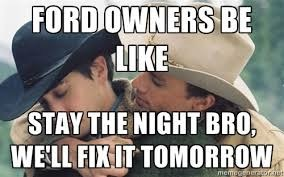 Alright so they are the two keeping fit together since both are beasts after all. Yang loves being pushed to her limit and Pyrrha has an intense workout schedule after all.

I’m sure rumors spread since they are spotted together a bit. It’s just that usually after a workout they just spend time together cooling down and just talking. Yang finds Pyrrha easy to talk to and confide in.

Yang can and will use perfectly good reasons to make Pyrrha flex those muscles. Hey Pyr could you help me with this? All the while just thristing hard. Probably feeling like a creep since she’s sure Pyrrha only sees her as a friend.

who tries to distract the other during the movie

-yang! pyrrha gets really into watching so yang isnt really up to anything she just wants to see how much pyrrha will remain oblivious to

-pyrrha! she has a self-imposed bed time of ten pm and she is OUT by 10:05. yang stays up later working on various little projects

who is big spoon/little spoon

They’d honestly alternate every two days to be honest. They’d have a Boxer named Brutus and sometimes he & Yang will just lovingly watch Pyrrha, as she waters all of the houseplants.

#greekfire, #rwby, #asks, #submissions are always welcome!, #liskysun, #thanks for the ask!
21 notes · See All
Next Page