Those I play in Smash Ultimate the most part one

Do I have a favorite? Hard to choose, maybe the magikarp&wailord or Latios&Latias

So I’ve heard of some Pokemon being in fighting tournaments that are different than our usual Pokemon battles. This includes Pokemon like Pikachu, Ivysaur, Lucario, Greninja, Incineroar, and even Mewtwo. My personal question is though, what other Pokemon would be possible in this different fighting tournament? I personally vote Machamp, but I can see other Pokemon like Sceptile, Sirfetch’d and even Hitmonchan. What does everyone else think?

Hi everyone, this is my second blog where I type swap pokemon. So, here’s greninja’s line as fire types. Greninja becomes a fire rock type. Frokie is just a fire type and frogadier is also just a fire type.

So the idea of this design is that frokie, frogadier, and greninja are made of lava and as frokie evolves, his lava hardens, making him darker. Greninja’s suriken and blade that he is holding is made of lava rock along with some of his body parts. Frokie and frogadier’s frubbles are now made of smoke. Their speed is a bit lower because lava travels slower in real life. I think this pokemon would be in the alola region in the volcano area and when you catch and evolve frokie into greninja, he can learn a move that makes you able to ride on his back in the lava, like how some water types can learn a move to carry you through the water. Although you will go a bit slower than if you were in water because lave is thicker than water.

Geometric Pokemon Drawings made by UnownGamer37 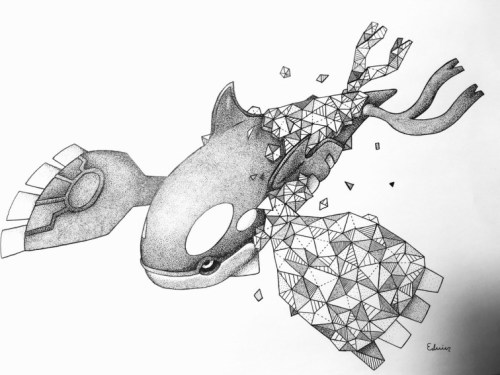 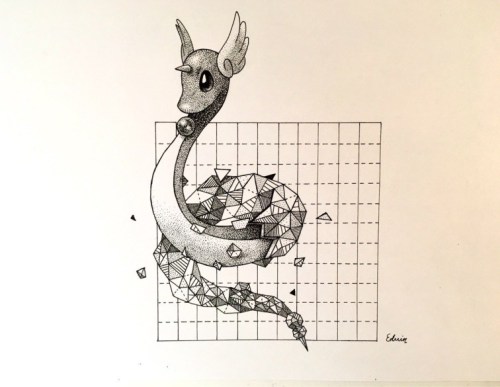 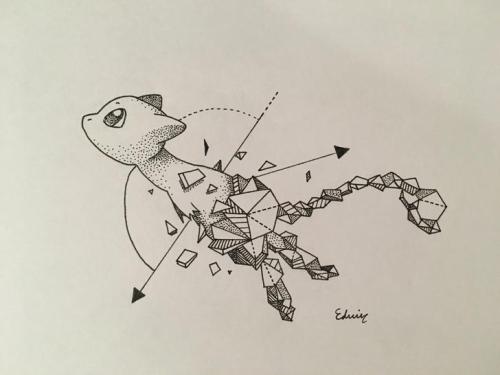 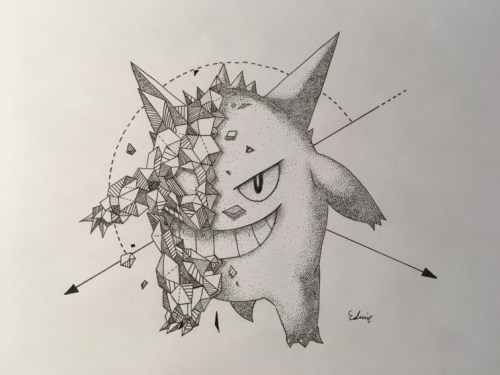 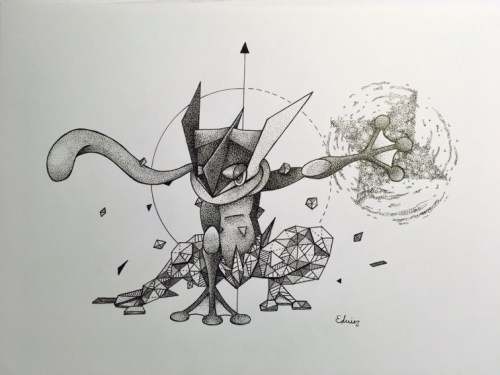 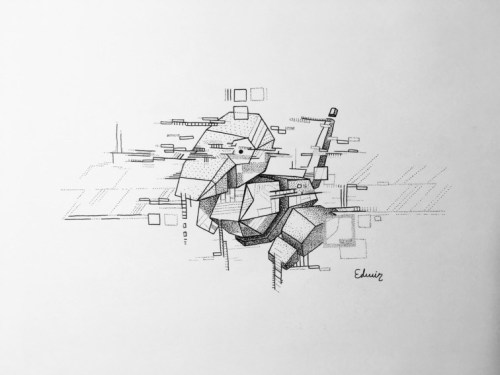 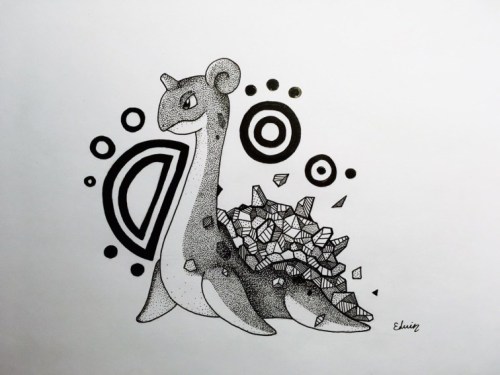 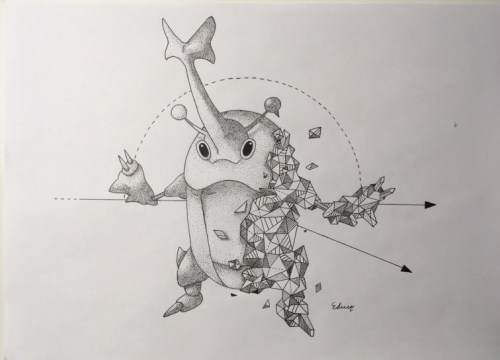 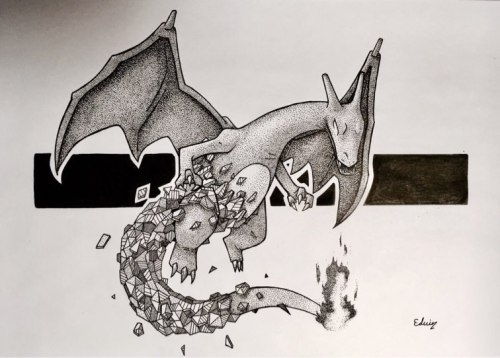 it’s a mostly sunny Sunday at the Gravity Falls Mystery Kids Treehouse Outpost with a gentle breeze on the side. Lili and Coraline sort out the rest of the new flowers as they prepare to make them a new addition to the private garden just below the Treehouse, with their ace Pokémon Cory the Greninja and the braided-eared Braixen to assist in the task.

Coraline: Ok, i think that’s all of them.

Lili: Really couldn’t pick a better day for this job, usually the weather around here isn’t always on our side.

Coraline: Tell me about it, although be used to living in a dull and predictable climate like this for a few years now, I’d say we better rap this up soon or you’ll end up jinxing this whole day.

Lili: Right, ok Braixen, you and Greninja start planting on the north side and we’ll do the south.

Coraline: You heard her Cory, let’s get to work!

With that, the trainers and their Pokémon do to their directed spots and begin depotting the tulips and placing them in the flower bed.

After a half hour, Cory and Braixen only a few tulips to go, but then the sky started to turn grey and has started to drizzle, Coraline and Cory aren’t really bothered as Coraline came prepared with her trusty rain coat and swampers and Cory enjoys feeling the light rain pelting on her royal blue skin and having a small break to taste the water with her long tongue that she accessorize around her neck.

While becoming distracted with catching rain drops, Cory then accidently bumps in to Braixen and falls into a near by puddle, Enraged, with her silky fur coat completely drenched, then gives a sharp tongue lashing at Cory, with the latter trying to apologize but to no avail.

The tongue lashing soon begins to annoy Cory and is now sharing the “ I just can’t stand you! Would get out of my peripheral vision for eternity!” expression, and then Braixen finally unleashing mini Fire Blasts onto to Cory and driving her away from the garden. Braixen then uses psychic to hurl all kinds of pots and stones lying around at Cory, with the latter narrowly dodging. Cory then fires two Water Shurikens at Braixen of which she also barely dodges and this sequence only continues as they are being driven far from the garden.

The whole commotion is soon by heard by Coraline and Lili who rush over to see what the fuss is about, and seeing their partners trying to fry or dice each other while causing all kinds of collateral damage.

Lili: Braixen, give it a rest! It’s not worth causing all this destruction over an accident!

Coraline: Yeah, Cory! Settling this over a spat is obviously not working! This is getting ridiculous!

They’re distant protests go unheard as the water and fire type continue to make shallow Primeapes of themselves.

Lili: Knowing them, they’re not gonna let this down anytime soon.

Coraline: Afraid so, though it’s really not like Cory to get this triggered and downgraded to a blue, tail-less raging Infernape to settle the score; Your Braixen must really be something else.

Lili: What’s that supposed to mean?

Coraline: Not tryin’ to point fingers, but ever since we had them fought last time, it started making this bitter aura that fills the air whenever which one gets on their bad side, like a chemistry project went “boom!”.

Lili: Well, true as that maybe, but it’s probably your Greninja’s antics that make my Braxien lose their composure so easily.

Coraline: Um, for your information Zanotto, my Cory can be just as mature and “composed” as that prissy, stuck-up, hairy-eared diva when she wants to be! She learned that from the best!

Lili: I can’t believe you crossed that line! I would’ve just politely walked away when they make some obnoxious comment at me, but when it comes to my Pokémon (and Raz), they’re asking to bring on the flames!

Coraline: Ooooh! Sounds like I’ll have to brace myself for when the tepig tailed, fire breathing Haxorus arrives to roast me to absolute cinders!

Lili: That’s it! you are literally toast!

Coraline: Let’s see if you brought the butter!

Immediately, Lili began to telekinetically hurl gardening tools and setting fires near Coraline’s position, while she briskly evades on trowel after another.

Cory and Braixen then cease their bickerment after hearing another commotion caused by their peeved off trainers, wondering if this predicament will last as they share the same embarrassed expression and the same face palm.

Well that’s my first story of my Mystery Kids/Pokémon AU! Let me what know u think! I will attempt to produce more of these if i ever feel that spark of inspiration now and then, so be sure to check in once in a while!

Everyone would be happy to interact

@shaymincafe (already answered but I’ll do it again -w-)

I decided to stay with Buttermilk since Darren went with Solblitz, I couldn’t leave him here, besides I don’t like being in large crowds

I’d like to think that this is pretty self-explanatory. He’s a ninja who can use Substitute. And he can use it better than in the actual Pokemon games because he doesn’t have to take a hit to do so.

I also rather like the idea of the “This creature blocks each turn if able” ability, so I’ve used it a couple times in this set and another one. 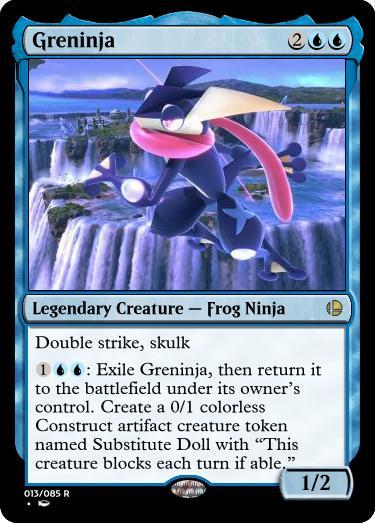 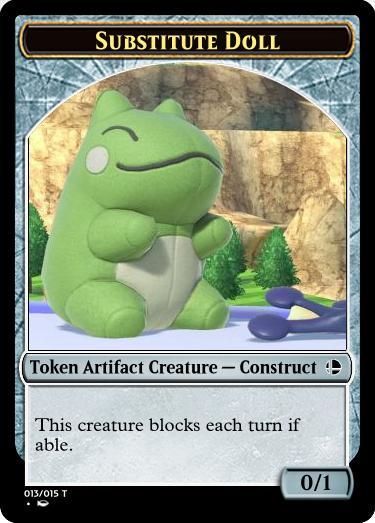 Michele: A Lucario human-hybrid, usually a polite and friendly man, way too brave…

Lissa: Michele’s wife, a very kind and respectful lady, always up to help.

Michela: literally Michele but female. (Shipped with Kats from Luckykatsranch)

Katy: An adopted shinx with alternative colours, cheerful and jolly.

Luna: Lissa’s big sister, a rather calm person, act like a mother sometimes.

John: the big good boy, very strong and tough, but inside is just a chubby cat always happy to get cuddles.

Jay: the silent, usually doesn’t talk much. But he’s a good guy.

Rocky: Far from being a chill guy… He always like to challenge everyone. Other than that he’s a good guy.

Jack: the incarnation of elegance, even while fighting, a real gentleman. And the best archer/sniper.

(shipped with Grace from bubamon)

Edit: Title screen on the Switch.

Well, I did do Mario and Bowser’s already, so that’s one post. But, sure, I can be whimsical and include more here!

Since you’re on my blog, I’m imagining that you want the responses based on my fanfic interpretations of the characters. So, we’ll go with those! (If that’s not what you meant, my bad, and let me know.)

Down below the cut. (And I’ll mostly stick with those that are actual fighters.)

I’m just eagerly anticipating for the type-changing assassin and athlete to duke it out.

Upon entering the dilapidated battlefield, Mabel volunteers to be the referee, while Raz and Coraline position themselves on the opposite sides of the field. With Mabel giving a brief reminder of the rules, then commences the match, the Acrobatic Psychonaut and Bold Explorer draw out their ace Pokémon: Cory, the quick witted and resourceful Greninja, with a knack for mischief and the Amazing, Shiny, Bone-Balancing Lucario with his signature Safety Goggles. Raz makes the first move with an incoming Bone Rush, but Cory easily evades this and manages to get into his blind spot and land a swift Night Slash. Coraline then unleashes Quick Attack with Raz countering with a volley of Bullet Punches. The countering duo both manage to land a few strikes at each other until Lucario backs out and launches a rapid Aura Sphere, of which Cory was barely able to dodge. Cory then projects 2 Water Shurikens with one narrowly dodged by Lucario and the other almost landing on Raz. The spectating kids then protest about this, with Coraline explaining she didn’t mean to do so and looked just as shocked and confused. 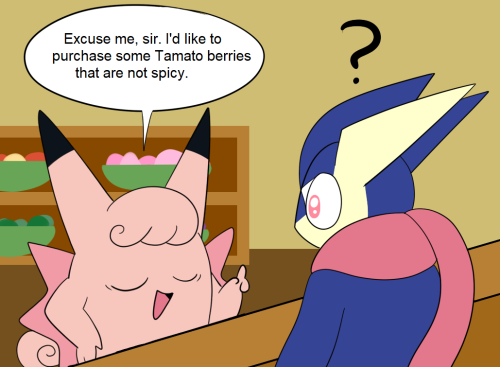 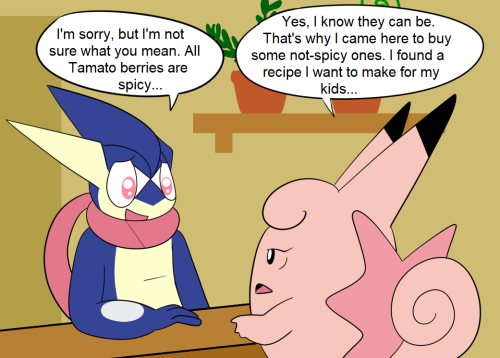 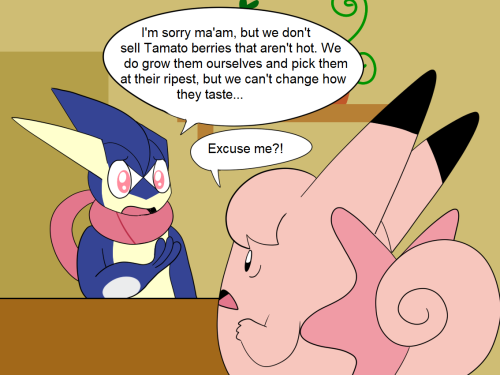 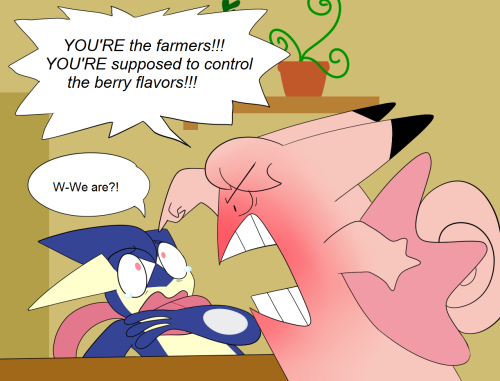 What warpillar is evolving ? When your warpillar reaches the level 10 it will evolve into puparmor the armored cocoon bug/steel puparmor has two evolutions based on the attack and the defence