Trending Blogs
#grimmichi
queen-ploutonLink
I DON'T HAVE A TITLE - and you don't have a heart, so here we are in a cold cold room with nothing but the moonlight - Mothwood, Plouton - Bleach [Archive of Our Own]https://archiveofourown.org/works/23403568

Grimmjow leans heavy over the corpse for a long moment, eyes wide enough that the white rims of sclerae can be clearly seen around blue irises.

His lips are parted, hungry teeth glinting in dim moonlight but the expression on his face is anything but pleased.

There is no endorphin high of survival, no rush of violent pleasure at his conquest. Just a quiet horror, painted disbelief on tanned features.

Carefully, as gently as his hands will allow he brushes the messy ginger locks from the boy’s forehead, pushing them up and back out of the way - a useless endeavour- before strong fingers sweep across equally orange brows and down around open eyes. Brown and dull.

In death, Ichigo Kurosaki’s eyes don’t carry that same ferocious spark, the golden fire that mimicked the raging blue of Grimmjow’s own.

#plouwrites, #bleach, #bleach fanfic, #grimmichi, #what started as a thought of what if grimmjow found ichigos corpse spun out into a story so enjoy, #neither of these boys are good with FEELINGs or FLIRTING, #morons the both of them
1 notes · See All
lightningreiAnswer
sorry i didn’t realize you already did r3! maybe v3 grimmichi?

#bleach, #grimmichi, #The one time you will ever see me draw rhis and its not even serious so eat up, #ichigo kurosaki, #grimmjow jaegerjaquez, #doodles
20 notes · See All
snowyshadowText

i am merely practicing saying goodbye to you.

@incorrect-arrancars​ - (“There’s no joy in squeezing something lifeless.”)

HEEEY SOME SPOILERS FOR NORTH WIND PANTHER (and slightly for Desire and Lust).

Fun FanFiction Fact: In NWP Renji’s whole role at the mercantile and as Grimmjow’s friendly associate of sorts was originally Nnoitora’s, kind of how Nnoitora was developed for Desire and Lust. There was no villain in NWP by writing chapter five or six, but the story needed more than just finding a stranger and taking care of them as the challenge and conflict. Thus Nnoitora was removed as the sole worker at the old mercantile and Renji (plus Hisagi and Rukia) were added instead with details adjusted. Then Nnoitora became our jealous villain because of his known poor sportsmanship in canon Bleach.

Also, instead of a baker Nel was a butcher until Nnoitora’s character was changed. Briefly she was supposed to be the sole object of Nnoitora’s desire (to incite jealousy) and have a crush on Grimmjow but there was just too much pining to make me want to keep her character like that. Also it didn’t make sense with ‘the whole town doesn’t like/keeps this guy at a distance’ theme.

The finale. The final chapter of NWP!

Come through and see…who is the figure in buckskin and where is our drengr?

This story is exclusive to Ao3, only read it there!

About North Wind Panther: The eyes of a hunter are open and watching. A year-round resident of Espada, Grimmjow is not trusted or liked by his small frozen town. Reclusive and stoic he has chosen to watch over the line between town and woods with a killer skill for the hunt, and one day a stranger is thrust upon him. 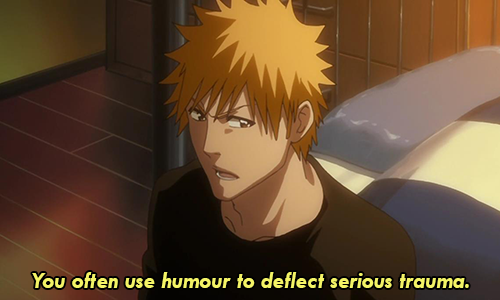 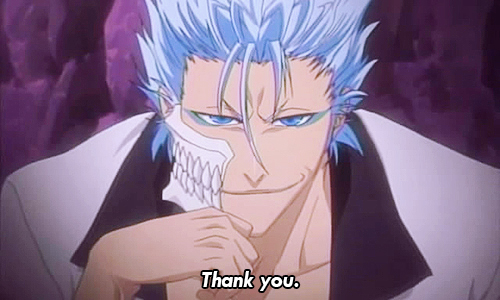 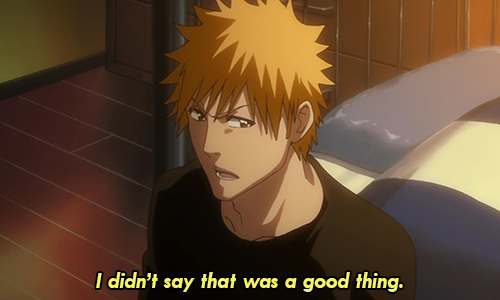 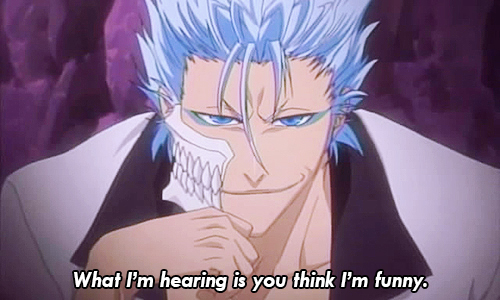 I’m 👀 working on a Grimmichi AU thread on twitter …. so have some stuff I’ve done for it

and a playlist of course, to set the mood 😌

Me, watching the ship wars raging on again now that the TYBW arc gets an anime adaptation: Guys GUYS! You’re all forgetting the one true ship xD

#Grimmjow Jaegerjaquez, #ichigo kurosaki, #grimmichi, #I'm not hating the other ships, #just getting tired of all the Ichiruki or Ichihime debate, #Let's be real, #Ichigo is gay, #Shipping is fun, #It's not a warzone
85 notes · See All
limesiclePhoto 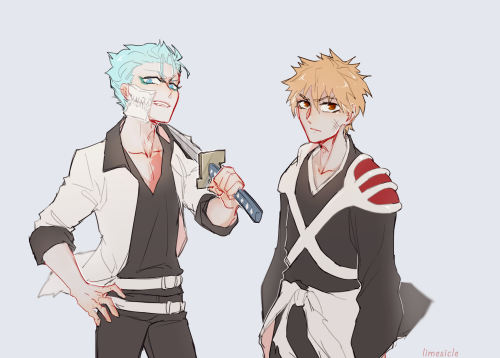 “It’s not my fault I’m late, there was a superhero fight right on top of the train. Dinner still good?”

“Apart from it being cold!” Yuzu threw after Ichigo as he escaped. “Which ones?”

“Oh, Gamuza and Spoonhead,” he called down the staircase. “She curbstomped him into the rails with all four hooves, it was beautiful. Kinda ruined the tracks, though.”

He pushed his bedroom door open.

“I like how that has never been his name and yet everybody knows who the fuck you mean instantly.”

He pulled his bedroom door closed.

Heart thundering in his ears, Ichigo stared at his own hand on the door handle. Was there really – no. A hallucination. Maybe Gamuza had kicked a piece of rebar in his direction on accident and now he was in a coma or something. They were rushing him to the hospital right now. Desperate to save him before his brains leaked all the way out. Yeah, that sounded better.

He pushed his door open again, just a crack.

“You close that in my face again and we’re gonna have a problem,” notorious supervillain Pantera mused, propped up on one elbow on Ichigo’s bed.

Heads up, this is a teaser. I love the premises but I don’t have a solid plot down yet and might never find one; all I have for sure is what I posted here. It might stay unfinished forever and ever and ever. Fair warning.

“Are you flirting with me Kurosaki?”

“What? You wish that idiot”

I think that everyone gets annoyed of these two, like Rukia or Renji shouting: “again, Get a room, geez!”

Hello all! Good news and bad news! Good news is I have charms and they look great! Bad news is that the design sizes are visually off.

There was mis-communication, and long story short, I can’t do anything about the size. They’re both technically the same size, but the design was rotated. (Grimm’s taller in canon, I can larp it was intentional to make myself feel better)

If this size difference is acceptable to you, contact me with your Order # and the go-ahead to proceed, and I’ll try to ship by Sat! (03-14-20) If you’d like a refund, please let me know!

I CANNOT SHIP UNTIL I HEAR FROM YOU!

Thank you for understanding! (If you’re waiting on pin preorders, I’ll still be holding your order until I recieve them) I’m quick to respond to email, discord, and twitter!

Thank you all so much for your patience, as always! 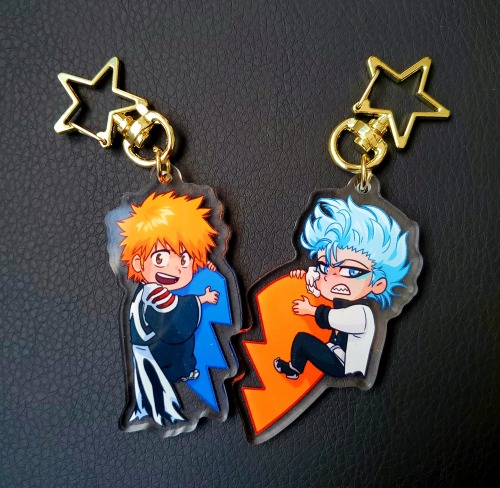 Someone tell him to stop bullying Ichigo

Freedom, fingers, and fights. Ichigo feels it all coming to a finale. 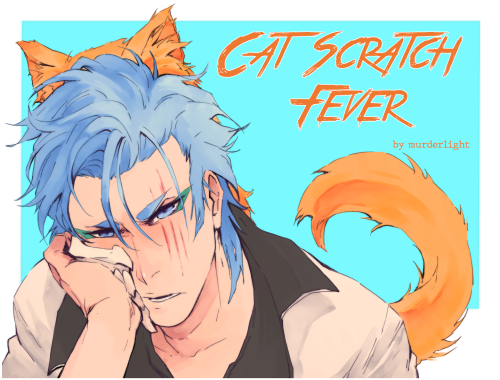 #grimmichi, #murderwrites, #cat scratch fever
116 notes · See All
rayshippouuchihaAnswer
rmf! grimmjow referring to the twins are the murder kittens, karin doesn't know if she should stab him on principle while yuzu is just like o7o

Grimmjow: *choked up* s-shut up

I realized I’ve never shared the art I’ve commissioned from @vani-e ! They’re such a wonderful artist and super nice. Please give them some support if you don’t already! They deserve it 😌