I just miss them every single day of my life 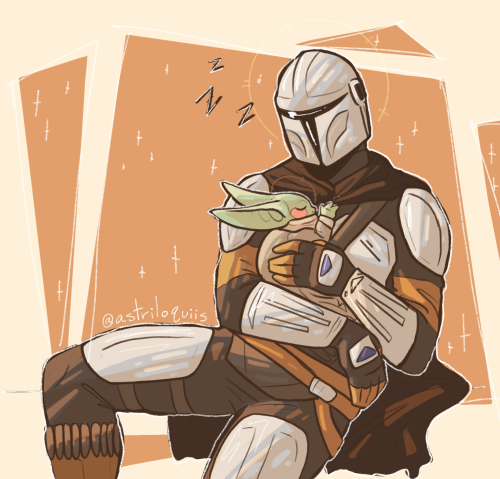 Din: In the accordance with all federal and state wildlife regulations, no frogs were harmed during in the making of this show.

Frog: No! He’s gonna eat me! *hopping away from Grogu*

Frog: Somebody help me! He’s gonna eat me! [Chomps]

Honestly, it could’ve been! It makes me laugh every time Grogu looks at Din like “Is it your turn now?” 😭

A part the ‘what he would’ve wanted’ wip I’m working on rn because this chapter is taking a while and I need to feed the wolves. See if you can guess what’s going on!

He didn’t know what he was expecting, couldn’t understand how he hoped for the same mechanic that had helped his buir all that while ago. What, that after all this time she’d not only still be here, but would also be in the hanger his teacher had chosen at random?

Please. He remembered how the other Younglings would hate it if a story melded perfectly for the character’s usage. ‘He has stupid plot armour!’ they’d cry out. ‘It makes no sense!’

Fool him twice for thinking he had plot armour.

I just thought it was funny :)

Boba: Hey, this shit says that we can fly just by thinking of happy thoughts. Let’s do it.

Boba: Maybe we’re not thinking of happy thoughts. What did you think about?

Din: Grogu holding my finger, and Luke holding me from behind while I’m cooking.

Boba: Damn man… I thought about Bo-Katan dying, but a hot twink holding me from behind sounds so much better.

Din: Are you talking about my Luke?

Boba: I promise, I hate your boyfriend, I swear Din, I swear…

Yes, there is! I don’t have the screencap on me right now, but if you look in Chapter 13 when Grogu sits on the ramp of the Crest, you can see the feet have been sewn. 🥺

Grogu: Wake up! Wake up! It’s morning, it’s time to start the day. I’m so excited!

Din: I’m getting up, just hold for a second, Grogu.

Watch “THIS Comic Could Reveal Important Details of Grogu’s Backstory! [The Mandalorian Season 3]” on YouTube

This is really interesting

Modern Fantasy!AU a little bit inspired by Matthew Swift Series by Kate Griffin, but it is not necessary to read the books.

In a modern world there’s a well known fact that magic exists: it’s just not for everyone. Typical modern!fantasy or something of this sort.

Din is one of the sorcerers that take their power from the cities. That means he is the most powerful when he is in the biggest city in the world, but that can be deceiving and if you don’t have a good grip on your magic, the city’s magic can drive you mad or you just get lost in the feeling of it. Similar to that druids take their power from nature, and warlocks are all about controlling raw power with some sort of instrument - wand, sword, phone, whatever.

He is just making his way through the world, doing some odd jobs here and there, still working for the Covert. The thing with saving Grogu still happens during the job he takes form some shady druids/sorcerers, and he is looking around and trying to find something about his newly acquired son. The thing is that nobody is really sure what he is, exactly, but he feels kind of like a familiar spirit?

Familiars are spirits that can form a contract with any user of the magic if they want to and help them during their stay on earth. It’s a two way exchange: the mage gets to keep their magic more powerful and can do things that they couldn’t before, and spirits can spend their time on the surface and shone their skills and prowess as well; the terms of the contract are negotiated, but those are more common ones. Most of the magic users get them at the end of their training when their magic is more controlled and mature enough to form that kind of commitment.

Familiars are often spirits, but can also take the form of an animal guide, or any other supernatural being. You can also summon pixies or gnomes but they tend to be a little bit whimsical and not easy to be around for someone with weak will. Demons are also an option, but they are simply too powerful for a human to bind them together with a contract.

But Din was never able to summon anything. His magic always burned out all of the summoning circles and he just made peace with it, even if he always felt a bit of a tug during his tires. Not really a good thing for his self-esteem, even if he was considered one of the most powerful sorcerers out there.

And Grogu happens. Din wants to help the child to find his way home, so he is searching the world with the purpose of finding a way to do that. Not helping that some strong shadow-creatures began to follow them and attack at any given opportunity. So, even if in the past he couldn’t draw out anything from the summoning circle, he began to experiment a little with the basics of the whole ordeal and…

He summons one. Din isn’t sure what he summons, this sprint not really looking like any other he saw, but Luke seems friendly enough. And Grogu seems to like him, which is enough of a confirmation for Din.

Din takes the opportunity he has and asks the spirit to take a contract with him. He is his first successful summon and he was kind of hoping that someday this would happen. He is not taking any chances at all. Luke seems powerful enough, and maybe he could help him with taking care of Grogu and figuring the whole situation surrounding the child?

Luke seems flustered but he readily accepts and only asks for “a little bit of your time” in the contract which, weird, but Din’s not gonna look too much into it. They even get to kiss a little, because according to Luke: “in my hometown we seal it with a kiss”. Din is not blind and he can see that Luke is handsome, so one kiss doesn’t kill anybody.

They make their way and try to find some safe place to train Grogu in his abilities, because that’s the only way to help him cross to the supernatural realm. Din’s not really sure he wants to say goodbye to his son, but he also wants him to be able to protect himself and to have a choice in the future. He does what he can best: takes care of him, loves him and helps Luke with training him.

And Luke. The thing is that Luke is powerful. They run into more shadows and Luke takes them down without sweating even a little and Din may be a little bit in love. Yes, he may be a little bit of a goof, but is also very caring and protective and has anyone seen his arms? Have you seen his laser sword? Din is very confused and not sure what to do with the fact that he is falling for his familiar. He has never heard of something like that happening but he also never saw somebody like Luke being a part of a contract. He never goes back to the supernatural realm, never asks for anything just… likes to spend time with them and is a bit touchy.

Next time they are in a bigger city, Din goes around searching for answers. He finds some other sorcerer and is planning to talk with their familiar, but… they seem to be scared of him? Even their mage is surprised, not really knowing why their familiar is acting this way. Din comes back with more questions and no answers. He doesn’t feel that he really needs to worry about Luke and he is sure that his feelings are soon to pass, so he leaves that topic as it is.

Of course nothing good lasts forever.

With the next attack of shadows comes Moff Gideon, one of the corrupted mages that use their connection to the supernatural as a way to grow unnaturally strong. They kill others and take their familiars and use their blood for injections for themselves or their own familiars, which resulted in some mutations: shadows and monsters. They started trying to summon more powerful creatures but demons aren’t stupid and only one summon was successful: Grogu. They took advantage of his young age and summoned him with lies. Everything was going great for them until the child escaped and then some Mandalorian sorcerer stole it from them.

Din is angry when he learns about the pain his son has been through.

But Luke is furious. He unleashes his power on them, and is showing all his true battle glory. He is merciless but not cruel, and soon enough everyone is either dead or trying to escape out of fear. He is the most beautiful thing Din has ever seen.

Din and Moff still can have their duel which resulted in Din getting the Darksaber, the legendary weapon of the only known half-mage, half-demon.

Luke announces that if anybody ever tries to hurt or take away from him his husband or their child, he will show no mercy and leave the world burning for years. Has nobody seen the mark he put on Din as a claim and a warning to others?

That’s the point where Din learns that he accidentally married the Demon Prince and is okay with that.

#dinluke#skydalorian#luke skywalker#din djarn#grogu djarin#mandalorian#the mandalorian#i love any fantasy setting so i was thinking a lot about this#familiars were scared of luke's mark on din if i was not clear about that#sometimes i take a shower and start to think of the ways i can get them to be a family#my bullshit#they are in love your honor#fic ideas
75 notes
autumnwoodsdreamer
Text
Lift a Sail - Chapter 7 - AutumnWoodsDreamer - The Mandalorian (TV) [Archive of Our Own]
An Archive of Our Own, a project of the Organization for Transformative Works
archiveofourown.org

SUMMARY: Mando is left alone with his emotions, and he realizes he regrets what he should’ve done.

A quiet night sky hung over you, the light breeze blowing across your face as you stared beyond into the lake ahead of you. The large moon reflected blissfully off the tranquil waters, stars glistening through the foggy clouds that surrounded them. You rested silently in the grass, enveloping yourself in the serenity to calm your stress after the long, tiring day training the villagers. Already it had been several rotations since the villagers had commenced their training, and the day your attack on the raiders neared rapidly. You had to admit you were feeling quite anxious about it already. There were a million things that could go wrong, yet you could only train the villagers the best you could in hopes of defeating these invaders.

I think so too! Though I would love the idea of Din having a singular son/charge, i’m more inclined towards your explanation, especially considering just what Mandalorian customs are like.

HE TOTALLY COULD’VE I—🥺🥺🥺 HELP