Maia: Hermes’s mom! Orpheus thinks of Hermes as a father figure, and so she’s a little like a grandma to him. I don’t know much about her mythology-wise, so I can’t really say too much about her in the HTCU apart from that, sorry!

Cause here’s the thing

Hermes: Uhm, I’m not sure how to tell you this Jean, but Hermes is definitely already there…

Hera: Zeus’s long-suffering wife, and Hades and Persephone’s sister in law. She and Zeus have 4 kids, and Athena is her stepdaughter. She… is not the nicest, especially to Persephone, but she has been through a lot, so Seph always cuts her a little slack. A little.

Hephaestus: Zeus and Hera’s son, and Hades and Persephone’s nephew. He’s a hella good craftsman, and he’s very close with his uncle Hades. His relationship with his parents is… iffy, though.

Thanatos: Hades’s other right hand. He’s the factory foreman, and Hades really couldn’t do without him. He’s also absolutely brilliant at his job, except for this one asshole named Sisyphus, but that’s another story! He doesn’t talk much and he’s kind of an edgelord, but it’s rumored that he has a soft spot for Hades’s daughter Macaria :-)

Athena: Zeus’s child with his first wife, and by extension Hades and Persephone’s niece. She’s a brilliant strategist and works for the military. Whenever she sees Hades they play chess. She always wins.

Hestia: She’s an innkeeper and a friend of Hermes’s. She seems very sweet (and she is!) but she has a wicked sense of humor. Orpheus loves her.

Artemis: Another one of Hades’s nieces. She’s brilliant like Athena, but a bit of a rebel as well. She’s at the bar a lot, so she knows Orpheus pretty well. He’s straight-up terrified of her though!

#Soph’s askbox#hadestown#emily 2.0#when I made this ask game I was honestly thinking people the characters knew in the myths#like the argonauts or Minthe#but this is really cool!#this is all gonna fit into the HTCU at some point too!#HTCU
3 notes
flowers-inthepieshop
Answer

Minos: He’s the mayor of a town called Crete near where Orpheus and Eurydice live. His wife is… let’s say she’s very well known around those parts. You know, for the uh, bull thing. Eurydice read about it in the newspaper, but she didn’t believe it was anything more than a joke. It was not a joke.

THANKS SO MUCH FOR THE ASK ELISE! Let’s be honest I had absolutely no idea what to do for Medusa, so have fun with the other 3.

Zeus: Hades’s youngest brother. He’s a big-shot politician with an absolutely INSANE family life (4 kids with his current wife, 1 with his first wife, and 3 acknowledged illegitimate kids) to say the least. Hades doesn’t see him all that much, but he and Seph are constantly making fun of him, for obvious reasons.

Poseidon: Hades and Zeus’s middle brother. He also runs a factory. His family is… less weird than Zeus’s, I’ll give him that. He and Hades are a little closer in age, plus they have business interests in common, so they see each other a lot more often.

Hecate: One of Hades’s right hands in the factory. She handles the finances. Nobody really knows a lot about her, and she’s a little scary, but she does her job well so Hades tries not to look into her too much.

They are my ENEMY and they are STINKY and I bet they wear socks to bed like the skinny piece of celery they are.

I can’t even explain the pain of knowing that Hadestown was on at the national theatre, LESS THAN AN HOUR FROM MY HOUSE and I didn’t know it was amazing so I DIDNT GO!

The biggest crimes in 2010s musical history are 1) the lack of any visual recording of the 2016 Hadestown off-Broadway production (I would pay for a legal recording so bad I really would) and 2) the fact that Everyone’s Connected and The Sound of Going Round in Circles were cut from the official soundtrack to Broadway’s Amelie production.

DO YOU KNOW WHAT IT’S LIKE BEING REALLY INTO MUSICALS WITH ABSOLUTELY NO MUSICAL TALENT?????

#hey mom#if you want me to cook dinner you better put up with my bullshit#i wish i could sing :(((((((#does it stop me from singing constantly#fuck no#musicals#les miserables#hadestown#wicked#hamilton#newsies#waitress#grease
15 notes
helentsblog
Text

Part 10! I have school again, but I’m seriously tired of pushing my homework boulder up the hill, only to watch it crash down again when I get new assignments the next week, so I’ll take some solace in staying up far too late to write this.

Last time on this AU: Hades watches his kingdom slip out of his fingertips. He desperately attempts to find some way to keep his grip on what should be his. Persephone determines that it may come down to her to protect Orpheus (and the rest of the world) from Hades, no matter what that means for her. Hermes and Eurydice devise a plan to protect their favorite poet. Patroclus wishes he’d gotten a chance taken his chance to kick Apollo for guiding Hector to kill him. (‘My foot was this close to his face, Achilles!’) Dionysus listens to his mother. Hyacinthus and Orpheus sleep through the train ride home.

“What did they do to him?” She asks quietly.

“You really want to know that?”

She considers for a moment. “Yes. He’ll need me.”

“He stopped breathing when you crossed the Styx, didn’t he?” Hermes asks, avoiding her request.

Eurydice turns away from his gaze. “It wasn’t really him. I walked all that way. And it was just a diversion.”

“Not a diversion,” he tells her. “Protection. An extra shot at making it out of here. The god of death’s blessing. Thanatos couldn’t bear to give him to Hades. Orpheus was never really a shade. Only in part. When he reaches the surface, it won’t be so hard on him.”

“I was a shade. What will happen to me?”

“It’ll be harder to get used to the surface,” he says. “You’ve noticed it already, I bet. It’s strange, isn’t it, to need to sleep so much?”

She shrugs. “A little. There’s gotta be more to it than a little fatigue.”

“Not physically. It’s a different kind of protection. Because he wasn’t a shade, Orpheus couldn’t have signed Hades’s contracts. He’s under his own jurisdiction. Hades won’t be able to argue that he belongs to the underworld.”

“Will that stop Hades?” She wonders aloud.

“No, but it will weaken his argument. And I assure you, there will be an argument. It’s you I’m worried about, Eurydice,” he says.

“Orpheus, by extension, then. If I know a thing about that poet of mine, he’d do it all again if Hades takes me.”

“Yes, he would,” Hermes sighs. “Which is why we need to prevent the possibility.”

“How would we go about that? Us against… Hades? Maybe Zeus?”

“I have an idea, but you’re not going to like it.”

“I agree. But his song could sway opinions.”

“Not enough,” she responds.

“What are you saying? We barely escaped!”

“Hades let us go. When I found him…” Hermes glances at Orpheus, sound asleep. “His cell was unlocked. He wasn’t chained up. Hades wanted us to escape. We met no confrontation leaving the city.”

He nods. “I’m sure of it. If Orpheus can convince Hades to let him go once, he’ll do it again.”

“And how would we ask him to do that? After all of this, he’ll be back to work on his song all over again?”

“We tell him the truth.”

“Tell me the truth, Hermes. What the hell did they do to him?” she asks again. “If this really is our only choice, I at least want to know how to support him.”

“The cell was pitch-dark,” he tells her. “The ground… Eurydice, are you-”

“Please. I want to know what he went though.”

He sighs and continues. “The ground was covered in pictures. Drawn in his own blood or carved into the stone. Your name beside his. The notes to his song, scratched out like he wanted to forget it.”

Eurydice watches her lover, his chest slowly rising and falling. He looks peaceful. How had it been just this morning that he’d been suffering like that?

“I don’t think he slept much. He could hear the other prisoners through the walls, I’m sure.” Eurydice lays the palm of her hand against his forehead. He smiles slightly in his sleep. “I doubt they gave him food or drink. He weighed almost nothing when I carried him out of there. They’d torn off his bandages and left him to bleed. He’d given up. I found him leaned up against a wall, hardly strong enough to lift his head. He thought it was over.”

“I’m sorry, love,” she whispers. She feels his warm breath against her cheeks. “We’re never letting that happen again.”

“No matter what it takes,” Hermes promises, “Hades will never lay a finger on him again. I swear.”

Hades lays awake, prevented from rest by the shouts of his workers. The barricade holds, but he can smell fire from outside his doors. How long before he’s forced to flee? Where would he run? Demeter would never let him touch the surface world. Hermes had taken the train. That leaves him with one option. He almost wishes he hadn’t thought of the possibility. Olympus.

Zeus would find it hilarious. The king of the underworld, forced into exile by his own workers. He’d be the laughing stock of the family. Still, it was better than whatever Hadestown had in store for him and it was preferable to Demeter’s wrath. With a little luck, Zeus might even help him keep him kingdom. If fortune wasn’t on his side, bribes would suffice.

A sudden shatter of glass pulls Hades from his planning. The barricade goes up in flames. His door rattles. Hades rushes to the window. It’s only a few floors down to the ground. He kicks out the glass and jumps. His divine legs catch him better than a mortal’s could. He lands with a roll.

And so he runs.

Realatively short part! Sorry, not a lot to say while Orpheus naps.

I’m gonna listen to the Hadestown soundtrack for the first time because I heard people really like the musical as a whole, is there anything I should know beforehand??

Click HERE to watch the new episode of Bull that features Amber Gray, our lovely Persephone in Hadestown. I know the link works in the US but I am not sure for outside of it. 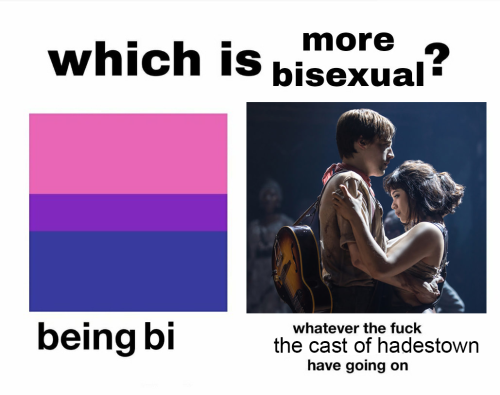 i am once again asking for a girlfriend

see how the world could be—
—in spite of the way that it is. 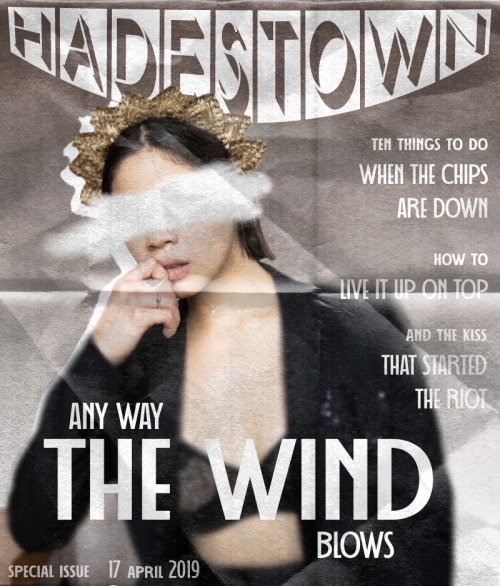