it was nice to be happy… for a while

Never Leave Your Side

A/N: every handers writer must write at least one fic featuring anders wrecked with guilt post-kirkwall and hawke comforting him with the unbridled all-encompassing love he has reserved for the possessed disaster apostate mage only🥺🥺🥺 hope you enjoy!

Read on AO3 or below the cut!

(You are a mistake.)

Anders stared at the burning beacon that was Kirkwall fading in the distance, clouded in smoke. A view he never thought he’d get to see—in these circumstances, at least, in this company. With Hawke standing right there beside him, one arm thrown around Anders’ shoulders. A comforting, if solemn presence. Warm, despite the chilly silence hanging over them. Close, despite the widening divide of lies Anders had carved between them.

When the gauntlet splits his skin open with a sharp edge; when his tendon is squeezed so hard it could crack like an egg should he breathe in too deep; when the sun dims and his eyes see naught but red and black - still there is a spark of… musing. Musing at how he always thought he’d die. With a sigh of relief. Knowing he won’t hurt anyone again, knowing he won’t hurt again, knowing he doesn’t have to pretend this kind of life has meaning.

He never thought of the anger. The flame licking his lungs, the agony of steel against his throat, every muscle and bone roaring for destruction - for he is not done yet, he’s not had enough, he never will.

Summary: Fenris is a vampire on the run from his former master. He finds himself in Kirkwall, where one night he encounters Marian Hawke: the city’s resident vampire hunter. Naturally, she tries to kill him. Luckily for both of them, she fails at that and Fenris, rather than killing her, makes his escape. A week or so later, Marian surprises everyone involved by tracking him down and, instead of trying for round two, offers to recruit him into her group of monster-fighting misfits.

Skip forward a bit and Marian’s absentee brother Garrett has become suspiciously less absent ever since meeting the group’s rebel mage healer, Anders, and agreeing to help him locate someone from his past. Then Marian strikes up a deal with Fenris that involves working against a powerful Tevinter vampire. Add to that the day-to-day life of a predominantly mage household in a city that really doesn’t like mages, and things sort of spiral out of control from there…

Chapter excerpt: “Don’t you think that putting something off because it feels like it’s too soon, or because it’s what’s expected starts to seem a bit silly when you think of how things could have gone worse tonight? Sorry, I know you didn’t want to talk about that. I probably shouldn’t bring it up. But… don’t you think it’s true? If you weren’t ready it would be another thing… but you don’t look at him like you’re not ready.”

#it took a bit longer than i meant it to#but still a pretty quick update!#i want to put the next part of this up soon too#handers#fenhawke#da2 vampire au#dragon age fanfic
8 notes
storywestistrash
Answer

dragoned rage. 4am. me. you. and the world laid out in front of us. nothing is in our way 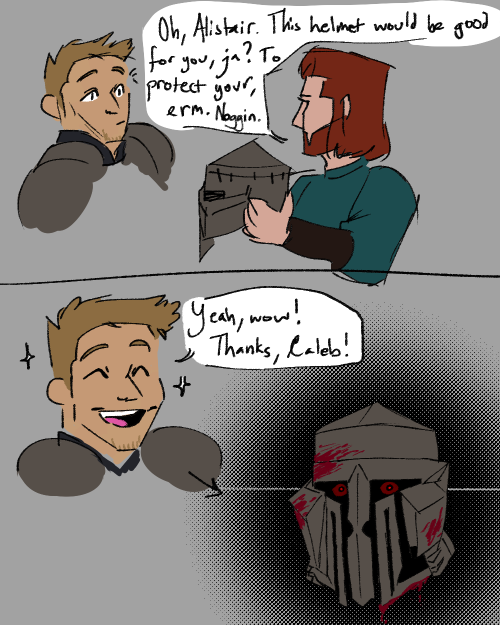 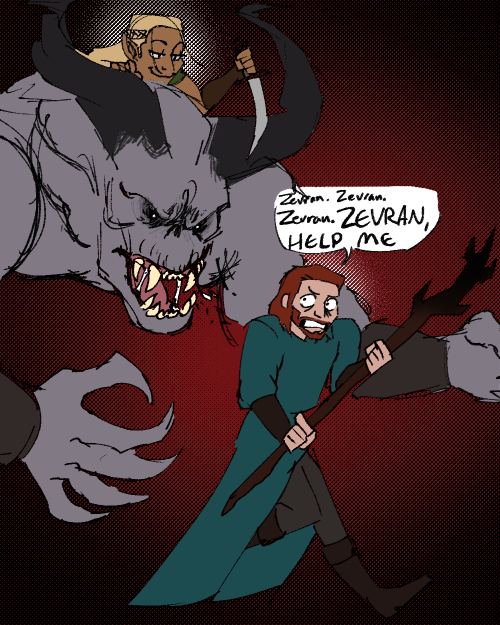 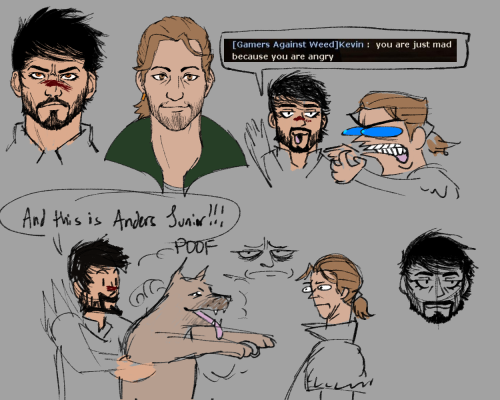 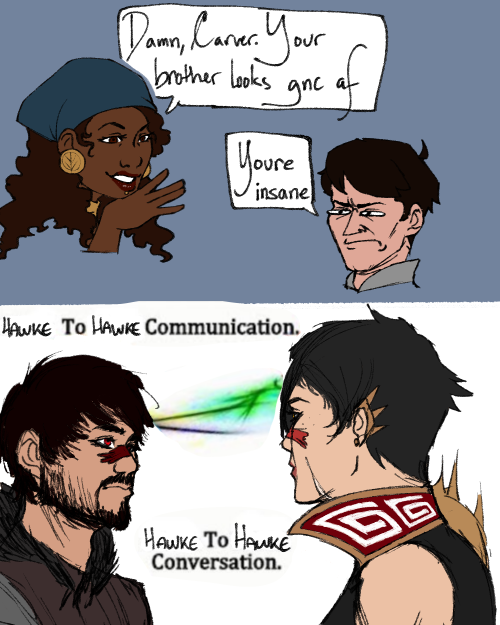 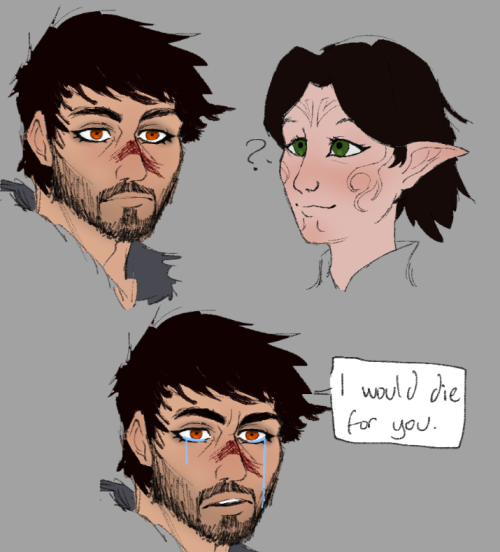 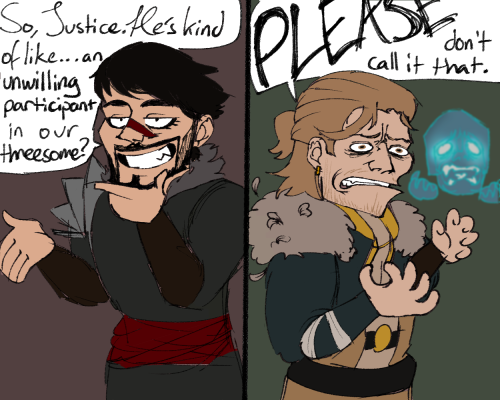 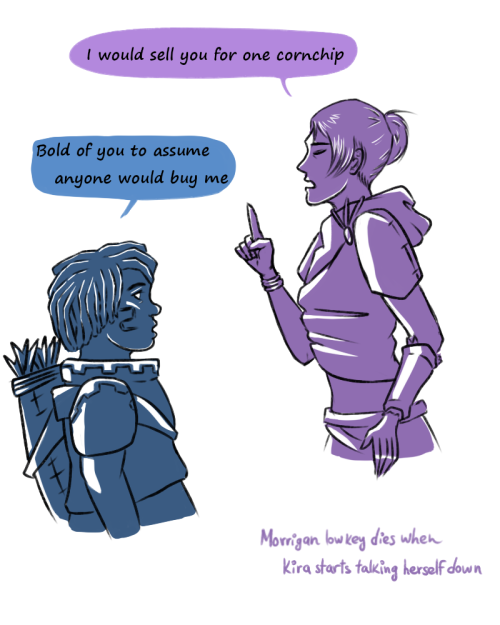 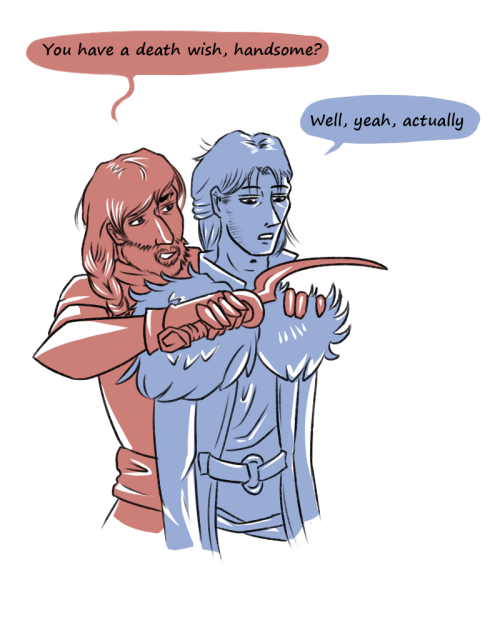 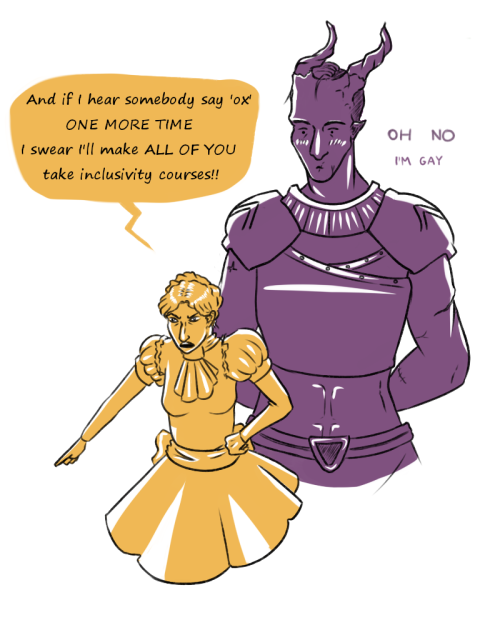 Anders’ vibes are way more Yandere than people give him credit for.

If love is the answer

daft punk just announced their split up. I’ve been listening to « Touch » all evening so my sick brain found it an excuse for more handers nonsense 🤭 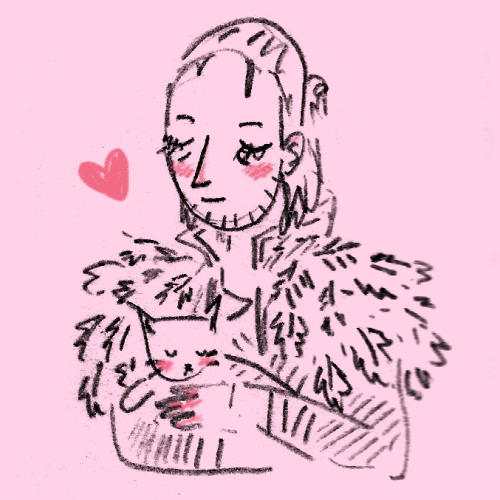 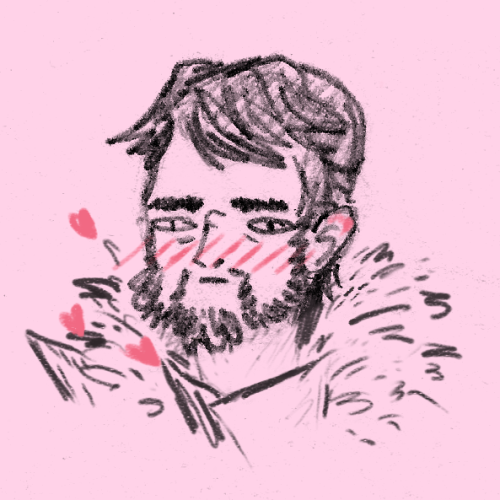 even though the fic’s been done for years, I still think about hawke and anders in my stripper AU. just little things like hawke getting in shipments of expensive wines and champagnes for the VIP room, throwing out a rowdy party, zevran and co taking anders shopping for new sparkly show clothes, sharing wild stripper stories together and laughing about it 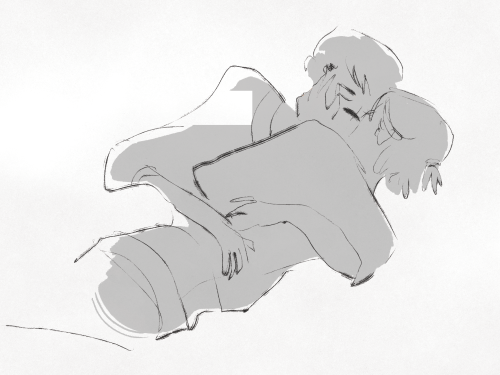 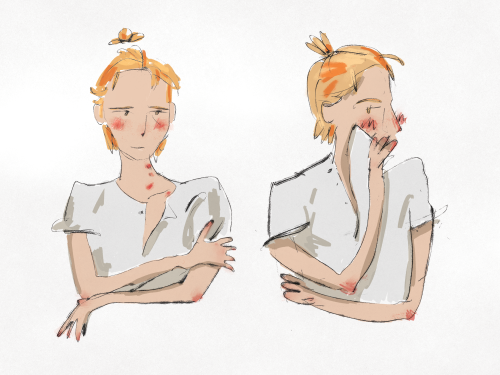 “help me collect ingredients that’ll lead to a war uwu 👉👈”

A kiss stole the rest of Hawke’s breath away, and he lost himself in it, in the bruising grip of Anders’ hands as he was pressed harder against the wall, surrounded by the familiar scent of fresh elfroot and lyrium—the sharp heady tang of the air after a lightning strike. Desire coursed through him and Hawke grew dizzy with it, drawing Anders close and wrapping his legs around his waist. Anders’ thick length pressed against his ass, hard and insistent, and he captured every one of Hawke’s ragged moans and whimpers with his mouth.

“Anders,” Hawke moaned against his lips, “Anders, I need—“

"Now?” Anders’ gaze was molten fire, his skin scorching heat where it was pressed against Hawke’s.

So I saw Anders’ rival romance in act 3 when he asks you for help to collect the ingredients to blow up the chantry, AS A FINAL RESORT. Let’s be clear, he could have done it long before but it was literally the last option when Meredith refused to listen to reason.

If he’s rivaled, then you can sway him towards a peaceful path. Which is just making him realise that he doesn’t have to kill people to get justice or to get help for the mages.

My problem was, that even after everything mages have suffered, they are still expected to keep a level head and look for peaceful options.. how come you don’t say that to Meredith?

It didn’t sit right that you can guilt trip Anders into thinking he had lost control. Because when you do this, justice comes out and stops Anders from doing anything to stop the explosion.

Felt weird that Hawke can still preach to the victimised party and expect them to give up their weapons but not the party that actually does the awful things. I’m not saying violence is the only answer but that Anders shouldn’t have to be made feel bad for something he was willing to risk his life for.

The depths of this game.. just insanely good. 🥺