prompt: “The last time i was in a toy shop like this i was one of santas elves”

I walked down the corridor of the mall hand in hand with hank. It had taken everything in me to actually get him here but I had managed to convince him we needed to go Christmas shopping, rather than just making people things. He hated it.

I said, pointing to a shop window down the way. The front window was full of lights and trees and fake snow. It looked magical. As I looked to him with the widest smile of wonderment he looked worried.

He asked and I nodded quickly, tightening my grip on his hand and pulling him forward.

I said proudly, dragging him quickly along. When we reached the window my eyes got wide. It was so much prettier up close.

I said excitedly, pointing to the horse draw carriage towards the back. I looked up to hank who had his brows drawn. He was inspecting the whole winter wonderland intently, trying to figure it out. at least thats what it seemed like.

“Who has the time to do all of this?”

He asked and I laughed. so i was right, he had no idea what was going on here.

“Hank they hire special people to come do this every year, it takes like a month to set up.”

I said and he sent me a look of bewilderment.

He asked and I nodded.

“Yeah, clearly you don’t get out much.”

I said and he shook his head. I began pulling him into the store, inhaling deeply the scent of cinnamon and pine.

“I don’t ever have an excuse to leave the mansion on regular circumstances.”

I raised a brow at him, guiding him around the aisles.

I said, rounding a corner.

“What’s that supposed to mean?”

He asked and I sent him an amused look.

“like, I get we don’t have an excuse to visit the real world, and The last time i was in a toy shop like this i was one of Santa’s elves, but you could at least make a point to go out every once in a while. Ya know, get some of the culture of the outside world.”

He held up his free hand, stopping us from getting closer to the other Christmas display.

“Hold up, we are not just gonna grace over that thing that just came out of your mouth are we?”

I shrugged, tugging at his hand.

I asked innocently, stepping closer to the winter wonderland in the middle of the store. I could already see the line of kids waiting to see Santa.

“You were a Christmas elf?”

He asked amused and I sent him a nervous smile.

“Hey, a job is still a job, no matter how ridiculous.”

I said, stopping in my tracks and smiling widely. It was just like i remembered it as a kid.

He said confused, stopping too and looking down at me a little clueless. I looked up at him, pointing to the people handing out candy canes.

“You can’t tell me that doesn’t look like the most cheerful thing ever.”

He drew his brows and I frowned.

“Come on, You’re a teacher hank! There’s nothing more rewarding than seeing the look on a kids face when they’re excited about something.”

“Yeah I guess, but we’re not talking about academics here.”

I sent him a look.

“Trust me, the pure joy of a kids face when they see Santa for the first time is worth the scratchy outfit and long mall hours.”

He laughed a little bit, shaking his head as I pulled him along again.

“Where are you taking me now?”

He asked and I sent him a knowing look. his face fell.

He said and I stopped, standing firmly, now in line.

i said and He sighed.

“There’s no way I can change your mind on this is there?”

He said a little disappointed and I thought for second, an evil grin crossing my features.

I said, laughing at his expression. he was so done with my shit and i knew id get it later at home. not that i was complaining or anything, it would just be an early Christmas present for me. it made me smile, thinking about it until he opened his mouth again, bringing me back to reality.

“Fine, but it had better be worth it.”

he judged. I nodded, pulling him into my side for a hug and looking up at him with a smile.

“It absolutely will be.”

The X-Men are captured by Matsuo, Fenris Twins, Omega Red, Sabrertooth and a brainwashed Psylocke. Gambit and Jubilee are tormented by Sabretooth. 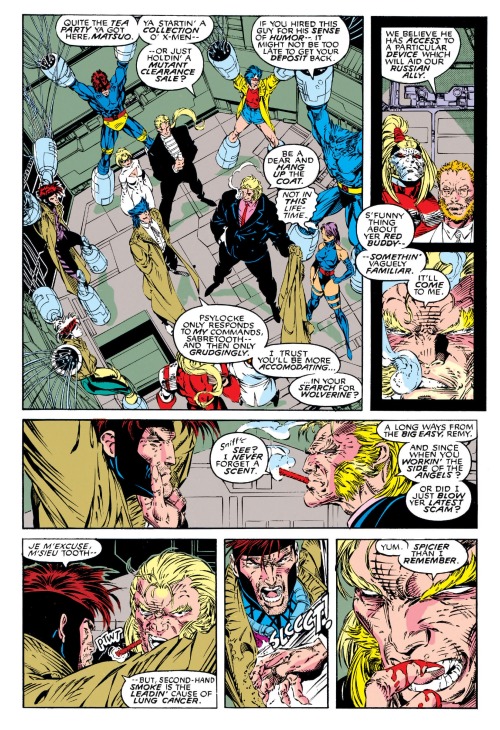 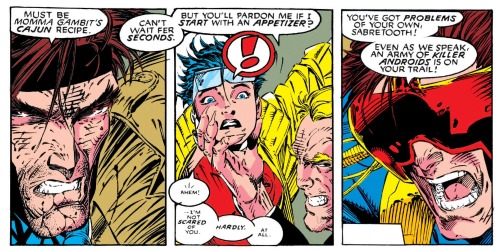 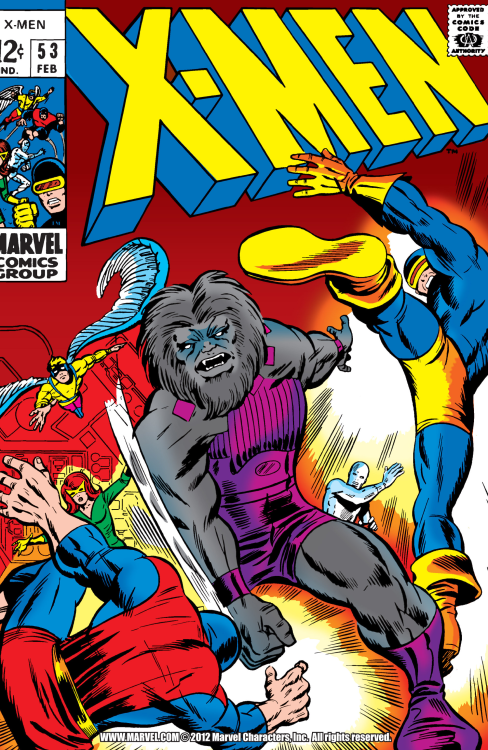 my brain can only process x men movies rn #x men, #x men first class, #charles xavier, #erik lensherr, #raven darkholme, #hank mccoy, #digital art, #fanart, #art
22 notes · See All
static-shockedChat
What your X-Men Crush says about you:
Logan: You have daddy issues
Scott: You desperately want this man to get the therapy he needs.
Jean: You have mommy issues
Ororo: You have a taste for women who are better than you in every conceivable way, and you are aware of this.
Warren: You want sugar, hold the daddy
Kitty: Your type is 'the girl next door'
Rogue: You just want someone who seasons their food
Piotr: You saw the ‘non-threatening’ part of the Himbo description and went nuts huh
Charles: Either you’re in it for James McAvoy or you have a crush on Picard. Both are valid
Hank: You like your men well-read and just on the side of cultured... Or you’re a furry. Maybe both.
Kurt: You have acquired a taste for ✨sexy Catholicism✨
Emma: When you say “step on me mommy”, it’s unironically.
#XMen, #X-Men, #X Men, #In honor of me cracking finals over the skull I'll be putting all of you and myself on blast, #Ororo Munroe, #Hank McCoy, #Kurt Wagner, #Piotr Rasputin, #Scott Summers, #Jean Grey, #Emma Frost, #Rogue, #Logan Howlett, #Charles Xavier, #Kitty Pryde, #Warren Worthington, #I know I left bobby out but tbh a crush on Bobby just means that you're down to clown and down to CLOWN
404 notes · See All
robertiamlegendnevilleText
#beast, #x men, #hank mccoy
6 notes · See All
doesithavetobeaspiderPhoto 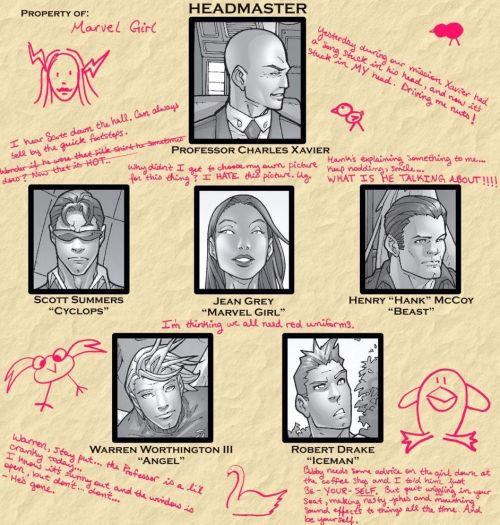 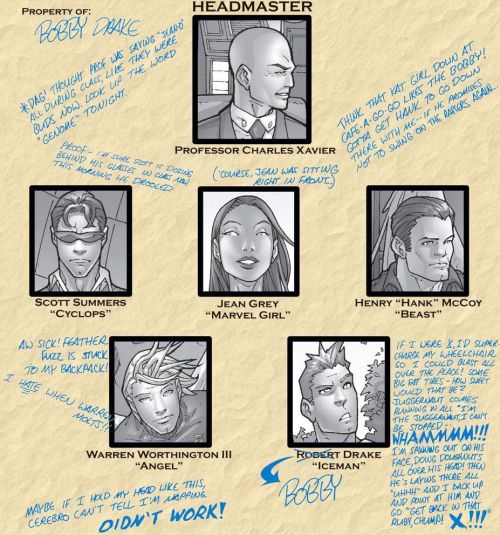 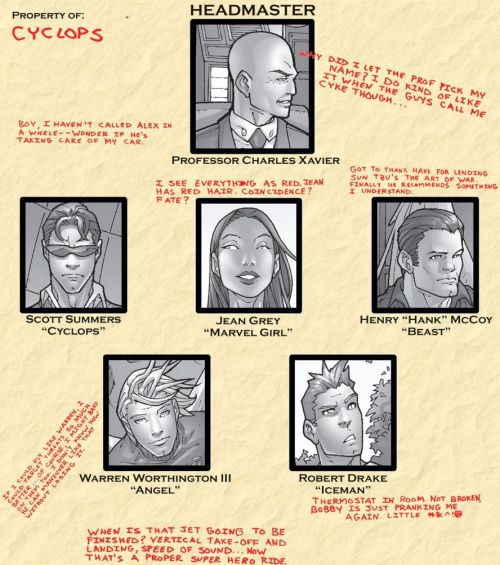 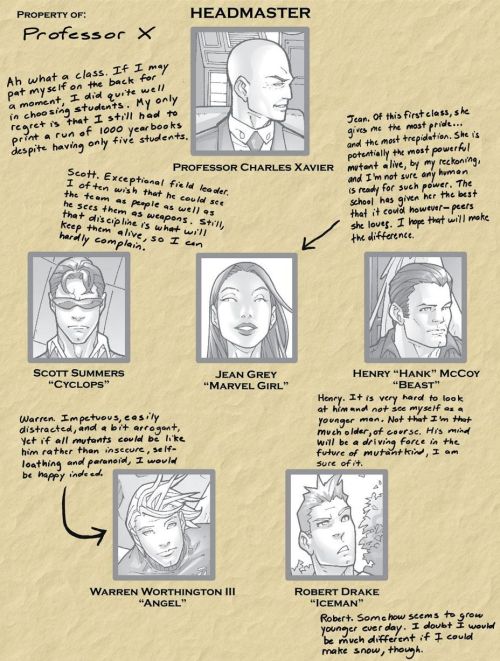 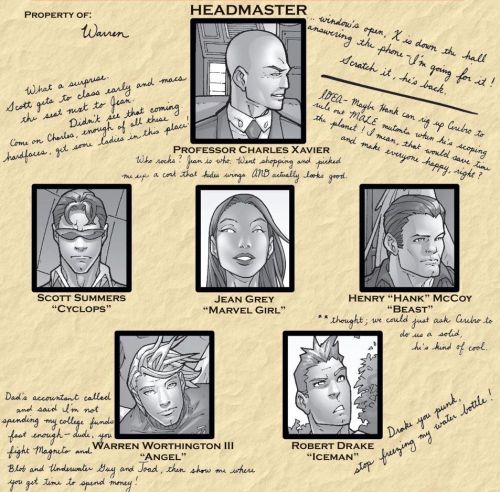 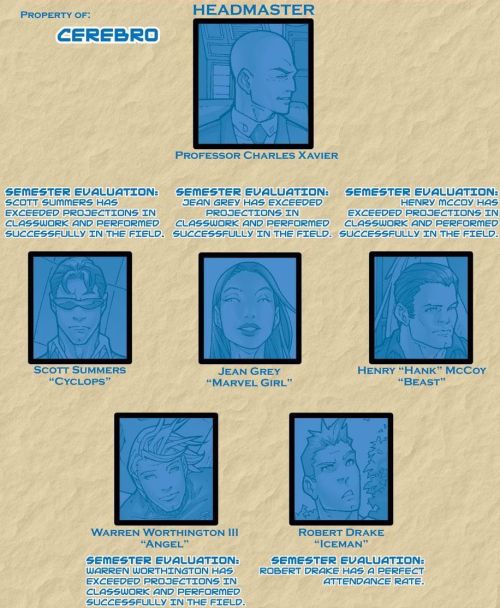 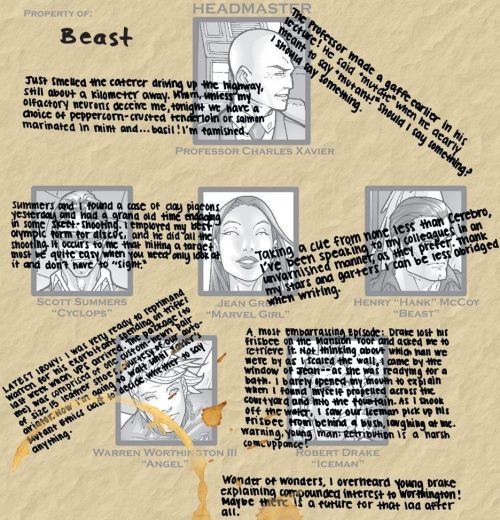 On GOD Jean Grey has so much untapped potential…

The X-Men celebrate thanksgiving with Professor Xavier’s heartwarming speech as well as Scott and Jean’s proposal to marriage.

I miss those days where the X-Men were like a family with pro-mutant human allies. Nowadays, the X-Men (or rather X-People) are a bunch of paramilitary separatist mutants. 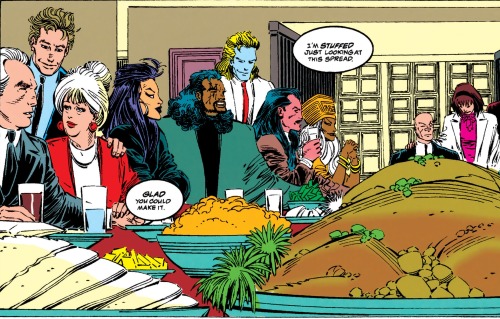 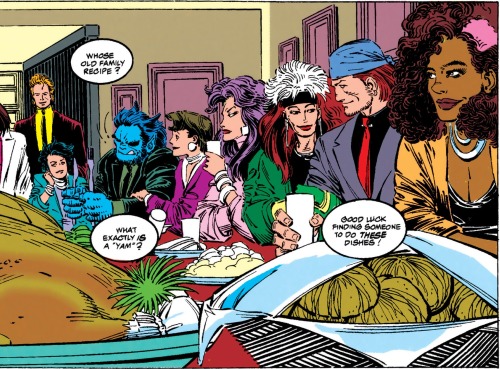 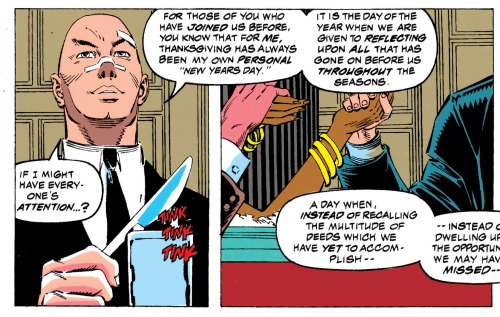 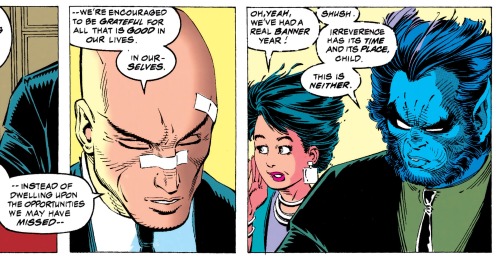 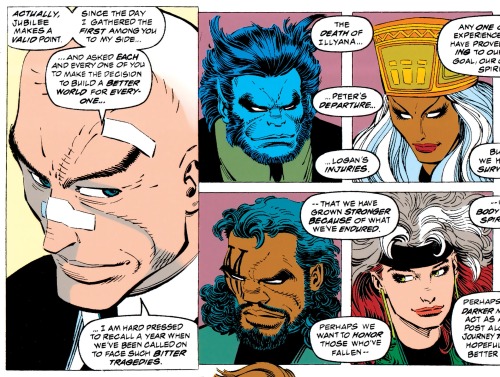 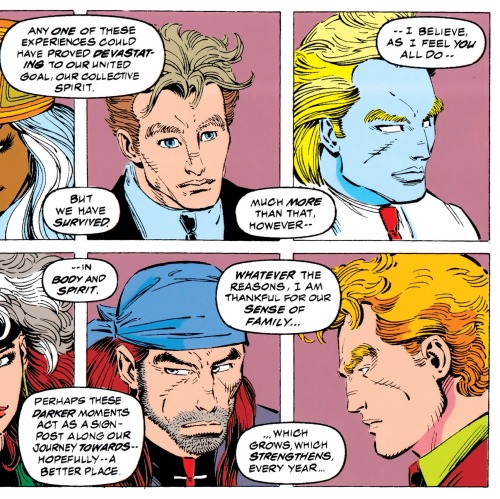 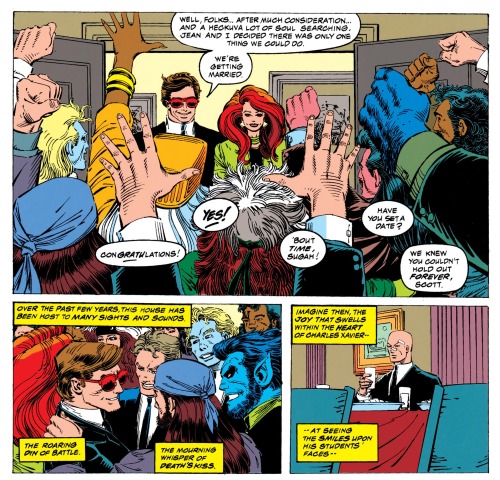 Erik, reading something: “He keeps on using the b word for women and swearing”

Peter and Hank, in unison: Bitch. 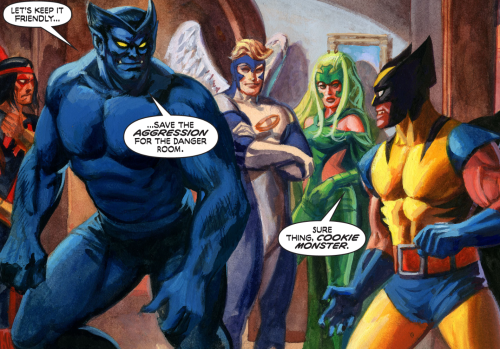 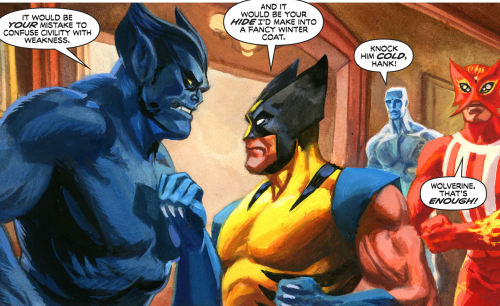 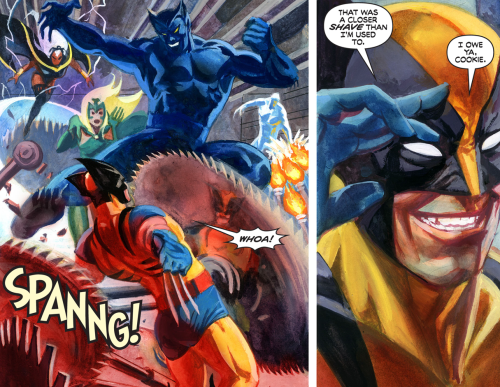 Hank McCoy from the XMCU is Trans!

Honestly, the more striking moment from Amazing Adventures Vol. 2 #11 is this one

(7). Hank is talking about the X-Men in general, not Scott specifically, but it still indicates something about how Hank regards his relationship with Scott as part of that collective if not as an individual. Hank positions the X-Men in this scene as an entity to which he is still accountable. Despite the fact that he had no intention of returning once he left, his reaction to seeing their picture after his transformation is to project his anger at himself onto them. He imagines himself to have wronged them in some way, having corrupted not only his future but their history. Now, it’s fair to say that Hank’s transformation is a moment of intense emotion, and his reactions shouldn’t necessarily be taken at face value. I don’t think he actually believes his former teammates would condemn him for his mistake. And the fact that he’s projecting anger onto them is about his own anger—if he were crying, he would probably project sadness onto them. Still, just because we shouldn’t take his words at face value doesn’t mean they tell us nothing. His lamenting having let them down speaks to him feeling that being a member of the X-Men means being held to a certain standard of behavior and, frankly, an ability to pass as baseline human. Feeling broadly about a group this way also means that, to a certain extent, he feels that obligation to each individual member, including Scott.

- It was four hours ago. 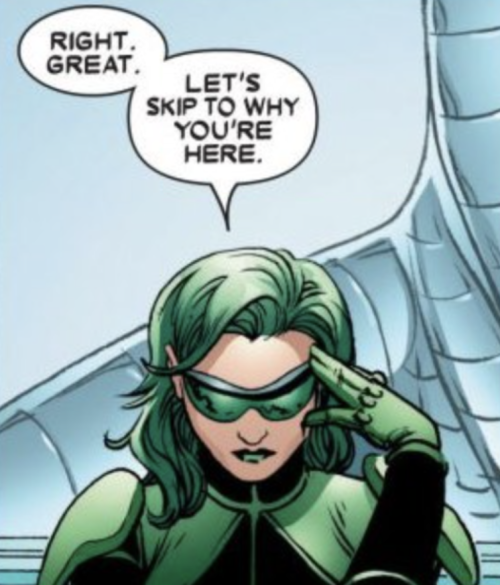