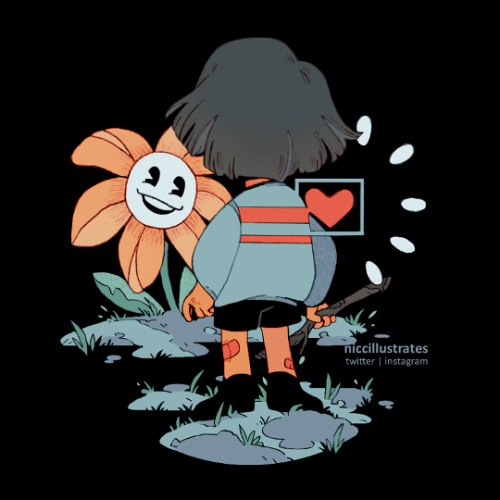 Here’s some context to the old drawing: when undertale came out, I was like,,,, 13 years old I think? And I was going through some kind of an edgy phase, I think. And I knew that there are neutral route, pacifist route and genocide route, and because I was going through an edgy phase, I wanted to do the genocide route first, which I…. kinda did, but at first I almost did a neutral route, but then at some point in Hotland I realized that I was doing it wrong, so I reset. But this sketch I did when I just defeated Undyne (on neutral route), and at this time I was REALLY bad at boss battles, so it took me many tries (not many as Undyne the Undying or Sans, though), so when I did it, I sketched this. Also, the reasons you can see open eyes instead of closed eyes? It more self-inserty at this time, because I did use Rinja as the name in game. But on the redraw I’ve changed them to Frisk 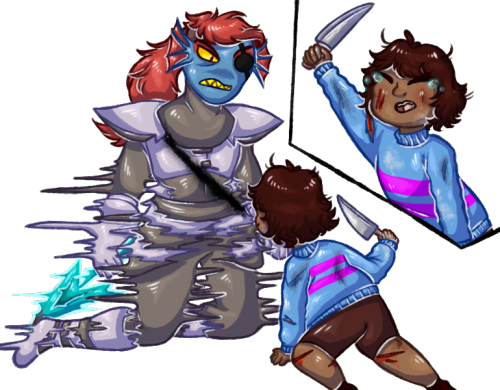 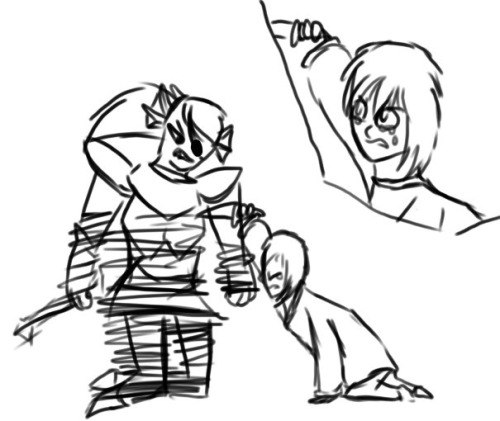 #i'm really happy with how the new one turned out!, #i still have MANY undertale drawings to redraw, #many of them were done during this edgy phase too though djhghd, #guess what got me out of the edgy phase? it was UNDERTALE AS WELL, #when i finally played the pacifist route, #actually playing neutral and genocide was good too for some things, #i mean like. if i didn't then i would still be VERY bad at boss battles in any game, #the reason i can fight hard bosses in video games and not fail 100 times is thanks to undertale, #because like, #i was able to defeat undyne the undying only after like 50 tries. and i was able to defeat sans after 100 OR MORE TRIES, #which took me MANY DAYS, #i feel like this is the reason why am i able to defeat hard hollow knight bosses in like 4 days. it's all thanks to undertale, #(same goes for other games as well), #undertale, #undyne, #frisk, #blood tw, #(not a lot of blood but still)
1 notes · See All
ask-ufpapyrusText

Hi ! ! ! Asks out of nowhere are completely fine ! And this is just ! ! ! So nice and good ? ? ? It made me really really really happy to hear . Undertale playlists on 8tracks in 2015 - 2017 were something I really loved , a big way I enjoyed Undertale fan content , and introduced me to so much music that I love now and basically developed my music taste . I’m just so glad that the playlists that I made could be some of someone else’s favourites , and that they could feel some of the emotions that I felt while making them . And making your whole year ? That’s an incredible compliment and thing to say ! ! ! Thank you ! ! ! ! It’s not a problem and thank you ! ! ! ! I’m so happy and touched that someone found my playlists and liked them that much and that they had such an impact . Thank you sincerely for sending this ask to let me know . I should really find someway to put all my playlists up online in an easy to listen format … I’ll work on it . And seriously ! Thank you ! ! !

#This made me so happy ! ! ! !, #I considered putting my playlists on spotify but didn't because of how you have to listen to a playlist shuffled if you don't have premium, #And the order of the tracks is important to me, #They tell a story !, #Anyways I'll look at spotify again and anything else available, #I also looked at Playmoss and Stayed Up All Night but didn't have the energy to put them all up there, #BUT ANYWAYS, #I will have the energy now ! Because I really like my playlists ! ! !, #I was actually thinking about them before I received this ask and already wanted to post them again ! But now even more !, #I also have some edits I want to make with some of the song choices but they'll mostly stay the same, #Thank you for this wonderful message ! ! !, #I'm so glad my playlists could make someone feel similar to how I did listening to Undertale playlists back in early Undertale days ! ! !, #asks, #annalyz3, #long post /, #text heavy /, #favourite, #save
1 notes · See All
azeriaaPhoto

One of the pic I managed to save!! Because I posted it on discord ahaha but the quality dropped a lot (；~〓~) 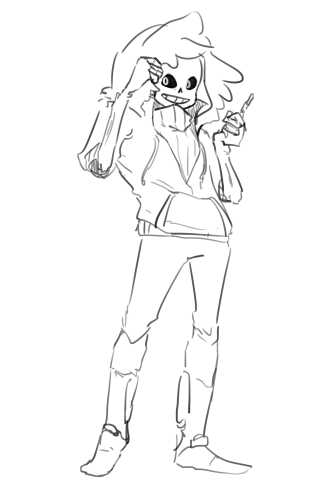 #artzeria, #techy, #sans, #undertale au, #undertale oc, #[HI Thank you all for the kind words h], #[They really make me happy; really], #[i wish to reply to all of them ;;; but there's too many yall are too nice;0;], #[dont worry im saving them up before deleting the post], #[thank you <3 <3 <3], #[I have drawn Techy; Blank; Online; Insans; Lumine and Cyphertale Sans and Paper Crane], #[but whoosh they all gone but it's oka!!! i will redraw them some day], #[paper crane is really good i love paper crane h let baby be happy please]
189 notes · See All
undertalesevText

#i will never stop thinking about undertale, #it makes me too happy to, #ok have a nice day
5 notes · See All
help-im-a-gay-fishText

Yeah so I missed this yesterday but here it is now. I drew it abit quickly so it doesn’t look great. It looks abit like my old style tbh. I’m not sure how that happened. I hope you like it anyway.

Gosh I love Swap Nightmare’s/SD Nightmare’s design so much. The colors are so bright and vivid and gorgeous!¡ I couldn’t find the full body design for the rainbow collar pic, so I just made it similar to the other one

#i hc toriel n napstablook as bi too, #i was just lazy when drawing this so i didn’t fit thhem in haha oops, #technically paps n sans are biromantic bc they’re asexual, #but ANYWAYS, #happy (late) bi visibility day!! yay!!!!, #bi visibilty day, #undertale, #papyrus, #sans, #asgore, #kira’s art, #oh and hey yea, #petition to change asgore’s cape to the bi flag, #that would be so cool
41 notes · See All
Next Page