please like or reblog if u save, don’t repost <3

Dracoron magicians of my Heart 💜 Well I’m alive, he didn’t come back in the night but the landlord and his on call handiman are here fixing and changing the locks and hopefully the window. Maybe this will be the end of it now but I’m not hopeful.

It would have been boring without the lead Potter’s but the Weasleys. 🍁

Holy shit! When and how tf did it even reach 100k?! Feels good tho ಥ‿ಥ 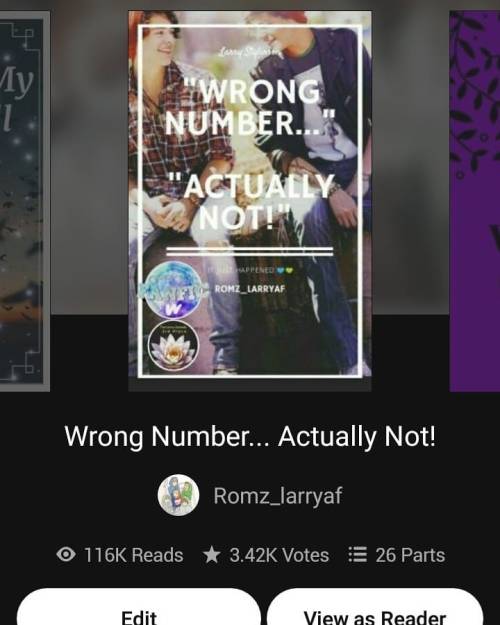 Hello beautiful people, Bet you don’t remember me. I have recently been inspired and wrote this, thinking of making it a series let me know what you think and if I should make part 2.

Ours bodies collied together as he pushed the people out of our way. The music was blasting behind us and I could feel people stare at us but not in a judgmental way like people did at my dads church. They were cheering us on as we made out.  He pushed open the bathroom door and pushed me up against the wall. I smiled as our lips connected each time we were so in synced. I had never felt like this before, nor have ever done such as thing as make out with a stranger at a club. Wait until my dads church finds out I thought in my head. But in that moment when I felt his hands gently stroke my neck I gave no care what those people thought of me. I felt him smile too, I ran my hands through his brown soft hair. His lips so plump and soft, his arms muscular I just wanted him to wrap his arms around me forever. He was tall, taller than a girl wearing heels making me 5’8. He stopped for a moment and we locked eyes. His green eyes looked into my dull hazel eyes. He smiled as he leaned once again to connect our lips. I felt his hands feel my breast, I didn’t stop him it felt good. I just wrapped my hands to the back of his neck and pulled him closer. I felt his hands go lower and grip my hips. I stopped kissing him to catch my breath. He pulled me closer once again this time his hands grabbed my ass, he pressed himself on me and I could feel him. His hands came to a stop in front of my pants and he began to unbutton them. I gasped and pulled away from our kiss. I stood still against the wall waiting for him to demand we have sex. I opened my eyes to meet his gaze. He had stepped back and stood there in front of me with a worried look.

“Are you okay?” He asked in a soft voice. I let my shoulders relax.

“I-I don’t— can’t have sex with you” I say scared of what his reaction was going to be. He softly smiled and stepped back a little more.

“Okay” He said with a smile, I buttoned up my pants and looked down at the floor.

“We all have our limits.” I looked into his eyes, he was being sincere, something I was not used to. He stepped closer again and gave me a kiss, but not like before, this was more gentle like he cared about me. Which couldn’t be farther from the truth since I met him just an hour ago? I kissed him back, he placed his hand on the back of my neck once more and kept gently kissing.

“Thank you for understanding.” I say pressing my forehead up against him. I could feel him get tense but then he relaxed.

“Not every guy you meet will be an asshole.” He chuckled. He stepped away first walking towards the door. Before he could open it, the door swung open hitting him in the face. He groaned In pain as he leaned against the wall with a bloody nose. My eyes went wide and I quickly walked over to him.

“Lily!!” I heard my name being screamed by my best friend Monica. I looked over to her standing my the door.

“James is here! We have to go!” My heart started to race. Mystery Man groaned again and my attention went back to him.

“I can’t just leave him here you broke his nose!” I say grabbing toilet paper in a panic.

“If we don’t leave you are going to look just like him!” She grabbed my arm as I tried to tend to mystery man.

“Lets go!” She demanded, I looked back at him he.

“I am fine.” He says wiping the blood of his nose. He smiled and winked at me.

I felt horrible leaving him like that after MY best friend did that. But Monica was right, James would have my head on a platter if he found out where I truly was. I ran out the bathroom with Monica she led me through the back door were the other girls were already waiting for us in the car. Goodbye Mystery Man, that was a wonderful first kiss.

WHERE ARE U PLS COME HOME

guys i haven’t even watched voyager yet i just saw harry kim and immediately fell in love. his power

If whoever said they missed me wants to come back out and offer me some kind words, now would be a great time.

Seriously why do I just panic when threatened from behind a door but go into fight mode when confronted? Why can’t I be more like fucking Vincent? He’s just calm and ready and small fucking wonder he’s host. Like can he please deal with this now instead because I know he would actually be able to go through with defending ourselves properly and I just can’t do this right.