not me discovering that Haruki and I share birthdays

#given, #haruki, #haruki nakayama, #mom I wanna cry bc of that, #never be the same
4 notes · See All
xulipsPhoto

THEY CUT HIS HAIR IM OFFENDED.

got into the given fandom recently!! got dragged in to it by my boyfriend. you can already guess who’s my favorite. 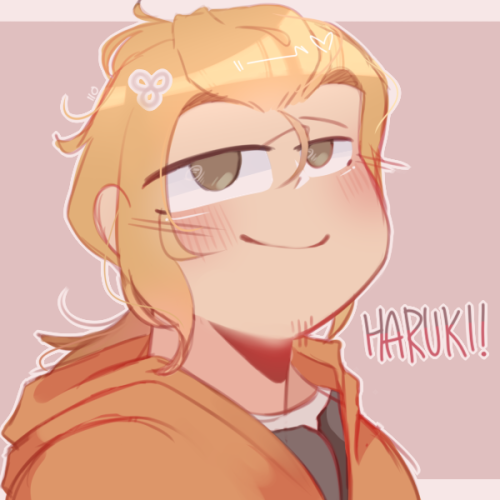 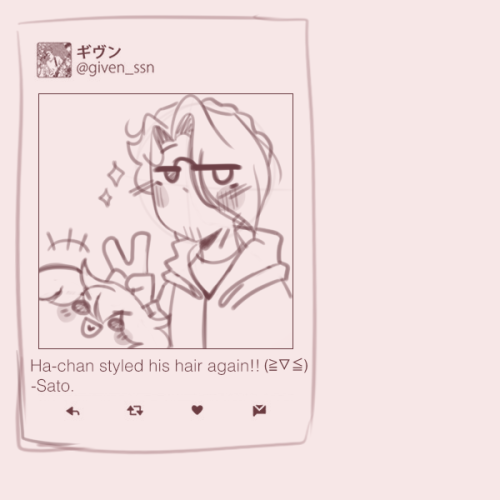 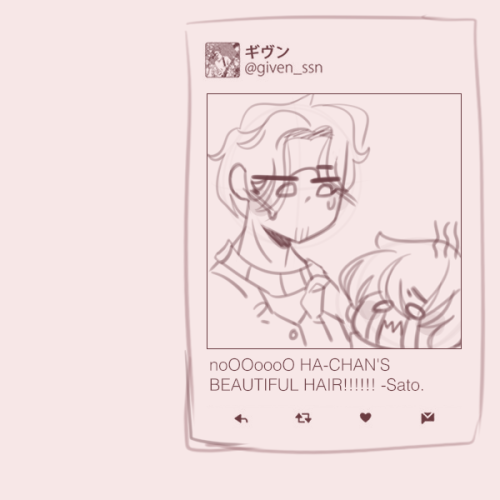 If Yuki Yoshida were alive

Months ago a fellow user had posted a blog in the Given amino about what would happen if Yuki didn’t die, which also reminded me of a blog I had read years ago in the official Anime amino, that blog was discussing about what if characters such as Kaori from Your Lie in April who had faced a tragic demise, didn’t die in the first place. For me Yuki’s demise is equally as tragic as that of Kaori’s.

Who is Yuki Yoshida

Yuki Yoshida is a supporting character from the Given anime series who was Mafuyu Satou’s childhood friend and ex boyfriend until his own sudden death by an apparent suicide shortly after having a small fight with Mafuyu. He was described as a typical extrovert; a cheerful, outgoing, carefree and moody boy who was very affectionate towards Mafuyu, who unlike him was a shy, submissive and introverted.

His role in Given

As a supporting character, he plays an important role in the series, especially in the lives of Mafuyu, Ritsuka, Hiiragi and Shizusumi. One of the reasons why Mafuyu and Ritsuka got closer is because of Yuki’s guitar, which also made Ritsuka more curious about Mafuyu since it’s unusual for a novice like Mafuyu to own a fancy guitar. His death is the main reason why Mafuyu got separated from Hiiragi and Shizusumi. His death is also the main reason why the song Fuyu no hanashi has existed in the first place. Finally his demise is the main reason why Mafuyu and Hiiragi live with guilt, because of that incident we see Mafuyu panicking everytime he and Ritsuka get into a squabble, and no amount of Ritsuka assuring him that he would never leave him comforts Mafuyu.

If he were alive

If he were alive it is obvious that it would totally change the entire plot, it would focus mainly on Mafuyu’s relationship with Yuki and maybe Ritsuka wouldn’t have existed in the first place, if Ritsuka didn’t exist then perhaps chances are that the Akihiko-Ugetsu-Haruki arc too wouldn’t have been existing as well, since I think Ritsuka is the link between Mafuyu and his old friends and Akihiko, Ugetsu and Haruki. Even if Ritsuka existed, then he wouldn’t have been the main protagonist of this series.

(Before I start with my theory I would like to add a disclaimer that, I am a very bad story writer so my theory might sound quite weird.)

A love triangle between Mafuyu, Ue and Yuki seems kind of plausible. It wasn’t just Mafuyu falling for Ue, Ue himself had fallen for Mafuyu. Or maybe after that small fight either of them might decide to break up which leaves Mafuyu heartbroken and the anime might be about Mafuyu trying to start a new life after the break up.

For example:- Just like there was a fight between Mafuyu and Yuki which caused that tragic ending, in the same manner I have heard that in the manga there is a chapter where Akihiko and Ugetsu gets into a violent fight. Lets say that few days after the fight Akihiko comes back to the home only to find that Ugetsu had killed himself and that ends up traumatizing him so much that he turns into an alcoholic and at the university one usually finds him sleeping on random places, just like we see Mafuyu with Yuki’s guitar everywhere in the same manner we would see Akihiko with Ugetsu’s violin everywhere. Haruki finds him in that condition in an abandoned staircase and kind of looks worried about him because Akihiko has got some bruises on his face so Haruki decides to sit beside the sleeping Akihiko until he wakes up.

(Since I still kind of lack knowledge about AkiGetsu so it’s a little hard for me to picture MafuYuki with the AkiGetsu kind of relationship.)

Because Yuki really understands Mafuyu’s feelings well he would definitely realise that Mafuyu has become very dependent on him because of which Mafuyu started to give Yuki silent treatment and this hurts Yuki very much. Yuki would also have conflicts about whether to choose music over Mafuyu and one day he decides to confront Mafuyu about his feelings and this confrontation slowly turns into a verbal fight which results in Yuki kicking Mafuyu out of his house (ofcourse after this Mafuyu would end up staying with his Mom)

This experience leaves a bitter taste in Mafuyu’s mouth so he decides to learn guitar to prove that he is much better without Yuki, he finds out that Ritsuka Uenoyama a fellow classmate (let’s say they are in the same class) is a guitar prodigy and he pursues him to learn about guitar. Ritsuka Uenoyama already has a secret crush on Mafuyu but fears to admit it because he thinks himself to be “weird” for thinking that so when Mafuyu pursues him he gets all tsundere and defensive.

I would like to thank Courtney (ig :- @xplr.cosplays) for posting her blog if it weren’t for her blog I wouldn’t have come up with these thoughts in the first place. However I take the credit for the cover picture which I had drawn it, the cover picture is based on how I perceive Yuki Yoshida.

I also want to credit that old blog I had read years ago but I wonder if it still exists.

He got NO BUSINESS—

Being as pretty as he is!

#haruki nakayama, #haruki given, #given
34 notes · See All
incorrect-given-quotesText

Haruki: How are we going to beat Hiiragi’s band?

Uenoyama: I’m not supposed to have any ideas. I’m the hot one.

Akihiko: I’m pretty sure I’m the hot one

I colored this a while ago. 😭 this year, im telling ya guys, is so weird

I love these idiots with all my heart. Cannot wait for the movie. (My favs)

Not Given, a band from a shonen ai manga/anime, having more monthly listeners on Spotify than some actual real life artists omg

#I remember when the Spotify page was first created and they barely had any listeners wow, #given manga, #given anime, #uenoyama ritsuka, #mafuyu satō, #haruki nakayama, #akihiko kaji
58 notes · See All
honeypies-iconssText

given as cinnamon rolls

Guys please help me, what happened to the Given anime movie? Like… It was supposed to air on August 22nd and I see the hyped comments below the trailers but I can’t find it anywhere and there’s no information??? Wtf is happening?? 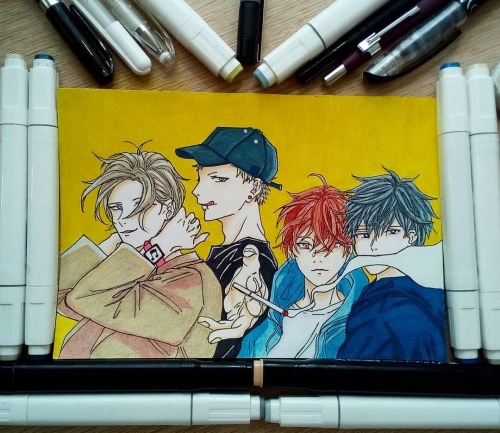 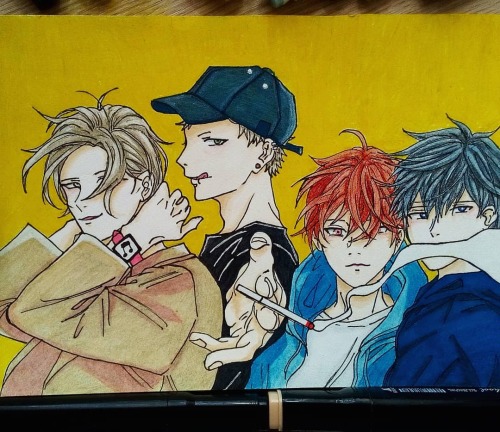 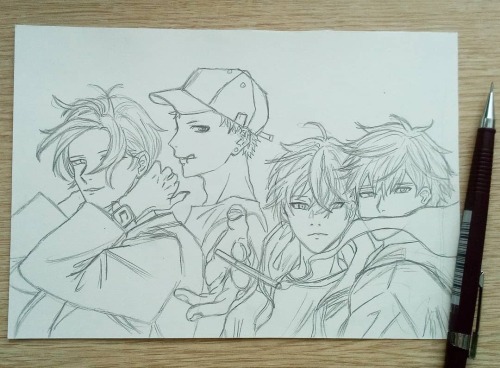 And with Haruki’s blessing, I started talking to Mafuyu more and more.

On October 3rd, he asked me what day it was.

Manga: Given / ギヴン  by Natsuki Kizu