Already been done for a similar prompt HERE !!

We’ve got a post doing fluff HCs for him HERE !!

There’s not much to say about our routine.

We’ve been allowed to spend time with other inmates thanks to our ‘cooperation’ but… that might change at any minute, unfortunately. Though we prefer spending time alone, it doesn’t hurt to be around others and catch a glimpse of what’s going on outside of Arkham.

As for Gotham itself, well…

I don’t think it’s got much going on aside from usual villainy.

it kinda depends on how you meet.  if you just kinda bump into one another, i think is first instinct, as with most things, is to flirt. he loves cute people and loves seeing people blush. he doesn’t feel like he’s in danger since you are so cute and all. he’ll probably underestimate you and if you want, you can use that to your advantage to beat him. or you can flirt back.

again, it depends on how you meet or what you’re doing when he first sets eyes on you. if youre his type harvey might get a little flustered. he might stammer a little and hesitate before calling his goons because he wants to look at you for a few more seconds before everything goes to shit. twoface is similar but more in a “oh gee i hope this doesnt awaken anything in me” kinda way.

spoiler alert: it did.

ive is not a particularly mothering person, not to humans at least. but with you? god she just wants to baby you so much. you’re so cute why are you out fighting crime and not sitting on her lap while she plays with your hair??? if shes able to control your mind she absolutely will do that but if not shes just going to flirt with you constantly until you give in.

ohh hes going to enjoy scaring such a cute little thing. imagine his disappointment when he finds you don’t scare easily. he thought this was going to be like the big bad wolf torturing a little bunny but its more like the other way around. can you stop staring at him with those adorable eyes? you’re making him feel …things. emotions and shit and he’s not happy about it. god hes such a sucker for the puppy dog eyes too.

oh you are just ADORABLE! How on earth can he take you seriously when you’re this cute?! he doesn’t even have it in his heart to put you in a death trap…well maybe just once, to see if you are as smart as you are cute. he wont let you get hurt, don’t worry. its just an excuse for him to watch you get all indignant, he just LOVES the little look on your face when you’re mad.

harley loves cute things and you are no exception. i think the biggest danger you’re in from harley is getting a concussion when she rugby tackles you into a hug and nuzzle or when she kidnaps you to put on her shelf. don’t worry, she’ll take very good care of you as long as you let her play dress up.

there you go winter, took me a while to get round to this one what with the illness and lack of motivation so i hope this is acceptable

got something you wana talk about? send me an ask or a dm!

This is all @xanthossamurai fault. First they said these three are like Gotham’s version of the Trinity. And then they made me think about Harvey in Supes t-shirt and Jim in Wondy’s. 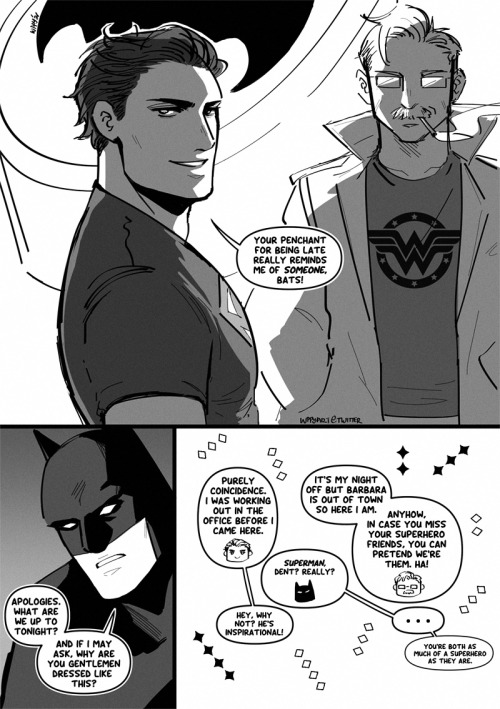 i kinda stammer when im nervous too so ya not alone there bud.

he means well. he likes these little things about you but hes probably the first to offer to have it changed for you. surgery, cosmetics, new clothes, a speech or language therapist you name it, he’ll pay for it. its not so much he WANTS you to change or even that these things bother him, its only that he wants you to be happy and he wants to be the one to make you happy.

Harvey is the first person to understand hating something about yourself. that being said, sometimes he struggles to understand how you can hate something about yourself that’s so…minor. he doesnt want to minimise but having crooked teeth or a stutter isnt exactly having half your face burnt off, you know? he wants to point out how cute it is but at the same time, he doesnt want to make you feel bad by calling attention to it. Harvey mostly just admires in silence. Twoface on the other hand can be very out loud about it. whether thats a “oh get over it” kind of thing or a “DAMN LOOK AT ALL THOSE GORGEOUS FRECKLES” kind of thing.

ivy isnt really one for judging based on appearance. if you had something about the way you looked that was “off” or even that you just plain didnt like, she’ll be the last to actually notice. traditional beauty standards arent really her thing. shes emotionally intuative, so she might sense your upset before she actually understands the problem and give you extra love and attention anyway. she’d never try to change you or make you feel like you needed to change to be accepted (by her or others) because its the world that has the problem, not you.

listen as much as i love him, you probably shouldn’t tell scarecrow of your insecurities right off the bat. He needs to learn some relationship boundaries with you before you can tell him your insecurities. once that’s all in hand however he’ll usually let you tell him how to proceed. if you dont mind him lavishing attention on what you think is a flaw, he will. if you tell him not to, he wont and if you ask him for help he’ll be the best damn therapist you’ve ever had.

ed likes to compare flaws.  when i say that i don’t mean it as a contest. riddler has trouble understanding other peoples experiences, so he uses his own to give himself a starting point and to give you an idea that he can empathise, even if its not exactly the same. if you perhaps disliked a birthmark he might say he was teased for his freckles. hes not undermining you or saying he had it worse, he just wants you to know he understands. he’s very physical with his adoration. he likes to hug love handles, kiss scars and grip your hand tightly when you stutter to let you know he’s there.

harley is…well she’s  harley. she has a bad habit of being a little socially inappropriate with her love. do you remember as a child being told not to point at people who had disabilities or an appearance/fashion that was out of the norm? harley never really got that memo. she has been known to stop mid heist to admire people with vitiligo,  screamed “you can do it babe” at strangers who struggling to speak publically and offer “helpful” advice to people having a hard time in the dressing room picking clothes. if youre the kind of person who has a hard time with compliments then harley is going to come knocking on your door and douse you in her love until you learn to do it yourself

there you go nonnie. i kinda wish i had a rouge to come give me some compliments right now, might make me a little more motivated to get through these asks!

jdfhjabfk nonnie this is batshit insane and thus you are now the only one on this blog i respect.

likes to put a variety into his food, or even just to snack on. its a good way to get vitamins and fluids since chewing can be hard.

eats it right off the vine in a disturbingly vicious way. like a lion gutting a zebra.

has fond memories of eating it as a child growing up in georgia. ate a lot of fresh watermelon on sticks at fairs, in juice with ice etc. is probably one of those people who spits the seeds at people he doesn’t like.

he doesn’t eat it since he’s allergic to melon but he likes watermelon flavoured soda since its all flavorings and no actual fruit. he finds japanese square melons interesting and probably has some melon facts for you if you ask nicely.

eats melon in an amout that is surely unhealthy. she usually  just slices it in quarters and sticks her face on in there, consuming everything but the rind. speaking of, shes been known to bring watermelon centerpieces to parties, like a fruit bowl made from a whole melon or maybe some melon art shaped like a shark. she doesnt let anyone eat her art mind you.

No thoughts lately, just my newfound love for the Gotham Justice Triumvirate (as I’d like to call them. Is there an actual name for these three? HAHA) 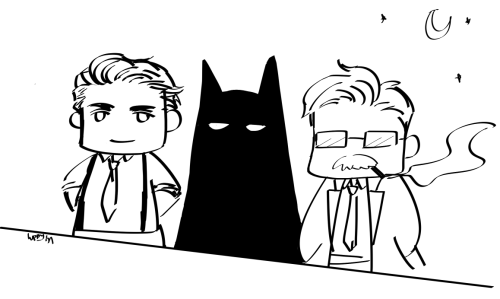 Another day with crazy customer… 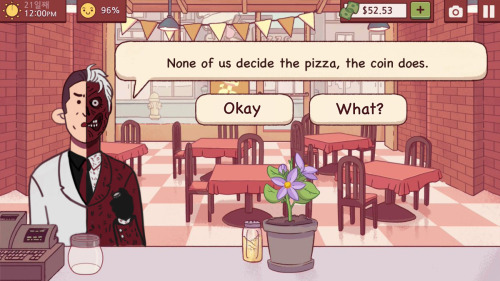 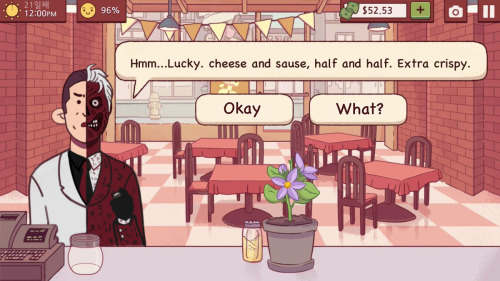 Little hc that Selina got to know Harvey before he became Two Face (thanks to Bruce), so now she is his assigned mom friend for meltdowns. She’s mostly managing BBH, because she sees right through his defences

pov: you just told him you don’t believe in harvey dent 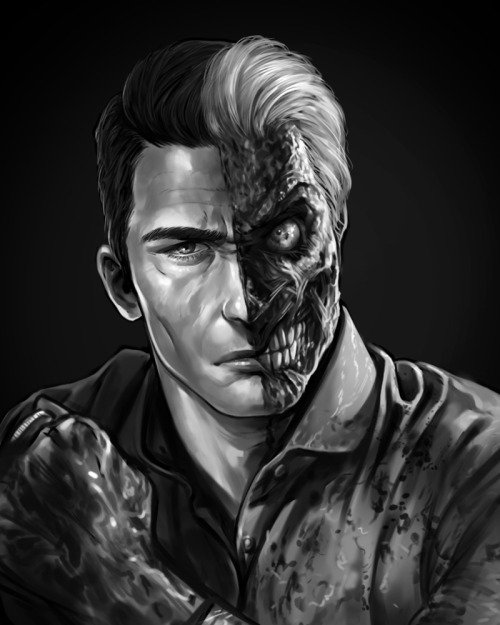 you know what this is <3

uhhhh an extra one. It is on the suggestive level, but nothing is actually shown 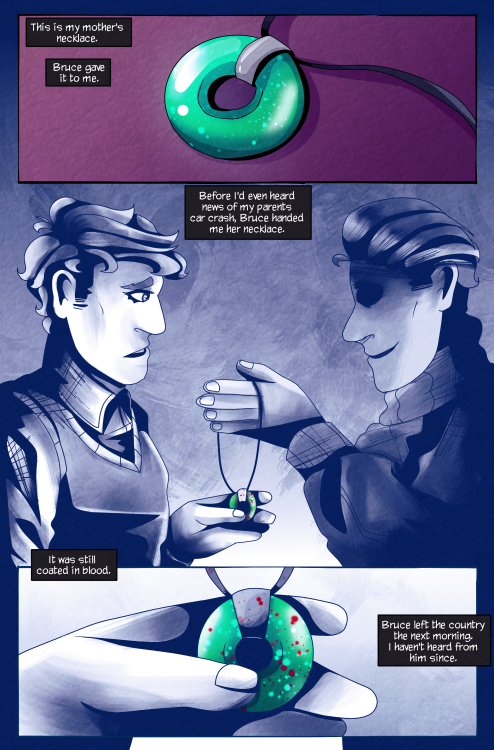 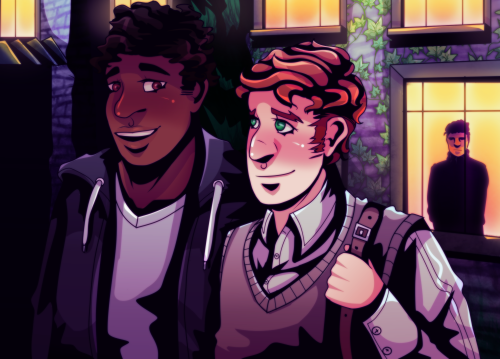 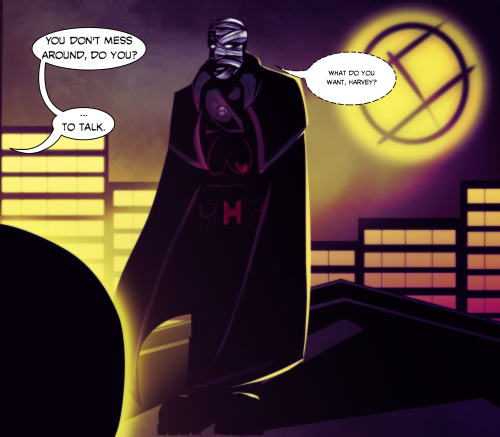 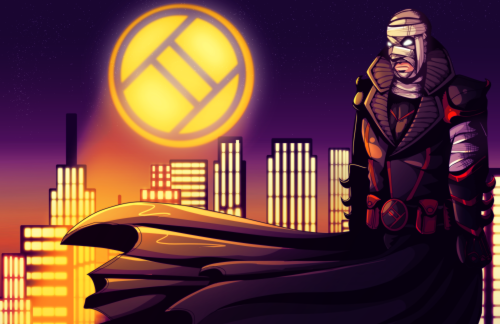 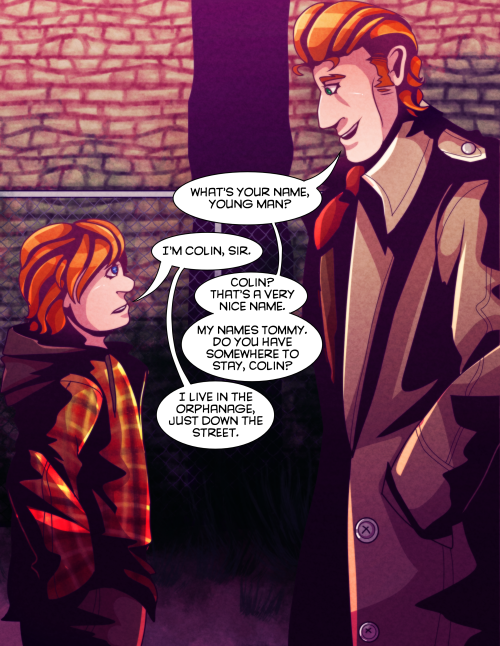 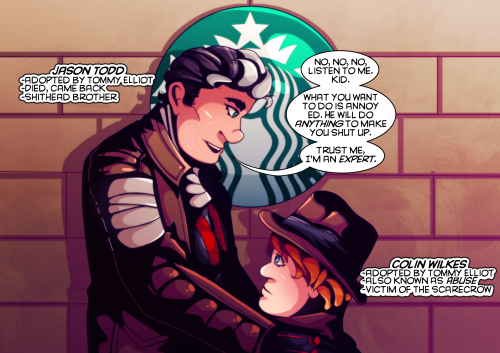 Harvey Dent but vintage comic aesthetic. Working through requests over on instagram

“Bruce exchanged a look of relief with Harvey. Harvey still didn’t seem entirely comfortable with breaking the law, but Bruce didn’t think he would go running to the precinct to turn himself in, either.”

Some pre two-face period. They are near the court by the way.