Jamie’s heart stopped. Well, actually it had stopped moments before, at the bottom of the lake she was now staring into. But it had felt rather less climactic than she’d expected. Maybe it was because she’d been thinking about her death for so long — not in a morbid way, exactly, but more in anticipation of what would come after. So she supposed it made sense that her heart should “stop” again. This was really the moment she’d been waiting for. And it was just as she’d dreamt it… which didn’t make any sense.

She rose slowly from her crouched position by the water’s edge, still taking in her inexplicably youthful reflection and turned toward the voice she’d been without for nearly 20 years.

“You’re a bit earlier than I would’ve liked it, but…”

Dani flashed her brilliant smile and covered the distance between them, grabbing Jamie’s hands. She looked exactly as she had the last time Jamie had seen her but with a lightness about her Jamie hadn’t seen in even longer.

Jamie looked down at their hands, then back at Dani, still in shock.

Dani’s eyes widened for a moment. She opened her mouth to respond, but then closed it again. She released Jamie’s left hand from her right and brushed Jamie’s hair behind her ear, cupping her face.

“How could I forget you?”

Jamie was sobbing before she’d even fully processed what Dani had said and, by then, she was already in Dani’s arms, which only made her cry harder. She’d missed being held by Dani for so long — it’s why she’d never been able to bring herself to sleep in their bed again, or any bed for that matter. But she realized now that she’d never fully forgotten the sensation, either. She pulled back abruptly.

Dani didn’t respond but looked apprehensive. Sniffling, Jamie wiped her face with the back of her hand.

“You were there the whole time?”

She didn’t want to, but she could feel anger rising inside her.

Dani looked pained now. Jamie wanted to stop, but she couldn’t. She pulled away completely and turned around.

Dani sounded on the verge of tears. But it was too late. Jamie whipped around.

“I could’ve seen you! I could’ve been with you this you this whole time!”

Her voice broke, and she was crying again. She could see tears streaming down Dani’s face, too, but the words just kept coming.

Dani didn’t respond for a moment, then swallowed.

Jamie shook her head and looked down at the ground. First, Dani had left without giving her the chance to say goodbye and now she’d learned that she wouldn’t have had to goodbye at all if Dani had only…

Her eyes burned as she squeezed them shut. But then, just as quickly as it had come on, her anger began to disappate as she started to think about what Dani had gone through. She’d had to live — well, live on — with her choices, too. Dani had stayed by her side, watched over her, all the while waiting for her to… move on.

She hadn’t, of course, but an overwhelming sense of guilt washed over her. Even in death, Dani had thought only of her, while waiting for her to — wanting her to — love someone else. She opened her eyes and looked up slowly. Dani now looked exactly as she had that final night: devastated.

She was the one apologizing. Of course, she was. Jamie was for once at a loss for words and found herself walking away.

Jamie walked into the greenhouse before she even realized she’d chosen a destination. She sat down on the bench, leaned over and buried her face in her hands, groaning. She’d literally gotten exactly what she’d wished for, and she’d already screwed it up.

She heard footsteps approaching and looked up just in time to see Dani reach the entrance, take a few steps in, then hesitate just as she had all those years ago.

Jamie couldn’t help but laugh and was relieved to see Dani crack a smile. She cleared her throat, sat back and tapped the space beside her. Dani sat down swiftly on the edge of the bench.

Jamie had been about to speak herself, but she didn’t know how to follow that. She turned to face Dani.

“That’s the age I was hoping you’d lived to.”

Jamie laughed, but now she felt even guiltier. She mulled over what to say next, but Dani broke the silence again before she could decide.

Jamie’s lips were on Dani’s before she could finish the thought. And then her hands were in her hair. She pulled Dani closer and closer. Everything she’d been holding in, holding onto, she put into the kiss. Much too quickly, Dani gently pulled back, cupping her face. Jamie opened her eyes and met Dani’s. She could see a question in them.

Dani sighed in relief. She’d already known it was the truth, of course, but she’d needed to hear Jamie say it. And then the sigh turned to laughter. She’d been with Jamie all this time, but finally hearing that nickname again brought back the same butterflies she’d felt the first time she’d heard it, and every time thereafter.

Jamie just listened to it: Dani’s laugh. She could now certifiably say it was and would always be the most beautiful sound she’d ever heard in her life. She leaned in until her forehead touched Dani’s, and Dani’s laugher turned back to a sigh.

Now it was Jamie’s turn to laugh.

She could only just get out her retort before Dani replied with her own, decidedly non-verbal one.

Dani meets Jamie at a farmers’ market, and her world takes a turn.

Chapter 5 is up now: a drink, a story, and a brick wall

I know I’m completely missing the point but you’re trying to tell me that Jamie was sleeping with the front door open (just the crack but still open) for years and nobody robbed her? 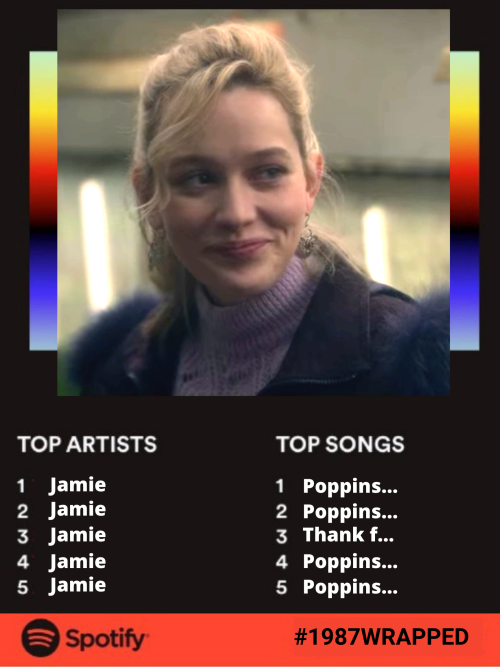 yeah definitely. she had lived past when she was supposed to die and had become a sort of shell of her former being. i think she was held alive by spite and stubbornness alone, and her anger at being sick while everyone else was healthy, which would twist anyone.

also i actually really liked the parallels between violas husband and her sister and henry and charlotte. because even though violas husband definitely felt some attraction to violas sister (i just woke up and can’t remember either of their names) and viola was always sick and couldn’t see them, he stayed loyal and nothing ever happened between them, even though it clearly could have.

i will not elaborate

A morning at the apartment

Jamie is making a breakfast sandwich in the kitchen. She takes a sip from her tea mug just as Dani walks in and hugs her from behind. Jamie smiles and turns her head to kiss Dani.

She hands Dani her mug. Dani takes a sip.

Dani smiles mischievously and refills it from the kettle, then takes out her own mug and pours in the coffee Jamie made for her. She holds the mug out in front of Jamie.

Dani: Call it even?

Jamie: Once was more than enough.

Dani smirks and goes to respond. Jamie, trying to stop smiling, turns to face Dani, pointing a spatula at her.

Dani kisses her, then takes the mugs and sits down at the table. Jamie watches her, blushing, then takes the sandwich off the pan and cuts it, putting each half on a plate. She places one in front of Dani and the other at her spot. But before she can make it there, Dani grabs her from behind and pulls her onto her lap. Jamie smiles, unsurprised.

Jamie: You know we got two chairs for a reason.

Dani just smiles. Jamie sighs dramatically and reaches over to grab the sandwich off her plate. She hands it to Dani and grabs the other half off Dani’s plate. Then, she puts her feet on the bars underneath Dani’s chair and her arm around Dani’s shoulders and kisses the side of Dani’s head.

honestly dani and jamie should have just… shared viola. like imagine if they kept trading viola’s ghost and then beat her up like that key & peele skit where they beat up the devil.

Miles: What if the only reason we can’t walk through mirrors is that our reflection blocks us?

Flora: What if they’re protecting us though? What if they know that the other side is horrifying and painful and they are trying to keep us from crossing over?

Miles: I must be on the wrong side of the mirror then.

Jamie [trying to sleep]: I swear to fucking god if you both don’t shut the fuck up.

#i was bored and drew this during class, #i don’t actually know what it is, #but it’s something, #anywayss, #i have to study for my exams and they’re distracting me, #the haunting of bly manor, #the haunting netflix, #haunting of bly manor, #dani clayton, #jamie taylor, #jamie the gardener, #dani x jamie, #damie, #victoria pedretti, #amelia eve
39 notes · See All
sapphosarchiveText

Grief is really summed up well when in the haunting of bly manor Flora says:

“I thought I was going to die too. I was sure of it. But then I thought, what if I was already dead? But nobody else knew and I was walking around dead but everybody could hear and see me. That was dreadful. It only felt like dying because actually, I was still alive. You have to be to feel that way. I wasn’t dead I was just really, really sad.”

Grief is really summed up well when in the haunting of bly manor Flora says:

“I thought I was going to die too. I was sure of it. But then I thought, what if I was already dead? But nobody else knew and I was walking around dead but everybody could hear and see me. That was dreadful. It only felt like dying because actually, I was still alive. You have to be to feel that way. I wasn’t dead I was just really, really sad.”