cautiously excited about recent news, so…. 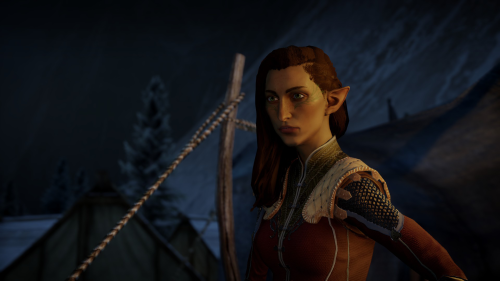 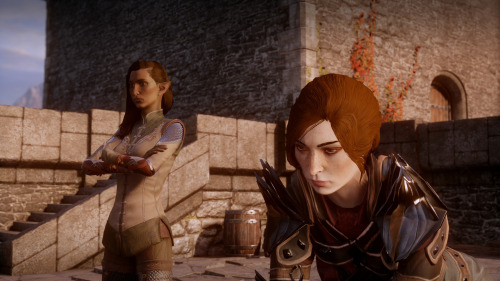 Someone wanted a Bethistair baby, so here is Hawke meeting a royal Bethistair baby. The timing doesn’t actually work out right for TEOS so maybe it’s a TCOYS baby idk it’s fine @dadrunkwriting

“He’s a bit small for royalty,” Hawke said, eyeing the little princeling. He fidgeted in the bassinet, and a tiny sock went flying. Bethany moved to fetch it.

“You can hold him, if you want,” she called.

Hawke considered this. “I’m not sure I’ve touched a baby since you were a baby, actually,” she said. She’d waved at many, always returned a smile or a funny face when offered, but nobody ever seemed that keen to hand a baby to the woman sporting a dozen visible blades.

No blades today, though. Fenris had insisted.

Duncan kicked off his other sock while Hawke considered her approach. Wielding a baby bore no resemblance to wielding a dagger. A book hold perhaps? Or more like a bottle? People did speak of nursing tankards, and Hawke had some experience with that. “Do you want me to pick you up?” she asked him, to which he responded, “A-ba-ba-ba-ba.”

She glanced at Fenris, and he helpfully provided, “In Qunlat, ‘ba’ means ‘no.’”

She admired him instead, happy little thing that he was, fist in his mouth. He gave her a confused glare identical to the one his father usually trained on her. He followed it up with a smile, and that was like him, too.

Fenris gave her a slow look, then with a sigh turned to the baby. After a moment, he tilted his head. “I cannot believe I am saying this, but I think I see the appeal. They do look… chubby.”

“Why does that make me want to put them in my mouth?” Hawke asked.

Hawke stared at his little, round tummy. She knew what she had to do. She leaned in, lips first, as both Fenris and Bethany cried, “No!” and she blew a raspberry on his royal highness.

Duncan giggled, his little feet kicking and clocking Hawke right on the chin.

“Oh,” Bethany sighed with no small amount of relief, and Hawke almost felt offended as Bethany scooped him back into her arms.

“Did you really think I was going to bite him?” Hawke asked, sticking out her finger for Duncan to grab it, “A baby? A baby as cute as that one with chubby little cheeks and perfect little fists and fat little arms that I just want to put right in my… Right, yeah,” she said, turning back to Bethany with chagrin, “No, I hear it, I understand the concern.”

But Duncan wasn’t concerned, holding her finger and waving it around. And after a moment under his firm and bubbly peer pressure, she relented in her protectiveness of him and allowed Hawke to hold her nephew.

“We are going to be such good friends,” she whispered.

“Maker preserve us all,” Bethany muttered.

Never Leave Your Side

A/N: every handers writer must write at least one fic featuring anders wrecked with guilt post-kirkwall and hawke comforting him with the unbridled all-encompassing love he has reserved for the possessed disaster apostate mage only🥺🥺🥺 hope you enjoy!

Read on AO3 or below the cut!

(You are a mistake.)

Anders stared at the burning beacon that was Kirkwall fading in the distance, clouded in smoke. A view he never thought he’d get to see—in these circumstances, at least, in this company. With Hawke standing right there beside him, one arm thrown around Anders’ shoulders. A comforting, if solemn presence. Warm, despite the chilly silence hanging over them. Close, despite the widening divide of lies Anders had carved between them.

Hawke to Sebastian when he first joins the party:

🎵All my friends are heathens, take it slow…🎵

Hi! So this turned into full blown smut, and I apologise if it was not what you were looking for, I wasn’t entirely planning on it but it just kind of happened.

Still, I hope you enjoy!

(If you’d like me to write you a dragon age fic, send me a prompt from here!)

Fenris still wasn’t sure exactly what had possessed him to take Garrett Hawke up on his offer of “coming to see him some time.” But here he was, freshly showered, in a shirt Isabela had once told him looked good, trying not to fidget on the street outside Hawke’s house. The neighbourhood Garrett has moved to is a wealthy one, not fantastically different from the one in which Danarius had bought property. Fenris still feels nervous in the shadow of the great decorative trees grown in the sidewalk to give an illusion of bucolic romance to the urban sprawl. There are no police here, that he can see, but he does not doubt that they would treat an elf’s protests of a midnight assignation with outright skepticism. Fenris doesn’t know whether Garrett has considered this - he suspects he hasn’t, as he hears the man hushing the great booming bark of his mabari before it wakes the whole street. Still, Fenris hurries inside without waiting to greet him, and a startled Hawke shuts the door behind him before turning to face him.

Abruptly, Fenris finds himself pressed between a rack of coats and Hawke’s great, barrel chest. He tries not to stare at the coarse black curling hair visible in the v-neck of Hawke’s white cotton t-shirt. Garrett, for his part, takes in a deep exaggerated inhale and grins at him. “You smell nice.”

Fenris huffs, flushing, but whatever he’d planned to say is lost as Garrett opens the inner door and Dog pounces on him, her great paws bigger than Fenris’ hands as her muscular body nearly knocks him over. Fenris laughs, feeling some of the tension that had been building in him shatter as he catches the dog, scratching her short, sandy fur. “Hello girl. Did you miss me?” 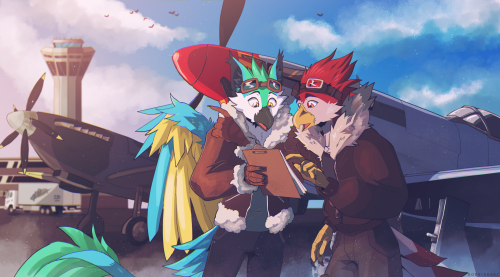 Two more Avatar Commissions! A Hawke and a Warden OC

They gave me a title I earned with blood. I gave all of it. Yet they demand more. Smear it on my face, tell me its pretty. Tell me its an honor.

Funny, isn’t it? What they do with a mage’s blood. Shackle us with it. I’m chained to the city of chains now.

From Blood and Ash Headers

Trying to get back into writing The Merrill Sessions after spending the last little while in christmasfic town. Have some seriously unhappy Hawke:

Isabella tilts to knock out one hip, a hand nudging the robe to expose just a touch more thigh as she does, and winks at her. A little bit more energy floats up to her through the air with it. Then Bella struts up the stairs, exaggerated sway and a whole lot of springy hair-bounce, even if it’s uneven, and plants a kiss on Hawke’s cheek as she passes her by. The sensation spreads slowly through her cheek, the warmth very almost getting in. She should tell her, but she’s too numb and slow to react in time, and then Isabella disappears into the bedroom, and Rusty is still complaining that someone is at the door.

“That’ll be Blondie,” Varric says. Hawke thinks, great, and grits her teeth, “I’d better go help Merrill,” Varric adds in a hurry, and then he shuffles away too, the traitor. But he’s right to, this is a conversation she should probably have with Anders alone, if only for safety reasons. She’s too tired for shouting though, she thinks. Assuming the worst will happen, she decides that if he says anything uppity she’ll just force-smash him back out the door again. Nail, coffin. She winces at her own thought. Bad metaphor.

Hawke, are you OK?

yana and isabela because i can’t stop thinking about Them 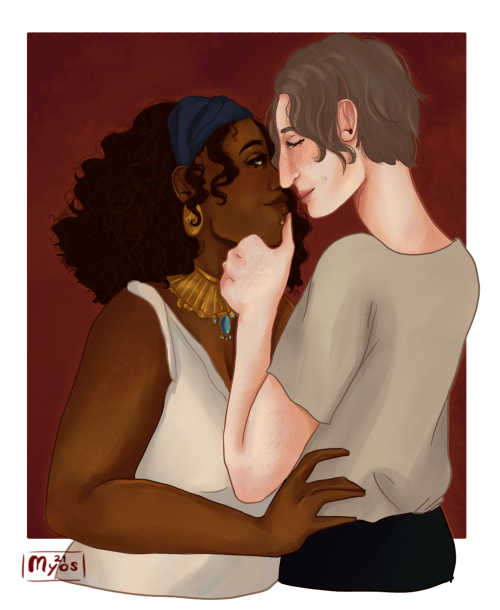 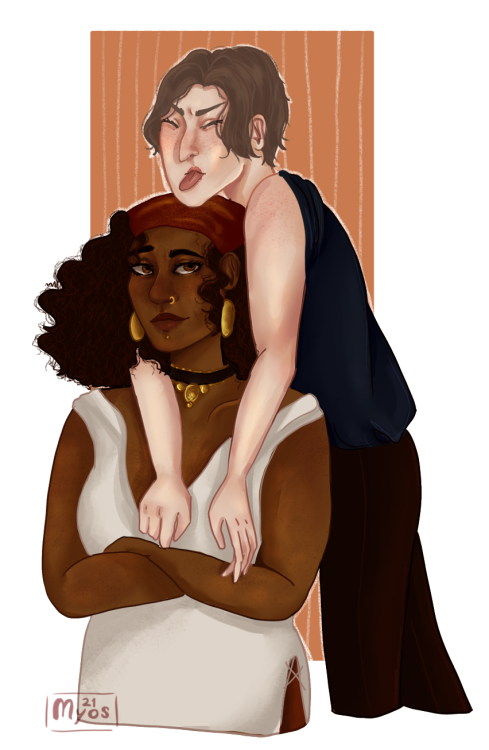 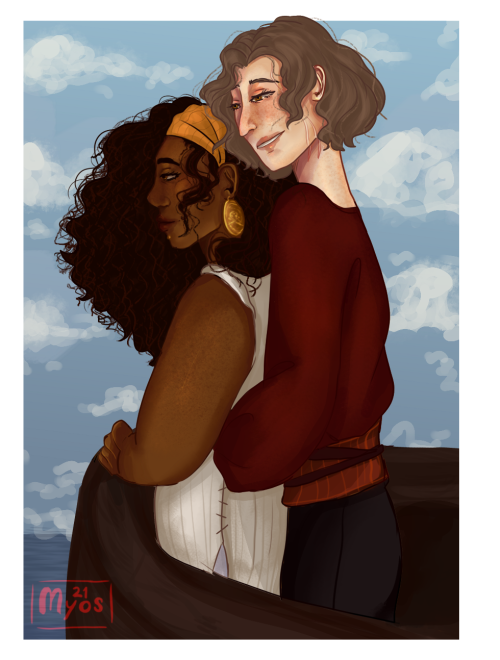