I want this relationship to happen so bad 👌🦋 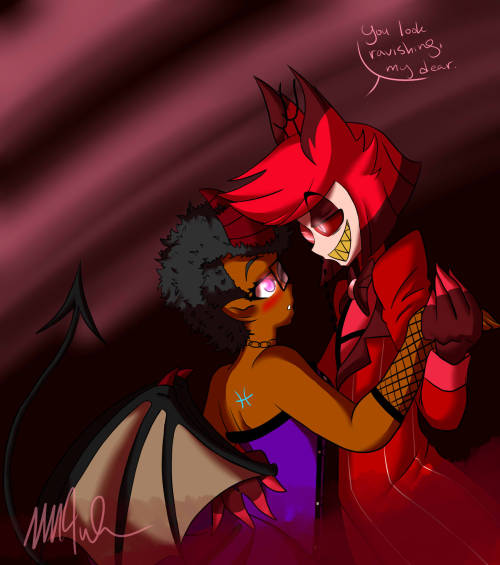 *Alastor’s expression changed to a much more menacing look as his horns grew double their size and his eyes changed to dials like on the radio. Bending his head as his head shook making a crackling sound looking at Angel over his shoulder*

Angel!…. What was that you just said to me?…

Is this an April Fool’s joke??

Alastor and Angel belong to Vivziepop

Husk from Hazbin Hotel I hope you like it!

Based off one of my favorite little comics

Weaknesses : Water, her stubbornness, the cold, glitter =Character Info= Personality: She is charismatic, headstrong and takes the lead. She is motherly and protective of her family. She is adventurous and spontaneous. She is partly vain and a bit of a narcissist and will hog the spotlight when it comes to show business. She can comes across as pushy and bossy and self-centered. She is also a sadistic nymphomaniac.

Backstory:born into a rich family who happen to be one of the many overlords in hell. They are into show business; her father owns several 5 star Casinos and performs as a Magician; his wife is his assistant. Aside from being a magician’s assistant; Ruby’s mother is also a talk show host. The couple provided a lavish life for their daughter. Ruby grew up wanting to follow in her parents’ footsteps; in her own way. She has always been fascinated with exotic animals and the rich culture of circus life. She also was giving an opportunity to wayward demons in need of a job.

Fighting Style: she is very flexible, quick and agile so she will use that to her advantage. She fights like an animal, using her clawed nails, fanged teeth and tail. Also may use her hooves to step on her enemies.

Fun facts: She has an affinity for Alastor. She is a woman attracted to power and class. And she wants to dominate that power. 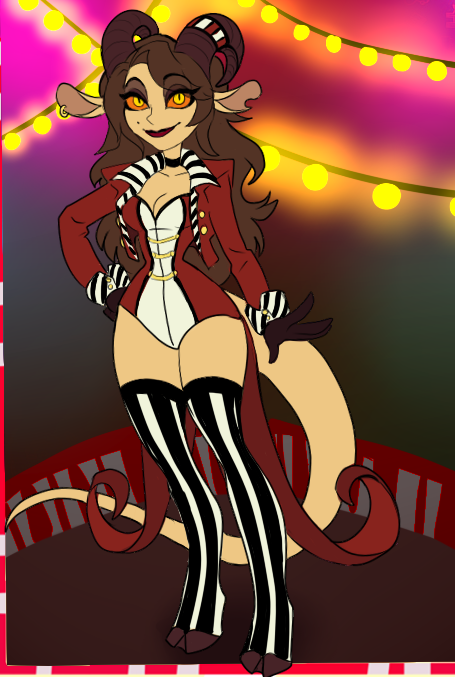 Finally got the adapter and was able to work on stuff. It’s been a while since I drew anything Hazbin Hotel, so I figured a Angel Dust pin up would be a good reintroduction to my tablet.

Couldn’t decide on the background though, so have three.

Finally got the adapter and was able to work on stuff. It’s been a while since I drew anything Hazbin Hotel, so I figured a Angel Dust pin up would be a good reintroduction to my tablet.

Couldn’t decide on the background though, so have three.

And her scarf: Sal (left) and Meander (right)

Karma: Those huge massive ones that grow to be over 100ft tall! I love climbing them- They’re so cool

Just practice to drawing and it’s look creeping when she bend down.