The ocean teemed with news of stuff– surface-stuff!

Tales of ships and sailors, competitions and curses, captains and crew bubbled from reef to reef. Whenever Surface-Stuff happened, it always trickled down to the undersea for Nemo to find. He whizzed his way toward the shallows and poked his head above the water, and sure enough, he saw a trail of abandoned barrels bobbing on the waves, like footprints leading back to land. He’d dived back down and told Finn all about what he found. “I think something’s gonna happen!” he said excitedly. “Should we check it out?”

A couple of hours and here Finn and Nemo were: on the reef outside of Swynlake Port where several ships were docked.

“Wow, what do you think everyone’s doing here?” Nemo whispered to his friend as he gazed up at the looming shape of one of the boat’s sterns. Then he grinned and looked at Finn wickedly. “Dare me to touch it!”

#bpospara, #bffs, #HE TOUCHED THE BUTT, #i almost called it that should i rename it
6 notes · See All
abuzzingofbumblebeesAnswer

The sound of surprise that admits off the exscout is a high pitched squeak, pedes hiking up before Bumblebee notices who had grabbed his aft. “..U-U-Ultra M-Magnus..! P-Primus I nearly w-whacked you with m-my cane.” He turns around and slumps against the others stomach plates peering up with narrowed optics and a playful grin.

what
what are you doing

“Who knew Olivia would be the one to override Elliot’s attempts to deny access?”

#rami malek, #mr. robot, #elliot alderson, #the mastermind, #he touched the butt, #I do not like the colors this scene had to begin with and found them difficult to manip in low light, #first attempt at a plane-breaking gif and i'm kinda meh because I went the lazy route, #but no one cares! they just wanna see sexy times and I agree, #my gifs
164 notes · See All
tentastic-yu-kiText
#honggu is thriving, #hE TOUCHED THE BUTT, #the gay is really peeking out this comeback huh, #hongseok, #yeo one, #yeo changgu, #changgu, #yang hongseok, #pentagon, #ptg
8 notes · See All
angry-noblemanAnswer

FIRST FIVE ASKS GET A KISS

He lifted Shanice off the ground, because she’s small and he was able to do that with ease, grabbing her rear in the process, and before she could even argue he gave her a firm kiss on the lips and pulled away with a smirk on his face. He’s in a good mood to say the least.

People talk about the challenges of making gifs, but no one talks about the rewards. 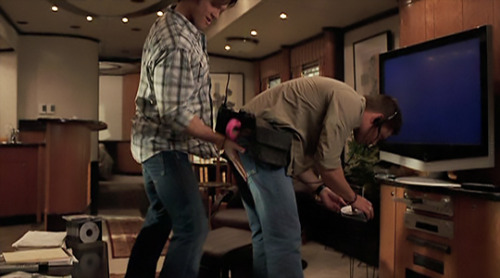 HE TELEGRAPHED IT from a mile away. Arthur doesn’t realize it, but he gets this funny twinkle in his tumultuous eyes before he makes some move on Sam. He thinks if he’s looking away when he does it Sam won’t notice.
But Sam’s never not watching Arthur. And he’s never not expecting him to make a move.

❛ That’s it? That’s all I get? One squeeze?
❛ That’s just unfair, man. Cheated. By my own, loving husband. See if I put out for you tonight. ❜
He shakes his head, all mock indignation, hands on his hips.
❛ Unless you wanna get back over here and try that again. ❜

Love them so damn much…. Kim jongin is that even necessary?🤦‍♀️

#he touched the butt, #the gazes are so damn real, #kaisoo is real fight me if you think otherwise, #exo, #kaisoo, #kyungsoo, #kai, #love, #d.o.
49 notes · See All
madefateAnswer
it started innocently enough; de-cluttering and putting things up into the cupboards under the ceiling. the ladder is old and rickety, so it only makes sense for adam to hold it while takashi climbs up. but then, the position seems to lend itself to a thought or two... and before adam thinks twice, he's reaching up (still making sure to hold the ladder with the other hand), and giving that buttock a firm squeeze, grinning to himself even before getting a reaction.

For as much as it comes entirely and absolutely unexpectedly, what’s more surprising is the strange cocktail of how surprising and still, somehow, familiar it is. As if, no matter what muscles they really are, they haven’t forgotten the time times that were rife with playful touches – little things to garner a reaction, the teasing way he’d stretch to ride his shirt up in hopes of capturing Adam’s attention, stuttered inhales that became tumbling laughter, all of it un-telegraphed and freely, unthinkingly desired. Shiro remembers it, in that moment, but if he’s being honest that only comes after he sucks in a breath against the tingles that erupt and cascade down his spine and uses his free hand to grab onto the top of the ladder.

❛ Shit, ❜ he breathes, expression caught halfway between startled and grinning. He does, though, at least take a moment to make sure that the serving plate he’d been stacking is secure in the cabinet before giving into the laughter – slumping against the ladder, red faced and trying to temper the warm thing that lives in his chest from blossoming too much at the once-familiar, the becoming-familiar-again, sensation of being wanted.

But none of that stops him from glaring at Adam when he has enough of his wits to turn around and lock eyes with him.

❛ Yeah, yeah, ha. Hilarious. Totally not playing it risky today. ❜ There’s no hint of actual admonishment in Shiro’s voice – maybe just the edge of a whine working its way in between each word, clinging to the edges. And his expression is much the same – flushed, lips drawn into as much of a downward turn as he can manage, eyes narrowed in a pale facsimile of ire. When he climbs back down he doesn’t drop to the ground – he merely rests on the bottom rung, using the artificially gained height to lean down, casting a heavy lidded gaze at Adam before reaching out to poke him square on the tip of the nose.

❛ Rude. ❜ But then he can’t help it anymore – the smile pulls at the corner of his lips, a little wolfish and a little awed in the way he always, always is in Adam’s presence. Then he’s moving, bracing his hand against Adam’s jaw and drawing him to lean in, seeking his mouth with his own – then gently, carefully, teasingly, Shiro catches Adam’s lower lip between his teeth.

I’m sad that [Taylor is touching the butt] is in the less interesting path of choices.

The first time i read this chapter was intense! I was soooo into the story i think i was ignoring my kids. Anyway, here’s how my mind was working as i read. In gif form, for your amusement:

His hand strays from her shoulder, ghosts up her neck, her jaw, the until a heavily calloused thumb traces the shape of her bottom lip. She feels his fingers curl beneath her chin. His warm whiskey eyes latch to hers.

She has only done this once, initiated an embrace, but she hopes she has learned enough to allow it to stick. She hopes he wants her this way.

He pulls her closer, hip to hip, but it is still not enough. Her skin burns through her clothes. The hand on her back strays to her side and pulls. She cannot resist and before she knows it her legs swing up over his lap as her hands clasp the iron bar of his neck trying to draw him closer. Her neck cranes as far back as it can forcing her to gasp into his mouth, and at this new angle she realizes that though she is small her size does not matter.

His hands stray, restlessly charting her back and sides. She can hardly feel them through the confines of her clothing but she can feel that yes. Yes this is something he wants. He wants her.

She has never thought that people may have their own taste but she knows now they do. He tastes like metal and minerals and fire. He tastes like rich earth and rain and rare thunderstorms.

His hand stray past proper boundaries, clenching, and the sensation of it is too much.

istg the first time i read this chapter i was sofa king INTO IT and then i read that line and immediately thought ‘he touched the butt’ and i came to a jarring stop and laughed out loud at the sheer inappropriate idiocy of that random thought.

i love this fic, its intensity, and its amazing author. And i will always reread this chapter and whisper ‘he touched the butt.’

#Wandering Hearts, #he touched the butt, #lmFAo!!, #you're welcome
7 notes · See All
drakecaggiula91Text 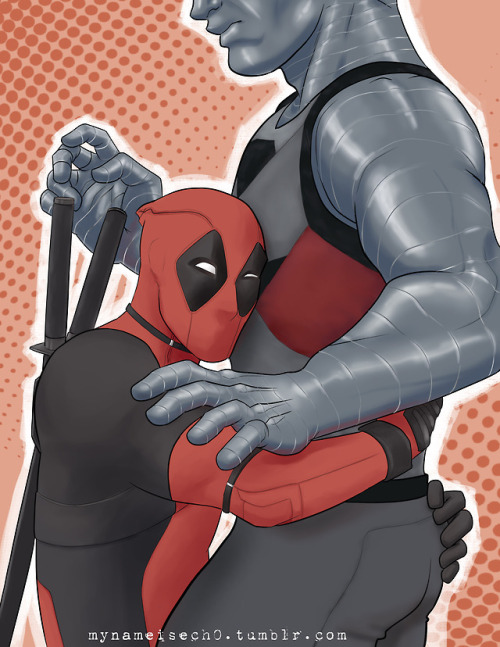