If I was in the Triwizard Tournament:

There is one thing that I’ve never understood about the wizarding world. Mudblood is supposed to be this awful derogatory slur, right? I equate it to the f-slur for gay people or even the n word. But it’s pretty widely accepted in our society that you can’t say those words unless you are a part of the group the word is used against. I don’t understand why the same doesn’t apply to the wizarding world. Because non-prejudiced witches and wizards have no qualms about saying it as long as it’s not targeted towards someone. I feel like only muggleborns should be able to say it. This is just something I’ve been thinking about.

No one can change my mind-😗✌️

if i was hermione i would have so many friends related insecurities- i don’t know how she does it, like, i’d be constantly asking myself “do they actually like me or they just want me to do their homework? do they actually enjoy being around me or am i annoying them constantly?” you know, the kind of things i ask myself even tho i don’t have friends

We all already knew how powerful a witch Hermione was, but this just proves it even more:

In the Half-Blood Prince film, during Quidditch tryouts, Hermione literally Confunded Cormac McLaggen. Without a wand! She just looked at him and whispered under her breath! Like, that’s really powerful! Why is no one talking about this? Isn’t that something that Dumbledore himself can do??

The same person who said they liked Bellatrix torturing Hermione also compared it to Molly Weasley killing Bellatrix without looking at the context. Bellatrix was trying to kill her daughter and Molly’s attack was an act of protection. Of course we are going to look more favorably upon a mother protecting her daughter than we would a woman torturing a teenage girl just because she views the teenage girl as a lesser being because her parents are muggles. The world isn’t black and white, so not all situations should be treated exactly the same way. 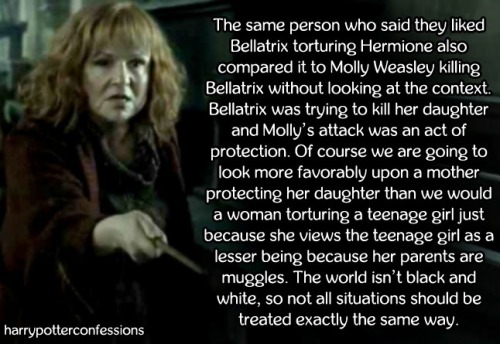 Hermione Granger scoured the subreddits, perused the checklists, and read virtually everything possible on how to be an all star Congressional intern and staffer. She had her job responsibilities well in hand, but instructions on how to handle the attention of an upstart Congressman Draco Malfoy were nowhere to be found.

What happens the day after the Masquerade Ball?

Summary: Harry has a long time crush on Y/n, maybe nows the time to put himself out there to her. After all she needs comfort during a time where she could lose her brother.

“How’s Y/n doing?” Harry asks Hermione as she sat across from him and Ron at the Gryffindor table.

“As well as she can. She’s afraid with the tasks getting more and more dangerous that she might lose her brother.” Hermione explained with a saddened expression, clearly worried about their friend.

“No, wonder he didn’t tell her he was putting his name in. She looks like she hasn’t slept well in weeks.” Ron grumbled which made Hermione kick him in the shin under the grand table.

“Is there anything I can do to help?” Harry asked very concernedly

“Oh shut up, Ron. It’s sweet.” Hermione scolded the red-headed Weasley boy before turning towards Harry. “Harry you really have a crush on her. You have for a while now. Even though you’re also in the tournament she could use having someone around to lean on right now. This is the perfect time for you to make a move.”

“I should” Harry nodded in agreement

“You should” Hermione agreed

“I should” Harry repeated

“Yes, you should.” Hermione nodded as well

“Then stop talking about it and go do it!” Hermione snapped at the boy who just kept working himself up with no follow-through.

“Right” Harry nodded one last time a little bit more confident this time. “Where is she?”

“Thanks” Harry spoke quite quickly as he got up from his house table and headed up to the 5th floor to find his long-time crush. Who isn’t having the easiest time right now.

“Hey, Y/n. You ok?” Harry asked as he approached the Y/h/c hair girl sitting on the floor with her knees up to her chest.

“You don’t have to be strong in front of me. I can tell your upset. It’s completely understandable.” Harry spoke softly, moving to sit down next to her. Leaning back against the wall, hoping to help Y/n feel better. Or at least comforted. So she could talk to him and let off some of her stress.

“I’m just so scared to lose him, ya know? He’s my brother, he’s been there my whole life and the thought that at any moment during this tourinament I could lose him forever is… its hurts unbelievably so. It hurts so so bad. I can’t even describe it. The thought I could lose Cedric in the blink of an eye, it’s horrifying. That I might not get to have him around ever again. Or he could even get hurt permanently.” Y/n exhaled not having realized how much that had all been weighing on her. “I feel so ridiculous.” She let out a week laugh.

Harry moved to bring into a side hug for comfort. “You are not being ridiculous. You’re worried about your brother. You should be, it’s ok to worry about him.”

Y/n leaned into him and stated softly. “I’m worried about you to.”

“You are?” Harry asked turning to look at her.

“Yeah. Harry, I kinda have a long-time crush on you.” Y/n nodded looking down to avoid eye contact. Feeling a bit shy about her statement.

“Wait, really?” Harry was shocked to say the least.

Y/n nodded looking up through her eyelashes at him. “Yeah. Sorry if I ruined our friendship.”

Harry shook his head in a ‘no’ motion with a smile on his face. “No, no you didn’t ruin anything. I’ve um, I’ve had a crush on you for years.”

“Wow.” she laughed out with a big smile of relief

“Would you maybe, um be my date to the winter ball?” Harry asked now obviously more confident in what the outcome of asking might be. Since the feelings are out there and all.

hi everyone!! i just restarted as a (mostly) harry potter blog so if you post about/like these harry potter things please reblog so we can become friends (or so i can at least follow you lol)

ok hopefully some people reblog this!!!

Harry Potter is one of the sassiest protagonists ever written with a perfectly humorous and loyal friend named Ron Weasley .

Harry: One word to define Draco?

Ron: Maybe it is the first time I don’t need Hermione’s help in writing an essay

summary: Fred and George are your best friends. a few weeks ago, you were being cat-called by McLaggen. even though you never told anyone about it, George seemed to have found out on his own. and if George knows something, so does Fred.

as you enter the common room, 2 weeks after the incident with McLaggen, George finds your wrist and practically drags you to the opposite end of the room, where Fred was already seated. as George sits down, you give them both a tiny smile, to which they give you a look filled with anger. and… concern?

you look at Fred ask him what’s wrong and before he can respond, George yells in a hushed tone, “what’s wrong, y/n, is that you have been keeping secrets from us! I can’t believe you didn’t tell us!” you didn’t need to ask further. you already knew what he was talking about and as you suppressed a sob, you ask them both, “h-how did you find out?” your voice was shaky. Fred spoke this time, anger written all over his face, “Lee told us. how could you not tell us, y/n? we’re your best friends.”

you try to explain yourself, “Freddie, Georgie, please calm down i- I hexed him right after. I promise”. they ask you what he said and just stand there for a moment unable to find your words. you can feel the warm tears in your eyes threatening to spill. George almost yells at you in anger, “What. did. he. say. tell us right now, y/n!”

chocking back tears, you tell the brothers, “he- he told me ‘to smile more’ and then- then I told him to leave me alone and the-then he- he grabbed m-my- arse”

as soon as those words left your mouth, both Fred and George stood up, clenching their jaw and walked away from you and before you could process what’s happening, George finds Cormac McLaggen and smacks him across the face. before you run towards the fight in process, a hand grabs your arm and pulls you away from the scene.

Hermione. it’s Hermione, Fred and George’s brother’s friend, she asks you, “what’s going on y/n?!” you explain to her everything you told Fred and George. she looks at you for a second and brings you in for a hug, reassuring you that everything will be alright.

that night, no one tells McGonagall what happened in the common room. when Cormac does, the entire gryffindor student body decides to not support him. and McGonagall turns to him, and looks him in the eye with a cold expression, “even if you were beaten up by Weasleys’, they had a good reason to do so” and everyone erupts in cheers except you, Fred, George and Cormac.

before you run up to bed, George finds you and holds your hand, stopping you midway. you speak up before he can, “Georgie, I appreciate it, but you didn’t have to-”

you are cut short as he says, “what do mean i didn’t have to, y/n? I’m sick and tired of him seeing women as objects and it was about time someone stood up to him. I- I will never let you be harassed like that, ever again, y/n.” and before you can think it through, you lean in and so does he, and you both share a passionate kiss. you immediately melt into his arms, feeling safe; because you knew he would keep his word. he would never let you go through harassment ever again.

as you both pull back to draw in a breath, you whisper to him, “I know, Georgie, I know. thank you so much.”

he looks at you with his chocolate brown eyes, filled with concern for you, and whispers back, “I love you y/n”

you freeze in his arms, making him chuckle. as you gain yourself back, you hear yourself say, “I love you, too, George”, your voice full of honesty. and you both share a soft, comforting kiss.

“That has to be the least romantic proposal you could have come up with. Well done.“ Ron/Hermione.

Dramione vague prompt thingy for a story I may never write.

Harry ships them together after studying Draco for the majority of the 7th year. He thinks they will be good for each other and stop Malfoy from joining the death eaters or hating himself.