Lovino: Even if I wanted to, and I’m not saying that I do, I don’t even know where to find him with the festival going on, downstairs. Let’s respect that the man has other things to deal with, right now.

Hahaha, kind of! They formed a mentor-mentee relationship during the Revolutionary War that I can see carrying over to modern day to some extent.

America and Prussia are a seriously underrated brotp.

#have I queued this for exactly 12am? yes#I’m pretty sure this is the only character I’ve ever wished happy birthday to lol#he’s 21 now lol I refuse to accept that I’ll be older than him in March 🙅‍♀️#I feel like I haven’t expressed enough how much I love this man#my queue is full of Gilbert for the day#hws prussia#hetalia
3 notes
bwinkbear
Text

(referenced this line of merch)

Englan wrenching Prussia away to save him from the groping hands of France:

England: Why don’t you take off your shirt?

Please go binge watch the series and write HBO MAX to give us the Galactic: Kids Next Door reboot we have wanted for over a decade. Thank you! That is exactly what my biggest inspiration is. ;w;

If you have no idea what reboot I mean, please youtube: Stop the GKND posted by Numbuh Vine and see what Tom Warburton, Guy Moore, and the original cast had to offer us. Instead we got PPG…reboot….thing. Like fifty seasons of TTG too.

It’s really hard to pick a favorite thing since I have Romerica brain rot, anon. But I think my favorite thing is the potential I see for these two to support and mutually care for each other, whether as friends or romantically. Romano is a character with a lot of insecurities in canon, and America has his insecurities too, even if his are more hidden because of the personality he displays to others. A relationship can’t fix all of their problems, of course, but I do think these characters can find strength and healing through each other.

Some canon examples of how these two care about each other:

I see a lot of these, so I wanted to make one of my own! I am using this picrew and you can make yourself or someone you kin. I went with the kin option using a certain angry Italian, in hopes that he would forgive my sins.

The more I look at them, the more it makes sense. 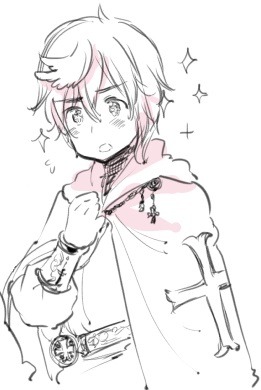 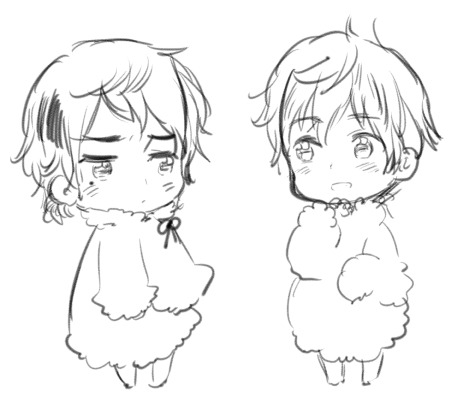 China is not amused. A look of slight annoyance crosses his face as he tells them bluntly to let go of his hand.

Russia squeezes their hand harder, silently letting them know that it is he who is the dominant one.

France is somewhat dramatic about it, making a bit of a show about how they’re hurting his hand. “Agh, my hand! You really do feel superior by hurting people’s hands, huh?”

England immediately gets irritated, telling them in no uncertain terms to cut the bullshit and stop trying to be the alpha male.

America, like Russia, also squeezes their hand. Chances are he misunderstood the intentions behind the the guy squeezing his hand like that and thought they were being friendly at first.

Japan tries to remain cordial but it’s obvious that he’s not pleased; he politely requests that they let go of his hand.

It takes a split second for Germany to grasp what’s happening before he just tells them to stop. He’s not particularly pissed or anything, but he’s not enjoying it either:

Veneziano will let it slide the first time; if this happens again, he’ll be certain to call them out on it in the most uncomfortable way imaginable; something like: “Wow, what a firm grip! You must jack off a lot!”

I’m wearing my shades and I thought Prussia’s hair was a yellowish-orange color for a sec and it gave me a nightmare whilst awake. Such a bad mental image… So horrible.. Unnatural…

Gilbert: Hey, remember that time you dared me to lick the swingset?

Matthew: And then you licked the swingset.

its an acronym for Axis Powers Hetalia 😔 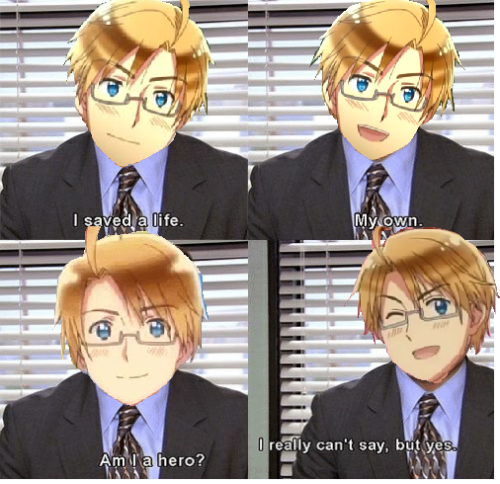 Well I was doing Akinator thinking about Canada from Hetalia and…

My poor baby!!! Even Akinator doesn’t know him! He even guessed his 2p!

What if its plastic? 😲