Fanart based of a scene from the fic:

The wound that would not heal by roguexvi

Tommy: bad news is Billy’s in the ER…

Tommy: even better news, the tacos were free!

Remember when Peter Parker punched Wolverine out of the window for hitting on Mary Jane? Pepperidge Farm remembers.

Pietro: just because I’m dating Remy doesn’t mean I know how I did it

#xmen, #avenger, #avengers, #endgame, #house of m, #scarlet witch, #wanda maximoff, #pietro maximoff, #x men, #xmen comics, #magneto, #professor x, #charles xavier, #erik lehnsherr, #fuck marvel, #mcu, #thanos, #quicksilver
52 notes · See All
thehollowprinceAnswer
Is there any X-men you can't stand? Like, you want to erase them from the lineup? Outside the X-men what is your favorite superhero team-up? Do you have any controversial opinions on the X-men?

Hands down it has got to be Logan Howlett.

I don’t have anything personally against the character, I even enjoy him from time to time, I’m just so fed up with Marvel’s insistence that he needs to he in everything. That he has connections and a history with everyone and everywhere. Its aggravating.

He either has a long lost child or clone show up out of nowhere, a government conspiracy surrounding him, Japan, something involving his dark past (“I’m the best at what I do and what I do isn’t very nice” - yawn!), or he broods.

Yes, I’m simplifying it a great degree, but that’s the gist of what Logan gets up to in the comics, when he isn’t barging into someone else’s storyline and getting the girl because he’s all manly and animalistic and blah blah blah.

It gets to be a bit much.

Moving on to the other questions.

Outside of the X-Men, do I have a favorite superhero team? That’s tricky and I could easily exploit a loophole to talk about how awesome the New Mutants are (they really are - I’m a big fan of their current lineup) but that feels like cheating because they’re comprised of mutants and technically an X-Team, so I’ll bypass them.

Outside of the various X-Teams, I’d say it’s a toss up between the Young Avengers and the Runaways.

These two teams came about when I was a teenager, so for me they were instantly more relatable and likeable than the older generation of superheroes, and they both have such interesting backstories. I mean, the Young Avengers are a bunch of random kids (some powered and some not) who all turn out to have some connection to the original Avengers and come together at a time when their older counterparts had disbanded. Whereas the Runaways are all the children (or creations) of a group of supervillains, and the moment they found out who their parents were, they bailed and did their own thing.

There’s actually a pretty cool crossover event between the two teams at during the shitty comic Civil War that I recommend reading. The art style alone in that comic is probably one of my favorites.

Aside from them, I’d say my favorite team is Alpha Flight

But once again I feel like that’s cheating because Northstar (first ever openly gay superhero!) was a part of the X-Men more than once. And then of course there’s the fact that Logan was once a member of this team. (Sensing a theme? If there’s a superhero team, Logan was probably on it.)

Controversial Opinion regarding the X-Men?

Uh… they were right? They are right? They will always be in the right when it comes to fighting other superheroes because they’re always fighting for their own survival while the others are fighting for some political agenda or religious belief.

I also really liked the House of M storyline. I know people had their issues with it, and I do recognize its flaws, but it was a comic where mutants lived in a Utopia where they weren’t persecuted or hunted like animals. And then Logan (surprise surprise) fucked it all up.

I think that’s why I like the current run of the X-Men, since House of X/Powers of X, because we now have the sovereign nation of Krakoa for mutants and mutants only. Old grudges have been put aside, enemies have become allies, and they’re all dedicated to the protection and advancement of the mutant-race. I know it’s inevitable that it’ll all blow up in their faces (it’s already started) but I’m gonna enjoy it while I can.

This piece means something to me. I really tried to take my time and do something a bit more detailed and meaningful. Storm is Kenyan and i wanted to reflect that, i also love her tiara lol.

In marvel’s House of M series Storm is a world leader and she never joins the Xmen. She retains her royal status and helps free Africa from the turmoil. I like Storm in that role!

I wanted to depict her with somewhat Kenyan looking fashion while still adding my own flare, fashion isn’t my forte but i think i did good. I like gaudy jewelry on her and the tiara that was originally designed for her, i just put my own spin on it.

I plan to do more pieces of Ororo looking more Kenyan! This was fun

Erik: give it time it’ll eat at you.

Pietro: lorna am I stupid?

#maximoff family, #house of m, #magnus family, #xmen, #avengers, #incorrect quotes, #pietro maximoff, #quicksilver, #erik lehnsherr, #magneto, #lorna dane, #polaris
55 notes · See All
pencilscratchinsAnswer
Ooh please could you do either Wanda or Billy in 13, or perhaps Tommy &/or Kate in 1, 2 or 16? I'm not an artist so I have no idea which palettes are best, sorry!

okay lowkey, this the perfect palette for billy though!  // ko-fi // twitter

#snarkylittlespeedster, #tommy shepherd, #speed, #x men, #art, #my art, #young avengers, #color palette, #art response, #i forgot how much my tommy n pietro look the same and then i remember thats literally by design LMAO, #i love these boys i need to draw them more, #House of M
230 notes · See All
kuwtmfText

“There was a strict “no pets” rule when I was younger. Funnily enough that didn’t include old Dad’s high horse, which made regular appearances.” — Lorna Dane

Wanda: I just want to hear those words. Those three words.

Tommy: I love you

Tommy: I will behave.

I got super bored so enjoy these Young Avengers alignment charts

Like um..you committed genocide, Wanda? You literally caused the deaths of countless Mutants? I don’t know why you expect other Mutants would hold back in a fight against you…

House of M (Secret Wars, i think) I just chaged the quotes…

I just redrew it, they all have original artists!

I just wanted to draw something during exam period and well…

So where’s Polaris now? I only saw her in House of X I think.. I love Polaris and loved All new X factor but ah well they stopped printing… I was kinda enjoying the sibling moments but here we go, retcon

The Maximoffs really got a thing for royalty 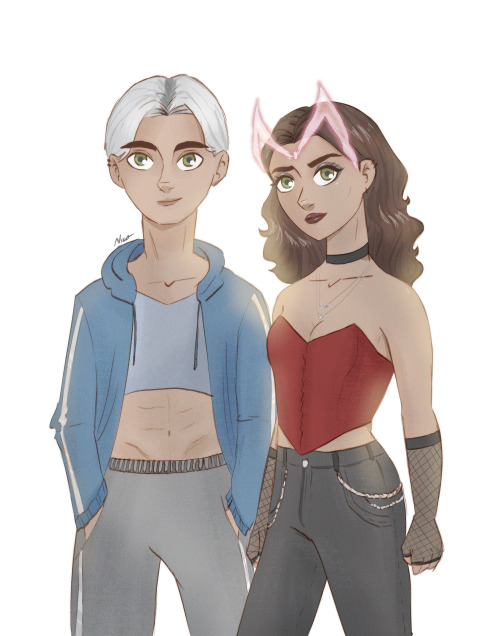