This man suggested injecting disinfectant into the body. Universe please rescue us from this moron🙄🙃

#trumpvirus, #impeach him, #why is he like this
0 notes · See All
united-we-stand-politicsText

Bernie Sanders’ Base is CRAZY

I was thinking that it may be beneficial to have a conversation about what’s been going on within Democratic politics here lately. Considering that many of Bernie Sanders’ supporters turned around and voted for Trump in and of itself is something that I have a serious issue with, and is why I would NEVER vote for Bernie Sanders. Secondly, his supporters ARE similar to Trump’s base in more ways than one. We really need to have a serious discussion regarding a lot of issues that are going on with these folks.

There’s the fact that the DNC bent the rules to let him in the door back in 2016 so that he could run in the first place. He’s NOT a Democrat. A lot of his supporters are NOT Democrats, not that there’s anything wrong with that. I’m not a Democrat either, but at the end of the day, he’s always whining about “the establishment” this, “the Establishment” that. He IS the establishment! He’s a multimillionaire, I mean, give me a BREAK man. The Bernie Bros are a perfect example of WHY his supporters have such a bad name. I’m NOT saying that “all of his supporters are bad people”. They’re not and I don’t make generalizations like that. I’m sure there are good people in there. However, their behavior is not so great. Calling Joe a pedophile, making fun of his speech impediment (stutters), calling them gaffes and shit. Yet BS said that toddlers should run around naked and touch each other. (Pot vs Kettle anyone?) *Giggles* He also has touted Fidel Castro and refused to walk back his comments. His supporters troll groups, and I’ve seen it in just about every group where I’m a member. These behaviors are ALL VERY similar to the behaviors of Trumpettes. Therefore, we have a Trump Base on both ends of the spectrum. We need to figure out WHY. Many of them are people who believe in some of the craziest conspiracy shit, like saying that the establishment is rigging the election even though it was the establishment that let him run IN THE FIRST PLACE. It makes him lose all credibility. I’m sorry, but for all these reasons and SO MANY OTHERS, I will NEVER vote for Bernie.

MANY of BS’ supporters have some serious issues and they proved that when they went for Trump. All because they were BUTT HURT that the “Free Shit Guy” didn’t win. He didn’t win for a reason. Do you see Medicare for All in VT? Do you see free college in VT? Do you see free ANYTHING in Vermont? NO! And if you believe he’s going to follow through with all this free shit, then I have a bridge I wanna sell you that Mexico will be paying to build. Hehe

It’s disgusting to me to be completely honest. I believe that BOTH of these groups are people who wouldn’t otherwise be voting. You can’t tell these young people anything these days. They hear “free shit” and it attracts them. They don’t realize that they’re being lied to. This is a guy who will literally say and do ANYTHING to get elected, just like Trump. There’s not ONE of those “free” programs in the state where he’s been running shit since the 1960’s. If he can’t, or won’t implement these changes to his own STATE, what makes people think he can or will do it for the whole country?! This is right where you see the similarities between both groups. They’re honestly the exact, same group of voters. They’re just split when it comes to which candidate they’re gonna support.

Joe has a stutter, and BS supporters and Trump supporters alike REPEATEDLY say awful things about him that aren’t true. Just because he has a stutter doesn’t mean he’s stupid or crazy. It just means he has a stutter. So what’s Trump’s excuse when he slurs his words other than the fact that he’s addicted to speed? Yeah, that came out too. And what’s Sanders excuse for when he fucks up?

Joe Biden is actually a really good person. People are going absolutely INSANE over him winning the nomination. They’re terrified of him, so they make up a bunch of CRAP off the top of their heads, with no basis to their claims. In the end, THEY are the ones who appear crazy to any sane person.

That’s where speaking the truth gets you. Fired. #ftonerdtalk #politics #fired #impeachment

Y’all can throw this whole Country away.

Today will be recorded in history as either the failed attempt by an aging faction of fascists to unite America into a totalitarian empire under President Trump, or the day they succeeded.

I suppose which happened today is what comes next, and what we do.

Just like that he gets away with what he did. Only way I can truly feel about this is disgusted. #ftonerdtalk #politics #improvement #senateimpeachmenttrial #senate #impeachment

I’m watching the impeachmeant vote rn and the rich white dudes back at it again fucking up the country for all of us so happy wednesday bitches trump isn’t gettin acquitted.

#donald trash, #fuck, #impeach him, #impeachmeant trial, #they fuckin up shit for ALL of us, #like, #he was an ASS president and yall really ou here sayin he aint guilty
19 notes · See All
thefanslayerPhoto

A beautiful exhibition of morals over political affiliation… 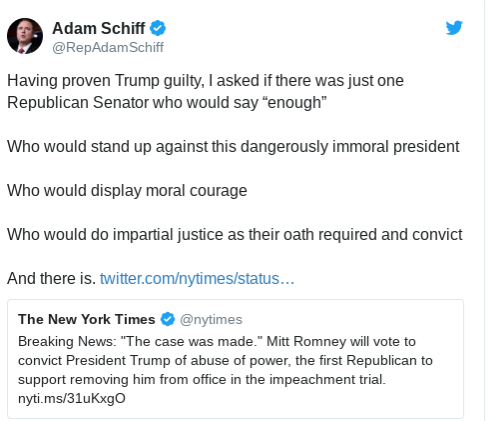 First of all, fuck you for insulting me like that.

Oh, I got money, you fucks, but it’s not going to any red hat wearing, racist ass, oompa loopa body ass bitch.

How is there no way to report or block this ad? What the fuck?

The trump impeachment trial will be so valuable to history, evidence and facts against a rich persons team of seasoned shark lawyers who know exactly how to make a defense case out of nothing…scary

I wish I found this sooner, but nevertheless hope you had a “little late” Happy Impeachment Pussygrabber President Donald J. Trump! #GetYoAssOuttaThere

There shouldn’t be a thing such as impeachment. It should be you have the job or you don’t. It’s kind of like your CEO being found out of a massive million dollar theft and hiding up pollution, and you’re like well he’s got a few years to retirement…