brilliant cover by the @newyorker 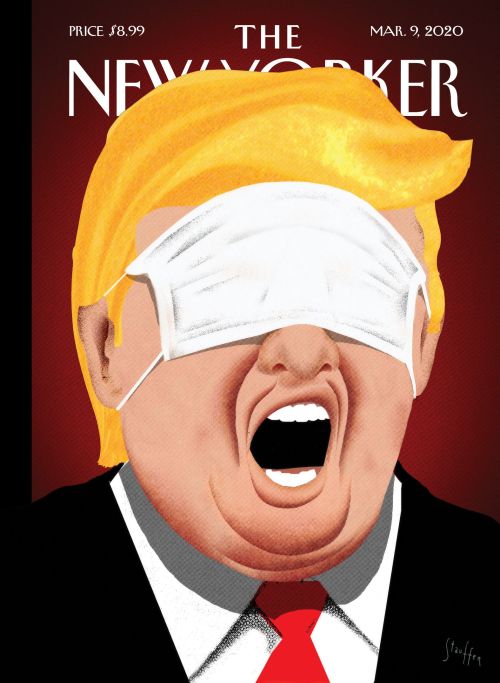 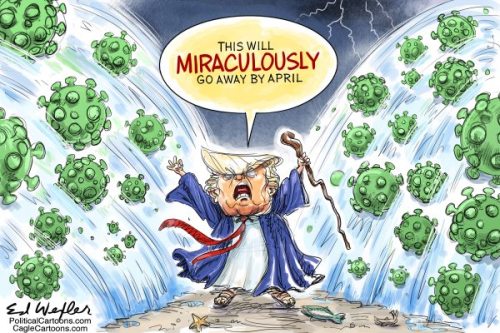 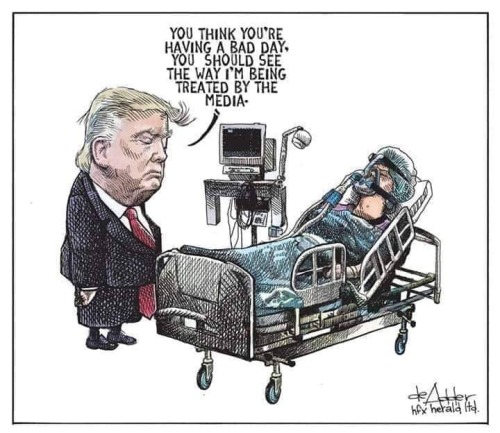 Notice how everyone was so damned focused on the impeachment but now everyone is obsessed with corona virus. I wonder why the government is covering shit up. I wonder what it is they are.

The Impeachers: The Trial of Andrew Johnson and the Dream of a Just Nation by Brenda Wineapple

Notable Quote: “Andrew Johnson was not a statesman. He was man with a fear of losing ground, with a need to be recognized, with an obsession to be right, and when seeking revenge on enemies—or perceived enemies—he had to humiliate, harass, and hound them. Heedless of consequences, he baited Congress and bullied men, believing his enemies were enemies of the people. It was a convenient illusion.” 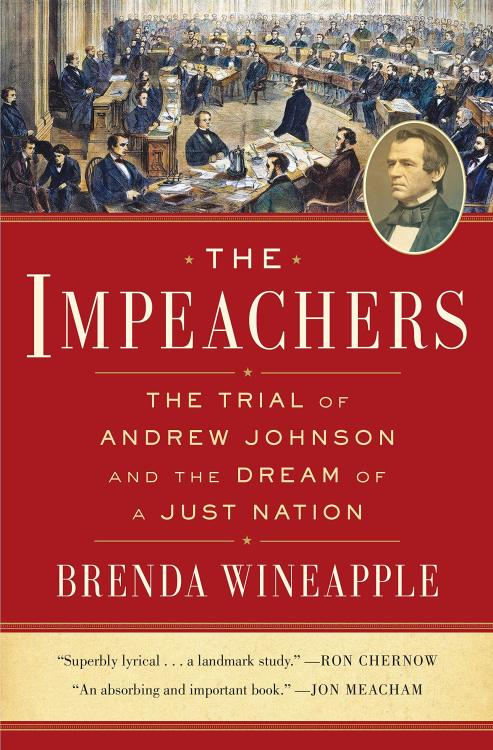 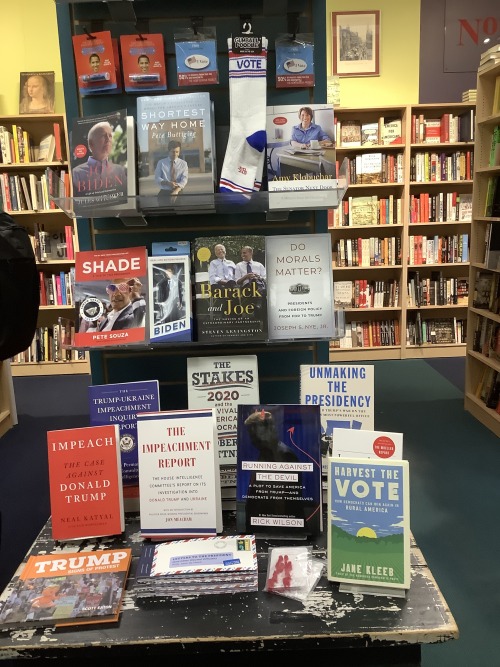 Ok, so if blackmailing a foreign government to start opposition research into a political opponent isnt impeachable….

…what about “defunding and refusing testing for thousands of Americans who may be infected with Coronavirus in order to keep official statistics low in the hopes of pumping up the stock market”?!

Donald Trump acting as a puppet for a foreign dictator and then getting impeached for doing so is not.

There’s only ONE WAY to go after a drop like yesterday’s. While an 1,100 point gain is GREAT news, it’s not as great as most people might think it is. In order to break even just from yesterday’s numbers, +2,014 gain points would be needed. Then you have the other THOUSANDS of points that it had fallen in the few days and weeks before that. Therefore, if we don’t have an 8,000 point gain in one day it’s not breaking even, which is more than we can hope for at this point. I’m just saying…. I give credit where credit is due but I also do NOT give credit when it is not due just to stroke the ego of this Emperor With No Clothes. By the end of the day, the stock market fell again and closed in the negatives.

Impeachment proceedings against presidents are rare occurrences. We just finished the third impeachment of a president in our 250-year history.

Both Johnson and Trump were unfit presidents who were impeached. One rose to power due to the assassination f a president, the other rose to power riding a wave of racist backlash against perceived gains by people of color during the Obama Administration.

Because the Emancipation Proclamation in 1863 only freed the slaves in areas that were at war with the Union, it wasn’t until 1866 that all slaves were freed by the 13th Amendment. But for two years after 1866 newly freed blacks were subject to a reign of murder, kidnapping, violence and intimidation that was arguably worse than slavery. This period between 1865 and 1868 was one of the contributing factors to the first impeachment of a President in U.S. history.

In 1864 Lincoln chose Andrew Jackson as his vice-presidential running mate. Johnson, a former senator from Tennessee, was chosen strategically by Lincoln. He was a pro-slavery Unionist chosen to help Lincoln keep the slave state of Tennessee from leaving the Union and joining the Confederacy. Lincoln’s strategy worked, Tennessee did not leave the Union. But his choice of Johnson as a running mate completely backfired.

Called the “Accidental President,” Johnson became president after Lincoln’s assassination in 1865. The first president to ever face an impeachment proceeding and a vote in the Senate, Johnson avoided being removed from office on numerous impeachment articles by one vote.

Between 1865 and 1868 was one of the most tumultuous times in American history. Much of the South lay in ruins. The slave labor-based economy was in shambles.  Four million slaves had been set free with little or no assistance. Defeated Southerners took out their anger on the newly freed slaves. During slavery, some slaves had the minimal protection afforded by paternalistic or self-serving slaveholders, but after 1865 newly freed slaves were truly on their own. Black Americans in the South were at the complete mercy of angry and bitter Confederate sympathizers and former Confederates. During this period there was no rule of law and absolutely no protection for the freed slaves, more than 6,000 murders, unknown numbers of kidnappings and rapes went completely unpunished. Newspaper reports referred to the wanton murders, whippings, rapes and abductions of freed slaves throughout the South as “isolated incidents.”  But the multitude of reports along with pleas from black citizens to end these atrocities inundated Congress.

Johnson, a former slaveholder and an avowed racist, not only ignored the problem of overwhelming violence against freed slaves in the South but went further. Johnson pardoned nearly every Confederate sympathizer or former Confederate who approached him, allowing former Confederates to rejoin postwar society, hold office and reclaim confiscated land and property. Johnson also appointed former Confederates to important posts in the South after the end of the war. Congressman Wendell Phillips railed that Johnson had “restored the property of unrepentant Southern ex-rebels: he’s lined their pockets; he placed as governors men unable or unwilling to take the oath of office, men who encouraged violation of unappeased hatred of the malignant white race to wreak itself unheeded on the Union whites, and on the black race” speaking in Cincinnati in 1868.

Johnson’s position on the South further polarized a nation recovering from civil war. By pushing for the acceptance of Confederate sympathizers and former Confederates back into the Union with no preconditions, he enraged and radicalized the Republican Party. Radical Republicans believed that Confederates and Confederate sympathizers should be forced to recognize the rights of newly free slaves before being allowed to return to the Union. Some also believed that former rebels should be tried for treason and sedition and that former Confederates should be banned from voting and holding public office for 30 years. Those same Radical Republicans led the calls for Johnson’s impeachment.

Congress introduced nine articles of impeachment ranging from violations of the Tenure of Office Act (Johnson tried to replace Edwin Stanton Lincoln’s Secretary of War with Ulysses Grant) to telling General William Emory to disobey the Military Appropriation Act. Johnson was known as a heavy drinker and outrageous behavior attributed to alcohol was a part of his political problems. The tenth and eleventh articles accused Johnson of disgracing the presidential office by delivering demeaning speeches to Congress and threatening various members of the House and Senate, who he called “treasonous” for opposing him.

Trump has inflamed racial tensions and encouraged hate groups (hate groups and hate crimes have increased 30% during his campaign and administration). This has served to re-energize racial hatred in the U.S. and polarize the country just like Andrew Johnson did in 1865. Trump’s failure to condemn neo-Nazi and white nationalist sympathizers and their ideologies is exactly what Andrew Johnson did with the former Confederates, Confederate sympathizers and racists one hundred and fifty years ago.

Even though he has already called numerous elected representatives and members of the press “traitors” and “treasonous” and insisted that some should resign for opposing him and his policies, Trump was not be impeached for these inappropriate comments. Congress decided to limit the articles of Trump’s impeachment to just two: Abuse of power and obstructing Congress.

One hundred and fifty years ago we had impeachment proceedings to resuscitate our Union from a Civil War over the abolition of slavery. Those proceedings were to try to remove a President that was essentially letting the South return to white domination, returning the nation to the extreme polarization that had prompted the Civil War in the first place.

Much like Andrew Johnson did 150 years ago by enabling widespread violence against newly freed slaves and pardoning Confederates and Confederate sympathizers, Trump has attempted to blame the victims of longstanding discrimination and violence, immigrants and Muslims, for America’s systemic problems.

Beyond these parallels with Andrew Johnson, Trump and his administration have publicly invited and encouraged foreign powers to become involved in the U.S. political system, pressuring Ukraine and inviting China and Russia to investigate his political rivals and allowing them to meddle in our elections.

Like Andrew Johnson’s actions in 1865, Trump’s election in 2016 was enabled by fearful white Americans, and his Administration has disproportionately victimized people of color and poor whites. A massive turnout of people of color at the voting booths in 2020 can correct this problem and Trump and the Republicans know it. Republicans and foreign governments’ attempts to suppress voter turnout shows just how important and powerful they think people of color are in changing the political landscape of this country.

Following Johnson’s impeachment acquittal, and the election of Ulysses Grant in 1868, Radical Republicans instituted Reconstruction. Reconstruction enforced black voting rights, by having the military register black voters, and enforced the rule of law in the South. The result was a tidal wave of black turnout at the ballot boxes. For the first time black legislators were elected in the South. Those black legislators began to change the social and economic fabric of the South. Unfortunately, Reconstruction was ended by the contested election of Rutherford B. Hayes as president in 1876, economic depression, and the need to move troops from the South to fight Indian uprisings in the West. After Reconstruction, with federal oversight gone, Southerners quickly and violently moved to restore white domination by suppressing the black vote.

History shows that the parallels between Johnson and Trump are palpable. Now that Trump has been acquitted, Black Americans and people of color should be doing everything possible to make sure that history does not repeat itself. This can only be accomplished in one way: By having a massive voter turnout of Black Americans and people of color in 2020. Voter turnout needs to be larger than it was in 2008. In those states that had Republicans senators who voted for acquittal voters should start campaigns to recall those senators if their states allow it.   If that is not possible people of color need to work to assure that those senators who voted for acquittal are voted out in 2020.

So just like in 1868 and 2008 we must have a massive turnout of voters of color in 2020 to remove Trump and his supporters from office.  Just as in 1868 people of color hold the balance of power during the 2020 election, and voters of color will ultimately decide if America lets Trump and his supporters throw the nation into the malaise of corruption, criminality and racism for years to come just as Andrew Johnson did more than 150 years ago.

It’s #supertuesday2020 … you know what to do. #votebluenomatterwho

What could Jim Berg be saying about Trump’s impeachment?

We know what he said about Bill Clinton in 2001 in “Pardons in the Bible.”

And the BJU Chapel audience roared with laughter. 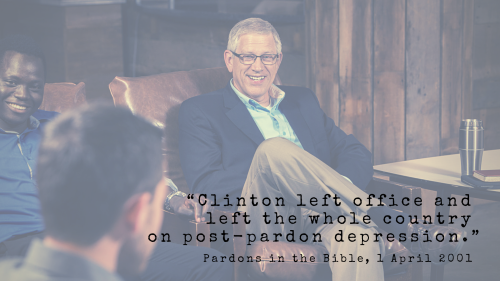